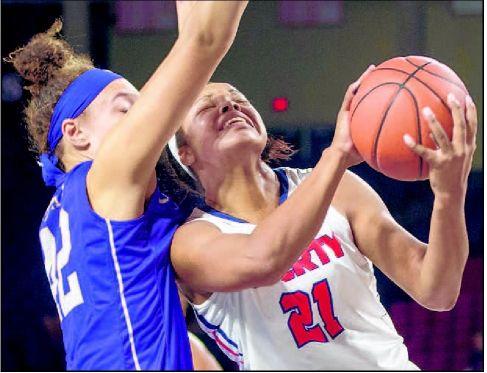 Keyen Green had a fairly simple formula for success during her playing days at Phil-Mont Christian Academy in Philadelphia. The 6-foot-1 forward bullied her way around the block and easily backed down her opponents for shots around the rim.

Green's physical nature was suited for the high school game, but she knew she needed to work on her footwork around the basket so she could be as effective immediately with Liberty.

She is still a work in progress, but her development has come quickly for a team that needed a post presence to accent its new up-tempo offense.

Green leads the Flames in scoring and rebounding through the season's first 13 games and she's posted double-doubles in the past three games. Her contributions inside have been invaluable for a young roster that has turned the corner in Big South Conference play.

"With Keyen, what I think has really helped her get to the next level is instead of overpowering and going through people, now she's developing her feet, making a combo move," Liberty assistant coach Alexis Sherard said. " ... I think she's adding some different post moves to her game, which she came in not having any, and now she has maybe two or three different post moves and now that really enables her to just expand her power game with different moves in the post."

Green has emerged in the past eight games as a viable scoring option and a reliable rebounder. She has scored in double figures in seven games and posted double-doubles in five of those games.

Her recent stellar play has led to back-to-back Big South freshman of the week honors and she's earned three of those awards this season.

"She helps give us a balance," Sherard said. "We don't have the size that we had last year, but she definitely gives us a presence inside that teams have to respect and know where she is."

The Flames have excelled in conference play with Green's scoring and rebounding inside to compliment an improving perimeter game. LU is shooting 22 for 45 from 3-point range in the two conference victories, and the strong shooting has allowed the Flames to find balance.

"I want them to score just as much as they want me to score," Green said. "It kind of takes pressure away from one person when everybody is a threat and I think that's what we've been doing in conference play so far. I'm excited for that."

Green has also diversified her game outside of the post. She has improved her endurance so she can contribute in the uptempo scheme by running the floor well and beating other post players down the court.

There were multiple occasions during last Saturday's 81-74 victory over High Point in which she took off once a teammate got a rebound and she received an outlet pass behind the Panthers' defense for an easy layup.

And she has excelled with offensive rebounding, whether it is in a set offense or in transition when she is able to be in position to corral a rebound and turn it into easy points.

Sherard said the expectation for Green every game is to post a double-double or she is not playing hard enough on both ends of the court. She has accepted the challenge by constantly learning in every practice and film study so she can continue the roll she's been on.

"She's an excellent student, she's a great kid, high IQ, high character, and she's a sponge," Sherard said. "She asks the most questions on the team of any player and she's always looking to learn."