President Joe Biden has been busy during his first 100 days in office. He takes the stage tonight to address a joint session of Congress for the first time as president—but what accomplishments can he tout?

Although marking a president’s progress in their first 100 days doesn’t predict how prolific they will be over their entire term, it’s commonly accepted as a period when an incoming president can set an agenda and start to make ground on their policy priorities.

Here’s where Biden has done well—and where he missed out.

Biden has signed 11 bills into law during his first 100 days. That’s comparable to other modern-day presidents but nothing compared to Franklin Roosevelt, who signed a record-breaking 76 laws in 1933. (Roosevelt worked quickly upon taking office to manage the damage of the Great Depression—and in the process created a tradition of examining a president’s first 100 days.)

But while he didn’t break any records for volume, Biden did make a splash by signing a gigantic $1.9 trillion stimulus package known as the American Rescue Plan Act (ARPA) into law. ARPA’s goal was to continue to aid U.S. economic recovery in the wake of the coronavirus pandemic. That package included a third round of stimulus checks, along with extensions of several pandemic aid programs and additional measures to support the economy.

Estimate your unemployment payment in your state

He was able to accomplish this in part due to the reconciliation process, which limits debate and requires just a simple majority of votes in the Senate rather than the usual 60—though it still came down to a tiebreaker vote by Vice President Kamala Harris.

To make progress on his policy goals without a stamp of approval from a polarized Congress, Biden has leaned on executive orders. He signed 42 to date (nine of them on Inauguration Day alone), compared to 33 by Trump and 19 by Obama. Bush in 2001 signed just 11.

Biden’s executive orders provided an early glimpse of many of his recovery priorities: He extended increases to SNAP food benefits, reopened the health insurance marketplace, and called on state and federal agencies to determine how to reopen schools safely.

Biden’s Promises for the Economy: What Has He Achieved—And What Did He Miss? 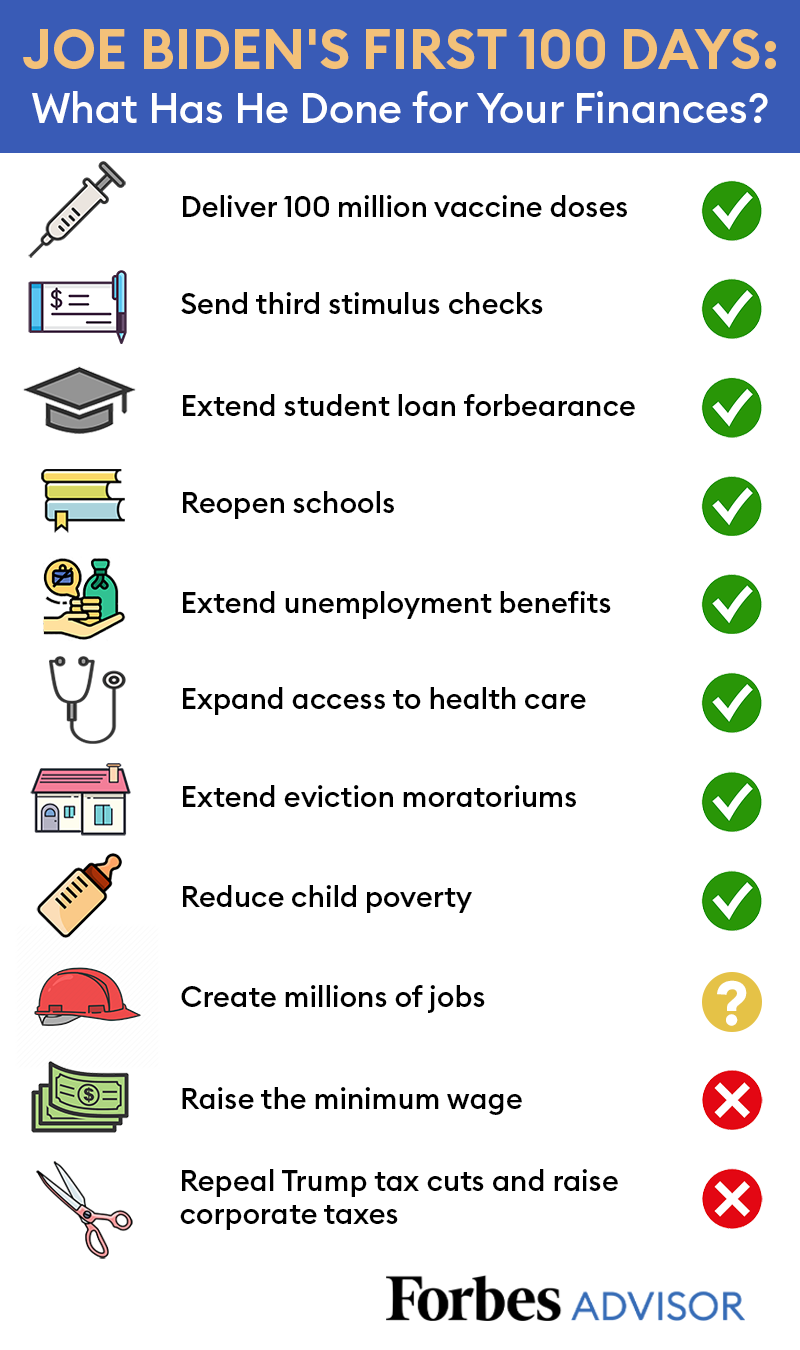 Here’s a detailed look at each of Biden’s initial goals for the economy:

Biden achieved double his goal of administering 100 million vaccines in his first 100 days. The 100 million goal was met on day 58. Biden declared on April 20—day 92—that his revised goal of 200 million doses had been achieved. More than half of U.S. adults have received one vaccine dose; widespread inoculation is anticipated to speed the reopening of the American economy.

Biden asked Congress to introduce a Covid-relief bill by the end of January, that would include checks of up to $1,400 per eligible person (to total $2,000 when added to the $600 payment authorized by Trump in December 2020). The American Rescue Plan Act took more than a month to pass and was signed into law on March 11; the IRS announced that the first payments would be delivered by March 17.

On his first day in office, Biden extended the federal student loan forbearance period through September 30 from the end of January. Student loan servicers will continue to report federal student loans to the credit bureaus as current, and borrowers aiming to have their loans forgiven through the Public Service Loan Forgiveness (PSLF) program will stay on schedule even if they are not currently paying their loans. More than 22 million borrowers had federal loans in forbearance in fall 2020, according to U.S. Department of Education data.

If your federal student loans are in forbearance, be sure to check your credit reports regularly to make sure your accounts are being marked as current. You can get your free credit reports from each of the three credit bureaus weekly until April 2022.

President Biden planned for a majority of public K-8 schools to be reopened for in-person learning in his first 100 days. As of February, 80% of students in public schools that had a fourth and/or eighth grade were attending school in person or through a hybrid model. School reopenings are expected to allow some parents to return to the workforce—especially women, who were forced out of work to care for others during the pandemic at a far higher rate than men.

The American Rescue Plan Act included an extension through Sept. 6 of the $300 per week federal supplement for people getting unemployment benefits from their state. It also extends various pandemic unemployment programs and made the first $10,200 of unemployment payments received in 2020 tax-free.

Biden signed an executive order in January to reopen enrollment for health insurance marketplace plans from Feb. 15 through May 15.

In addition, the American Rescue Plan Act increased subsidies for marketplace plans and caps the annual premium participants will pay to no more than 8.5% of your modified adjusted gross income (AGI). People earning less than about $19,000 per year won’t pay any premiums for their insurance coverage. The provision expires in 2023.

Biden promised to extend eviction protections for renters and homeowners during his first week in office. In February, he announced an extension through June of the foreclosure and eviction ban for homeowners with federally backed mortgages. The Centers for Disease Control and Prevention (CDC) extended its eviction moratorium for renters through June. Housing advocates have warned that the continuing moratoriums merely delay eviction, rather than preventing it altogether.

The American Rescue Plan Act also includes $25 billion in rental assistance to be distributed directly to households struggling to pay rent and utilities.

Biden’s American Rescue Plan promised to lift 12 million Americans out of poverty and reduce child poverty by half. The law passed in March includes a temporary increase for the child tax credit (CTC) that increases the amount families can receive per child. In addition, the CTC can be paid out monthly for half of 2021, rather than requiring households to wait to get the credit via their tax return in 2022. This is a temporary measure for the 2021 tax year, but Biden hopes to make the expansion permanent.

Although Biden didn’t explicitly pledge to create millions of jobs in his first 100 days in office, he rarely misses an opportunity to speak about his goals for job creation.

Biden said shortly before taking office in January that he would introduce his economic recovery plan to a joint session of Congress in February. But the plan was only formally introduced on March 31, and a draft has not yet been proposed in Congress.

Moody’s Analytics, an economic research company, estimates Biden’s American Jobs Plan, which focuses on creating employment opportunities around the environment, renewable energy and manufacturing, could create as many as 19 million jobs over 10 years.

When it comes to Biden’s immediate performance, Moody’s estimated that the American Rescue Plan, if passed as proposed by the president, could create 7.5 million jobs in 2021. But that estimate relies on the law being fully enacted by March. Since the bill wasn’t signed into law until March 11, it’s taking a bit longer than Moody’s anticipated to roll out the aid programs in the plan—which means the jury’s still out for whether Biden has created as many jobs as he hopes.

Raising the minimum wage was a major part of Biden’s campaign promises to American workers.

On Tuesday, Biden signed an executive order increasing the hourly minimum wage for federal contractors from $10.95 per hour to $15. Federal agencies that employ contractors will need to implement the new minimum by March 30, 2022; the minimum wage will be indexed starting in 2023 to automatically adjust it for the cost of living.

Meanwhile, a nationwide $15 minimum wage (which would increase gradually from the current $7.25 minimum wage) was initially part of Biden’s American Rescue Plan. But it was excluded from the final draft of the bill because it didn’t fit into the restrictions for passing the aid plan under the reconciliation process.

Lawmakers on both sides of the aisle bristled at the idea of including a minimum wage hike in the aid package in part due to the burden it would put on businesses that have struggled to stay open during the pandemic.

Biden said he would raise the corporate tax rate on day one of his presidency to undo many of the tax cuts enacted by the Trump administration. Biden has proposed changes to the corporate tax structure as part of the American Jobs Plan he introduced in March. But that plan and related changes have not been enacted.

Biden has called for raising the corporate tax rate from 21% to 28% in order to pay for his economic goals, and is expected ahead of his speech to Congress on Wednesday to propose tax hikes for households earning more than $400,000 per year. He’s also expected to propose raising taxes on investment earnings from 20% to nearly 40%.

What’s Next on Biden’s Agenda

Now that his first 100 days are over, Biden’s focus has shifted to pushing his $2 trillion American Jobs Plan through Congress. It’s a follow-up to ARPA, and includes about half of his plans from his agenda to build up the economy, create jobs and revitalize American manufacturing—all while making moves to slow climate change.

Part of Biden’s plan to pay for his job creation campaign comes down to raising taxes on corporations and the super-wealthy.

But the American Families Plan, as it’s called, has a price tag of $1.8 trillion. Combined with the American Jobs Plan, that’s about $4 trillion necessary to make sweeping policy changes.

Conservatives and moderates in Congress who are hesitant to raise taxes may be the biggest roadblock Biden encounters this year, especially in an economy that’s still recovering from the worst effects of the pandemic.

Senator Joe Manchin (D-W.Va) told CNN last weekend he’s against “raising taxes for the sake of raising taxes,” explaining that he’s for many of the infrastructure improvements Biden has planned but is concerned about around $5 trillion the government has already spent during the pandemic.

And though Biden has been prolific so far, not everyone is pleased with his progress.

What Biden’s free college plan could mean for you

Take a closer look at Biden's American Families Plan and how it could affect your finances. Plus, check out more money tips from experts at NerdWallet, Forbes and the Motley-Fool.

Face your financial anxiety by reframing your relationship to money

How to cut the cost of preventative care

How to cut the cost of preventative care

These are the best tips and tricks for donating to charity

These are the best tips and tricks for donating to charity

How to make room for fun in your monthly budget

How to make room for fun in your monthly budget