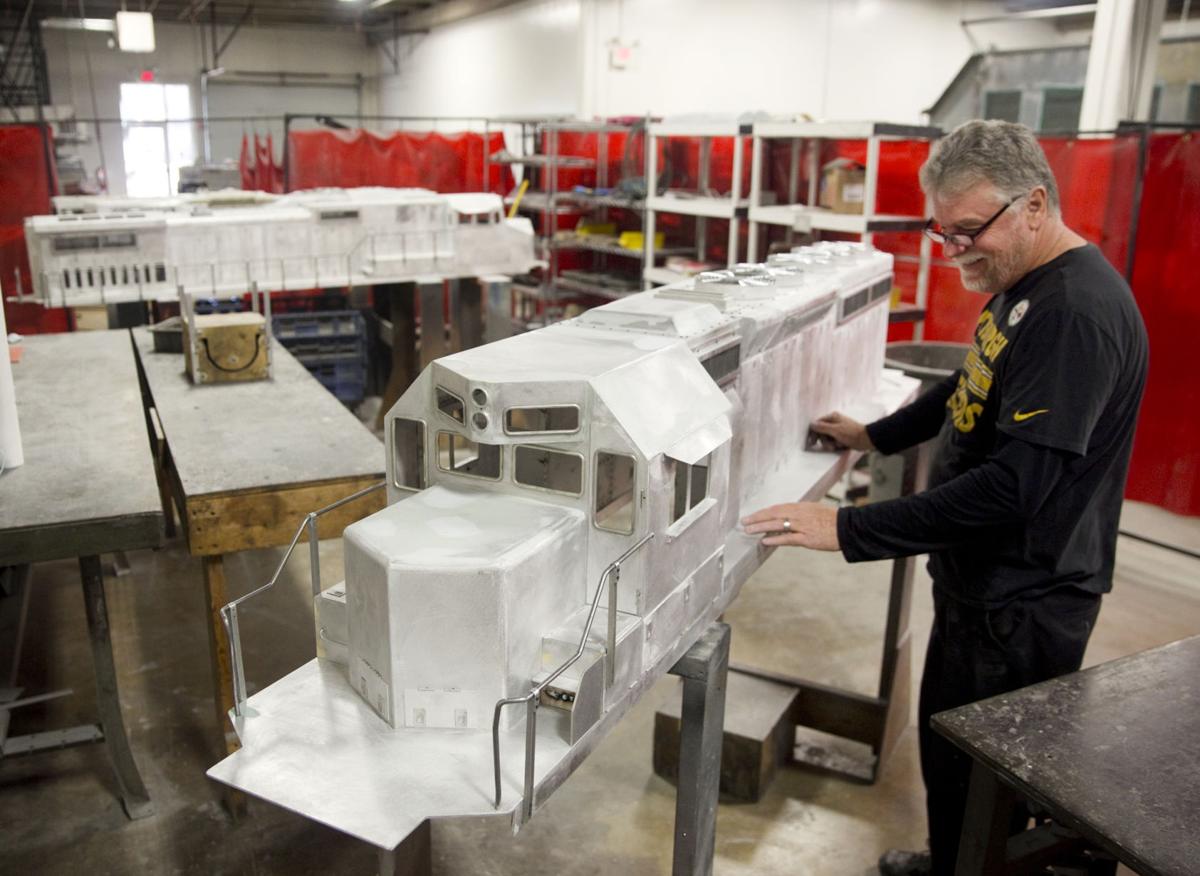 Vernon Hitchcock works on a SD40 locomotive body at Titan Trains, where one-eight-scale train engines, cars and tracks are made. 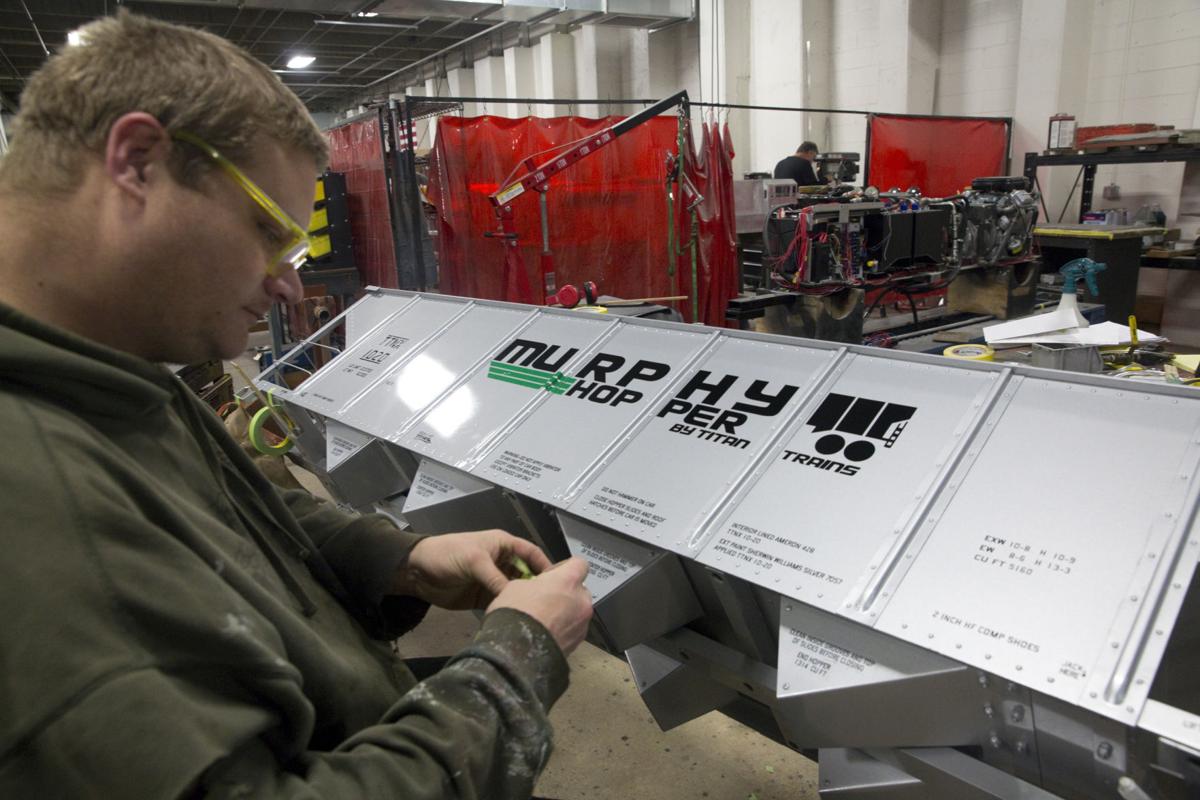 Timmy Boyd puts the finishing touches on a caboose at Titan Trains in Boones Mill. 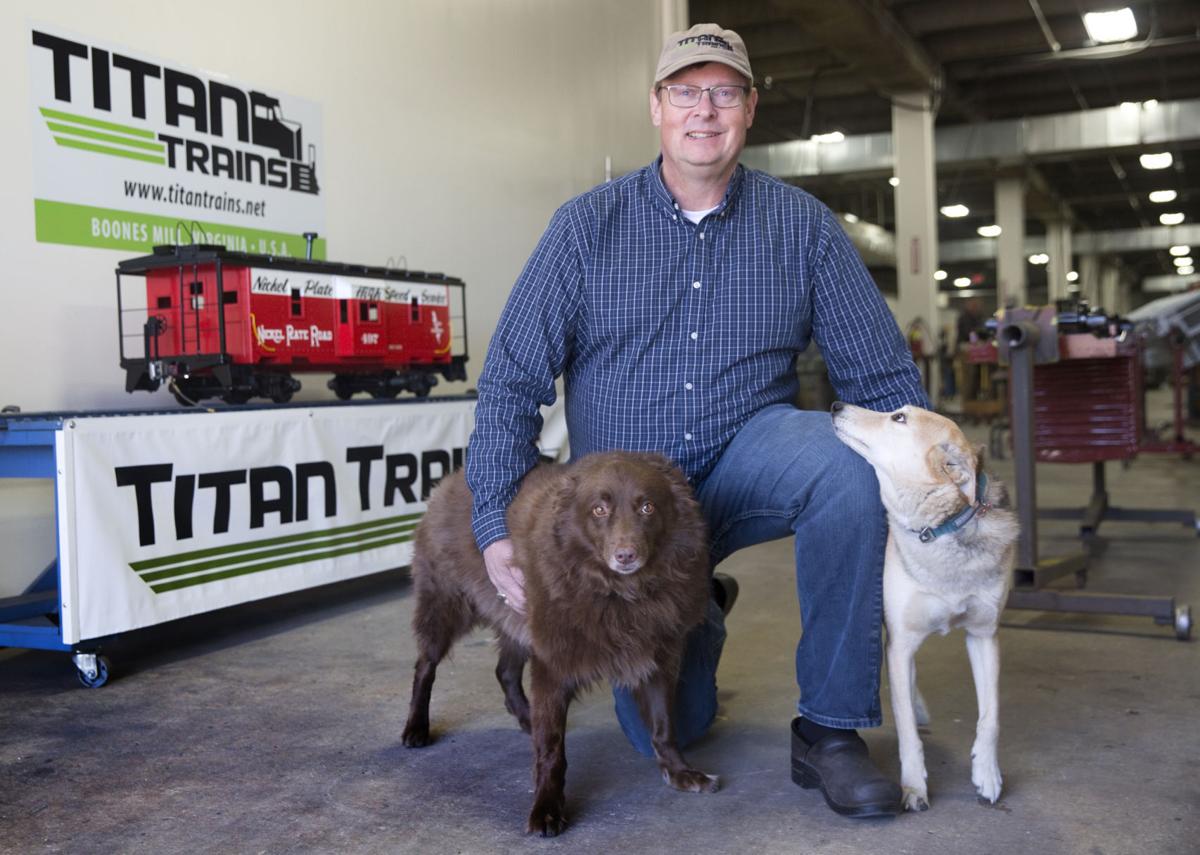 Jim Humphrey, founder and owner of Titan Trains, is pictured with his dogs, Cocoa, left, and Nyla, who join him at the factory every day. The company, located in Boones Mill, makes one-eighth-scale train engines, cars and tracks. 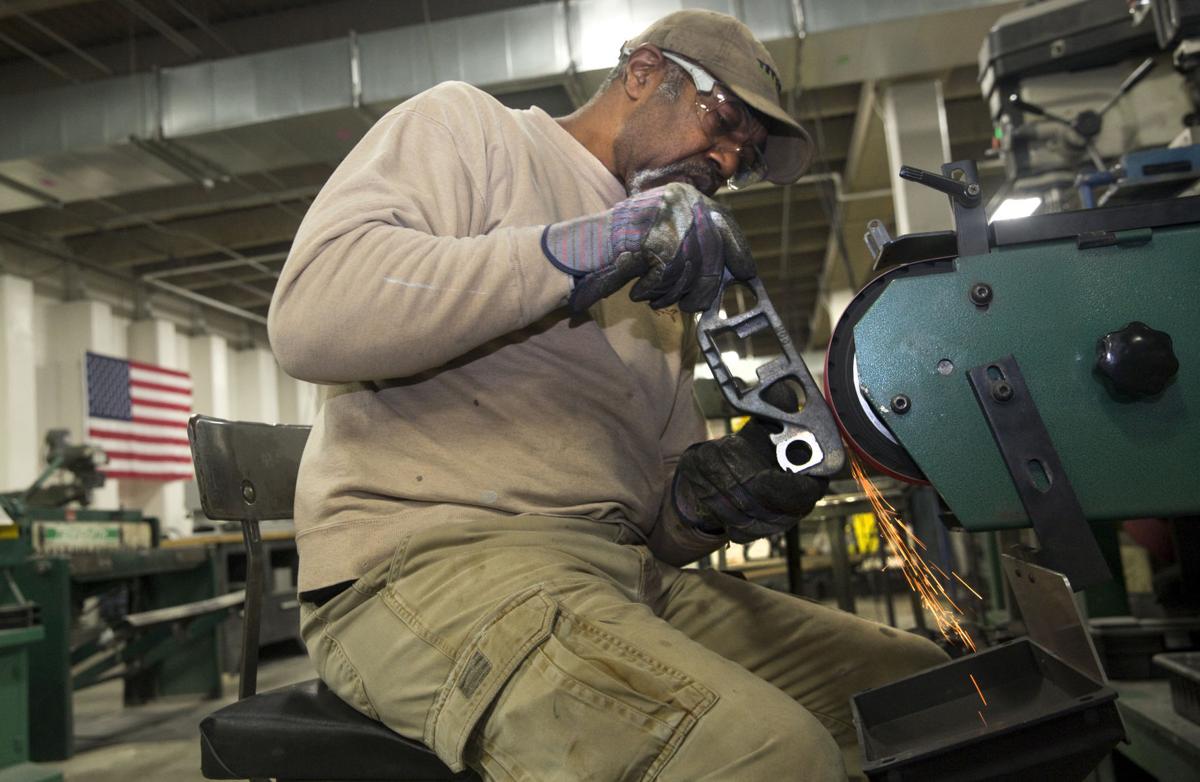 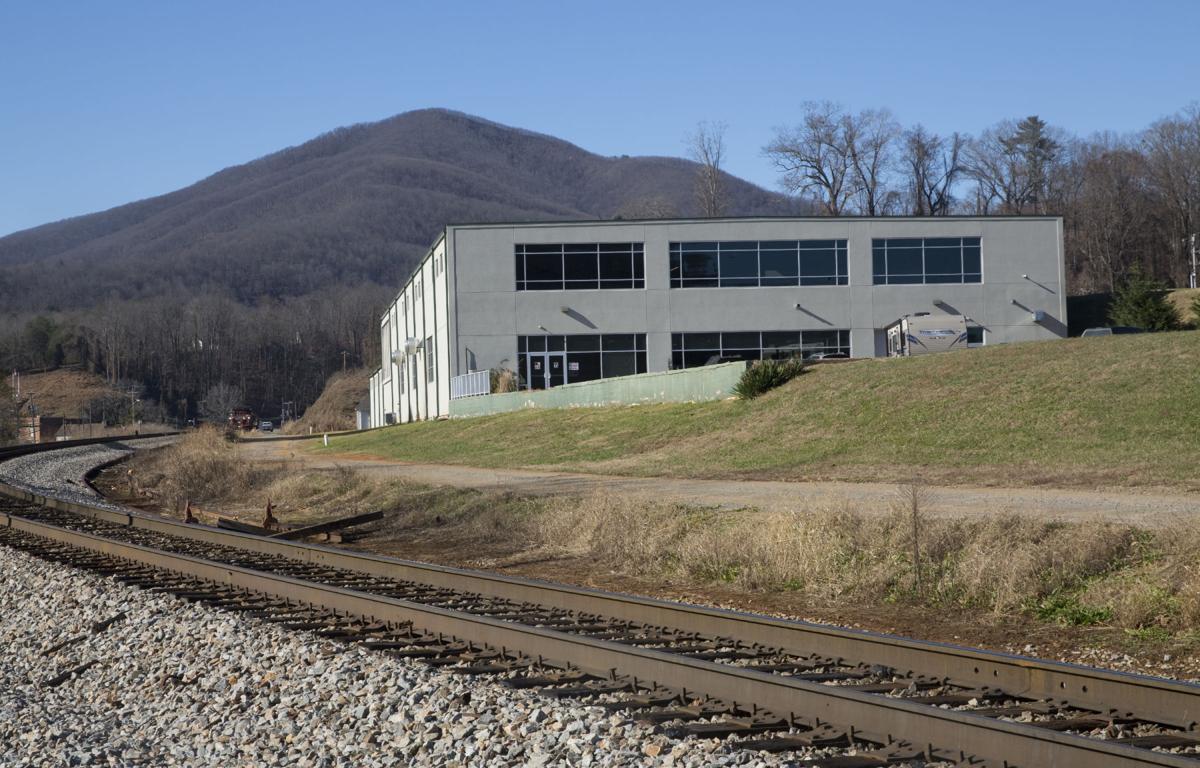 Titan Trains recently relocated to a warehouse in Boones Mill. 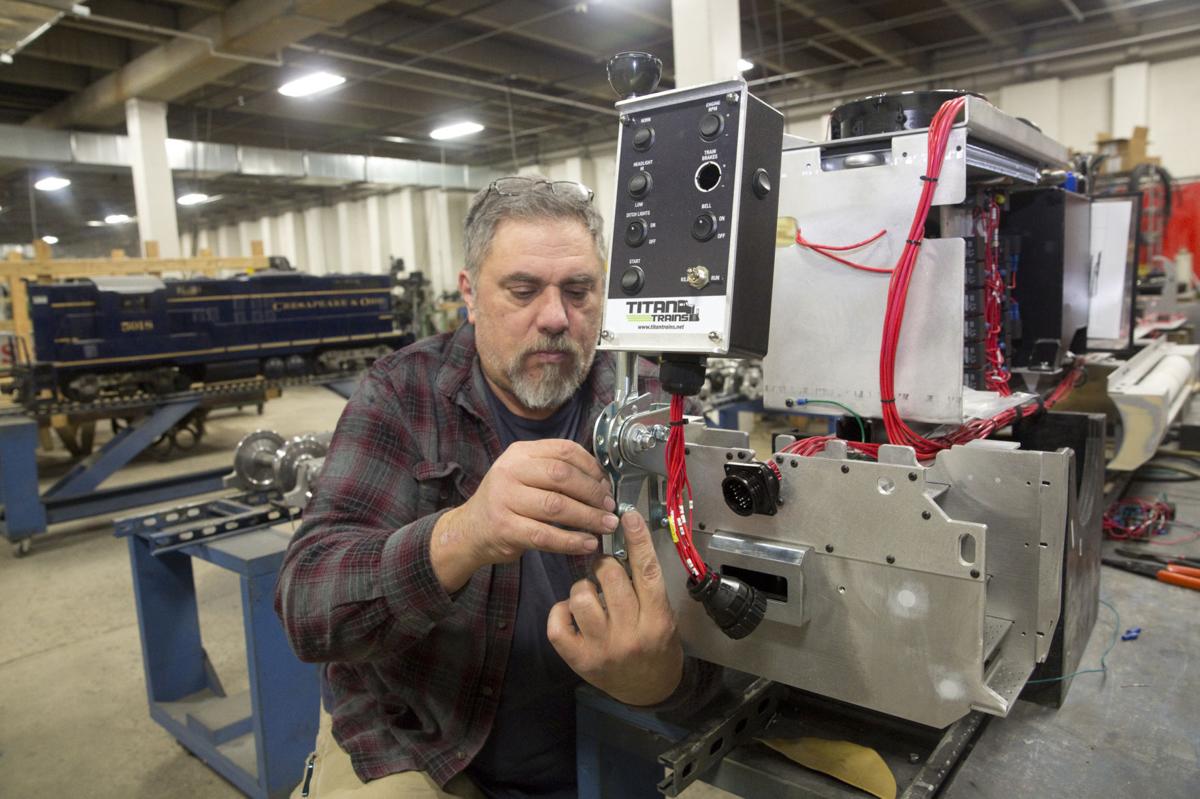 Curtis Hayes with Titan Trains works on the shift and control levers for a Dash 9 locomotive. 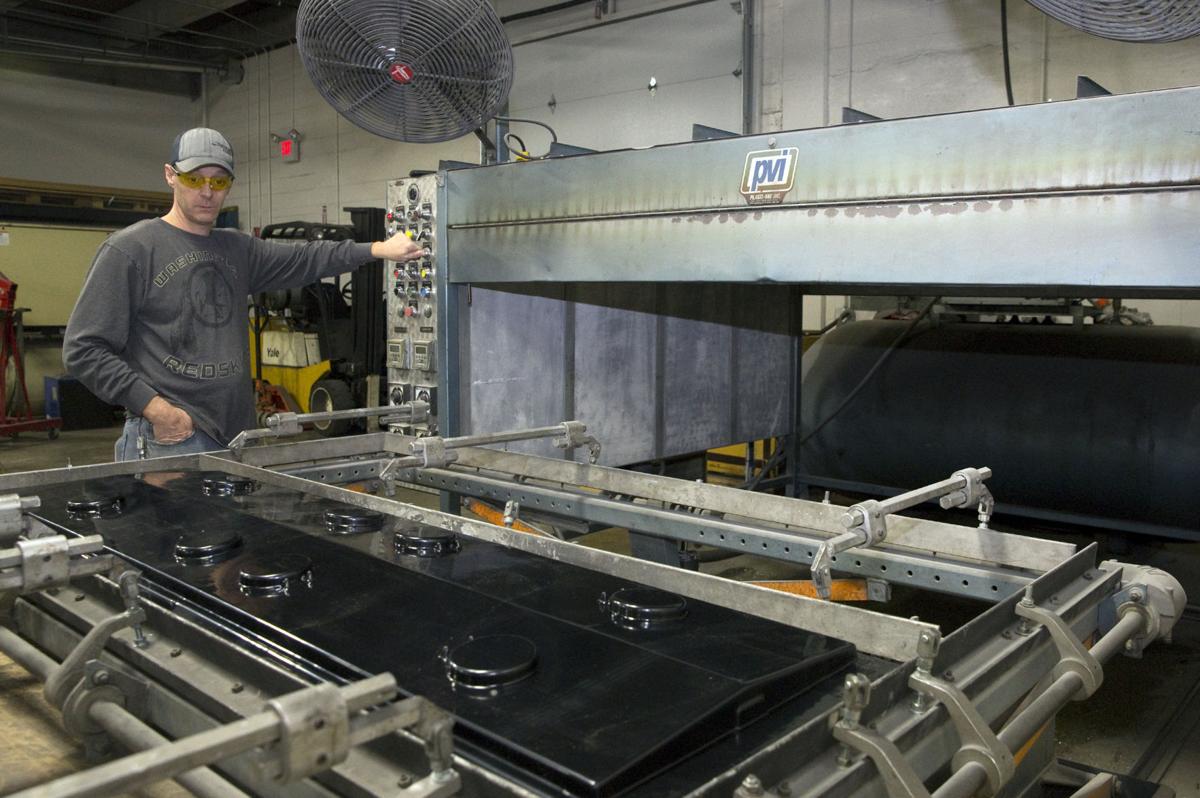 A roof to a Hopper train car comes out of a plastic vacuum forming machine, manned by Steven Blackwell at Titan Trains on Wednesday. 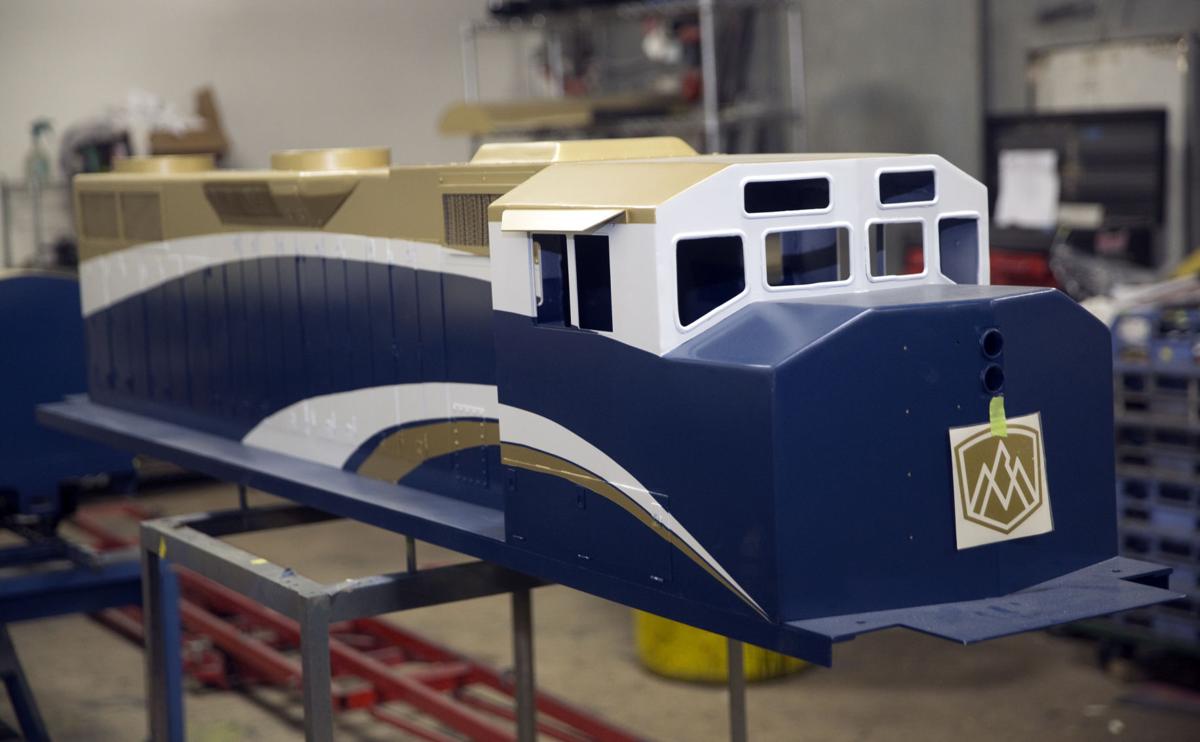 A finished painted product piece by Titan Trains seen in the factory.

The locomotives and cars he coats with shiny colors aren’t full size — and yet they’re way too large to fit on the kind of train set that a child, or a dedicated rail fan of any age, might set up in the basement rec room.

Boyd works at Titan Trains, a small factory tucked away inside a mostly empty industrial building across from the historic Boones Mill train depot, part of a complex that also holds the town government offices.

The business makes one-eighth-scale model locomotives, train cars and tracks. The company also bills its products as “large-scale ride-on trains,” because you can in fact ride on them. A Titan Trains locomotive is comparable in size to a soapbox go-kart.

Though the outside of the factory is unassuming and easy to miss, the inside of Titan Trains calls Santa’s toy shop to mind, albeit with a lot more noise and industrial machinery than what’s depicted in cartoons.

New employee Ken Richmond, 55, said it’s fitting to think of Titan Trains as something akin to Santa’s play land. “I do craft shows, so I’m into all this artistic stuff, and when I walked in the door and saw these trains, I thought, Oh my God, this is me, it’s got my name all over it.”

Boyd, 37, said he didn’t have a particular passion for model trains before landing his job painting them four years ago, “but I really enjoy it.”

Titan Trains has sold its miniature rail products to customers in Europe and Australia. Once in a while the company’s creations have even served as props in Hollywood — and Bollywood — movies, Humphrey said.

Adding to the curious factory’s charm, two canine companions, Cocoa and Nyla, stick by Humphrey’s side whether he’s taking business calls in his office or wandering the factory to check on progress as the train parts are milled, assembled and painted.

The dogs even make appearances in a series of videos, called Titan Talks — a play on TED Talks — posted on the company’s website, in which Humphrey chats with fellow enthusiasts and explains how his factory makes its large-scale toys.

“As a small business we’re doing it all, from design, development, manufacturing, marketing and sales,” Humphrey said. “It has not been easy getting to this point, being on top of our game, but now we are.”

A Roanoke native and Cave Spring High School graduate, Humphrey, 57, said he earned a degree in business management at Virginia Tech “because I wasn’t smart enough to be an engineer.”

As a child he had an interest in trains of all sizes, but he first encountered the type that he designs and makes in 1977 at the Virginia Museum of Transportation, when it was located in Roanoke’s Wasena Park.

The Blue Ridge Live Steamers club had just formed. It operated a one-eighth-scale train at the museum as a ride. “Most anyone that made these trains was on the West Coast,” Humphrey said, “which made it seem even more exotic and expensive.”

After Humphrey started college in 1981, the idea struck him that he could make these model trains himself. He started his business in partnership with George Sanderson, another early member of the Blue Ridge Live Steamers club.

(By the way, the club still tends to a one-eighth model train set with about a mile of track on land Humphrey owns in Burnt Chimney.)

Best known as an advocate for people with disabilities and a founder of the Blue Ridge Independent Living Center, Sanderson died in 2000 at age 73. He was also a train buff, who let Humphrey make use of a tiny machine shop in his basement.

“He was participating fully 100% in the hobby,” Humphrey said. Sanderson, who had lost his legs because of circulatory complications after bypass surgery, “could hop from a wheelchair onto these trains and run them. We’d travel to different parts of the country doing this.”

Salem Vent International owner Timothy Kelly also allowed Humphrey to make use of a workbench — actually a railroad baggage cart — within his Salem factory during Humphrey’s time off from college.

Kelly “was into trains. He was very much into this hobby. He was a big help to the transportation museum back then and throughout his life,” Humphrey said.

When Humphrey graduated from Virginia Tech, “I had to either go into it full time or go get a real job.” He bought out Sanderson, and Kelly joined him as a partner in the venture until 2001. The company eventually moved into a building that once held Salem’s Rowe Furniture plant.

Humphrey says Titan is “the largest of anybody in the hobby” that solely specializes in these types of model trains.

The folks who purchase these trains — a locomotive can set you back $18,000 — range from average-income hobbyists to people Humphrey described as well-heeled. “It does look exotic and expensive, but so are Harley-Davidsons. The common theme is just all kinds of people who just happen to like trains.”

He shared an anecdote about a customer who turned out to be the manager for Chicago — the band — and arranged for Humphrey to get backstage passes to a concert. “That was a cool thing. I found 12 friends. We had front-row seats.”

Until 2016, Humphrey’s enterprise was known as Mountain Car Co. after the Blue Ridge Mountains, but as the main avenue for marketing shifted from hobby magazines to the World Wide Web, “there was a realization that there wasn’t the word ‘trains’ in our name” to pop up in searches.

“It was time to change the name to something that indicated what we were, because otherwise we were a used car dealership,” Humphrey said.

In 2014, with the Boones Mill train depot slated for demolition by Norfolk Southern, the town rescued it. A combination of private donations and grant funding made it possible to have the building moved to where it sits now.

When Humphrey, who occasionally drove through Boones Mill on his way to work, stopped in to check out the depot, he noticed that across the road “they had a ‘for rent’ sign on this very dilapidated building,” he said. “I called the number.” Boones Mill officials were extremely welcoming.

Humphrey moved his factory into the Boones Mill building in 2017 after the town completed renovations to the first floor. At present, Titan Trains is the only tenant.

The vacant warehouse and offices next door to Titan Trains recently housed Liquid Performance of America, but the chemical company outgrew the space in 2019 and moved out, said Town Manager B.T. Fitzpatrick.

The relocation to Boones Mill enabled Titan Trains to grow. “We’ve invested in further machinery here,” Humphrey said, “and upped our game quite a bit.”

Some of the employees at Titan Trains have worked for Humphrey for longer then 10 or even 20 years. “We’re extremely proud that we have a long-term core staff that knows what they’re doing,” Humphrey said.

“It will last longer than our lives,” Humphrey said.

Langley Apartments has sold five apartment communities to Woodrock Property Group for $50 million, according to a news release from Cushman &a…

Langley Apartments has sold five apartment communities to Woodrock Property Group for $50 million, according to a news release from Cushman &a…

Genworth Financial Inc. has started notifying some employees that their jobs are being eliminated after the company's planned merger with a China-based investment firm was indefinitely delayed.

The Lynchburg-based parent company of Bank of the James on Friday posted a higher fourth-quarter profit.

River Ridge mall is moving forward with its next phase of redevelopment, beginning with the demolition of the former Macy’s building on the we…

Kroger is planning to build a new fuel center at the Village Courts Shopping Center at 4119 Boonsboro Rd.

The Growers Exchange in eastern Henrico County grows 175 types of herbs, ships all over the country

The Growers Exchange in eastern Henrico County grows 175 types of herbs, ships all over the country

Vernon Hitchcock works on a SD40 locomotive body at Titan Trains, where one-eight-scale train engines, cars and tracks are made.

Timmy Boyd puts the finishing touches on a caboose at Titan Trains in Boones Mill.

Jim Humphrey, founder and owner of Titan Trains, is pictured with his dogs, Cocoa, left, and Nyla, who join him at the factory every day. The company, located in Boones Mill, makes one-eighth-scale train engines, cars and tracks.

Titan Trains recently relocated to a warehouse in Boones Mill.

Curtis Hayes with Titan Trains works on the shift and control levers for a Dash 9 locomotive.

A roof to a Hopper train car comes out of a plastic vacuum forming machine, manned by Steven Blackwell at Titan Trains on Wednesday.

A finished painted product piece by Titan Trains seen in the factory.