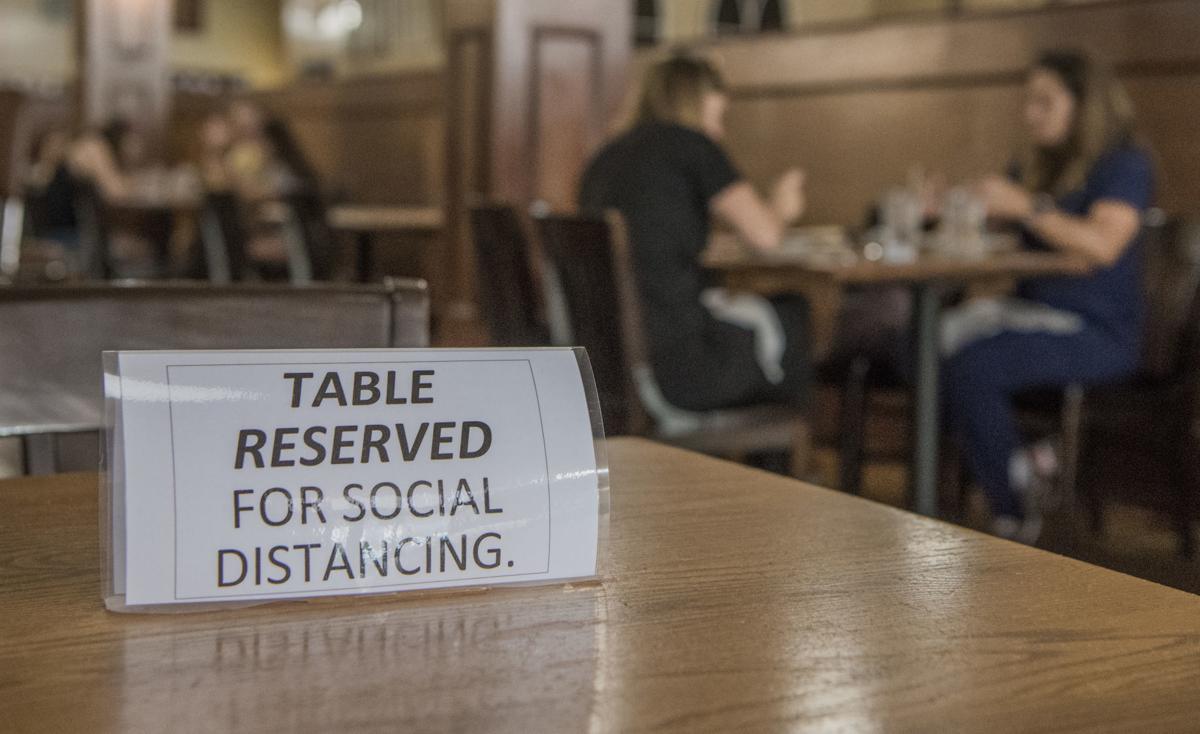 Some tables and all of the bar stool seating was off limits at Market at Main. There was still seating on the other side of the restaurant.(Photo by Lee Luther Jr.) 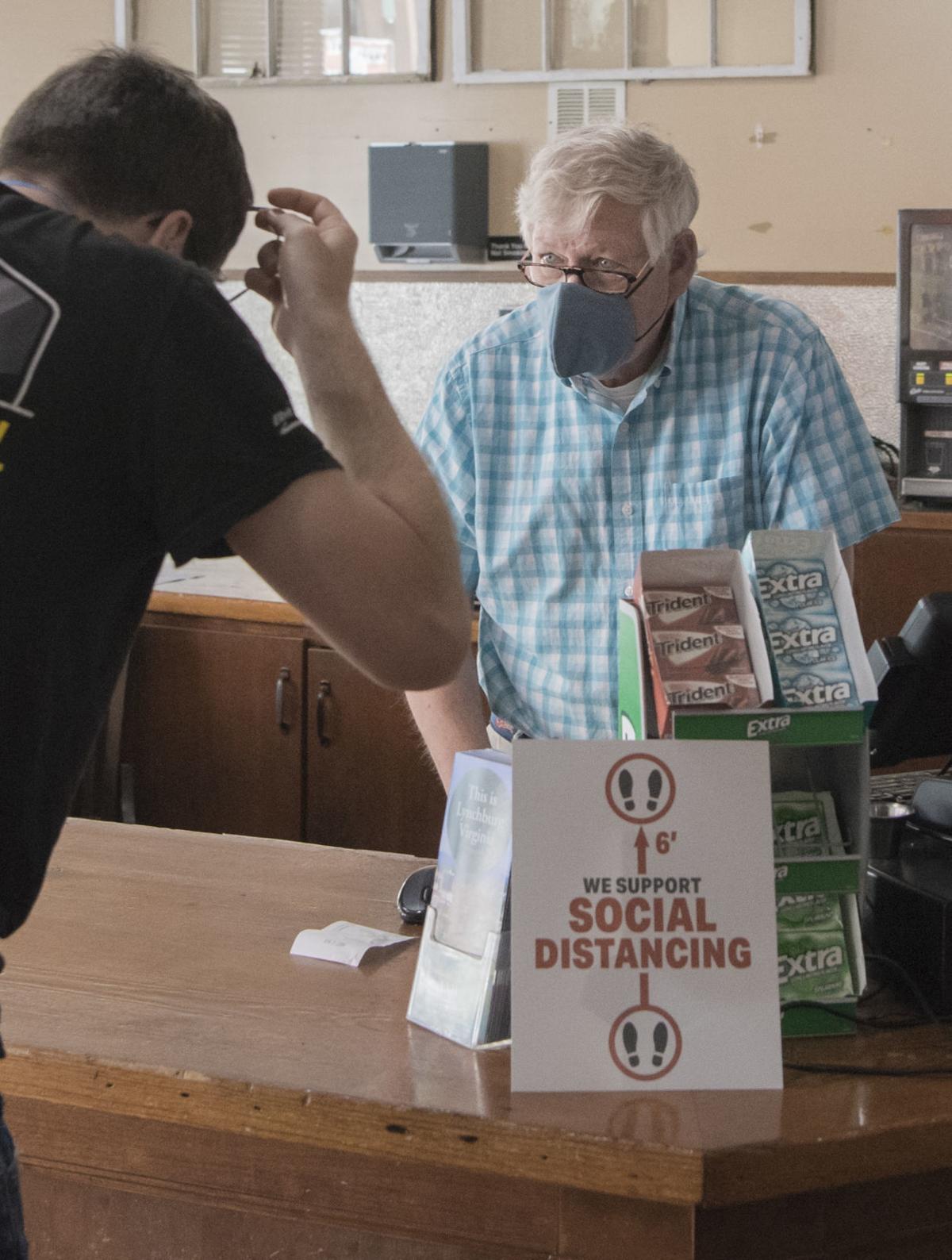 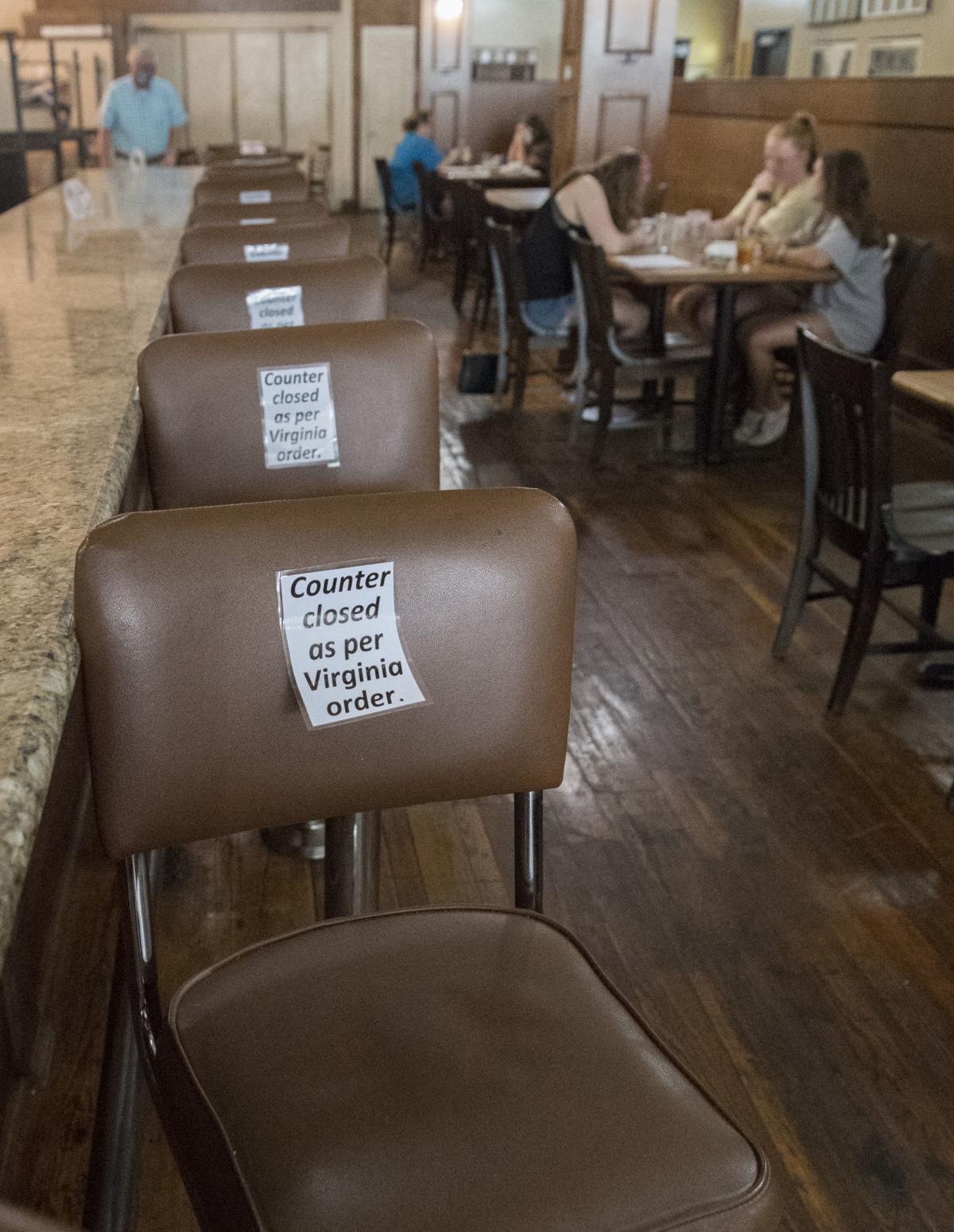 All stools at the bar are closed at Market at Main but tables offer plenty of seats for the customers.(Photo by Lee Luther Jr.) 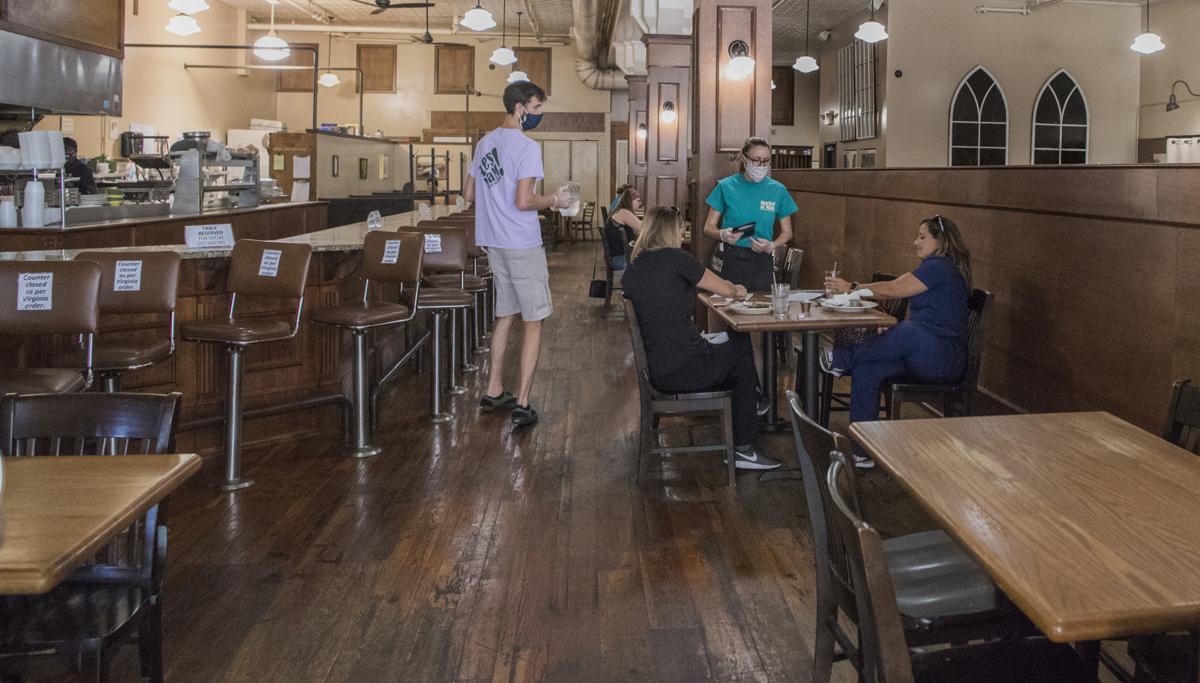 The Italian eatery on Boonsboro Road will continue to seat customers about 6 feet apart and only fill to about half capacity.

Virginia’s Phase 3 — the latest step in reopening businesses that have been closed or heavily restricted to mitigate the spread of the novel coronavirus — began July 1. Restaurants and nonessential retail stores no longer have to limit indoor capacity to 50% of what their space can hold but still must keep customers 6 feet apart.

Confirmed cases of the novel coronavirus in Virginia continue to climb, with more than 65,700 cases and more than 1,800 deaths as of Sunday. With Phase 3, Gov. Ralph Northam is easing some state-mandated restrictions on businesses; the governor has cited increased testing, decreased hospitalizations and a generally decreasing rate of positive tests as reasons.

Nonetheless, Northam said last week the state’s restaurants will not be allowed to fully reopen their bars as previously planned. Instead, restaurants with bars can continue to operate under Phase 2 restrictions, which allows limited table service in bar areas but prohibits sitting at bar counters.

Isabella’s closed March 15 for indoor seating and started curbside service a few days later. About a month ago, after Phase 2 reopening, the restaurant resumed indoor dining. The response from curbside service was so positive, Barauskas was able to keep her entire staff employed.

“We are so appreciative of our community and how much our customers have done to help us at this time,” she said. “Being a small independent restaurant, it’s been pretty overwhelming for people to give so much and care so much about us and our staff. That’s been pretty remarkable.”

The restaurant normally seats about 175 people; now every other table has been marked off to create 6 feet of distance between them.

The eatery made a few changes to hours and is no longer open for Saturday brunch so staff can consolidate and work more effectively.

Rodney Taylor, owner of Market at Main on Main Street, said he has a staff member at the restaurant whose sole job is to sanitize the door handles, bathrooms, and other parts of the business.

“I feel like we’ve really created a safe environment and our customers frequently comment on that because they see how careful we’re being,” he said.

The restaurant has been open for more than a decade and Taylor said in all that time, Market at Main has never experienced such difficulty.

Because the restaurant has no outdoor seating, the restaurant couldn’t seat anyone inside until last month and was only able to make enough money to pay the bills.

“It’s been the most difficult time we’ve experienced since we’ve opened, especially with the construction on Main Street,” Taylor said. “But we’re starting to see a light on the other side. We’re excited to see customers coming back and they’re excited to come back. It’s an encouraging sign.”

“It was the shot in the arm we needed,” he said. “With the support of the city, we were able to use the patio space beside the property and it really put us in a good position.”

At the beginning of Phase 1, The Water Dog extended its outdoor service into part of Riverfront Park to serve more customers at picnic tables.

He said the restaurant is no longer open until 2 a.m. and doesn’t allow patrons to stand at the bar, which used to be a shoulder-to-shoulder with people.

Like other restaurant owners, Henderson said Phase 3 won’t be that big of a change.

“We are already trying to maximize opportunities at the restaurant given social distancing guidelines so this is all it can be right now,” he said.

He did say it is tough for restaurants to not be able to reopen their bars. Before the governor’s announcement concerning bar seating, The Water Dog was originally planning to keep bar patrons socially distant but they would have to be seated there by a waiter.

“I think a lot of places were looking forward to that, but now we can’t,” he said.

Henderson also owns The Glass House, an event venue across the street, which has only been open one day a week during the pandemic for Rose Thursdays, an event with rose wine specials.

“COVID really hurt that business because we can’t do big concerts like we could in the past,” he said. “The question now is how do we convert that into a restaurant so we can be open seven days a week?”

Dave Saunders, who owns the Texas Inn Cornerstone and Texas Inn Downtown, only has countertop seating at both locations and has had to get creative by placing picnic tables outside so more customers could be served over the last three months.

He said he had no choice but to adapt, but thankfully the community has been supportive and has continued purchasing the restaurant’s signature Cheesy Westerns.

Saunders said year-over-year sales were down 95% in March but now sales are only down 35%.

The biggest challenge he faced was a briefly increased price of hamburger meat, which went from an average of $2.99 a pound to $7.29 a pound. Meat prices hit their peak at the end of May. Between March 15 and the end of May the price of beef more than doubled. In response, for five days, the Texas Inn increased hamburger prices by $0.50 and hot dogs by $0.25.

He said his main priority has been the health and safety of his customers and he doesn’t want anyone getting sick.

“We go above and beyond every single time,” he said. “We have had to jump through 1,000 hoops and fundamentally change our business model. We changed our hours from 24 hours a day to eight hours a day at one point and temporarily went from 24 staff members to eight.”

“We bounced back,” he said. “We found our way back. The thing has just been to pivot. From things like hours to picnic tables, to processes and protocols, we’ve done everything to keep this place alive.”

A new pie bakery has opened this summer in the Lynchburg area and is selling sweet pies such as buttery pecan, mixed berry supreme, coconut cr…

Virginia ABC had its first cyber sale during the pandemic; its website crashed before the day was done

Virginia Alcohol Beverage Control Authority had one of its regular 20%-off  "cyber sales" this week - its first during the COVID-19 pandemic - and the website for state-run alcohol monopoly crashed before the day was done.

Kroger relocating regional headquarters to the Richmond area from Roanoke

The Kroger Co., the nation's largest traditional supermarket retailer, is moving its regional headquarters to the Richmond area.

For the first time in years, a shopping center on Timberlake Road will be revitalized.

Some tables and all of the bar stool seating was off limits at Market at Main. There was still seating on the other side of the restaurant.(Photo by Lee Luther Jr.)

All stools at the bar are closed at Market at Main but tables offer plenty of seats for the customers.(Photo by Lee Luther Jr.)