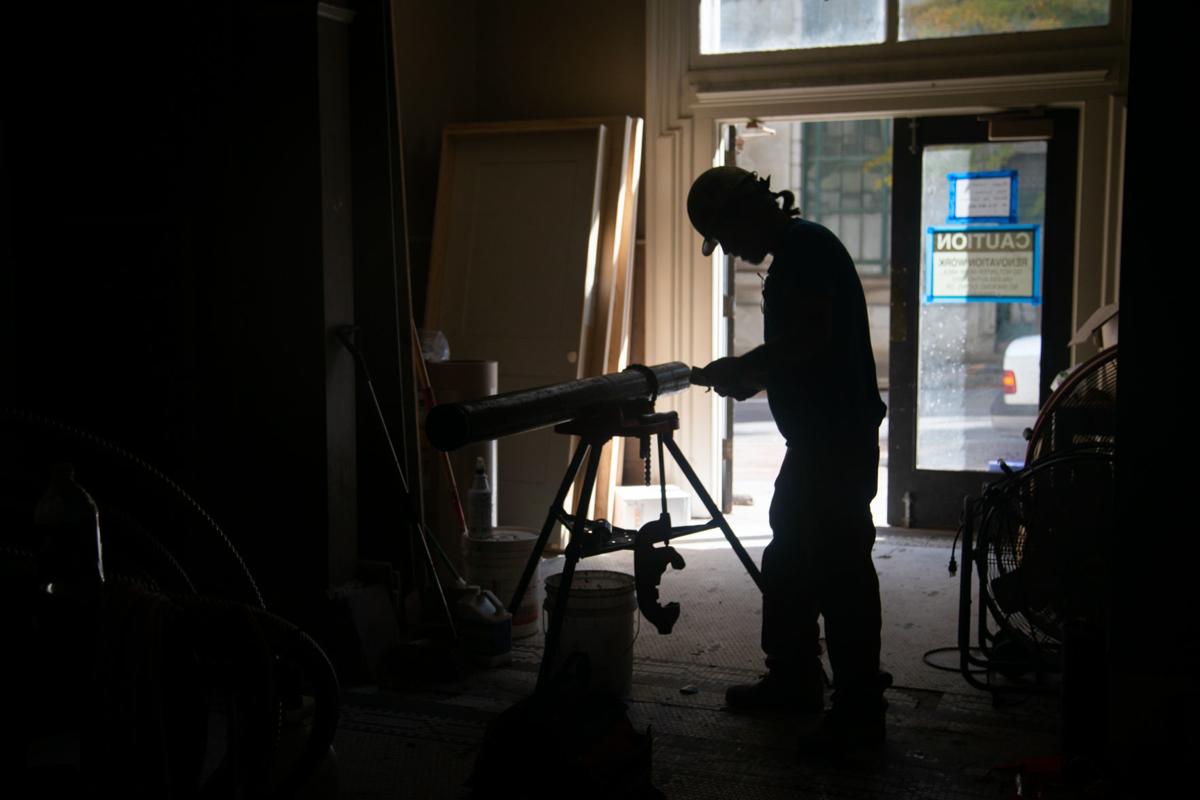 Rob Piehl works on construction on the first floor of the Krise Building on Thursday, Oct. 24, 2019 in downtown Lynchburg. 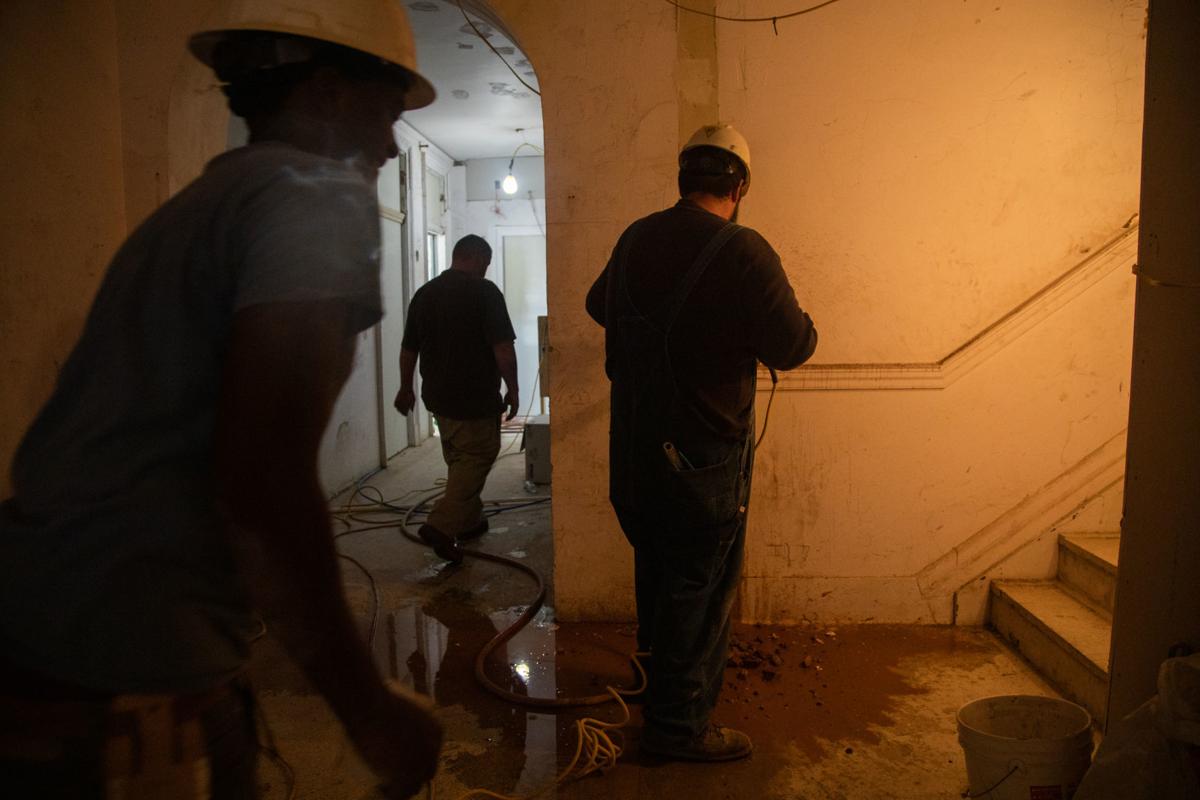 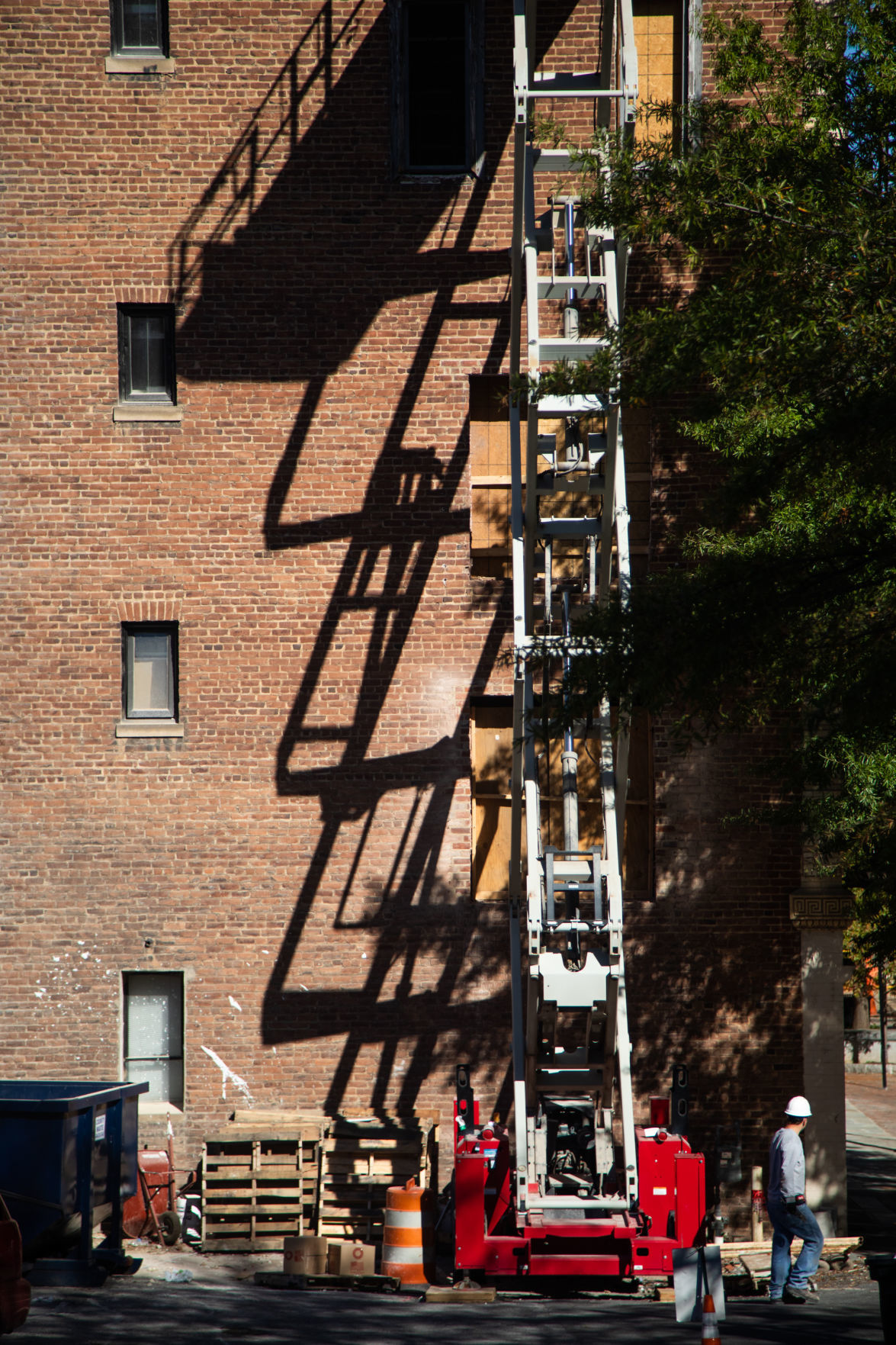 A worker walks by a construction site outside the Krise Building on Thursday, Oct. 24, 2019 in downtown Lynchburg.

With a better economy comes spending more money, and with that comes redevelopment, renovation and creation.

All over the city of Lynchburg, dirt is being dug, bricks are being laid and construction crews are working to keep up, needing more subcontractors to get these jobs done.

Cliff Harrison, developer for the Krise building on Main Street, said he has had an average of 60 workers on the site, set to become 21 New York-style apartments, but could have used double that amount to get the job done on schedule.

“On a seven-story building, that’s less than 10 people working per floor,” he said. “We could have doubled that amount of people and condensed our construction timelines.”

He said the shortage has been an issue at least for the entirety of his project, which has lasted about 18 months.

Harrison said he is not the only one dealing with the shortage.

“Everyone in the industry is trying to hire people. There’s not enough people in the workforce who are willing to do this type of work; the dependability of the workforce real often is not what it needs to be,” he said adding that sometimes workers simply don’t show up to the job site, can’t pass a drug test or aren’t properly licensed.

According to 2018 data from the U.S. Department of Labor, there are about 4,000 construction workers in the city; they make an average of $16.73 an hour. There are about 90 cement masons and concrete finishers, 370 electricians and 380 construction laborers.

According to a survey conducted this year from Associated General Contractors and Autodesk, more than 80% of Virginia construction companies are having difficulty filling hourly craft positions.

These positions include bricklayers, plumbers, cement masons and electricians.

Dan Deter, vice president of major construction at Liberty University, thinks trade schools are becoming more prevalent and his hope is that when office jobs become too saturated, young people will want to work construction instead.

“Kids are intelligent enough to know they want to get good jobs when they graduate and they’re gonna gravitate toward things they know they can be successful in,” he said.

Ultimately he believes the construction market is turning around and with more work orders to come, he sees the industry rebounding.

“It’s a much safer industry than it was 20 years ago. [The Occupational Safety and Health Administration] makes sure our workers are safe and there have been leaps and bounds made with technology,” he said. “The things we can control, we try to do as good of a job as we can.”

Cliff Coleman, of Coleman-Adams Construction, said there is no question that the construction industry is seeing a shortage in help.

“Especially with the economy right now, things are busy,” he said. “Like most companies you seem to have too much work for your men to do or not enough men to do the work, one or the other. It’s really hard to find a balance. We’re doing fine now and have enough people to get what we need done, but overall the industry is hurting and it will continue to hurt as time goes on because there are less people getting into the trade, unfortunately.”

Blair Godsey, with Altus Group, a construction group based in Roanoke, said there certainly is a lot of construction activity throughout the state and country and it has created a shortage of qualified workers.

“We are fortunate that we have a very strong network and team of subcontractors and vendors who have worked with us for years and we’re loyal to and in turn, they’re loyal to us,” he said.

He attributed the shortage to a strong demand for workers because of the strong economy and said there are lots of opportunities and jobs available.

Harrison said the city is investing more in downtown and with that comes more development and a higher need for workers.

“Lynchburg is blessed to have a diversification of economic engines including the colleges and universities,” he said.

During the past 12 months, LU has been working on four major projects, Deter said, but this is the first time he has had to really work to get subcontractors on the campus.

“A lot of projects in the area ramped up at the same time and with two or three smaller projects, I’ve basically had to get creative on how I broke apart projects,” he said.

“I’ve had to put off projects because we didn’t have the manpower,” he said.

Plans are underway that could bring a Popeyes restaurant to the former Taco Bell location at 2802 Candlers Mountain Rd.

Nearly $1 million in state funds was awarded Tuesday to projects aimed at growing the regional economy and helping it recover from the coronavirus pandemic.

A new fine dining restaurant will be making its way to the former Main Street Eatery location in downtown Lynchburg.

The Country Cookin restaurant at 20584 Timberlake Road has closed as of Monday.

A new fine dining restaurant will be making its way to the former Main Street Eatery location in downtown Lynchburg.

A new sports bar will be opening up in downtown at the beginning of next month.

Under the request, bills for residential customers would go up 6%, or about $10 a month for the average home.

Rebuild VA is expanding its criteria in an effort to help more small businesses struggling with the economic effects of the pandemic.

3 Stocks to Buy With Dividends Yielding More Than 6%

In a low interest rate world, are there really higher-yielding companies worth considering?

A new business selling fresh seafood, including fan favorites such as shrimp, grouper and scallops, has opened a stand alongside Boonsboro Road.

How to set up a good homeschool environment

How to set up a good homeschool environment

Rob Piehl works on construction on the first floor of the Krise Building on Thursday, Oct. 24, 2019 in downtown Lynchburg.

A worker walks by a construction site outside the Krise Building on Thursday, Oct. 24, 2019 in downtown Lynchburg.