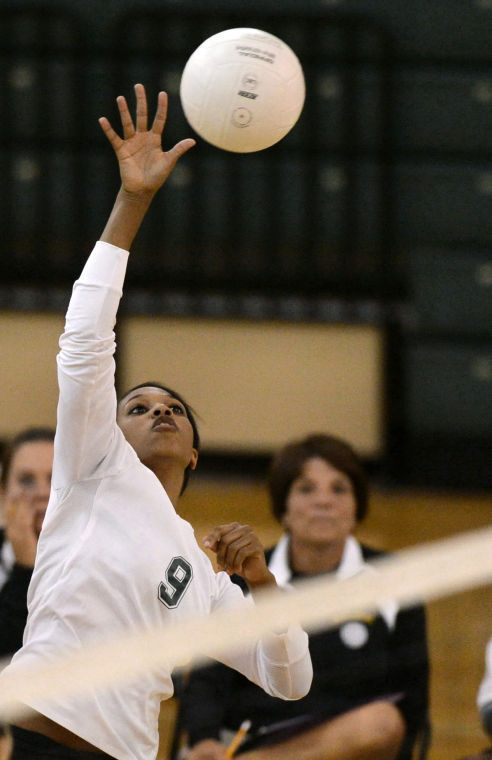 In this file photo, Alexis Murphy returns the ball during a volleyball match with her Nelson County Lady Govs squad. Family and friends gathered on the field at Nelson County High School on June 5 to celebrate Alexis’ life on what would have been her 25th birthday. 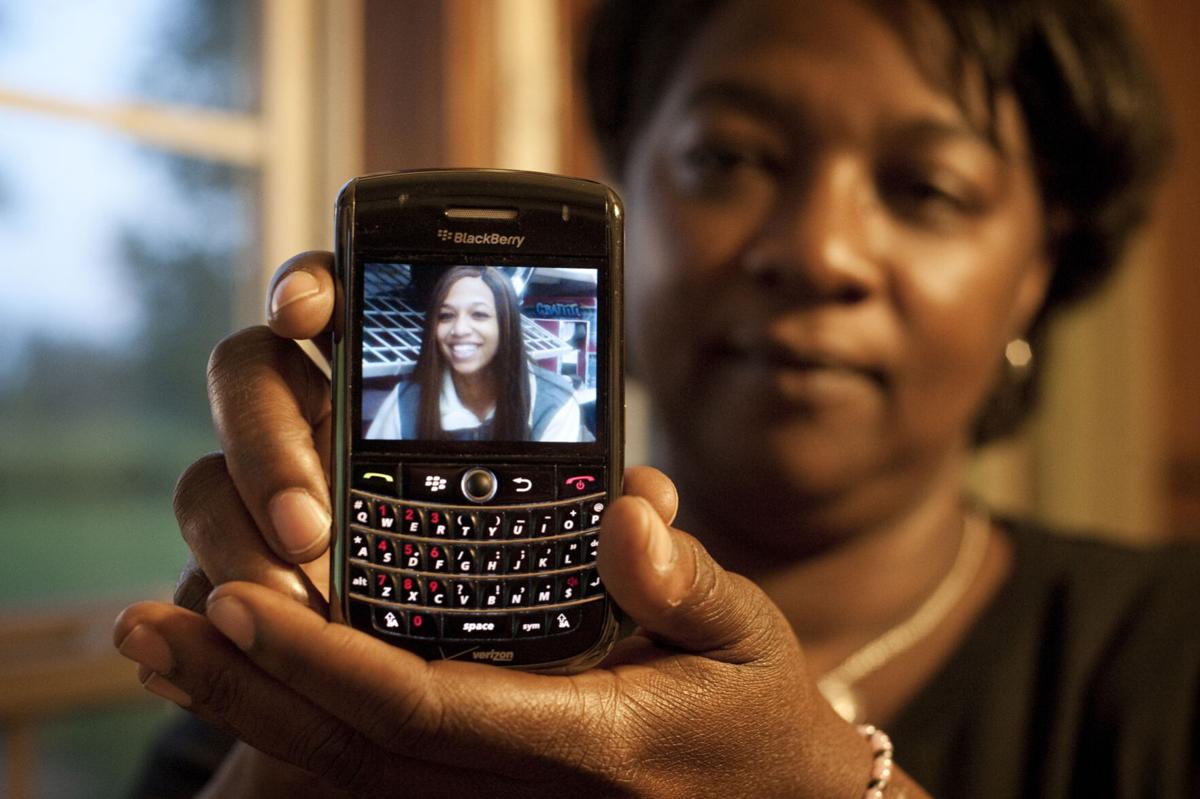 In this Aug. 29, 2013 file photo, Laura Murphy shows one of the last photos taken of her daughter, Alexis, on her cell phone at the Murphys’ home in Shipman. 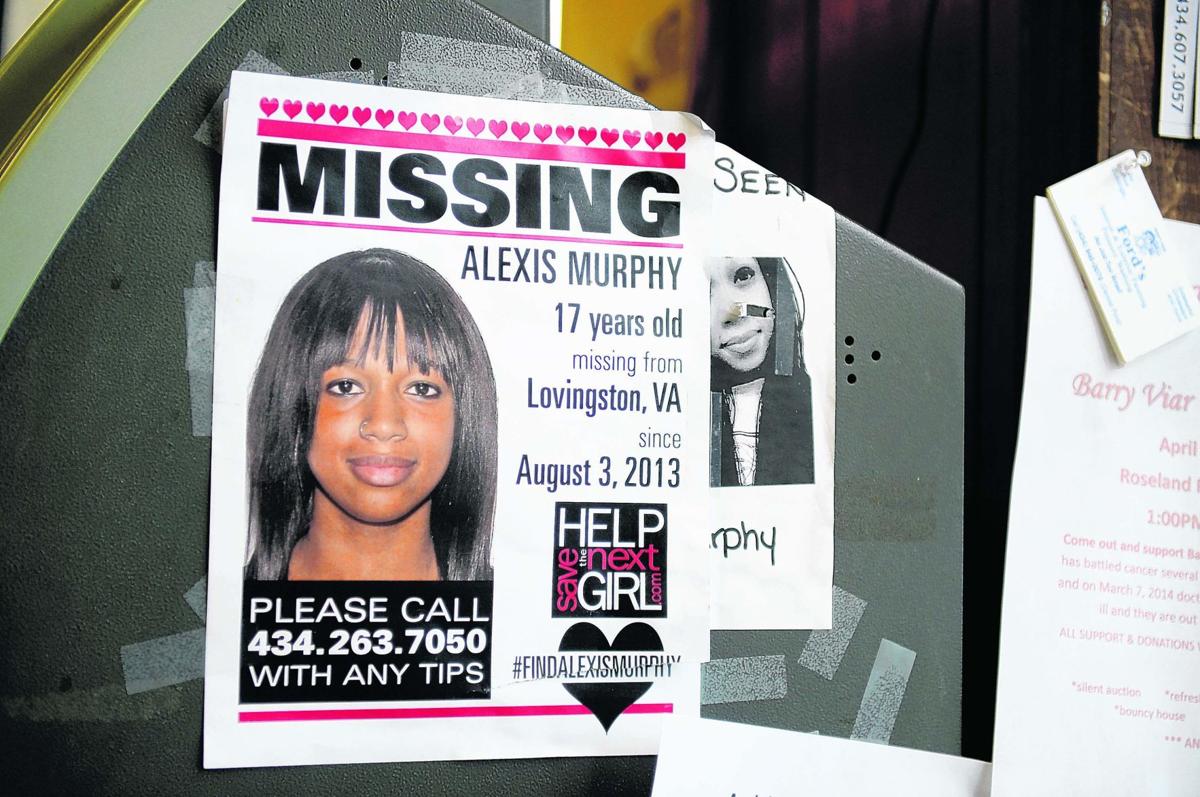 Posters about Alexis Murphy were all over Nelson County when the teen went missing in 2013. (File Photo by Lee Luther Jr.) 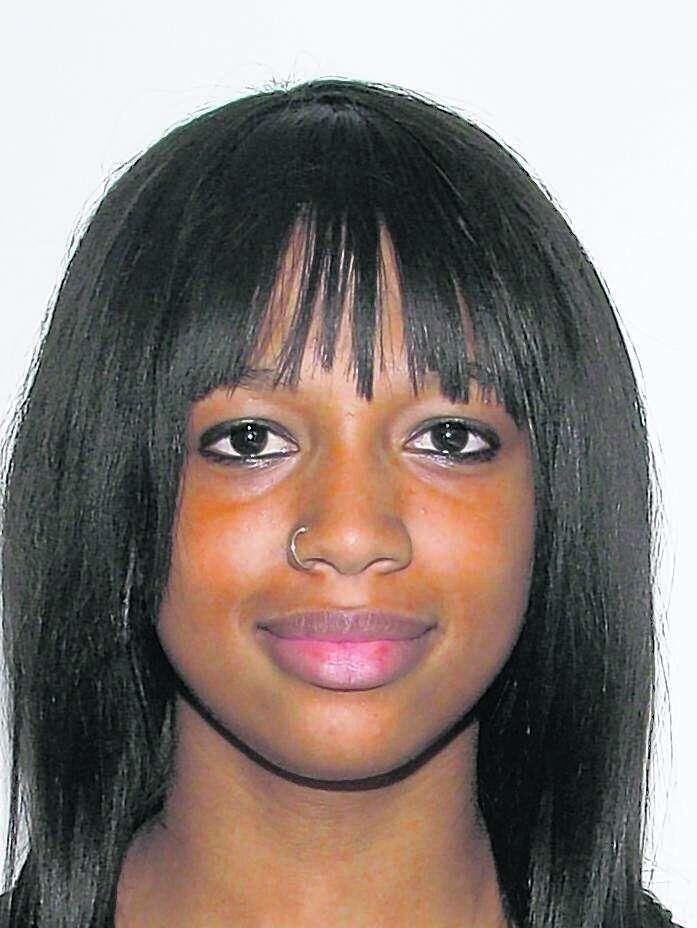 On what would have been her 25th birthday, family and friends gathered on the field at Nelson County High School on June 5 to celebrate the life of Alexis Murphy and share memories of the Shipman teen who went missing in 2013.

Angela Taylor, Alexis Murphy’s aunt, said she envisioned a celebration that allowed people to “get a sense of who she was.” She said the event falling on Alexis’ birthday was a way to give her a final goodbye.

“She [Alexis] was only 17, but she was an old 17. I think that’s what we wanted to embody in the service,” Taylor said. “We could have done this back in February or waited until Aug. 3 and done it, but doing it on her actual birthday just, to me brings, everything full circle.”

The ceremony comes several months after officials announced in February they had recovered Alexis’ remains after roughly seven years of searching.

Alexis went missing Aug. 3, 2013 after visiting a gas station in Lovingston. Her remains were discovered just miles from her last known location.

Despite having been gone for almost eight years, Taylor said her niece left a lasting impact on the people who knew her.

“She touched people in so many different ways and I think for somebody to be 17 and have such an impact on people’s lives … just kind of speaks to who she was and the person she would have become had she not been taken so tragically,” Taylor said. “In time I hope that we will understand why our family was chosen to go through this and why Alexis was the person to be taken from us.”

Trina Murphy, also an aunt to Alexis, gave a eulogy during the ceremony, which was filled with tears and laughter, she said.

“We wanted it to be representative of her life and her personality. We just didn’t want a stuffy, traditional, everybody-is-sad type of service. We wanted to have some laughter and talk about some of the silly things she used to do and just share our memories,” Trina Murphy said.

In a phone interview June 7, Trina Murphy said she hadn’t come to terms with the ceremony a couple days prior. And while this is the first birthday in seven years the family can say Alexis is back home, it doesn’t bring her a full sense of closure.

“For me, I just started the grieving process in December. When someone is missing there is no process for that. You cant go through the stages of death when someone is still missing,” Trina Murphy said.

During her remarks, Taylor offered a thank-you to law enforcement and the community for their support over the past seven years.

In December, news of Alexis’ remains being found opened old wounds and closed others, Taylor said. Authorities had first contacted the family in December regarding the discovery, but it took several weeks before the identify of those remains was confirmed.

When Taylor got the call from her sister and Alexis’ mother Laura Murphy, she said it was like “getting sucker-punched in the gut.”

“I don’t know if ill ever forget it … but I felt very sick that day on that call and then to Saturday it was a sense of calmness. A sense of being at peace and that had to do with having her home and knowing where she is,” Taylor said. “That has been the biggest peace and comfort of this entire process is her being truly at home.

Referencing a speech that was made during the event, Taylor said the family was stuck at various stages of the grieving process, unable to move to acceptance.

“I think obviously we’ve been processing this for such a long time and I think Saturday was the start of that acceptance stage,” Taylor said.

The time from when the remains were found in December to when the information went public in February allowed the family to come to terms with the reality of what had happened.

Randy Allen Taylor, convicted of abducting and murdering Murphy in May 2014, is serving a life sentence.

Taylor said Alexis will always be with her emotionally and physically, as she wears a necklace containing some of her ashes.

As the funeral home was setting up the memorial before the ceremony, Taylor said she had the chance to be alone with Alexis.

“That helped a whole lot,” Taylor said. “I was very at ease and at peace with what we were doing and I needed that; for me that was my closure that opportunity to sit with her, tell her I love her and how much I wish she was still here with us.”

Massies Mill carnival returns with rides, games, fun for everyone

From the evenings of June 15 to 19, hundreds of attendees flocked to the Massies Mill Ruritan Club's carnival, itching for something to do after a year that saw most every event cancelled, and the carnival was no exception.

COVID-19 vaccination numbers have reached new heights in Nelson County with half of all residents being fully vaccinated, but as demand for th…

Mandated projects for two of the Nelson County Service Authority' wastewater treatment plants in Wintergreen and Schuyler are facing early delays lending to the frustration of the authority's board of directors.

A request to rezone the former YMCA facility in Gladstone to Business (B-1) was approved by county officials, helping clear the way for the property to be the site of a future community center and transportation museum.

In this file photo, Alexis Murphy returns the ball during a volleyball match with her Nelson County Lady Govs squad. Family and friends gathered on the field at Nelson County High School on June 5 to celebrate Alexis’ life on what would have been her 25th birthday.

In this Aug. 29, 2013 file photo, Laura Murphy shows one of the last photos taken of her daughter, Alexis, on her cell phone at the Murphys’ home in Shipman.

Posters about Alexis Murphy were all over Nelson County when the teen went missing in 2013. (File Photo by Lee Luther Jr.)