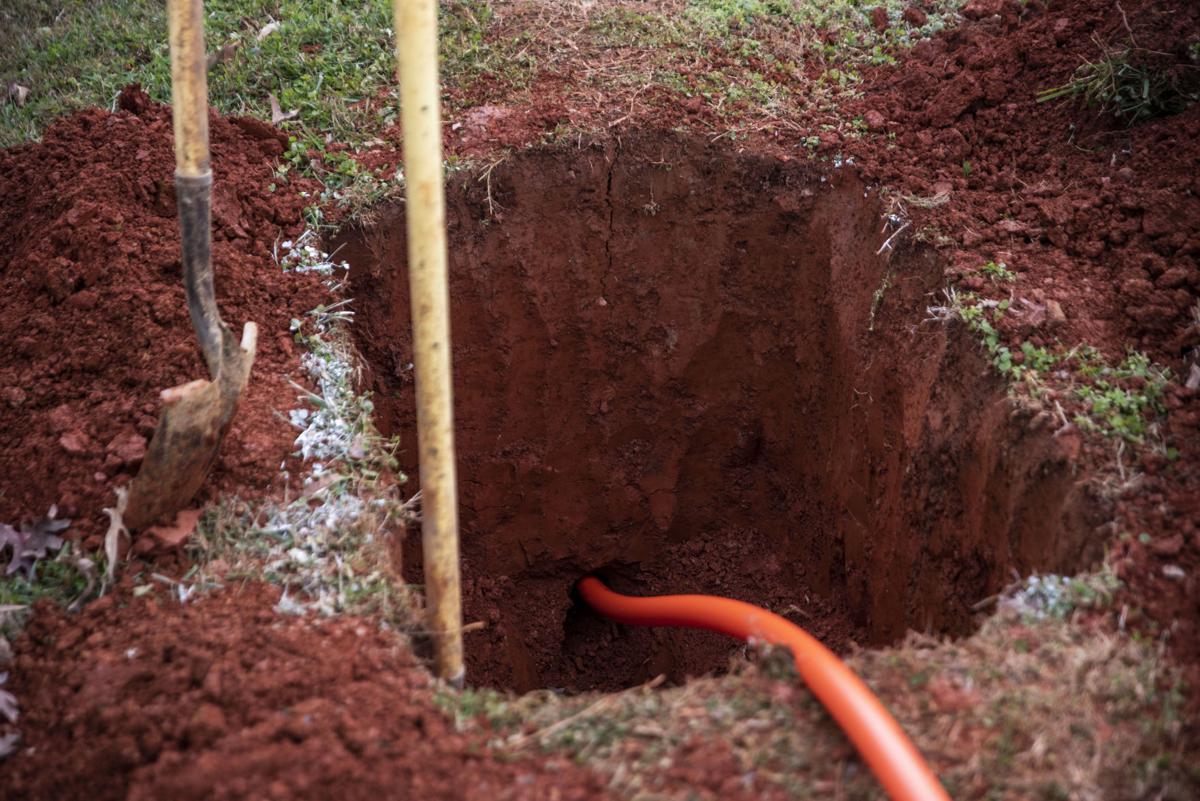 A fiber-optic cable is pulled through a hole drilled underground in Amherst in December 2020 as part of Central Virginia Electric Cooperative’s local broadband expansion efforts. 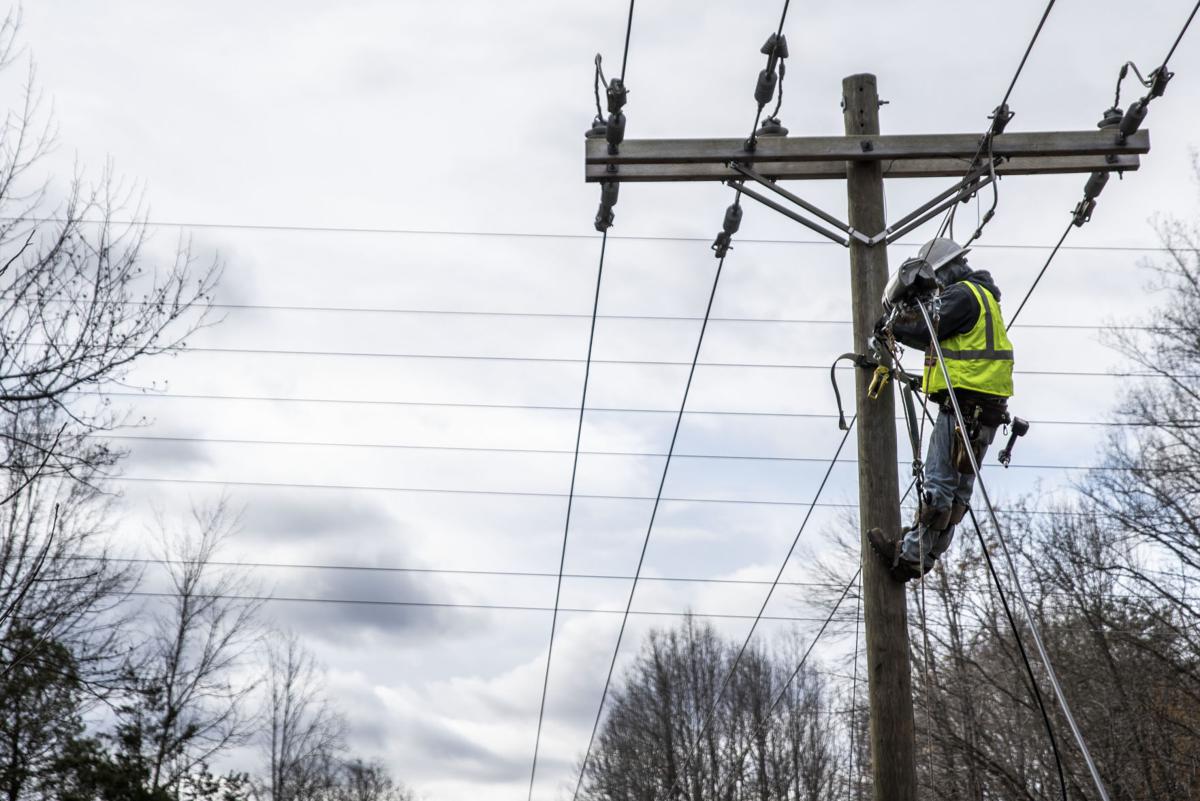 In this Dec. 1, 2020, file photo, crews work to hang fiber-optic cable in Amherst. The cable will allow rural residents in Amherst and Nelson counties to have access to high-speed internet, which area officials say is a top priority and will boost economic development.

Melissa Gay, communications manager for Central Virginia Electric Cooperative based in Nelson County, presented a report to the county’s board of supervisors and broadband authority on July 13. Firefly, a subsidiary of CVEC, is working to make broadband coverage available to all county residents and businesses.

CVEC has completed construction of the Martins Store, Wintergreen and Colleen substations, making gigabit speed access available to 6,800 of the 8,000 locations the cooperative has in its electric service territory in the county, Gay said. The Gladstone substation’s buildout has been delayed by several river crossings and multiple railroad crossings and getting those in place will allow CVEC to reach another 250 locations along the James River and near Wingina, according to the report.

“We’re getting there, slowly but surely,” Gay said.

Work on substations in Schuyler and Piney River is ongoing and it will be close to year’s end when crews begin placing fiber in those areas, which will include the last 1,100 CVEC locations in the county to have service available, the document states.

“We are still on schedule to have the CVEC area built out by mid-2022,” the report said.

Work on construction funded by the Coronavirus Aid, Relief and Economic Security (CARES) Act is mostly completed with the exception of an area of Shipman. The CARES projects makes service available to another 400 locations in Nelson County, according to the report.

Work to bring universal service in the county through American Electric Power’s territory has reached into the first three areas in portions of Arrington, Shipman and Schuyler, which gets service availability to 625 locations. Firefly forecasts a year to a year-and-a-half period to get the work completed. After the first three areas are complete, about 1,000 other locations on the AEP system will remain and Firefly will get to those as quickly as possible, according to the document.

Jesse Rutherford, the broadband authority’s chair, said the expansion is a “living list.”

“There’s no rhyme or reason for the order,” Gay said of getting to areas throughout the county.

The report states Firefly has not marketed any of the areas but more than 100 residents living within the Arrington, Schuyler and Shipman areas have contacted CVEC and have signed up for service.

Firefly also is working on a Regional Internet Service Expansion (RISE) project, which is aimed to bring universal service to a dozen counties in the region.

“Nelson County is way ahead of the curve on this and we will plan our work in a way that assures Nelson continues to get built out as we plan work for this larger project,” the report states.

The RISE project includes a partnership with Dominion Energy, which includes building fiber on facilities and leasing it to Firefly. About 30 locations on the Dominion system at the top of Afton Mountain is included in the planned build out.

Gay said residents can help by taking a survey at www.fireflyva.com/rise. It must be shown that service is not available in unserved areas and residents are asked to provide their address, what type of internet they have and anyone who has turned them down for service. It takes less than a minute to fill out the survey, Gay said.

Firefly has sought additional money to support the fiber expansion project through the federal, state and local levels, including applying for grants.

Gay said Firefly is seeking no additional money from Nelson County aside from what already has been allocated. Since a 2017 study on the fiber optic network, costs have increased for labor and materials, the report states.

For Firefly to maintain rates of $49.99 per month and $79.99 per month it needs to find enough grants and incentive payments to offset growing capital costs and keep the investment to $30,000 per mile. In Nelson County, Firefly will have 132 miles of construction on AEP territory and another four miles on Dominion’s, requiring a total of more than $7.5 million, the report says.

The Nelson County Broadband Authority’s contribution of $1.25 million helps offset a portion of that cost.

“Firefly is committed to bridging the digital divide and it will find a way to get the construction completed without asking for further county funding,” the report said. “On the other hand, we are making use of every dollar we receive to keep the project moving and keep the rates low.”

Wintergreen Resort has announced the hiring on a new general manager, Jay Gamble, following an extensive search including candidates from acro…

Nelson County High School held an outdoor screening of “Field of Dreams” on Sept. 10 on the football field.

A fiber-optic cable is pulled through a hole drilled underground in Amherst in December 2020 as part of Central Virginia Electric Cooperative’s local broadband expansion efforts.

In this Dec. 1, 2020, file photo, crews work to hang fiber-optic cable in Amherst. The cable will allow rural residents in Amherst and Nelson counties to have access to high-speed internet, which area officials say is a top priority and will boost economic development.