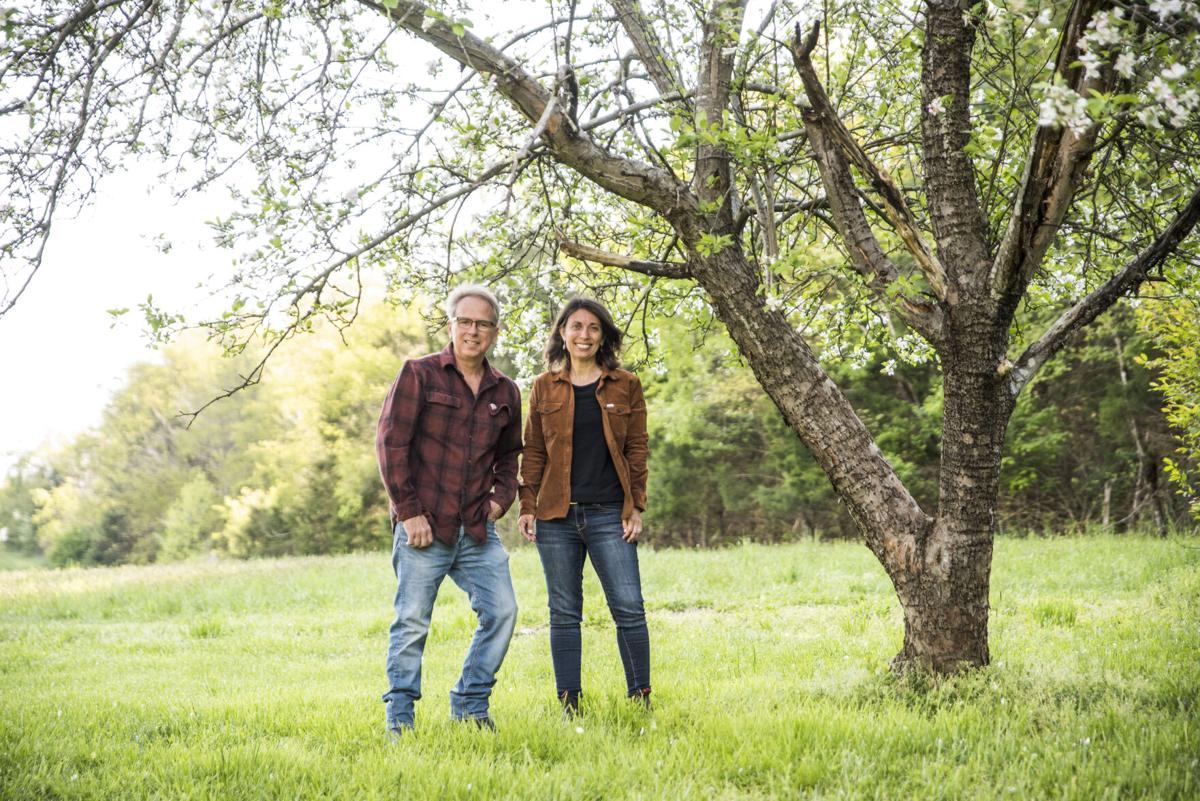 Tommy and Yvette Stafford pose for a portrait at their farm in Roseland on April 21. 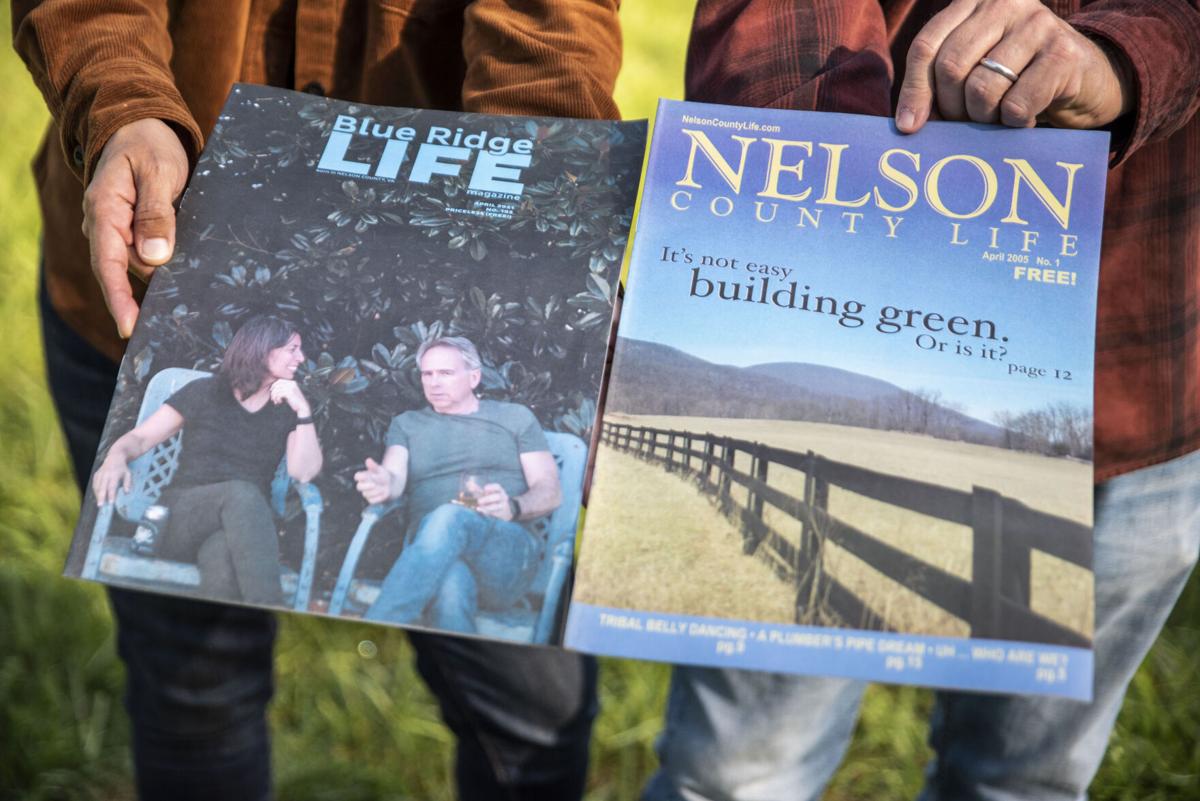 Tommy and Yvette Stafford hold the first and last edition of Blue Ridge Life Magazine at their farm in Roseland.

It began and ended on April Fools’ Day.

Sixteen years ago, when Tommy and Yvette Stafford set out to start Blue Ridge Life, they wanted to fill a niche telling otherwise overlooked human interest stories. But on April 1, the former TV journalists broke their own story.

The couple published their final issue of the monthly magazine — formerly known as Nelson County Life, and once exclusively covered the rural county but later expanded to include the Blue Ridge region — after 193 print editions.

But this was no April Fools’ joke, despite what many may have believed.

After meeting through TV journalism industry in the late ‘90s, Tommy Stafford said he and Yvette both knew long term that wasn’t where they wanted to be. They wanted to tell the stories that a news director would never let them pursue.

They first got the idea for a human interest magazine when Yvette Stafford traveled out west following a brief breakup. She was inspired by a similar publication she picked up along the way.

“I think my kind of storytelling, it feels obsolete in many ways, and I love the medium, the power of television, it’s amazing,” Yvette Stafford said. “What we were trying to do was tell stories our way without the pressure of a large corporate-driven news director.”

In 2013, the magazine grew to include the greater region, and Yvette Stafford said they worked hard not to stray away from what they first set out to do.

“When we went to Blue Ridge Life it actually kickstarted a whole new set of story potential because we had kind of boxed ourselves into Nelson County,” Yvette Stafford said.

Through sickness, disease, two children, the housing market crash in 2008, and most recently the COVID-19 pandemic, the Roseland couple weathered it all, never missing a deadline. The Staffords originally had intended to release their final issue in November once they reached the 200th edition.

Tommy Stafford said they intended to “do a victory lap” and reminisce on the past 16 years, but the loss of a major advertiser accelerated their timeline.

Around the Thanksgiving holiday in 2020, Yvette Stafford said her husband nearly died from sepsis following a routine operation. It was from that close call the couple started “fantasizing” on how to close the book on Blue Ridge Life.

“We wanted to end on a strong note, not be crawling over the finish line going, ‘We made it, we did 200. See?!” Tommy Stafford said.

Since making the announcement, they have received a flood of emails and cards from readers.

“A beautiful thing happens when you end a magazine, your readers start writing and it’s like this flurry of memories and stories that you had no idea what was going on while you were just busy, busy, busy putting out a monthly publication,” Yvette Stafford said. “It’s pretty damn cool.”

Despite the end of the print product, Tommy Stafford said the electronic side of Blue Ridge Life is not going away. He added the two have plenty to do between the farm, their children on the cusp of being teenagers and Yvette Stafford’s real estate business.

“The website is such an archive, I don’t ever want it to go away even if I quit maintaining,” Tommy Stafford said.

Old habits die hard, though. Even with the final edition in the books, Yvette Stafford said she still catches herself thinking of potential stories to cover, only to realize moments later that won’t be the case.

The Staffords couldn’t help but reminisce on stories from the past 16 years as they sat outside their Roseland farmhouse amid chirping birds and gentle gusts of wind that ruffled trees and swayed fields of grass.

“We were all about printing fluff. Pretty pictures and nice words,” Yvette Stafford said, from heartwarming stories to bizarre hobbies.

Tommy Stafford recalled one of his favorite stories about a boy with his pet parakeet. He described it as a simple story that would have never seen the light of day in a more traditional publication.

There was a time when the wrong ad was published because of a “simple filing error.” The solution: hire more than half a dozen people for $10 per hour to stuff every one of the 11,000 copies with the corrected ad — all the while taking pictures of the ordeal and embracing their mistake.

“Not only did we save them as a client forever … it became this big kind of jazzy talk,” Tommy Stafford said. “People said it was great. The thing was we could do that. We could adjust on the fly and do those kind of things.”

The couple enjoyed complete creative control over their magazine despite being approached by individuals early on with the desire to invest in their publication.

Yvette Stafford said roughly every four years requests would come in to run political ads or stories as well.

The Staffords turned down the offers every single time, never wanting to lose sight of the stories they wished to tell even as the publication grew, breaking free from the confines of the county and becoming Blue Ridge Life Magazine.

“We had been approached a few times early on for people to invest in our publication and we had always said no thank you because we knew we would lose control,” Yvette Stafford said, adding they never would have pursued the magazine without creative freedom. “I guess we’re control freaks, but we’re nice control freaks.”

As the agritourism industry grew in the Virginia 151 corridor with the introduction of breweries and cideries, so too did the publication.

“It was a nicely symbiotic relationship,” Yvette Stafford said.

Director of Economic Development and Tourism Maureen Kelley said that growth took off in the late 2000s.

Kelley called the magazine’s decision to take on the region was a great idea because “many communities like Nelson did not have a quality-of-life publication.”

Kelley said she knew the Staffords before they were married and had supported them “every step of the way.”

“I could not be more pleased or proud of their prudent decision making and their ability to adapt to change, to continue to reach for better things for themselves and their children. I think the world of them,” Kelley said. “They’ve touched a lot of people’s lives and that’s significant.”

Nelson County is “chock full” of characters, Tommy Stafford said, and after 16 years they finally ran out of stories to tell. He even recalled a conversation he had with Earl Hamner Jr., the creator of “The Waltons” TV show, before his death in 2016.

“[Hamner] told me just don’t get too big, it won’t be worth it,” Tommy Stafford said. “And I never forgot that. The end.”

The school division is accepting input from the public on shaping policies involving masks. A link to the survey is in this article.

In her three years as the Parks and Recreation Department director for Nelson County, Claire Richardson has seen the completion of a roughly 20-year, multi-million dollar project, adult and youth sports leagues and a global pandemic.

Tommy and Yvette Stafford pose for a portrait at their farm in Roseland on April 21.

Tommy and Yvette Stafford hold the first and last edition of Blue Ridge Life Magazine at their farm in Roseland.