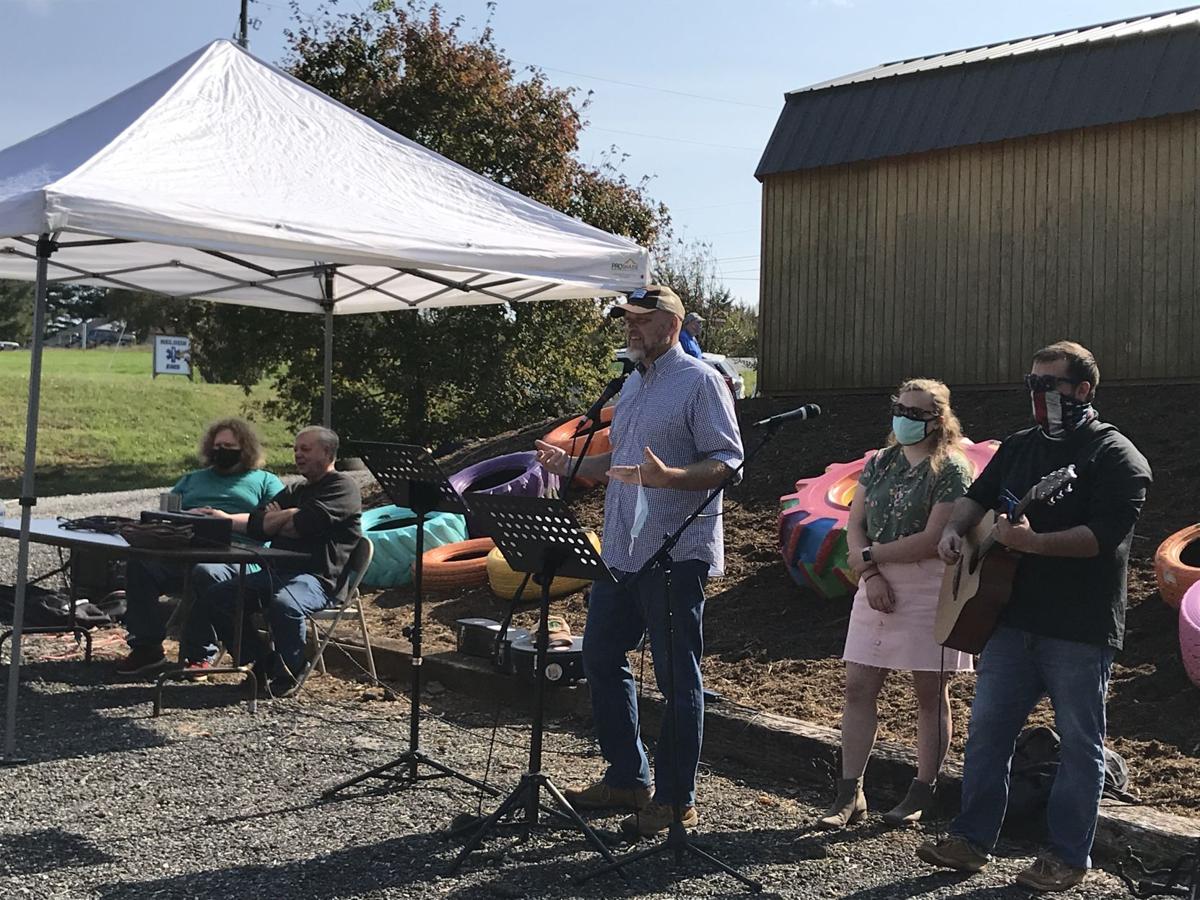 Pastor Dan Magan speaks at The Well of Nelson during a Sunday service that included members of Cedar Grove Baptist Church and Ridge Crest Baptist Church. 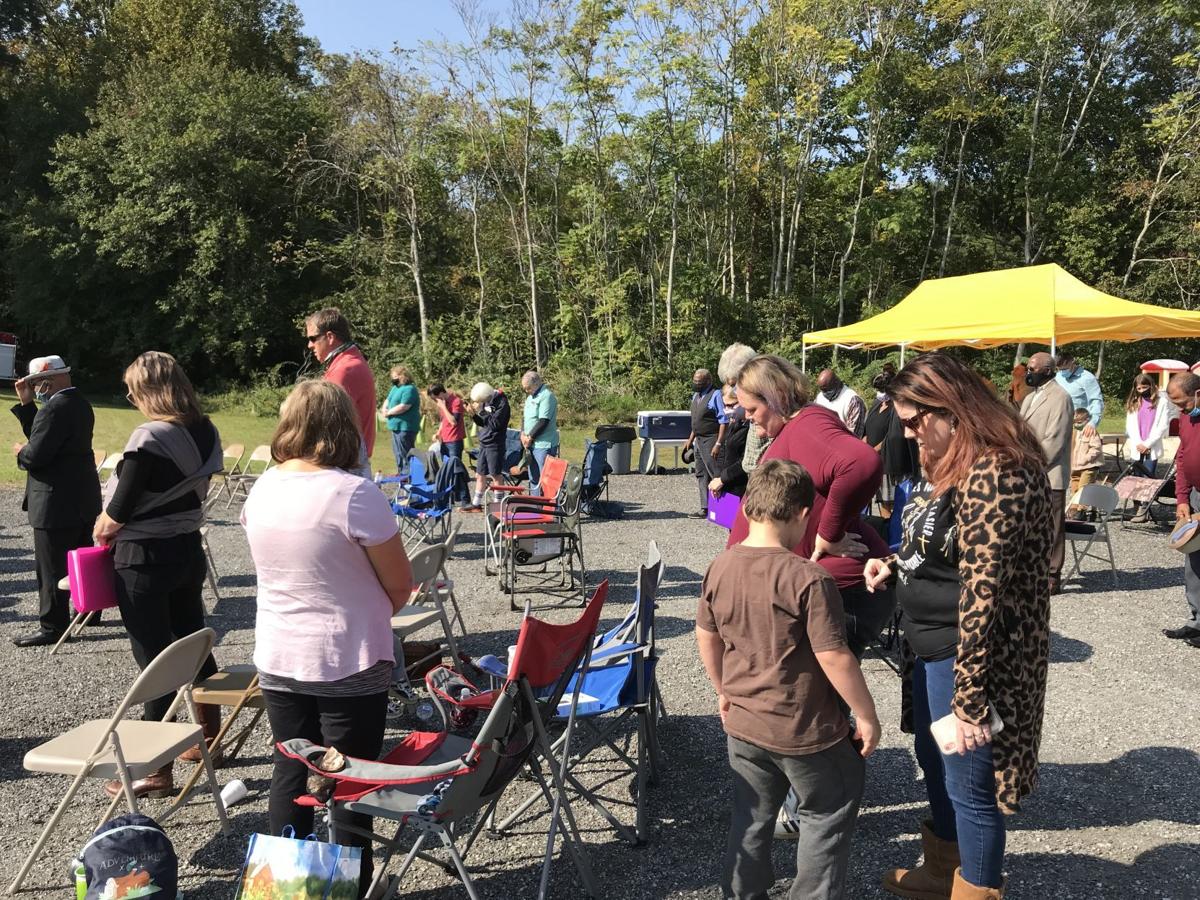 Members of the three churches bow their heads in prayer during a service Oct. 4, 2020. 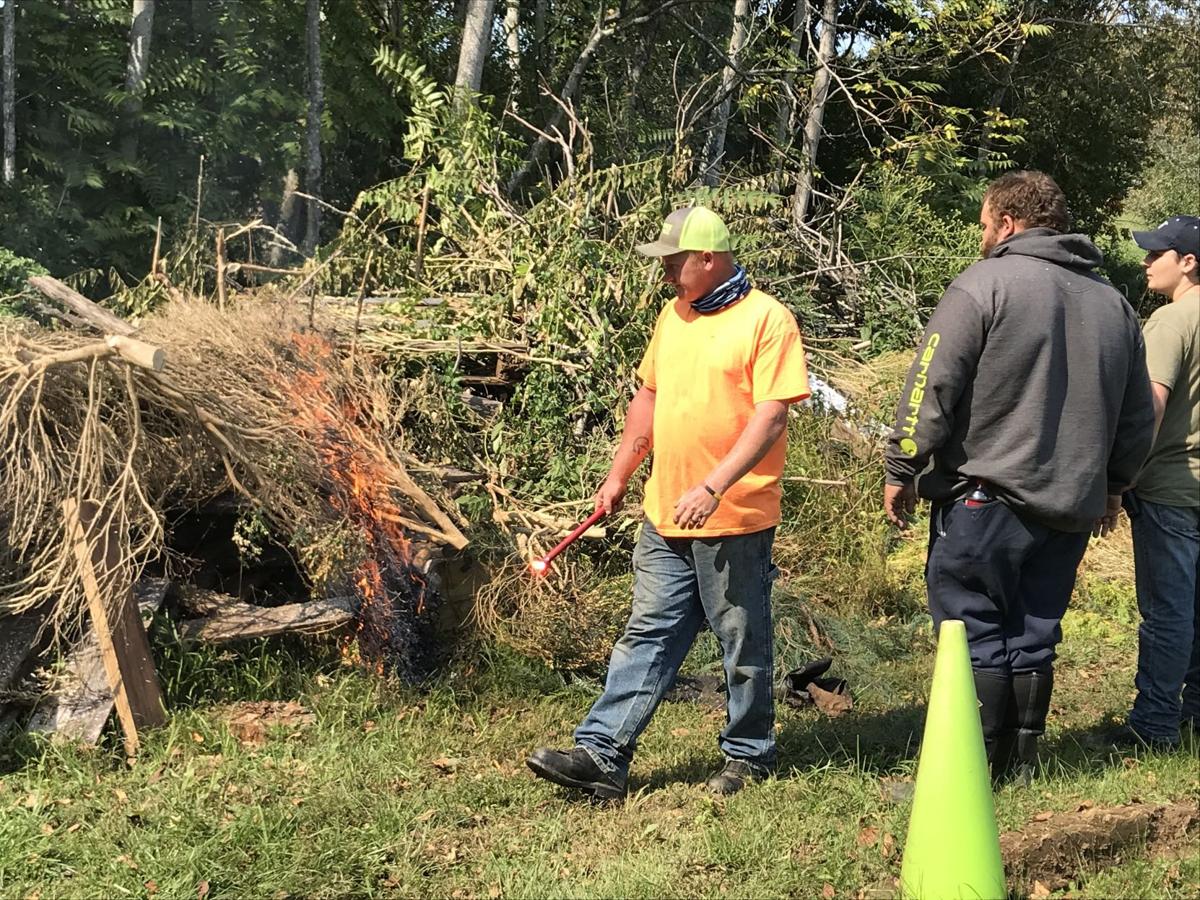 Firefighters light a brush fire following a service Oct. 4, 2020, that brought the two churches together. 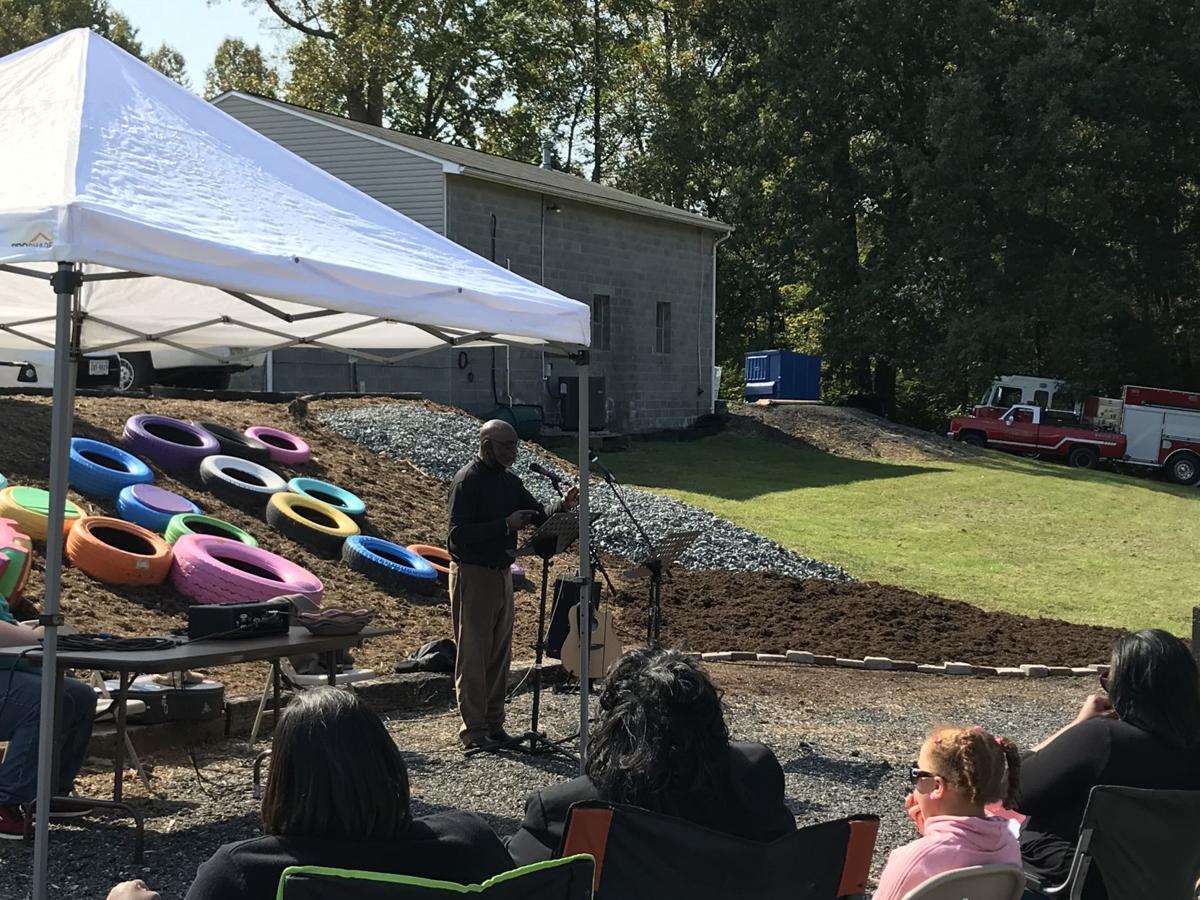 Pastor Butch Wells with Cedar Grove Baptist Church delivers his sermon at The Well of Nelson on Oct. 4, 2020.

Just like any other Sunday, pastor of Cedar Grove Baptist Church Butch Wells took his place behind the podium and delivered his sermon.

“I think the goal for today was to show that there were Republicans, Democrats, Libertarians here. There were Black, white, Hispanic, Asian, all of these things that divide us don’t divide us and they don’t have to divide us. What unites us is we’re here for a common good to lift up the reconciling God,” said Dan Magan, pastor of The Well of Nelson.

Wells compared bringing the two churches together to a small brush fire that was ignited behind the Well of Nelson after the service. That fire would begin small, but he said it soon would grow. He added through the story of Gideon, it was evident small numbers can be powerful.

He referenced Scripture from the book of Judges and the story of Gideon contained within its pages. Wells preached of Gideon, of Israel, a timid man who with only 300 soldiers defeated hundreds, if not thousands, of Midianites while being heavily outnumbered.

Through God’s guidance, Gideon and his soldiers surrounded the enemy’s camp and defeated the Midianites, a group that had depleted much of Israel’s resources, without dealing a single blow themselves. They did so by creating as much noise as possible, causing a panic within the camp, and the men killed each other in the chaos that ensued.

Months after a call to prayer was held at the Nelson County Courthouse in response to racial tension in the wake of the death of George Floyd while in police custody, pastors Magan and Wells decided to put words into action, bringing their churches together for fellowship.

“After the prayer time we had a couple months ago up at the courthouse we said, ‘Man, we got to put legs to something, we can’t keep talking, let’s do something. Let’s actually get our families together and send a message that we are together and that what bonds us is the Holy Spirit,’” Magan said to the dozens of people gathered.

The roughly dozen faith leaders that spoke during the June event prayed over the need for racial equality and justice, emphasizing the role faith plays in bringing about that change. They all shared a similar message as well: the need for people to come together and break down barriers.

“The fire we’re going to start today is a match, and it’s going to burn so hot that we’re going to look back one of these days and say, ‘How in the world did this take place?’” Wells said.

This Sunday, the roles will switch, with members of the Well visiting Cedar Grove Baptist Church and Magan delivering the sermon.

The idea to get the two churches together, Wells said, was the result of the two pastors’ friendship. The pastors originally intended to have other Nelson County churches participate, but they eventually dropped out.

David Turner, deacon of Cedar Grove Baptist Church, said he hoped the service on Sunday could continue to build and grow from and continue to bring together the many small churches that operate in Nelson County.

Magan said attendance has been down at The Well of Nelson since the beginning of the COVID-19 pandemic.

“It’s something that’s positive in the community that we need to have now a days because its been so separate for so long and we need to close that gap,” Turner said.

Tawanda Bowles, a member of Cedar Grove, also attended the Sunday service at The Well. She said she was “very much” looking forward to the service this Sunday.

“We should fellowship in spite of our differences,” Bowles said. “I’ve been very encouraged today, I look forward to many, many more services like this.”

A wedding held earlier this month at Wintergreen Resort has resulted in 20 staff members being quarantined as a result to potential exposure to COVID-19, an official with the resort confirmed.

The Nelson County Board of Supervisors unanimously approved a special use permit for a new retail store off U.S. 29 during an Oct. 13 meeting.

Amid the COVID-19 pandemic, the Nelson County Department of Social Services is seeing a surge in foster children with only one locally approved home, forcing officials to look outside the county.

The Nelson County Board of Supervisors will take public input during a public hearing on a proposed ordinance that would amend county code prohibiting dogs from running at large, with some exceptions.

In a 4-1 vote, the Nelson County Board of Supervisors on Oct. 13 adopted a firearm policy for animal control officers.

The Nelson County Board of Supervisors during a Tuesday meeting said they were in favor of pushing pause on the issue of the Confederate statue outside the county's courthouse, citing concerns over the current climate.

Supervisors unanimously approved two CARES Act funding requests brought before the board during a recent meeting, one of which will establish a community referral line that will connect residents with needed resources.

Pastor Dan Magan speaks at The Well of Nelson during a Sunday service that included members of Cedar Grove Baptist Church and Ridge Crest Baptist Church.

Members of the three churches bow their heads in prayer during a service Oct. 4, 2020.

Firefighters light a brush fire following a service Oct. 4, 2020, that brought the two churches together.

Pastor Butch Wells with Cedar Grove Baptist Church delivers his sermon at The Well of Nelson on Oct. 4, 2020.