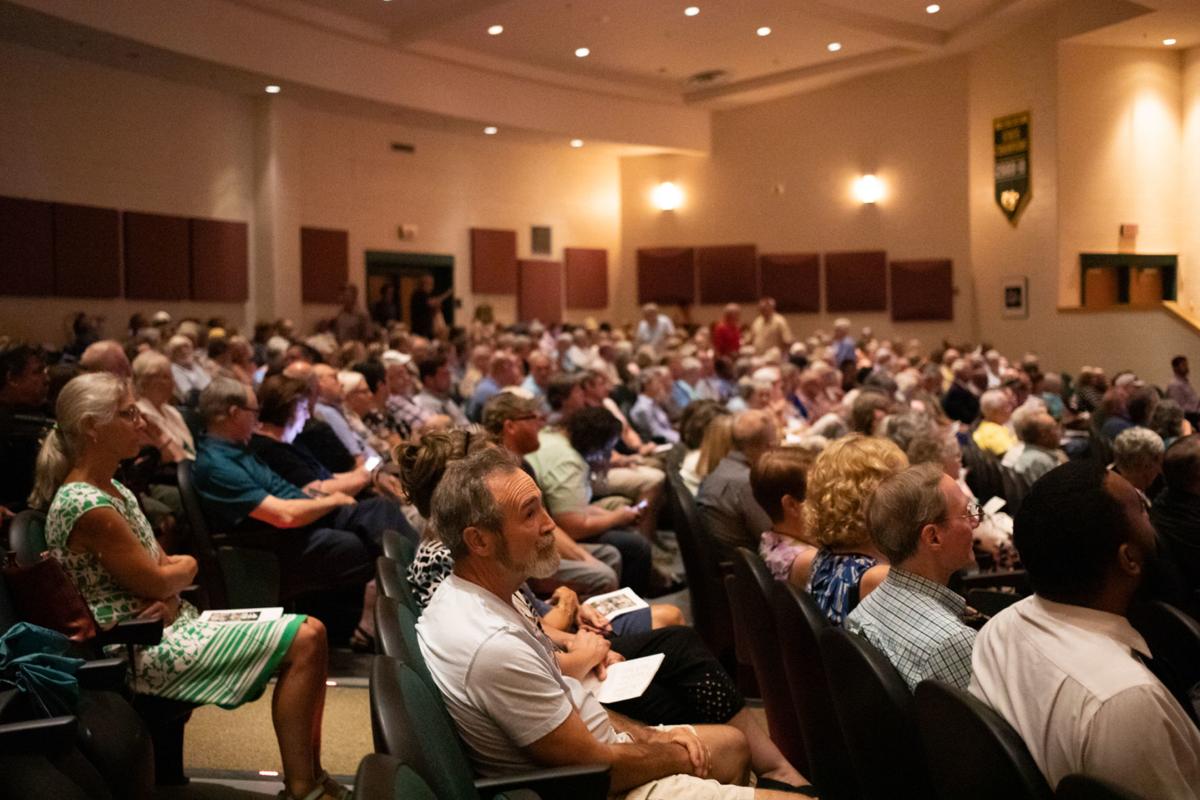 More than 200 people gather in the Nelson County High School auditorium for a commemoration ceremony recognizing 50 years since the tragedy of Hurricane Camille on Sunday, August 18, 2019. 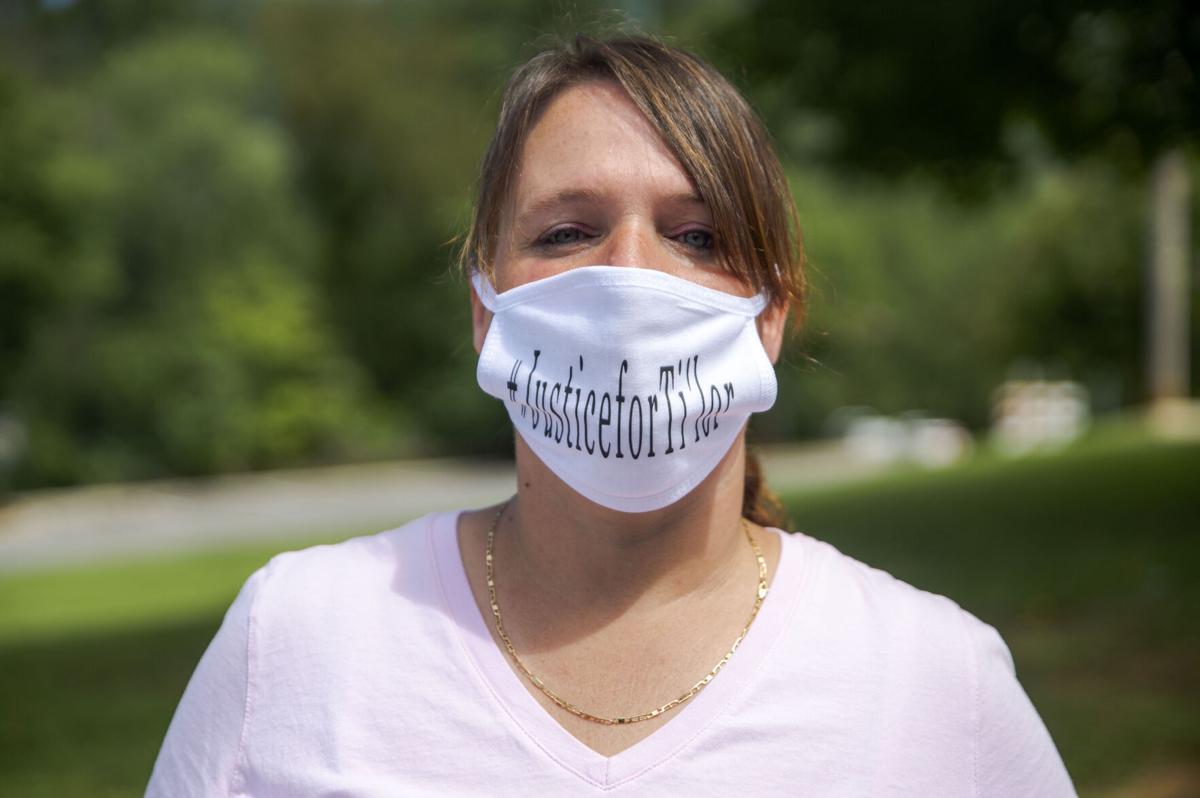 Amber Harper poses in her "#justicefortilor" mask following a demonstration demanding justice for her 15-year-old son, Ti'lor Harper, following an incident at Nelson County High School in Lovingston on Sept. 4.

During the board’s Sept. 9 meeting, Superintendent Martha Eagle looked to the board for a consensus of how to treat facilities uses in the future.

“The schools and sports teams have done a great job with mitigation and keeping numbers low, compared to what our community transmission is right now,” she said. “But currently we’ve been restricting the use [of facilities] to just smaller groups.”

She added that the schools have a health order to wear masks inside school buildings and are required to disinfect and clean.

Indoor sports are still requiring the use of masks and social distancing as much as possible within pods and the gym is the only indoor facility being used right now for the fall for volleyball.

“We are receiving some requests for use [of] facilities right now,” Eagle said. “The bluegrass music festival is coming up, the middle school music programs wanting to plan for their student play, several conversations are happening for the elementary school to do their plays. And so in reviewing this and looking at what that may be, we were trying to...be fair to every sense whether it’s the gym, whether it’s the auditorium, whether it’s the cafeteria.”

Board member George Cheape said other venues in the area are not limiting capacity so Nelson schools shouldn’t either.

Eagle reminded the board that use of outdoor facilities doesn’t have any limitations but indoor events are where they are trying to be considerate of the spread of the virus. She said it is up individual organizations and schools to determine what the capacity for indoor events should be.

Margaret Clair, the board’s chair, said she thinks it’s a good idea to restrict capacity for indoor events because of the community spread the area is experiencing and suggested the 50% capacity measure.

“I think we really need to kind of consider at least spreading people out a little bit and we have a variety of venues so if an elementary school didn’t want to restrict and wanted to invite more, they could come [to the high school],” she said.

Board member Janet Turner-Giles agreed, saying she wants as much normalcy as possible but she also wants to help keep everyone safe.

“And I am just as concerned about our students and staff as I am about the community,” she said. “I would also caution us about scheduling so that we can make sure that we have that option available to them. Let’s not schedule everything on the same day, so that we make sure to spread it out, and allow people the opportunity to use other venues as needed.”

As of Sept. 13 Nelson County had 1,131 cases of COVID-19, 14 deaths and 48 hospitalized since the pandemic began, according to the Virginia Department of Health. The county reported 937 cases on Aug. 16 and has seen 194 new cases and a death related to the virus in almost a month.

According to Ti’lor’s mother, Amber Harper, and a 58-second video that circulated on social media, Ti’lor has two chipped teeth and other minor injuries resulting from Nelson County sheriff’s deputies working to handcuff the 15-year-old who was checking on his cousin who was involved in a fight.

Nelson County Public Schools canceled classes the next day, partly because of that incident, and schools were closed again the following Monday because of unspecified threats of violence.

Michael Heavener, pastor of Adial Baptist Church and candidate running for the Nelson County School Board, said his heart goes out to the Harper family but realizes the school still doesn’t know everything that went on that day.

“But what I would like to address is the timing of the communication and in the age of social media, we just want to make sure we plan and get general information out to parents,” he said. “We’re never going to beat the students because they’re just really good at that but we shouldn’t be hours behind.”

He suggested an adequate and quick communication and response policy for the schools.

Brandy Harper, a school bus driver for NCPS, told the board that she put in her two weeks’ notice for several reasons, including treatment of staff and bullying within the schools.

She added that she is related to Ti’lor Harper and her daughter witnessed the incident.

“So my daughter witnessed the whole thing and she has taken that very hard,” she said. “She’s getting bullied at school. She’s getting cornered in the bathroom, and she’s scared. As far as me personally working for the school and for the transportation department, I don’t feel that we have the support or the appreciation from the school, period. I mean we get attitudes and eye rolling from school personnel when we ask questions about students. We get yelled at by parents; we get yelled at by students. I don’t feel like we have support backing us.”

The board heard comments but did not respond directly to the incident or remarks raised during the meeting.

Philip Purvis and Al Ponton spoke separately, each voicing concern about students having what they said is inadequate respect for authority in the schools.

“When I was in school we had fights, it’s not a new thing, kids are gonna have disagreements and they’re gonna come to blows,” Purvis said. “But there was a difference back then, we respected authority.”

Purvis believes there to be a lack of respect for authority within the schools including with teachers, bus drivers, principals, and law enforcement.

“I’m wondering if there’s not something that the school couldn’t do to educate the kids and to try to in some way or another impart to them that they need to respect authority, no matter whether they agree with it or not and that doesn’t mean that they don’t have opinions and they shouldn’t voice those opinions, but they should respect authority,” he said.

Johnette Burdette, executive director of the Nelson Heritage Center in Arrington, said many questions remain in the community and within the school for families and parents in regards to the incident.

“In other words, why it happened, what happened, what was not seen on the video, that’s neither here nor there, at this point that is an issue for the investigation and we have to trust that will come out in the investigation, but I do have a question in regards to the what happens now,” she said. “I think that as a community, as a school division, there is a sense of healing that has to happen.

Students within the high school and the middle school do have a right to have voice, to have concern and as parents, as administrators and school officials, we do need to listen to them and provide a place for them to voice those opinions.”

Susan Huffman, branch manager of the Nelson Memorial Library, thought there was no better way to introduce families to nature and books than t…

Despite drought conditions in the area over the past few months, the pollinator friendly, sensory garden planted at the Nelson Memorial Library in Lovingston last June is thriving, said branch manager and horticulturalist Yulita Ellis.

More than 200 people gather in the Nelson County High School auditorium for a commemoration ceremony recognizing 50 years since the tragedy of Hurricane Camille on Sunday, August 18, 2019.

Amber Harper poses in her "#justicefortilor" mask following a demonstration demanding justice for her 15-year-old son, Ti'lor Harper, following an incident at Nelson County High School in Lovingston on Sept. 4.