A view of homes in the village of Lovingston. 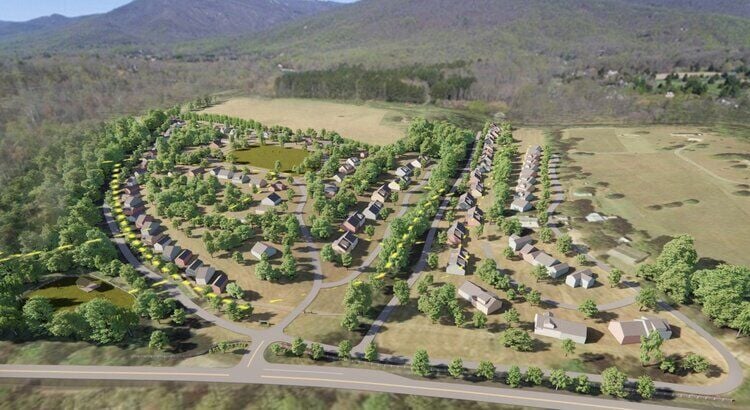 This rendering shows a concept of the Stoney Creek area housing development, Renaissance Ridge, will look like. The vision for the first phase of Renaissance Ridge is to “develop an intergenerational housing community” consisting of 60 market-rate custom cottages, homes and condominiums

“Housing can be seen as a regional issue and one that can be coordinated across jurisdictional boundaries,” said Christine Jacobs, executive director of the Thomas Jefferson Planning District Commission, during the Nelson County Board of Supervisors’ September meeting.

The plan started development in 2018 and Jacobs acknowledged the COVID-19 pandemic’s effects and the dramatic cost increases in the housing market. Affordability is relative to a person’s income, household size and where he or she lives, Jacobs said.

“We wanted a tool for housing as decisions are made locally,” Jacobs said of the plan. “This plan is intended to be a toolkit, not a guide. It’s more so benchmarking, looking at best practices and strategies that can be used as the county looks at its priorities for housing.”

The TJPDC’s member localities include the city of Charlottesville and the counties of Albemarle, Fluvanna, Greene, Louisa and Nelson.

The plan’s development included stakeholder and community meetings and Nelson residents provided some of the most diverse feedback TJDPC officials heard, Jacobs said. Nelson County has many seniors and with that comes a need for residents who want to “age in place” and not leave their homes, she said.

“Another thing we heard is a lack of varied housing options,” Jacobs said. “They would like to see more housing sizes. Not everybody wants a large single-family home. Rental options and overall supply are limited in Nelson.”

“The characteristics that make Nelson so special attract new residents, and community members expressed concerns over the lack of inventory, both in the buyer and rental markets, to meet the current demand for housing,” the plan states. “…Other factors such as zoning and land use policies that are inconsistent with the community’s desire for mixed-use and higher density, an aging housing stock, and barriers to creating new units were all cited as pressing affordable housing issues in Nelson County.”

Few rental units exist in Nelson to meet a growing demand, leading to competitive rental market and increasing rents and a lack of jobs force many residents to commute outside the county, which results to higher transportation costs and affects a household’s ability to maintain an affordable monthly housing budget, the document states.

An upcoming update to the county’s comprehensive plan, which guides growth and development, gives Nelson an opportunity to tackle affordable housing issues and identify sites for desired development patterns and uses, according to the housing plan.

Seventy-six percent of Nelson residents own their own home while the rest are renters, the plan says, and 73% of housing units in Nelson are single-unit structures, 15% are mobile homes and 12% are structures containing multiple units.

Based on 2015 American Community Survey data, 4,712 county residents commute outside Nelson for employment; 1,626 people commute into Nelson for work and 1,648 both live and work in the county.

The plan also looks at the county’s current land use, zoning districts and what is permitted in housing units by right and through special use permit. Of the roughly 492 square miles that encompass Nelson County, 15.51 square miles have underlying zoning that allows multi-family development, which are concentrated in the Wintergreen, Lovingston and Nellysford areas.

Through the TJDPC’s discussions with stakeholders and residents, including a September 2019 open house-style meeting at the Nelson Center that drew more than 30 people, four key themes emerged, the plan states:

existing zoning and land use policies are not supportive of a desire for a mix of uses and higher density in appropriate areas and serve as a barrier to creation of additional housing units;

the housing supply is shrinking, residents are not able to access services needed to rehabilitate deteriorating units and the capacity of existing resources dedicated to that mission are not sufficient;

additional rental units are needed as homestays and vacation rentals have taken units off the rental market and increased demand, which coupled with a low supply has led to a competitive market with increasing monthly rental prices; and

options for senior housing need to be expanded.

Supervisor Jesse Rutherford said factors in housing supply and the real estate and job markets change and it’s important for the board of supervisors to address housing needs in the comprehensive plan. He said land availability also is lacking for those who make less than $50,000 a year.

Chair Ernie Reed said of the demographics outlined in the plan: “We have this rising tide of age in Nelson County which further skews the numbers we’re looking at.”

Reed added the plan will be useful to the county’s planning efforts.

“It gives us a lot of to consider in the future with the comprehensive plan,” Reed said.

Due to teacher and substitute shortages, Nelson County Public Schools soon will add new pay programs for staff members who go above and beyond.

A microbrewery is cleared to open in a vacant building on U.S. 29 Business in Lovingston that most recently was used as a church.

Board denies permit request for campground

A special use permit application for a campground in Roseland was denied during the Nelson County Board of Supervisors’ Oct. 12 meeting.

Nelson County Public Schools has announced the appointment of Taylor Ashley to the position of supervisor of transportation.

The Nelson County Board of Supervisors voted during its Oct. 12 meeting to contribute $10,776 toward a community effort to install an artifici…

A view of homes in the village of Lovingston.

This rendering shows a concept of the Stoney Creek area housing development, Renaissance Ridge, will look like. The vision for the first phase of Renaissance Ridge is to “develop an intergenerational housing community” consisting of 60 market-rate custom cottages, homes and condominiums