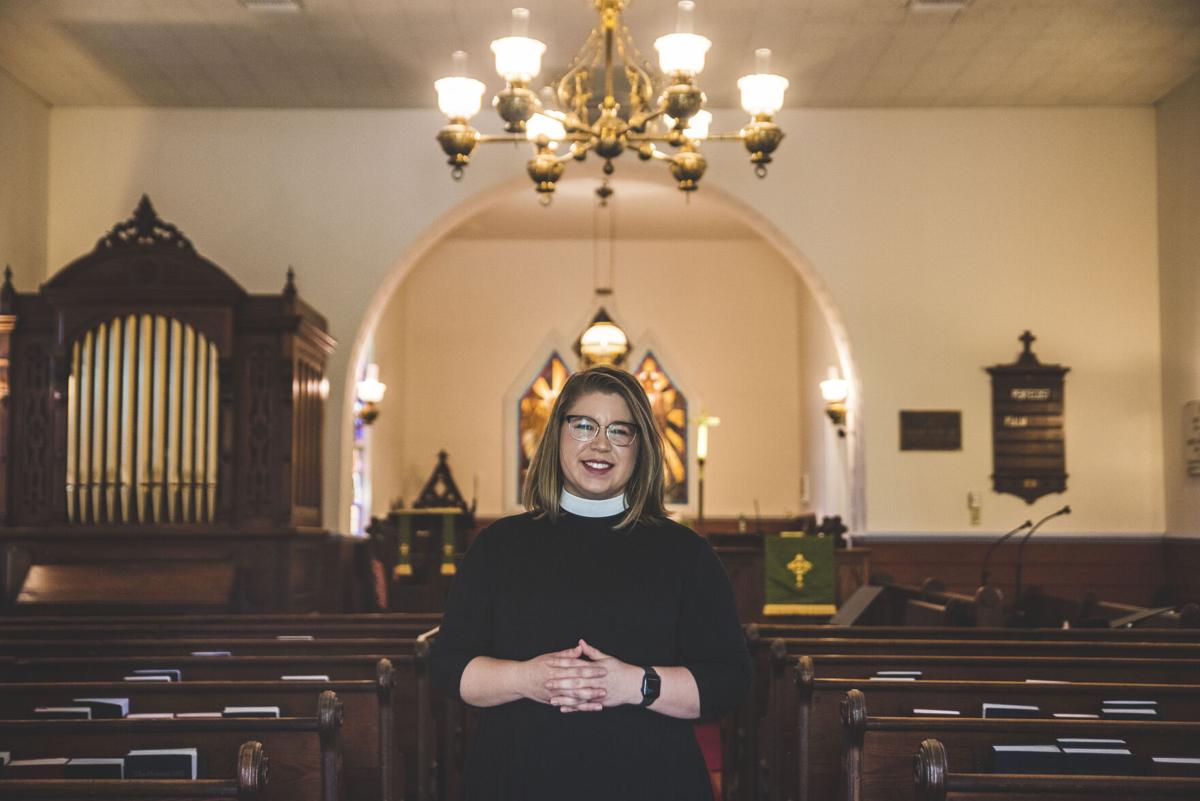 The Rev. Allison Caudill poses for a portrait in the sanctuary of St. Mark’s Episcopal Church in Amherst County on July 1. 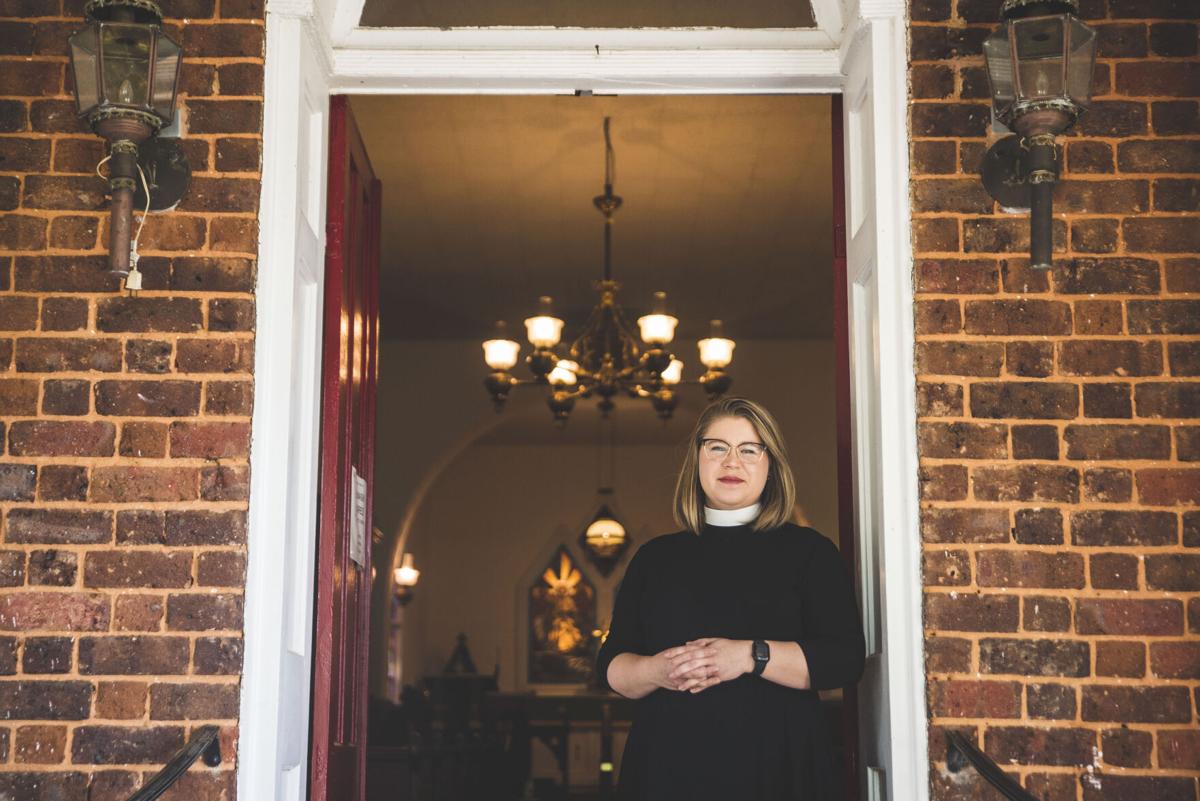 Rev. Allison Caudill poses for a portrait in the doorway of St. Mark’s Episcopal Church in Amherst County on July 1. 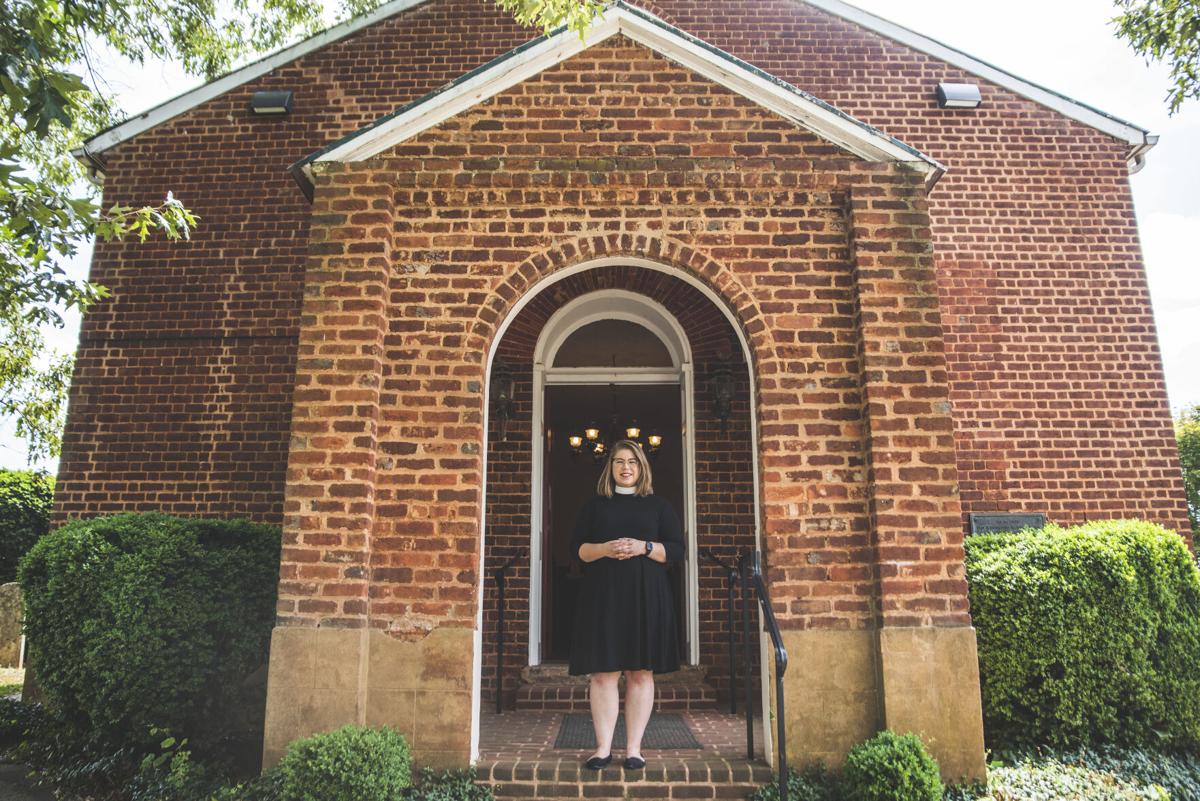 Rev. Allison Caudill poses for a portrait on the front steps of St. Mark’s Episcopal Church in Amherst County on July 1.

Caudill said she had gone to a youth weekend with a friend and attended a service at the end of that weekend led by a young woman.

Caudill became involved in ministry at an early age and has held positions in other churches before. Since a young age, she was steadfast in her conviction to pursue seminary directly after college.

“I felt very sure, especially given when and where my moment of clarity happened that it was important that I do this as a young person, and that I be visible and out there and put myself out there as a young person pursuing this and it opened up a lot of really great conversations,” Caudill said.

She went to college in Western Kentucky where she received a degree in literature and was involved with an episcopal church close to campus which gave her an opportunity to explore her faith as an individual and take more concrete steps toward ministry, she said.

Not long after graduating, she began seminary in Tennessee in August 2016 — where she met her husband — and graduated three years later.

During college, Caudill said she remembered sitting down with the campus minister to talk about the process of become ordained. In response, she said the minister presented her with a binder containing a long check list of tasks needing to be completed to reach her goal.

Caudill said asking about the process was the first step, and the minister checked it off. She kept the binder afterward, continuing to revisit it and check items off the list as they were completed.

Although she is a full-time priest, Caudill splits her time between St. Mark’s and Grace, spending two alternating Sundays per month at each church. Every week, she records her sermon so the church she is not with in-person can still be a part of the experience.

Caudill said it has been a “very fun experiment” to assimilate into the two church communities simultaneously and to craft a message that appeals to both while still maintaining the individual identities of each parish.

“It’s been kind of fun to have two parishes that are — both combined — still smaller than where I came from,” Caudill said. “It’s a gift because in a bigger parish you’re learning a bunch of subgroups and in smaller parishes you’re learning families...”

Leif Aagaard, senior warden for St. Mark’s Episcopal Church, said he has been very pleased having Caudill as priest-in-charge despite the split schedule. He added it would be difficult to try to blend the two churches’ identities.

“Each of our parishes have served different communities and we don’t want to try to merge those two identities — each one has a certain group of people we’ve been working with and we have certain projects we work on,” Aagaard said.

According to Sharon Ponton, senior warden of Grace Episcopal Church in Nelson County, the pandemic — having forced churches to adapt to different technology in order to continue disseminating weekly services — better prepared the two churches for the new system.

Caudill’s onboarding at the beginning of June also roughly coincided with Grace’s transition back to in-person services, Ponton said.

“It is just really nice to be able to regather and to have Allison participate in that regathering,” Ponton said. “It is different and we’re learning as we go and its really just great to have a priest and to be back together again.”

As Caudill eases into her new role, she said her priorities are still revealing themselves. She noted she did not want to dictate a direction for the two churches that would not fit with the community.

“One of the things that is really important to me, and I think important to both communities is that their collaboration not be confused with melding or assimilation,” Caudill said. “And then finding ways that these two communities with different gifts can offer those gifts to each other and the community.”

Caudill said she also wants to help the two churches find their footing as they return to somewhat normalcy after having been mostly online since the pandemic began. It was during the early days of the pandemic that the two churches first began worshiping together virtually, fostering the partnership that has led to splitting a full-time priest.

“So that’s a big priority for me is the reinstitution and reexamination of what was here before and understanding how the world has changed and how maybe we can live into that,” Caudill said.

Building the two small, rural churches’ memberships as well as building and sharing the unique opportunities each brings also are important to her.

“I have come to see that resources are more than just money or buildings or pieces of property. The resources that the church is made up of are people. All of these people have lives full of knowledge and wisdom and grace and opportunity to connect,” Caudill said.

Ponton said she hopes Caudill’s youth and energy can attract other young people to bolster the ranks of Grace Episcopal Church, a sentiment shared by Aagaard.

“We are hoping we can grow our congregations and we felt like someone young and with lots of energy could help us do that,” Ponton said.

As she becomes more integrated into the two communities, Caudill said she will continue to refine her message at the pulpit for those different audiences.

Through her sermons and community involvement, Caudill said she can help people lean into who they are and embrace their uniqueness.

“I’m not here to save anyone … I’m here to love them,” Caudill said. “That is my main job and that is what Jesus called me to do and what he called all of us to do.”

The Rev. Allison Caudill poses for a portrait in the sanctuary of St. Mark’s Episcopal Church in Amherst County on July 1.

Rev. Allison Caudill poses for a portrait in the doorway of St. Mark’s Episcopal Church in Amherst County on July 1.

Rev. Allison Caudill poses for a portrait on the front steps of St. Mark’s Episcopal Church in Amherst County on July 1.