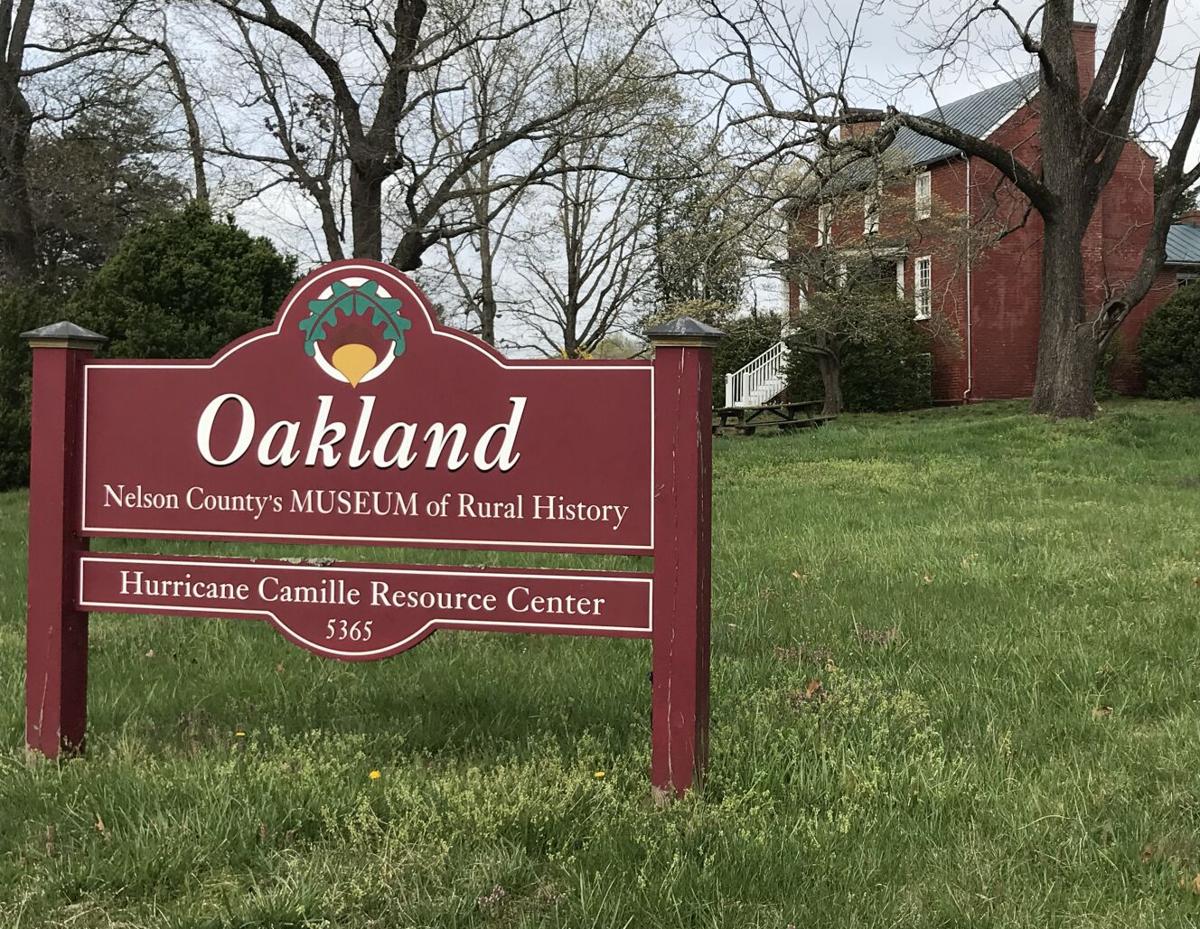 The outside of Oakland Museum in Arrington is pictured April 8. The museum has been closed since November 2019. 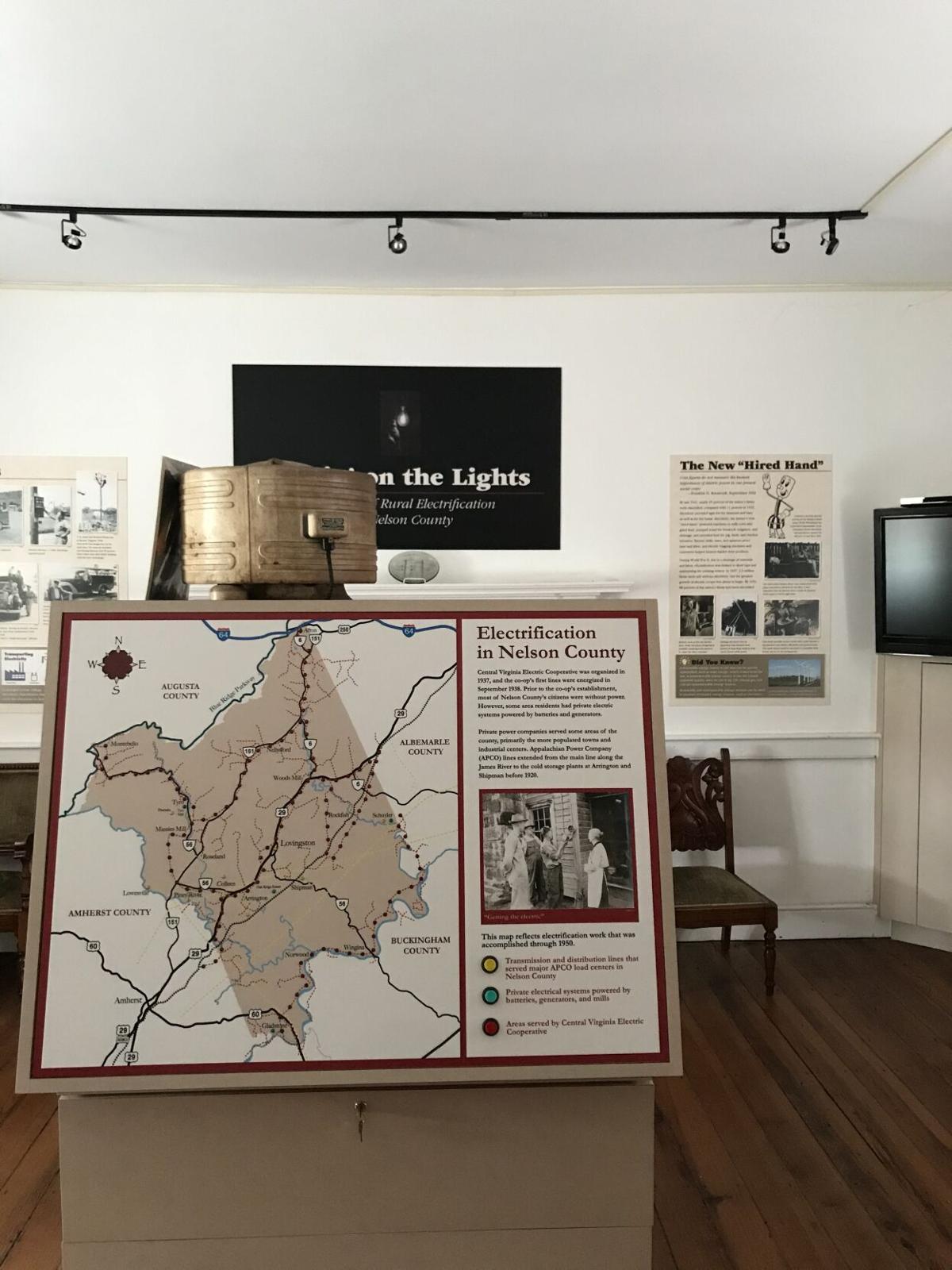 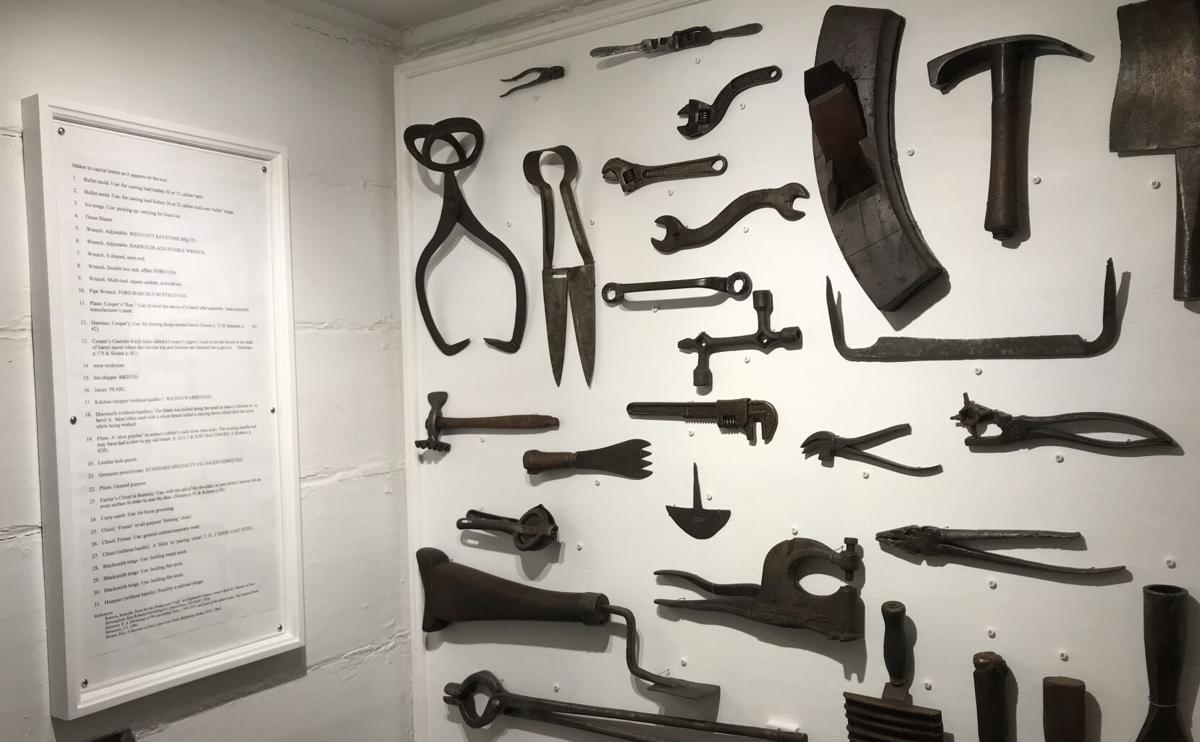 Old tools adorn the walls of the Oakland Museum and an adjacent guide describes what each tool is. 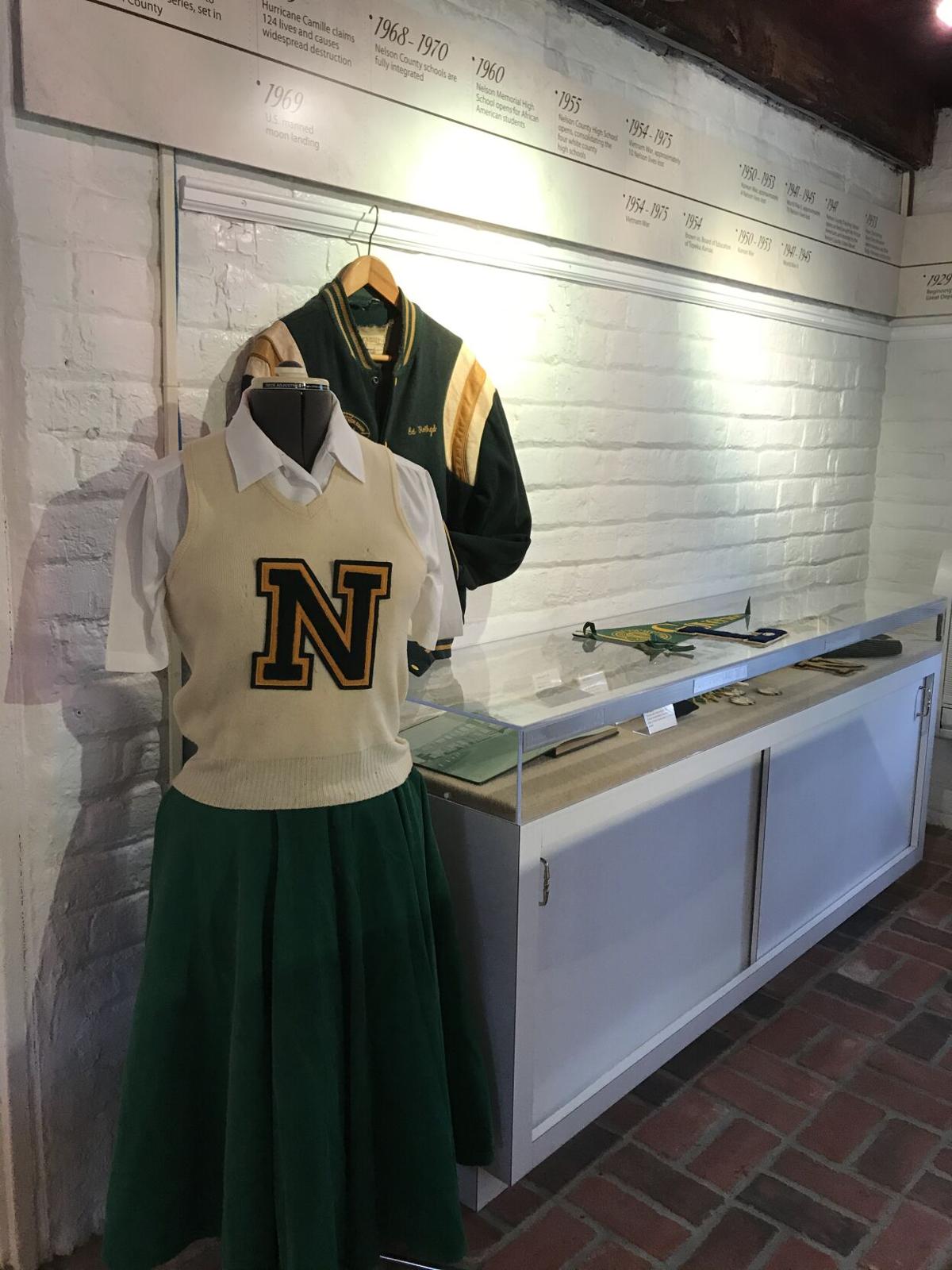 Old Nelson County High School apparel is on display as part of the new timeline exhibit at the Oakland Museum. 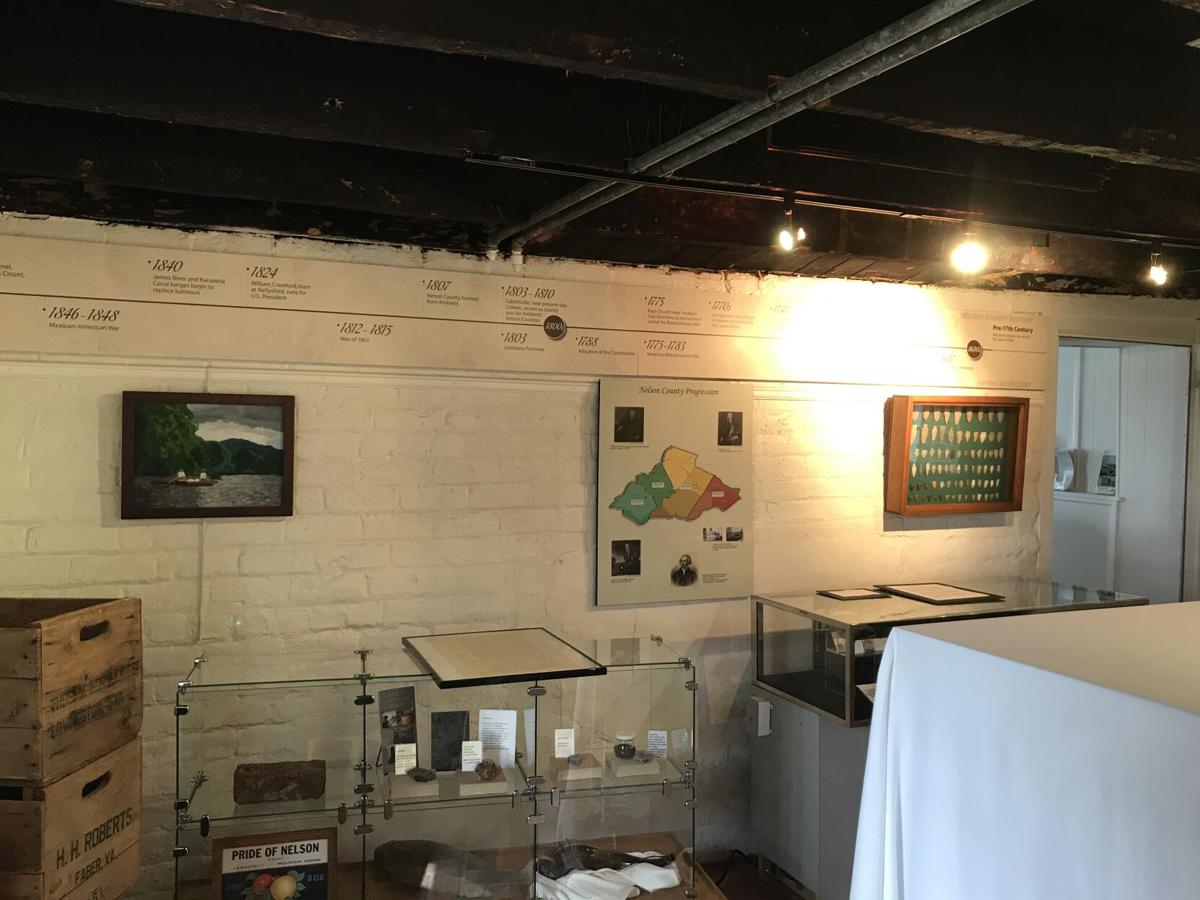 Part of the Oakland Museum's new timeline exhibit is pictured April 8, 2021. The timeline itself incorporates both local and national events.

Amid a closure that has lasted more than a year, officials with the Arrington-based Oakland Museum of rural history and Hurricane Camille resource center are hoping to regain their footing as more Nelson County residents become vaccinated.

Officials hope to reopen the museum in some capacity within the next couple months and are exploring options, such as appointment-only services, before a full-scale reopening. In November 2019, the Oakland Museum closed for the winter, a routine part of its yearly operations, but the onset of the COVID-19 pandemic in March prolonged that closure.

“We just never got to open at all last year,” Debbie Harvey, president of the Nelson County Historical Society which oversees operations of the museum, said.

Officials also are basing their reopening off the Blue Ridge Health District’s vaccination efforts, which has vaccinated roughly 41% of county resident with their first dose.

“We’re still just sort of trying to see how much of the population has been vaccinated,” Harvey said. “We want to be careful that we’re protecting our docents who have to be there and we want to be sure that other people aren’t exposed by somebody who hasn’t been vaccinated.”

Extended closures stemming from the COVID-19 pandemic is something that has affected many museums in the state. The Walton’s Mountain Museum in Schuyler also closed in March 2020, but reopened in June.

Walton’s Mountain Museum currently is open Fridays, Saturdays and Sundays from 10 a.m. to 3:30 p.m. for the month of April, according to the website.

For officials at the Oakland Museum, the additional downtime has allowed work on maintenance and developing new exhibits, which otherwise would have been a challenge to incorporate, given the short window the winter closure provides.

New exhibits include a timeline room — the first exhibit museum goers will see as they navigate the building that once served as a tavern during the first half of 19th century — which dates back to the founding of Nelson County to the 2000s and incorporates both local and American history.

The exhibit is created with the intent to modify later on, rotating or adding new displays, Harvey said. Also new to the museum is an updated Hurricane Camille exhibit and TV channel that captures “in a way everything we have collected on Camille.”

Harvey said this channel will allow people to focus in on specific communities or testimonials or explore on a “high level” what Camille is and how the second most intense tropical cyclone to strike the United States devastated the county, resulting in flooding, landslides and dozens of fatalities.

“The goal is pretty much anything we have recorded or have been able to digitize we want to make available there in a visual format and allow people to go to what they want,” Harvey said.

Harvey said officials want to open “in a big way” once it is safe to do so, but to do so now and bring in a high volume of people would be difficult for the circa-1800s building with its tight turns and corridors would make adequate social distancing challenging.

“Space is a premium and once you place exhibits and displays in there — it very much captures the time period — but it limits the amount of people you can host at one time,” she said.

Being completely supported by donations, Harvey said the pandemic affected the museum’s bottom line and it operated at a loss last year as many people make donations as they come through the building or participate in programs. She added there is a need for volunteers.

Harvey said the museum experienced an abnormally high volume of patrons in 2019, which coincided with the 50th anniversary of Hurricane Camille. All that momentum, however, was lost as the pandemic hit.

“Its kind of like we went from the absolute best year ever I would venture to say to zero,” Harvey said.

Update: Portion of U.S. 250 will remain closed for 'extended period' as debris continues to fall

Update: A portion Rockfish Gap Turnpike will remain closed for an "extended period" following a Monday rockslide, according to an update Wedne…

"It feels like everything that I've done so far in life has prepared me for something like this and yet I had no idea that a position like this would ever exist," Kristen Musselman said.

A Rustburg man was killed Tuesday after a tree fell on a vehicle in the Monroe area of Amherst County, the county's chief public safety official confirmed.

Nelson County Public Schools is on the hunt for a new person to take the helm of the county’s only middle school for the 2021-22 school year.

Sitting at her desk in what used to be the administrative offices of Nelson County’s former segregated high school, Johnette Burdette said she…

“We’re still seeing big gains in the outlying areas because they have the inventory and, for the prices, we have a great portion of the area population that can afford homes there.”

A proposed 184-foot Class C monopole cell tower has gained the support of the Nelson County Planning Commission. The request now will go before the county's board of supervisors in the coming months for final approval.

The outside of Oakland Museum in Arrington is pictured April 8. The museum has been closed since November 2019.

Old tools adorn the walls of the Oakland Museum and an adjacent guide describes what each tool is.

Old Nelson County High School apparel is on display as part of the new timeline exhibit at the Oakland Museum.

Part of the Oakland Museum's new timeline exhibit is pictured April 8, 2021. The timeline itself incorporates both local and national events.