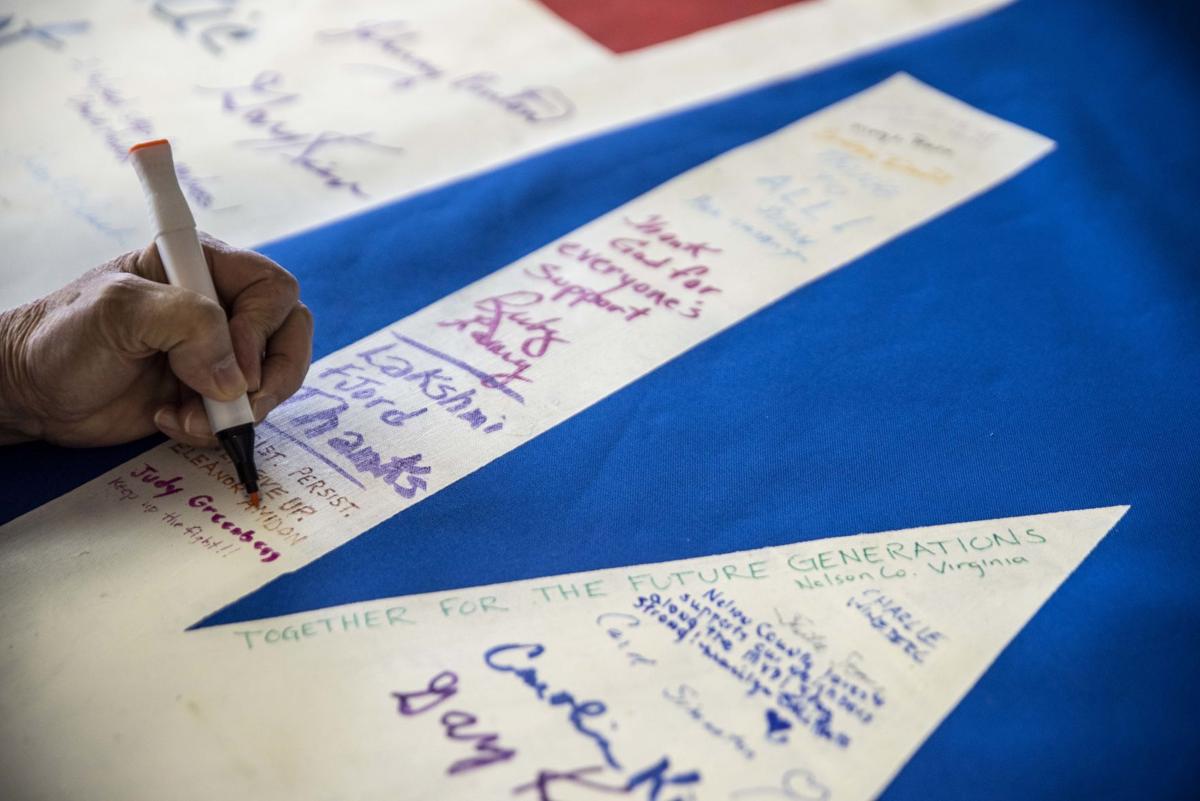 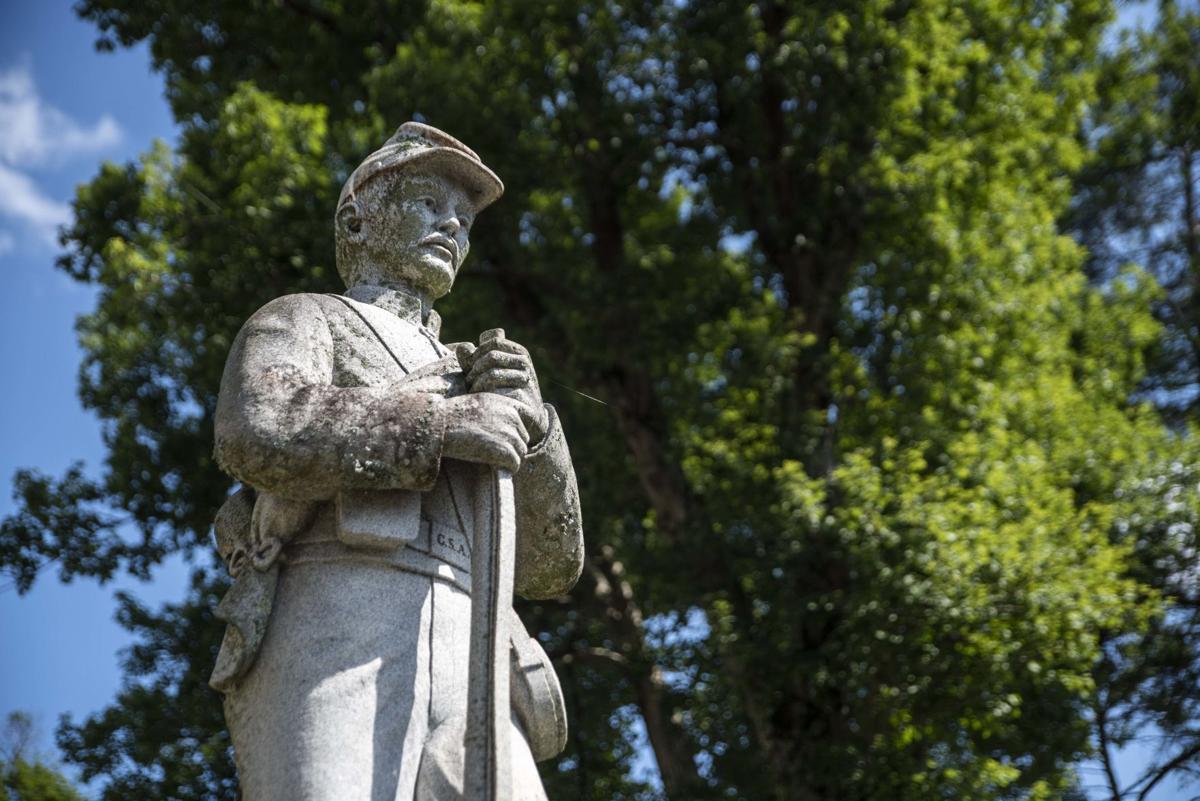 A statue honoring confederate soldiers stands on the grounds of the Nelson County Courthouse in Lovingston on Tuesday, July 14, 2020. 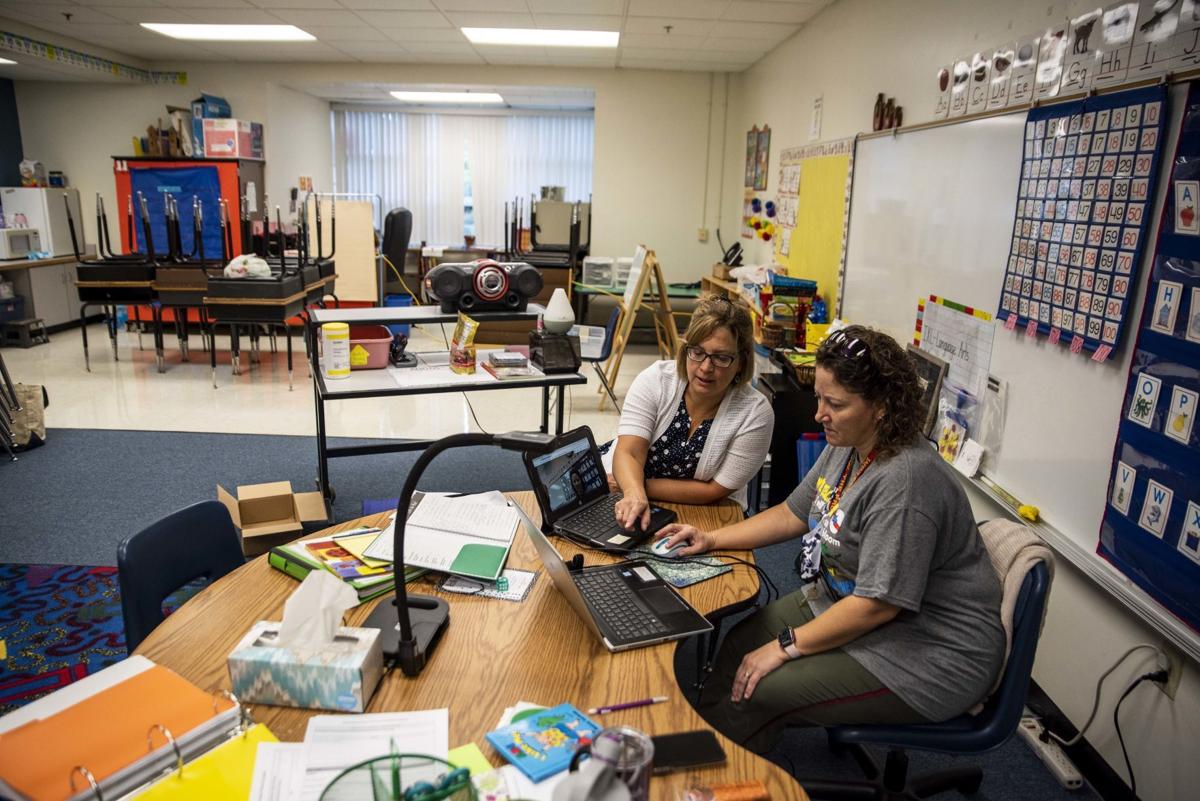 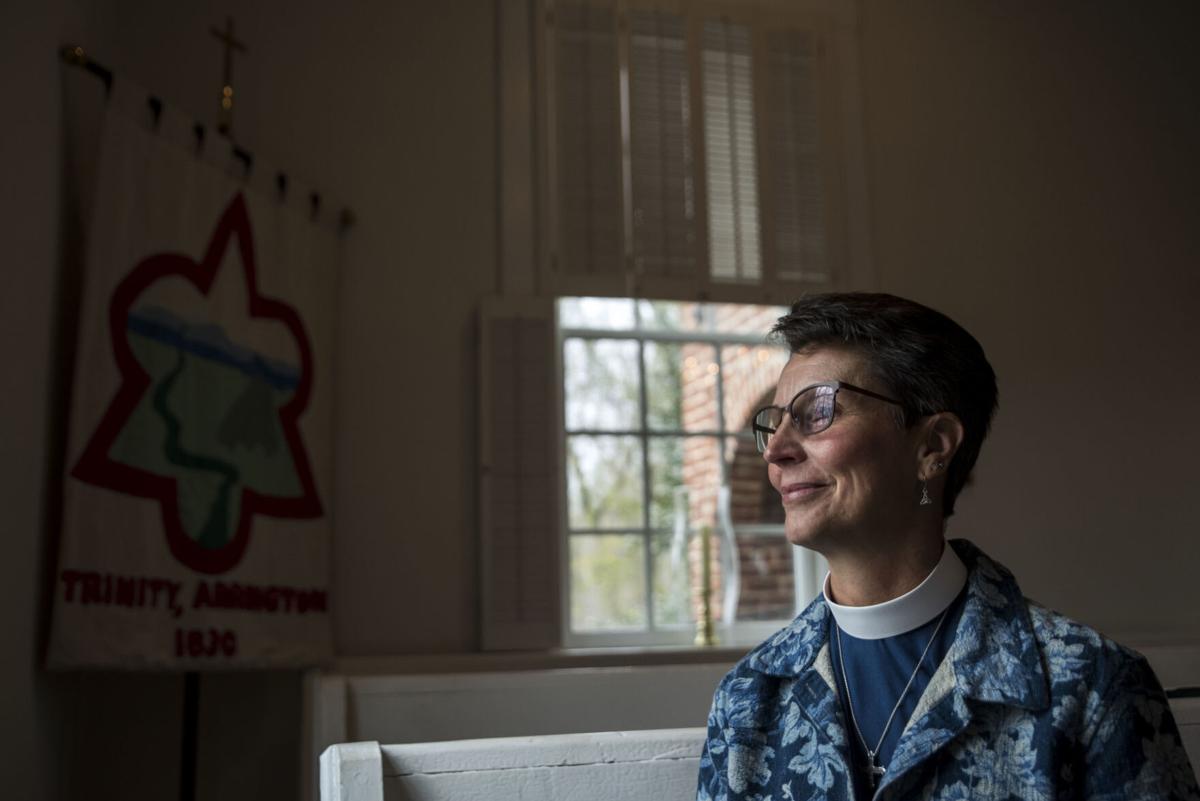 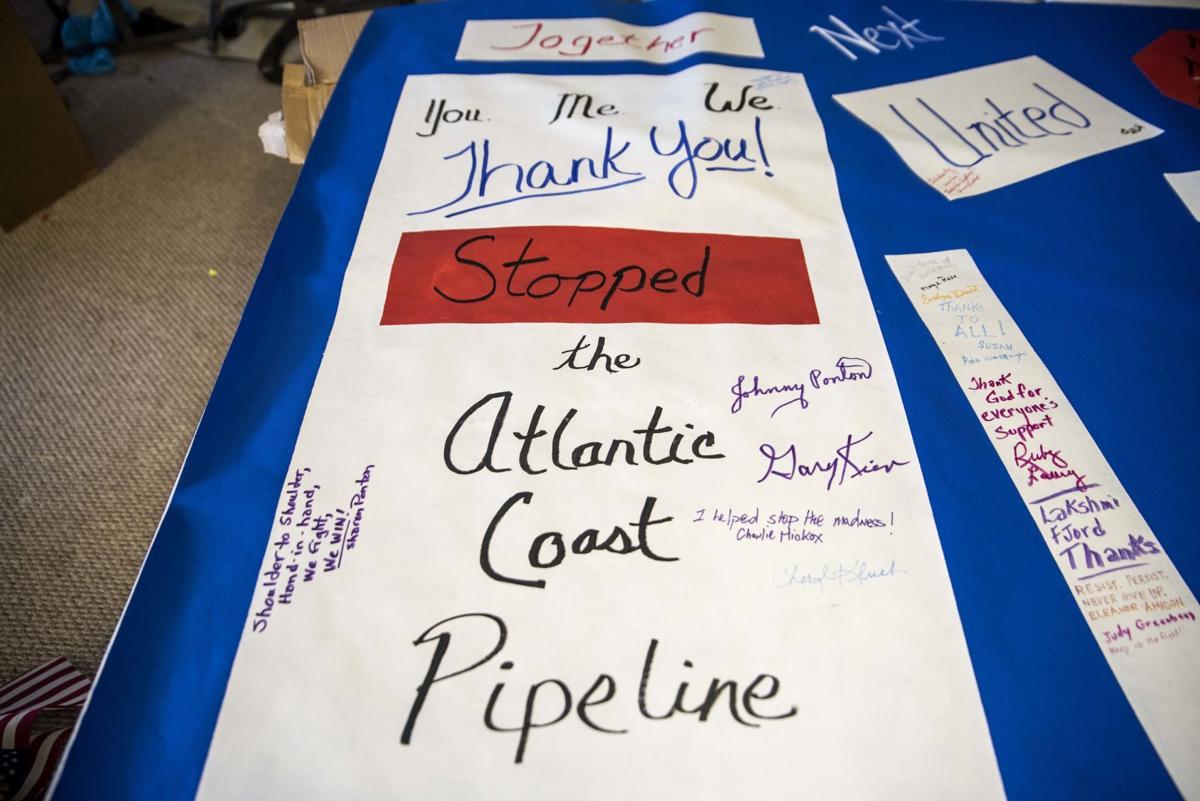 A banner celebrating the cancelation of the Atlantic Coast Pipeline has been signed by many of those who were involved in the fight in Nelson County, Virginia on Thursday, July 24, 2020. Members of the Nelson County community had been fighting for six years for the cancelation of the pipeline and on July 5 they won the fight. The banner will be passed to other organizations around the state who joined the fight and will eventually be sent to Southwestern Virginia to show support to those who are currently fighting against the Mountain Valley Pipeline. 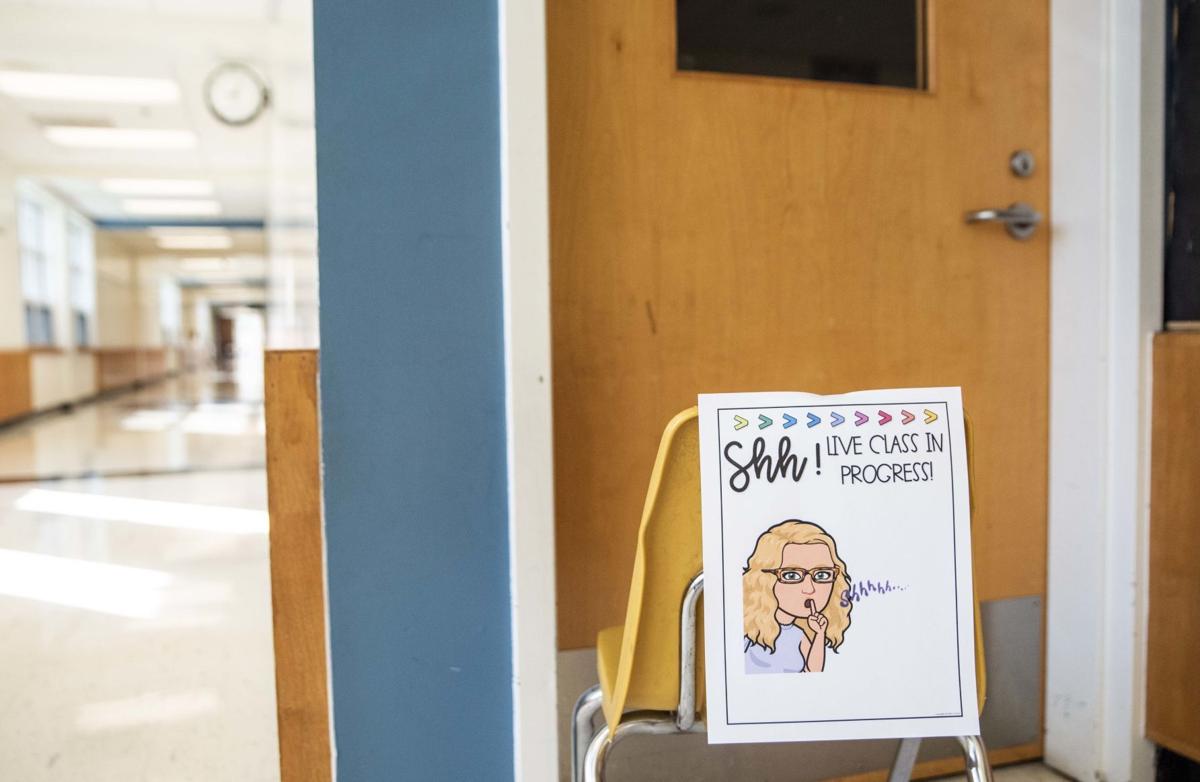 A sign sits outside of third grade teacher Brandy Watts' classroom alerts others she is on a video call with her students during the first day of remote learning at Rockfish River Elementary School in Nelson County on Monday, Aug. 24, 2020. 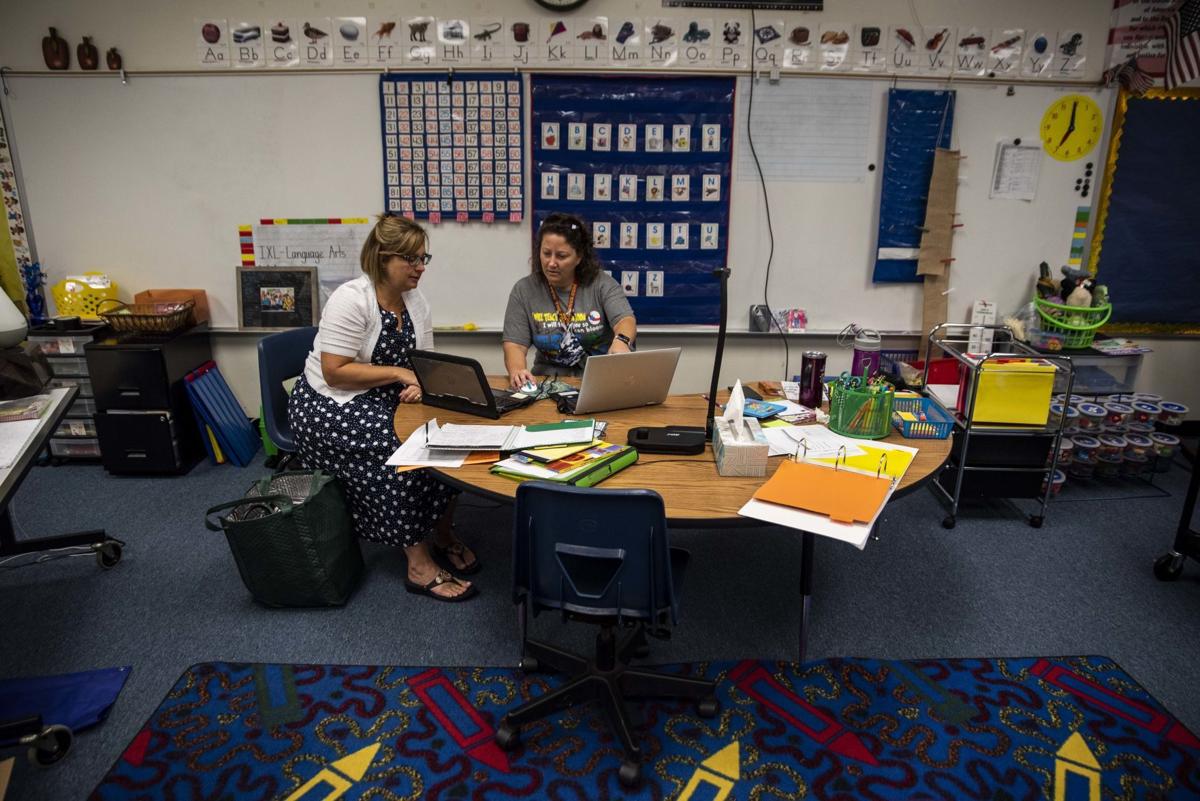 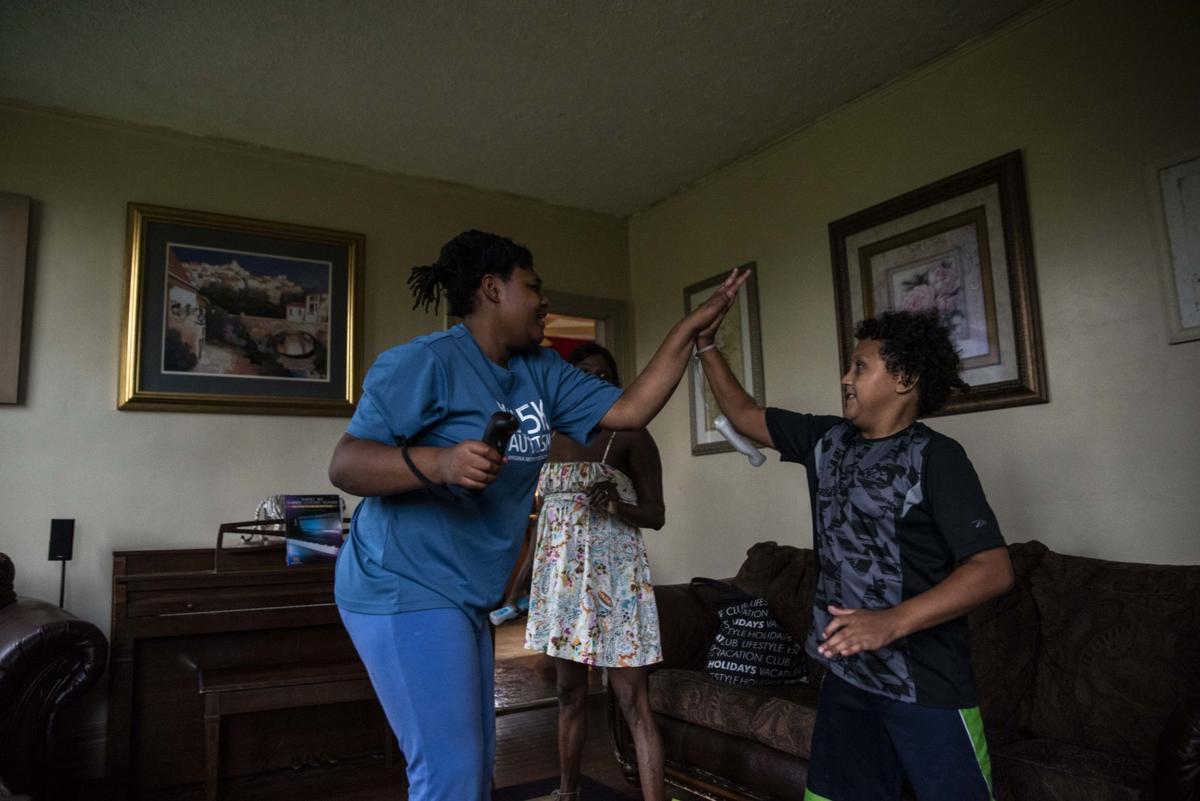 Azalia Berrian high-fives her brother, Akhenaten Graver, while playing Just Dance in the living room of their home in Afton on Aug. 13. Azalia now wears an ankle monitor.

Upon hearing news of the Atlantic Coast Pipeline’s cancellation in early July, Nelson County resident Richard Averitt, who was staunchly opposed to the project, said and his family went out to their porch and screamed in jubilation before popping bottles of champagne. It made total sense. Real people were at the center of a drawn-out fight over the multi-billion-dollar interstate natural-gas project.

There’s no doubt this story represents one of the biggest in Nelson County in years because so many people, both against and for the project, were deeply affected.

The decision from the Nelson County School Board to begin the fall 2020 semester in an entirely online format in response to the COVID-19 pandemic — and subsequent votes to extend that through the spring 2021 semester — was one of the more polarizing decisions to be made by local government this year. It was a decision that left some families in shock, scratching their heads as to how they would support their children’s education while leaving others with a sense of comfort knowing loved ones may be far safer at home.

Later reports from school officials showed the online format resulted in far more failing grades across primary and secondary grade levels and students unable to meet academic benchmarks compared to previous years. Problems only were exacerbated by spotty access to internet throughout the county as surveys showed about 30% of families did not have access to reliable internet at home.

In the aftermath of the killing of George Floyd while in police custody in May, calls for the removal of Confederate monuments in Virginia quickly followed. And in Nelson County, a statue depicting a Confederate soldier located on the county’s courthouse grounds soon would find itself in the spotlight as well when Rev. James Rose requested the Nelson Board of Supervisors remove and relocate the monument.

Rose’s request to the board would spark passionate discussion and subsequent comments to the board of supervisors during other meetings from both sides of the issue. As a reporter for a local newspaper, my primary goal is to generate discussion among the community on issues that matter, giving readers the necessary, factual and unbiased information they need to reach their own conclusions. While I hope I achieve that goal to some degree with every story I write, no other story in my opinion this year has generated this level of community discussion.

4. Sentenced to life, man charged in capital murder paroled after less than 30 years

Horace Eugene Burnette, one of three men convicted of a 1990 murder-for-hire plot of two Afton women that resulted in a life sentence and led to multiple convictions, was granted parole in April by the Virginia Parole Board after serving less than 30 years in incarceration. It was a historically significant case as well, being the first capital murder to occur in the county. Virgil S. Fox Jr. had enlisted Burnette to help his son Virgil S. Fox III to kill elder Fox’s mother, Lillian Fox, and sister Carolyn Fox, in order to collect thousands in insurance money and property from the women’s estates.

Nelson county Commonwealth’s Attorney Daniel Rutherford described Burnette’s release as “absolutely frustrating” and a travesty at the time. Tonya Chapman, the recently appointed chair of the Virginia Parole Board, defended the board’s decision.

This was one of those occasional “silver lining” stories that doted 2020. It’s common knowledge at this point that the pandemic has affected almost every aspect of everyday life. Church’s in Nelson County and elsewhere have had to reinvent how they reach their audience. Yet despite those struggles, Trinity Episcopal Church in Arrington achieved a milestone when it welcomed its first full-time pastor in its history.

Rev. Donna Steckline, now a couple months into the job, provided the perfect motto to take through this year and beyond: “Blessed are the flexible for they won’t be bent out of shape.”

Nelson County has continued to make strides toward its goal of universal broadband coverage for the citizens who call the rural area home, and a $1.25 million deal between the county and Firefly Fiber Broadband provided a roadmap to get there by the end of 2024. The pandemic this year coupled with remote learning and telework has made clear the digital divide that exists in Nelson County as officials have raced to make internet services available in unserved and underserved areas. The agreement by the Nelson County Broadband Authority and Firefly also continues the recent trend of connecting customers off the Central Virginia Electric Cooperative’s system without slowing down those builds.

Despite the heaviness of 2020, there were the occasional stories that brought light to an otherwise doom and gloom filled year. The Avagyans, who own and operate Double H Farm, fulfilling their journey to citizenship after about 17 years of struggles and hardships was one such story. Having immigrated from Armenia in 2003, the family of four wasn’t going to let the pandemic delay their dreams any longer. Just in time for the July 4 holiday, Ara, Gayane and their daughter Ludi Avagyan had ample reason to celebrate. Ara and Gayane’s son, Samson Avagyan, would soon achieve citizenship status as well.

While only recently having achieved their goal, the family has always called Nelson County home and, with their certificates in hand, that feeling only deepened. Speaking with the Avagyans I got a taste of the kind, hardworking people they are and I’m pleased I got to be the one to help share their story.

It’s every parent’s worse nightmare to wake up and learn one of their children is no where to be found, and that’s the exact scenario that would come to pass for Joanna Graver when her daughter, Azalia Berrian, became separated from the rest of her family following a bike ride June 4. Azalia, being only 14 years old with special needs, was deemed to be endangered because of her cognitive delays and lacking communication skills and Virginia State Police issued an Endangered Missing Child Alert the next morning. In almost no time at all law enforcement, search and rescue groups and the Nelson County community stepped up to help the family in their search. It would take officials four days before safely locating Azalia.

Being a reporter in Nelson County, I often hear of and experience how community oriented the people who live here are. This story was a shining example of that community- minded mentality in action.

To describe U.S. Army Ranger Sgt. John William Rucker as a hero could be an understatement to some and fails to paint a full portrait of his bravery in the face of unsurmountable odds. In 1970 during the Vietnam War, Rucker, along with five other Rangers, opened fire on a company of enemy soldiers, heavily outnumbering the men who had only their rucksacks to shield them from the barrage of enemy fire. Rucker died from his wounds that same day.

Now, 50 years later, U.S. Air Force Veteran Edrie Marquez, who transported Rucker’s remains to Taiwan to be taken back to his family in time for the Christmas season, and veteran Michael Rubinstein, who was wounded in the same firefight that killed Rucker, traveled to Jonesboro Cemetery to share their stories.

I’ve had the pleasure of speaking with several Nelson County veterans during my first year as a reporter with the Nelson County Times, and learning the stories of those who have served is always a humbling experience. I doubt I’ll ever forget Rucker and his sacrifice.

The completion of the Blue Ridge Tunnel project marked the end of a 20-year endeavor by the county marred with delays and setbacks. It was clear just days after opening residents in Nelson County and beyond were eager to walk the historical tunnel after two decades, coupled with the Thanksgiving holiday and the pandemic, resulting in thousands of visitors within the first days of its reopening.

In late September, Tamara Stone, despite not having any symptoms, could feel something had come over her. Something wasn’t right.

One day after Virginia hit a record high for new cases of COVID-19, the Blue Ridge Health District has transitioned into its next phase for vaccinations which "dramatically" increases availability of the shots.

A multi-agency operation has resulted in the arrests of four individuals, two from Nelson County, and seizures of more than a dozen firearms and more than $150,000 worth of narcotics.

In response to rising cases of COVID-19 in the county, Nelson Memorial Library has suspended its appointment services and is operating for the…

In the aftermath of a COVID-19 surge that forced the closure of several county government offices to the public, the county has reintroduced a rotational schedule for staff and extended a program that encourages teleworking.

A federal cleanup effort has stretched into the new year as officials continue their assessment and necessary removal of hazardous materials at the U.S. Titanium Superfund Site in Piney River.

For several weeks, if not months, Nelson County was a rural refuge from the pandemic that raged around the county on all sides.

Grappling with the COVID-19 pandemic, Wintergreen Resort has implemented several changes this year to how the mountain operates.

Norfolk Southern Railroad will begin closing grade crossings the week of Jan. 18 to perform track repairs in Nelson County between Oakridge an…

A statue honoring confederate soldiers stands on the grounds of the Nelson County Courthouse in Lovingston on Tuesday, July 14, 2020.

A banner celebrating the cancelation of the Atlantic Coast Pipeline has been signed by many of those who were involved in the fight in Nelson County, Virginia on Thursday, July 24, 2020. Members of the Nelson County community had been fighting for six years for the cancelation of the pipeline and on July 5 they won the fight. The banner will be passed to other organizations around the state who joined the fight and will eventually be sent to Southwestern Virginia to show support to those who are currently fighting against the Mountain Valley Pipeline.

A sign sits outside of third grade teacher Brandy Watts' classroom alerts others she is on a video call with her students during the first day of remote learning at Rockfish River Elementary School in Nelson County on Monday, Aug. 24, 2020.

Azalia Berrian high-fives her brother, Akhenaten Graver, while playing Just Dance in the living room of their home in Afton on Aug. 13. Azalia now wears an ankle monitor.