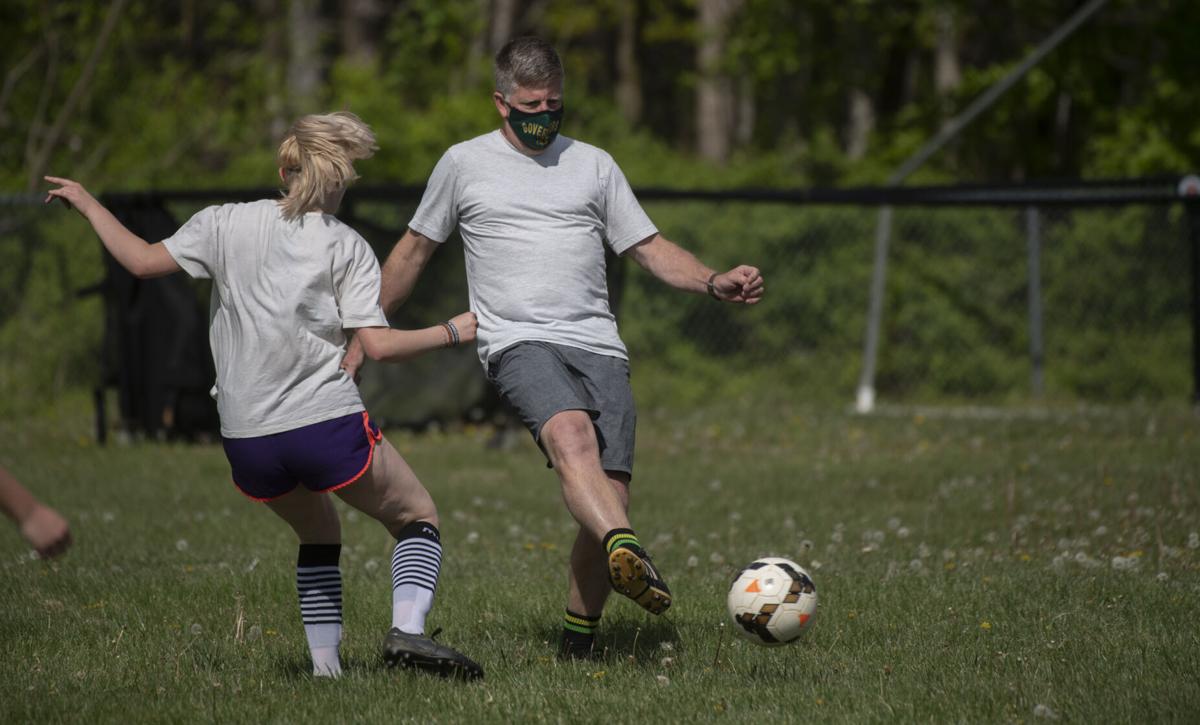 Ferren joins his team in drills.

Lady Gov Maddie Jenny stretches out prior to a recent practice. 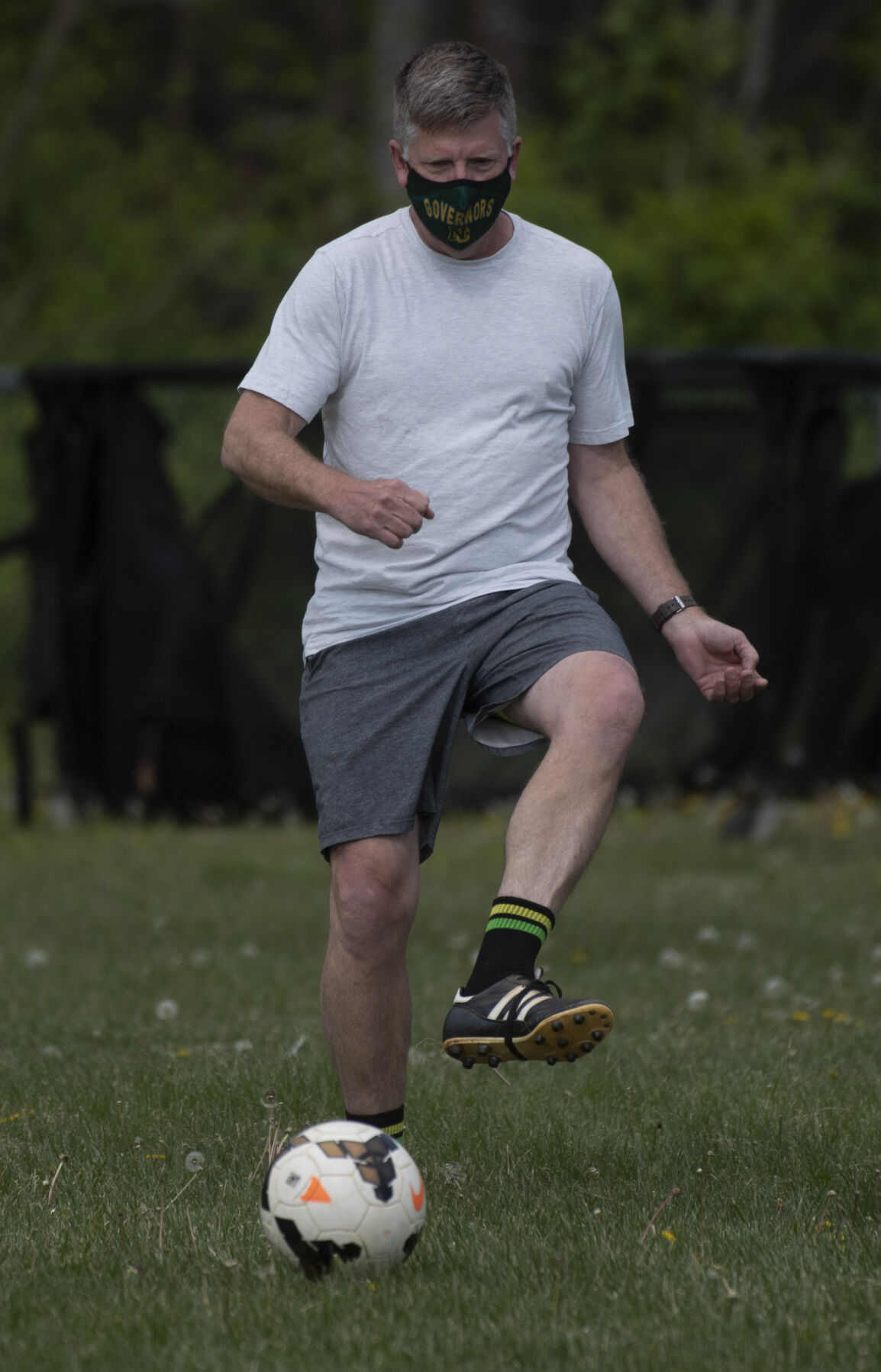 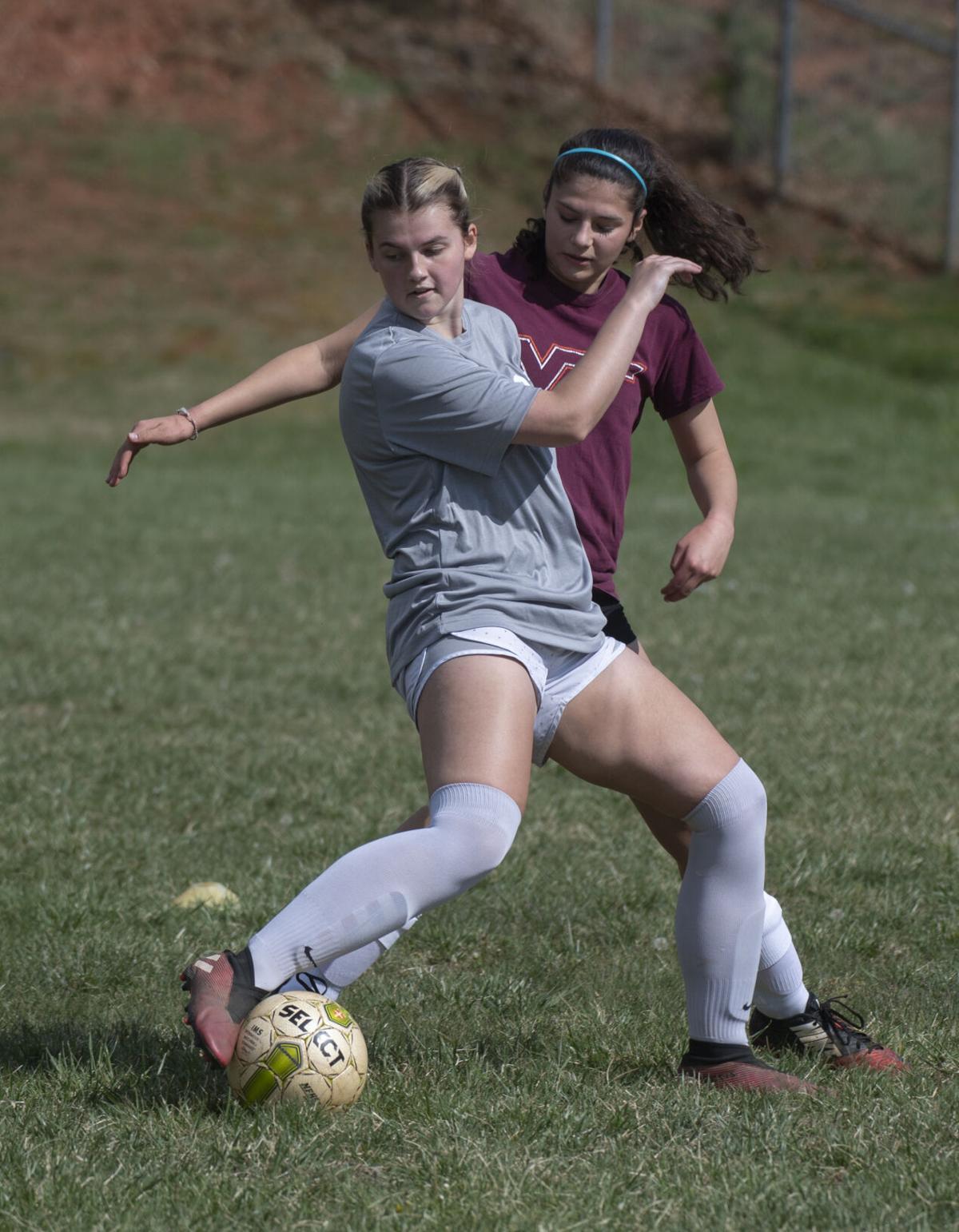 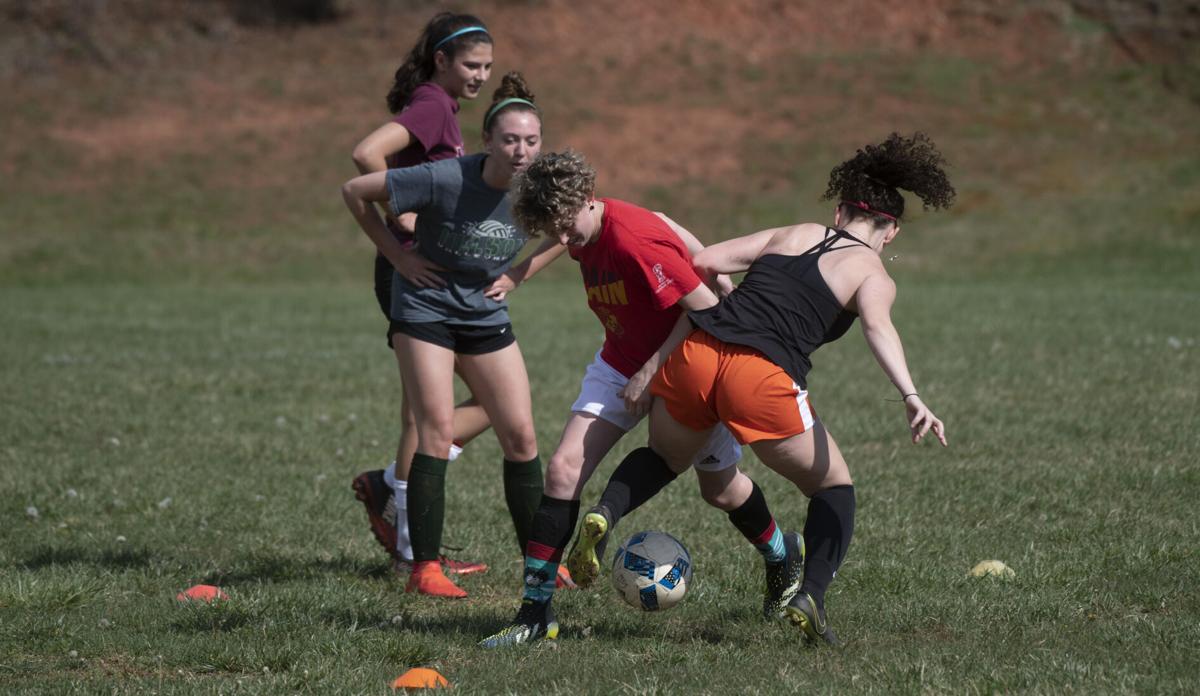 Lady Govs battle for ball control during a recent practice.

The Lady Govs soccer season preparations are well underway as returning coach Bryan Ferren and his team have been practicing and running drill for a few weeks.

Ferren was pleased that he has a talented core of returning players. He recently commented on each.

Lauren Armstrong: “Three-year starter as a wing taking advantage of her speed and playing an important part of our attack. Lauren will also help out in the midfield this season distributing the ball to our forwards.”

Madison Jenney: “Three-year starter, first team all-district at center back and is the heart of our defense back line. She is responsible for organizing the defensive side of the ball and brings leadership to our younger players.”

Francesca Nicks: “Two-year starter as forward playing the wing position helping to keep the wide and spread the defense. She will split time this season as a wing and helping to control the midfield.”

Summer Scruggs: “Three-year starter, first team all-district is very creative on the ball and has been our high scorer the past two seasons as center forward. This season we are looking forward to seeing how she can also contribute at other positions on both sides of the ball.”

Ella Manthey: “Three-year starter who has consistently contributed at multiple positions on the field. This season she will be helping control the midfield both offensively and defensively.”

Rylee Truslow: “Three-year starter, first team all-district who keeps us in every game with her aggressive play as keeper. This season she will be an integral part in starting our attack out of the back.”

“We have a young team with a smaller roster this season, so we need to work on teamwork and the three things we focus on each season quality of passes, first touch and defending as a single unit,” Ferren said. “If we do these things well, we will be able possess the ball, find different lines of attack while keeping the ball out of our goal.”

Ferren is thankful for several things during the pandemic.

“I am thankful to be back working with the girls after our shortened 2020 season and excited to be working again with Sarah Wells, our JV coach who came aboard last season,” said Ferren. “This season we have a new addition to the girls coaching staff, Kyle Inlow as an assistant coach. Kyle teaches PE at Rockfish River Elementary School and has played soccer all his life. He has been a great compliment to Sarah and myself.”

The Govs soccer team, coming off its first loss of the season last week to Dan River, battled the Raiders last Friday and won the match 2-1 in…

The Govs soccer team is sporting an undefeated record with six wins and one tie with its latest victory coming in Chatham with a 4-0 win on May 26.

The Lady Govs soccer team picked up a pair of wins this past week with shutouts against both Chatham and Altavista but in between Alleghany managed to defeat the Nelson squad 5-1.

Ferren joins his team in drills.

Lady Gov Maddie Jenny stretches out prior to a recent practice.

Lady Govs battle for ball control during a recent practice.