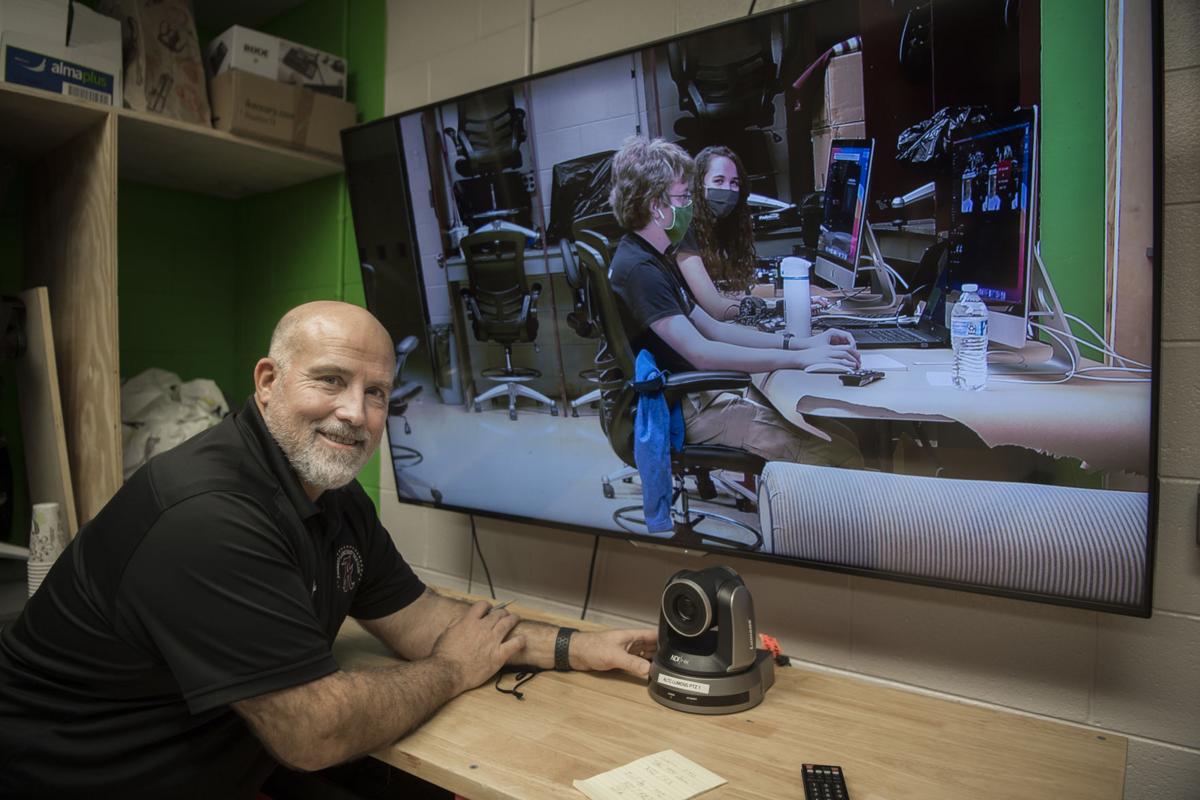 Mike Cargill, advisor of the Amherst Lancers Tech Club, poses with one of the main high tech cameras that will be used to stream athletic events .On the screen are two of his media students, Peter Garrison, left, and Grace Stinson. 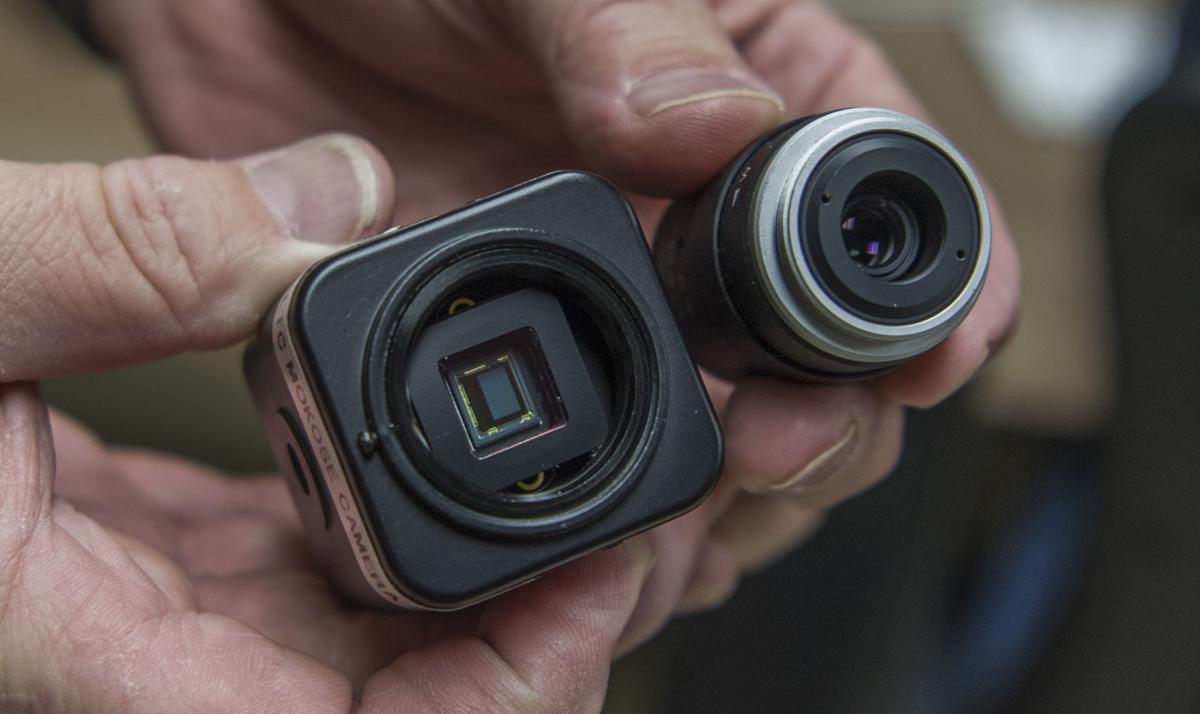 Mike Cargill, digital media communications manager for Amherst County Public Schools, holds one of the remote cameras (left) and a lens. These will be attached to the basketball goals when the season starts, which helps in streaming games. 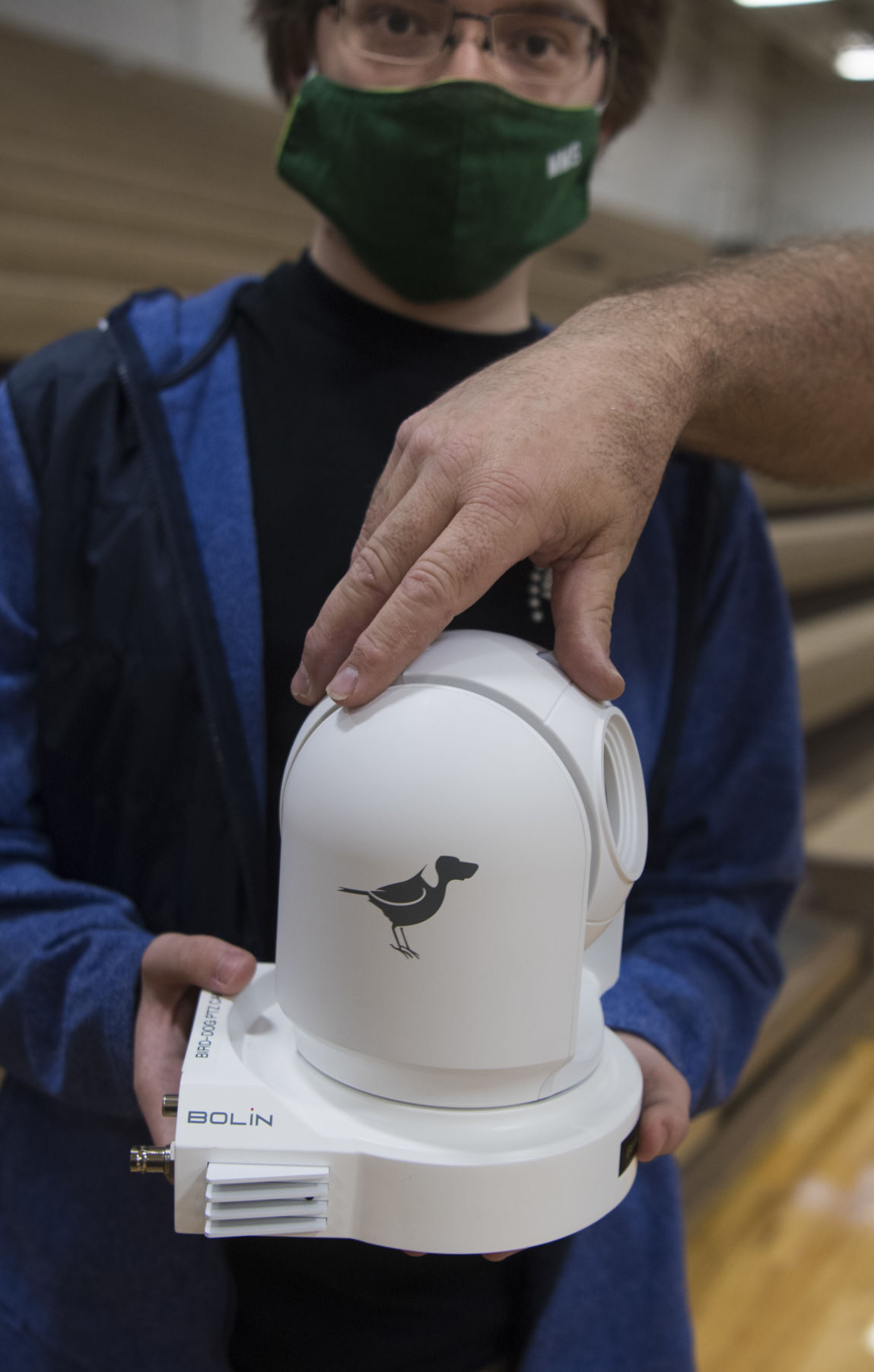 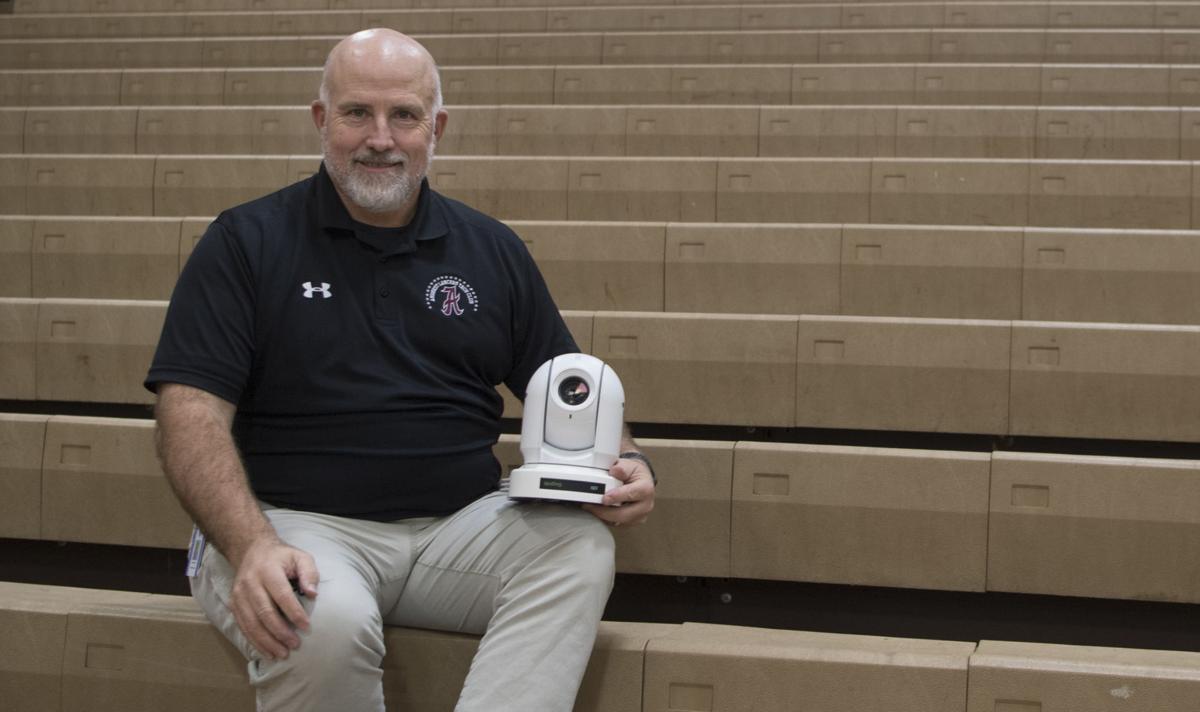 Mike Cargill, pictured Jan. 4 at Amherst County High School's gym, holds one of many high tech cameras the Amherst Lancer Tech Club will use to stream games this season. 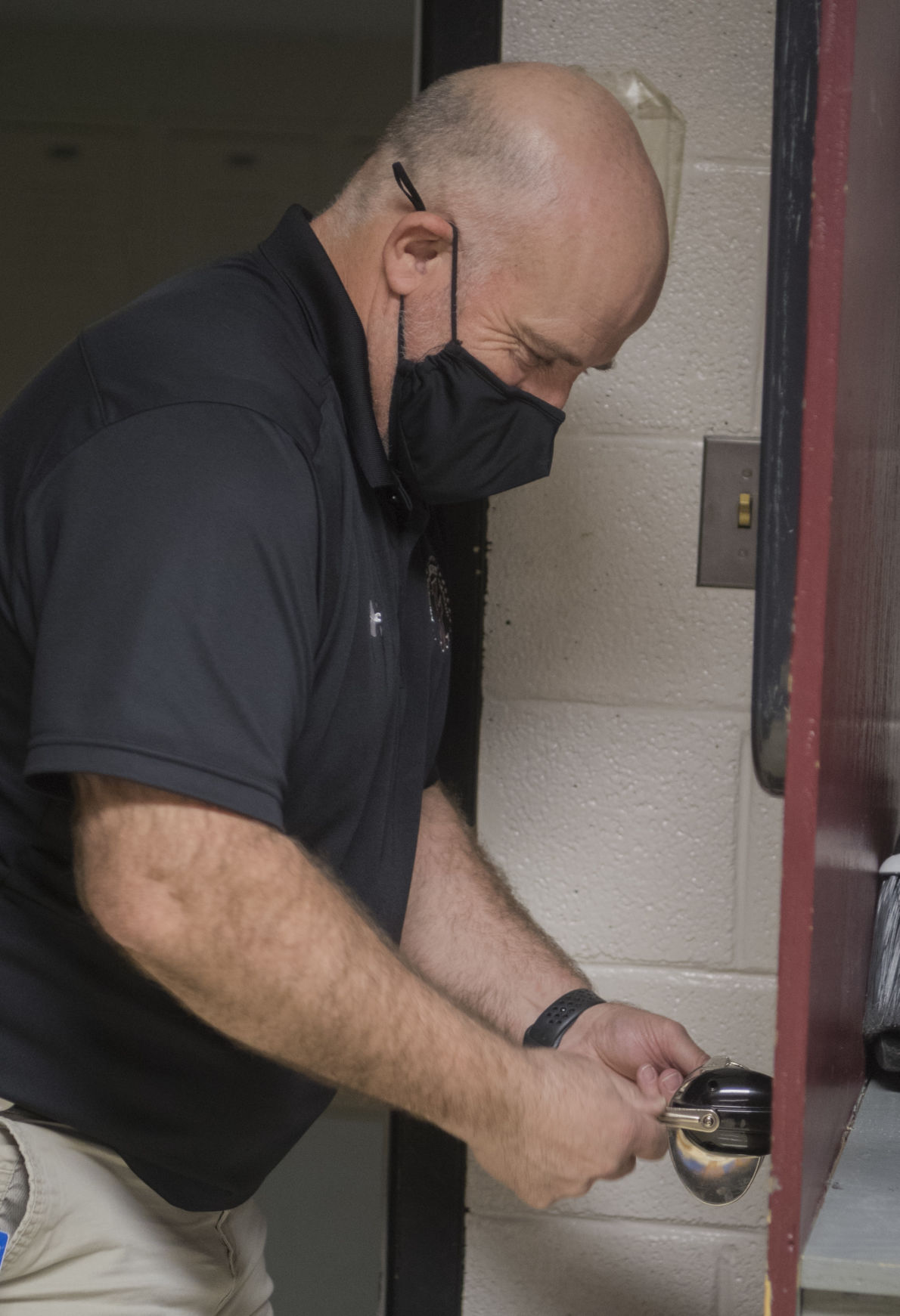 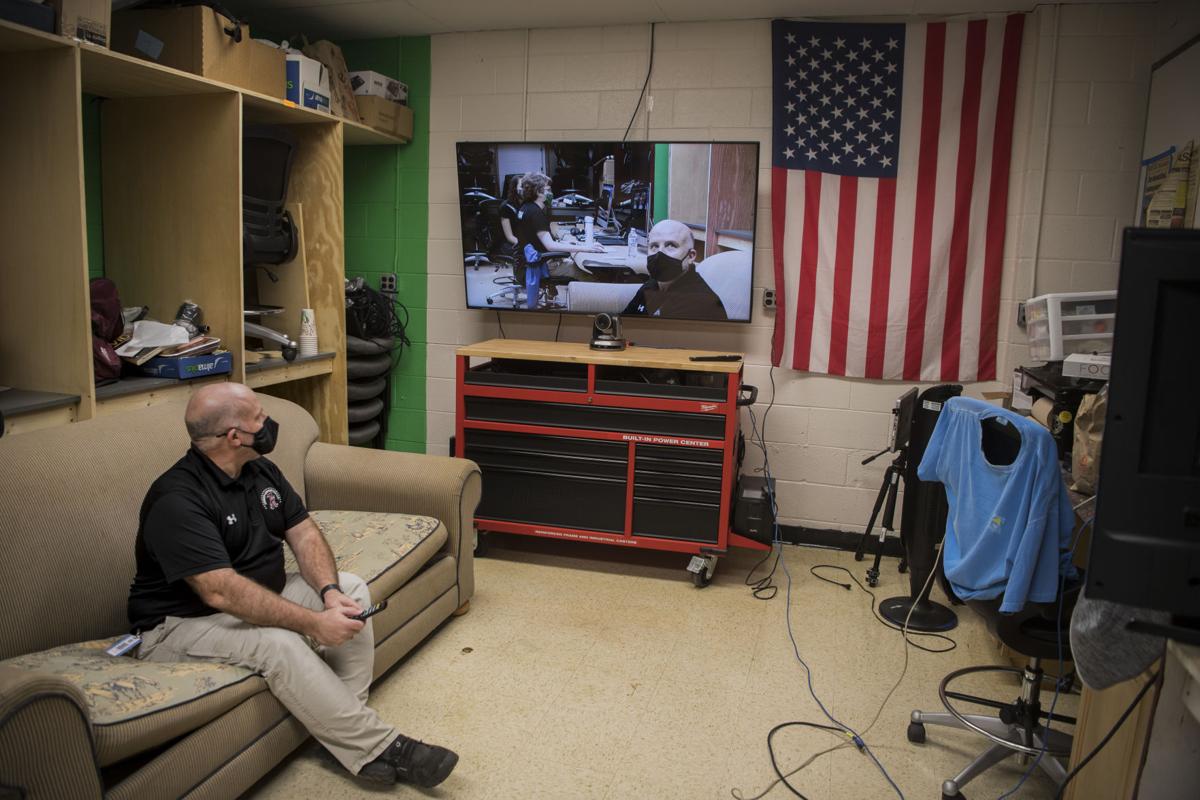 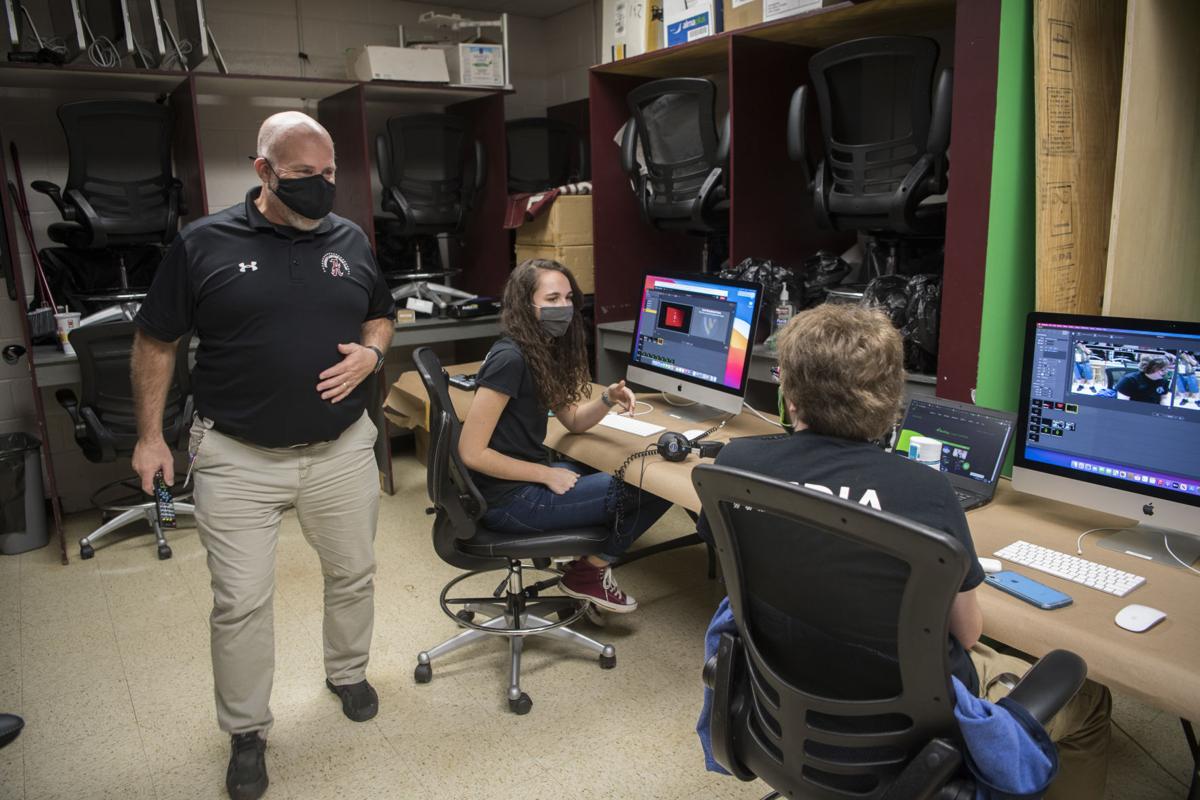 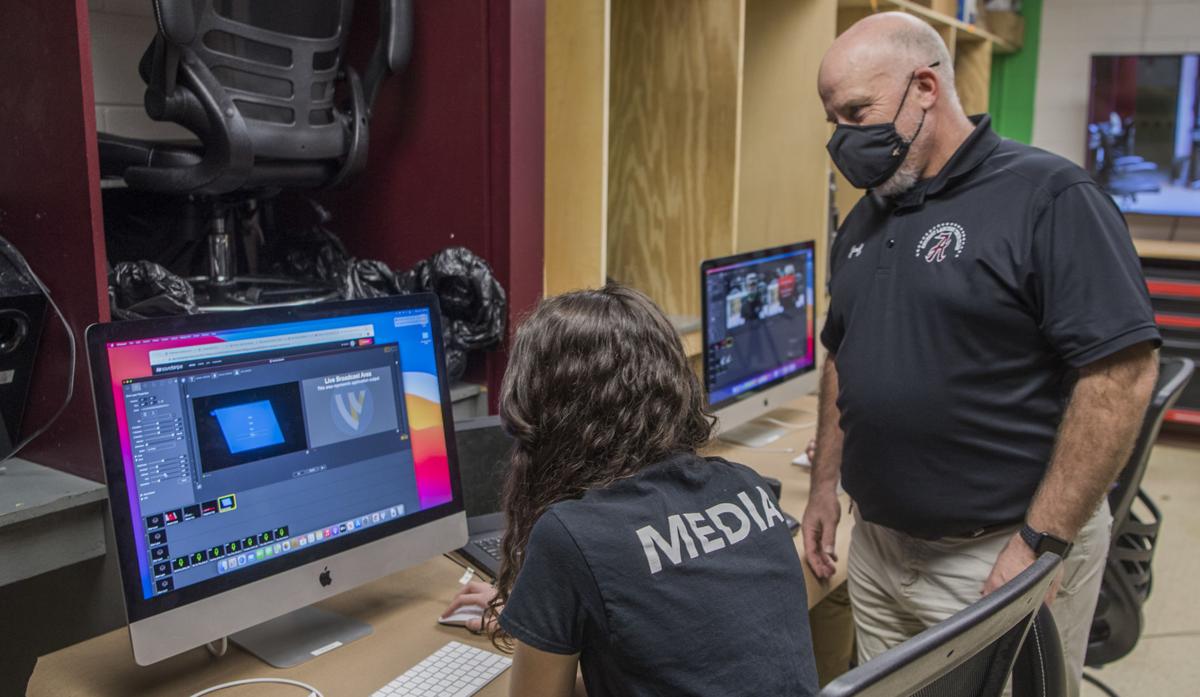 As rain relentlessly saturated Amherst on Dec. 4, the night of the town’s much-awaited reverse Christmas parade, members of the Amherst Lancer Tech Club were feeling the pressure to broadcast the event.

Keeping equipment dry in the downpour, getting stuck in traffic and losing power at one point were obstacles the team had to overcome in streaming the event online via video, said Mike Cargill, who heads the club and serves as Amherst County Public Schools’ digital media communications manager.

“I got as wet as anybody out there. We were able to pull off a miracle, in a sense, because there were so many factors,” Cargill said of Amherst County High School students streaming the event in such conditions. “They all said this is the best day they had all year. The memory we created is even though we don’t have all the answers, we have to give it our best shot. We had to problem-solve how to fix this so the show could go on. I thoroughly enjoyed pulling it off with so many challenges.”

Now a new challenge awaits for Cargill and the club: standing in the gap for spectators in streaming sports events for near-empty gyms and facilities during a sports season unlike any ever experienced in the Amherst school division’s history. With a gauntlet of restrictions from the COVID-19 pandemic, the Seminole District has decided no fans will be let into sporting events because of limits on crowd sizes.

While the Lancer Tech Club has recorded and broadcasted sporting events for years, its role is needed now more than ever as families and loved ones are not able to sit in on games this winter. Cargill and students in the club have prepared for the planned Jan. 7 kickoff of sports at the high school, which marks the first athletic contests since the pandemic was declared in March.

The club plans to use three cameras in the ACHS gym, including one on the wall that moves back and forth to capture the action and two stationary cameras, all of which transmit back to its studio. Cargill and students will add content to the production in streaming the games on its online and social media platforms.

“We’re going to do as many games as we can,” Cargill said. “We don’t know what the end product is going to look like.”

In more than 17 years with Amherst schools division, Cargill has helped the high school and two middle schools’ students learn multimedia in a real-word setting through hands-on experience. The club, which unofficially started 16 years ago, began streaming football games in 2011.

Cargill estimates the club has filmed more than 3,500 events, including the aftermath of the tornado that ripped through the Elon community in spring 2018, and has live streamed more than 2,500 events.

He estimates the group has produced more than 500 videos in the past 16 years and more than 200 students have participated. The precursor to the current club was AMS Live, which started while he previously worked at Amherst Middle School.

Under his leadership, students filmed the morning announcements on a VHS tape that was broadcasted across the schools. He started working at the high school in August 2015.

A native of Oregon and the son of a rancher, Cargill grew up on a farm and attended a publicly funded school with a dorm in which he lived. His roommate lived 153 miles from the school and he and classmates had chores.

“We grew up around athletics and that’s where my passion for athletics comes from,” Cargill said. “I’ve been involved in athletics my whole life and I think sports is so unique because you learn so much by participating. You learn about teamwork, work ethic and overcoming challenges.”

His grandparents, admirers of the late Jerry Falwell, wanted one of their grandchildren to go to the Lynchburg college he founded, Cargill said. In 1982 he fulfilled their wish by coming to the East Coast for the first time to attend Liberty Baptist College, which by the time he graduated five years later had become known as Liberty University.

Cargill’s degree was in physical education and he had a minor in athletic training. He became a certified athletic trainer at Liberty where he worked 10 years. He also was at Jefferson Forest High School a few years before coming to Amherst in 2003.

He describes the Lancer Tech Club as a hands-on laboratory where students sharpen their skills, dive into areas that interest them and develop time management expertise through projects.

“This is a job site. You’re going to learn the basics you need to know to operate a camera and the different technologies,” Cargill said, adding the hands-on component is crucial. “This is where they make a mistake and learn from it. The key is to learn from it.”

The club has five focus areas: a streamers group, capturing footage and images through drones, a STEM competition team, a music group and a sportscaster group. Students also have been instrumental in streaming Amherst County School Board meetings this year with technology that allows them to operate cameras remotely and podcasts hosted by Superintendent Rob Arnold.

“The key is if you can make it fun and educational, kids want to be involved with that,” Cargill said.

The club currently has its lowest number of students Cargill has seen because of the pandemic’s effect on enrollment, with many students staying at home, he said. In 2016 the group streamed 94% of athletic games because of high student participation, he said, noting it varies over years.

“We have to figure out a way to provide streaming with fewer students,” he added.

Cargill said during the most recent Christmas parade the students weren’t stationed and had to stream while on the go, a first for the group.

“They’re learning to be problem-solvers and move forward with things,” he said.

Arnold said Cargill’s extensive experience and work with the established club is vital to the division’s streaming efforts.

“It certainly has become a greater need right now,” Arnold said of the online outreach. “Mr. Cargill has been way ahead of the curve on this.”

As school officials emphasize the public’s patience and understanding with COVID-19 measures restricting access to sporting events, Arnold said the division is fortunate to have Cargill and the club.

“We’re trying to do everything we can to give people opportunities,” Arnold said of streaming sports.

Cargill said he enjoys building relationships with students and teaching responsibility and commitment as they tackle productions.

“Why do people take pictures? Because they want to remember,” Cargill said of the club’s role. “We are archiving and documenting history. Once it’s gone, it’s gone.”

The former home of Sid's Drive In — a familiar sight along the U.S. 29 Business corridor in Madison Heights known for its hamburgers, hot dogs…

UPDATE: Just more than one-third of all Amherst County's coronavirus-related deaths so far were reported in the span of the past nine. The cou…

Despite the COVID-19 pandemic, Amherst County’s housing saw an increase in zoning permits, single-family homes and accessory structures in 2020.

Amherst County’s budget planned for fiscal year 2022 currently is projected at $45.7 million and includes a 1.5% cost of living pay raise for …

Amherst Circuit Court resuming jury trials during the COVID-19 pandemic will have to wait at least until April 15.

Mike Cargill, advisor of the Amherst Lancers Tech Club, poses with one of the main high tech cameras that will be used to stream athletic events .On the screen are two of his media students, Peter Garrison, left, and Grace Stinson.

Mike Cargill, digital media communications manager for Amherst County Public Schools, holds one of the remote cameras (left) and a lens. These will be attached to the basketball goals when the season starts, which helps in streaming games.

Mike Cargill, pictured Jan. 4 at Amherst County High School's gym, holds one of many high tech cameras the Amherst Lancer Tech Club will use to stream games this season.