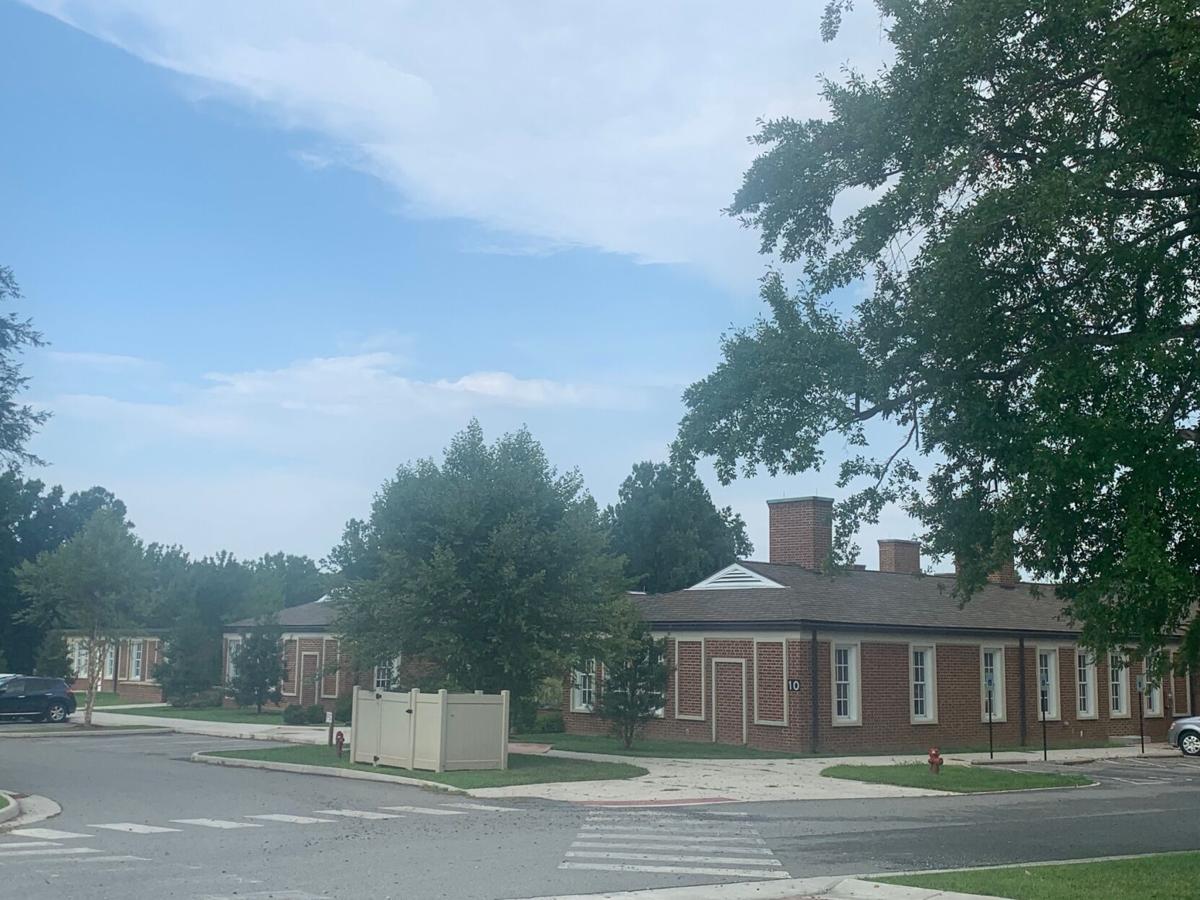 A view of Building 10 at the Central Virginia Training Center property on Colony Road in Madison Heights. 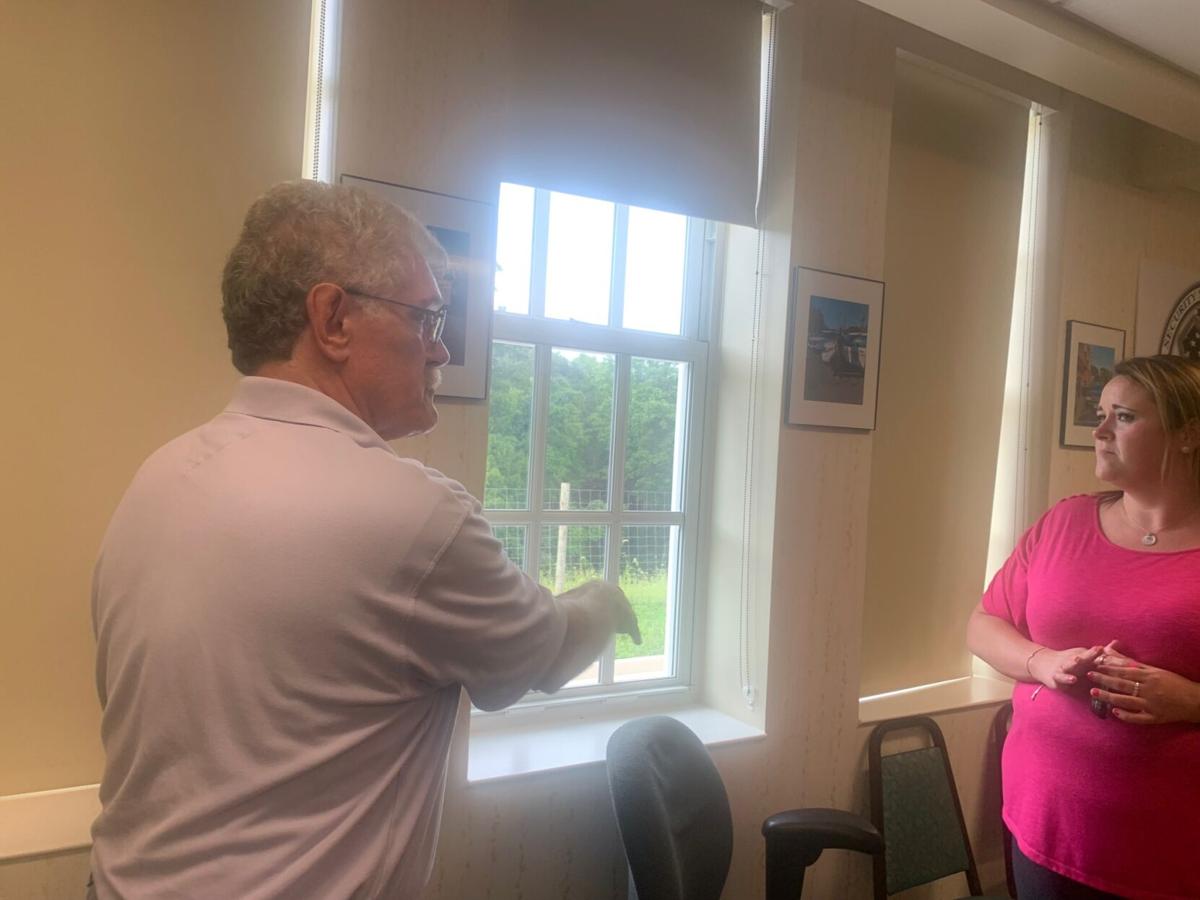 Bob Hopkins, executive director of the Amherst County Service Authority, speaks with Jennifer Moore, the ACSA board’s chair, during an Aug. 25 tour of the Central Virginia Training Center’s Building 10. The space pictured could be used for a drive-through window, Hopkins said.

Amherst County Service Authority members in late August toured Building 10 of the Central Virginia Training Center in Madison Heights, an option the authority is exploring as a possible new headquarters.

CVTC, a state-owned campus that closed last year and is targeted for future redevelopment, has five buildings known as the Lower Rapidan, including Building 10. The state has invested more than $35 million into those buildings and the authority has discussed the possibility of moving its main office from Phelps Road to a leased wing of Building 10.

During the recent tour, one challenge noted is the need for fiber internet access, which officials said can be tackled with digging of new water lines planned for the CVTC property as part of improvements to existing infrastructure for utilities. State representatives said Building 10 is suitable for repurposing and adaptable to office uses.

Bob Hopkins, the authority’s executive director, said the CVTC space is a good spot for public meetings and provides much more space for customers and employees.

“This would be a lot more space than what we have for our clerks now,” Hopkins said of an area that could serve as the main lobby entrance.

The building also has an emergency generator, which the ACSA’s current office lacks, Hopkins said.

Hopkins said the authority locating there could serve as a “catalyst” in triggering redevelopment, as the campus has more than 300 acres and roughly 90 other buildings. He added the Lower Rapidan could also lend itself well to medical and dental office space and also suggested a county annex building with departments facing space issues in the county’s administration building in Amherst relocating to the southern end of the county where much of their work is focused.

Hopkins said the current redevelopment preliminary plans calls for a new, major entrance off Route 210, which could be sited to go right past the Lower Rapidan, making those buildings easily accessible off a major highway for ACSA customers. Building 10 could also provide a drive-through window, which he said would be popular with customers.

The current service authority office on Phelps Road next a former school that recently opened as The Westie, 41 renovated apartments, has been the ACSA’s headquarters since 1955. It was enlarged in 1963, 1968 and 1980 and has issues with lack of interior space to add staff and is considering out-of-date, according to county documents.

“…Building 10 looks to be in very good condition; it’s clean, presentable, accessible, easy to find your way in, in a favorable location … and would impress ACSA customers and [Amherst] County citizens,” Hopkins said in a later email to ACSA board members. “Building 10 would address most, if not all, of the many deficiencies of the current Water Office, including poor and unsafe work environment for staff and public; poor and unsafe customer, pedestrian, and vehicle access; inadequate parking; no backup power supply; disaster recovery if the Water Office cannot be used;  We have long needed to improve the work environment for ACSA staff and the Water Office appearance to the public and this site would do that.”

Hopkins said he has looked for a suitable site for relocation for four years.

“The pickings have been and remain slim, unless we are ready to spend a tremendous amount of money, and the [ACSA] Board has shown no interest in what has been presented to date,” Hopkins said in the email to board members.

Hopkins said according to discussions with state officials, at least one entity is seriously looking at taking over the Lower Rapidan area. A lease with the state could be transferred to a new owning or leasing entity, he added.

ACSA only needs the north wing of Building 10, which is about a mile from the current office and has a circular drive that would accommodate a drive-through, according to Hopkins.

“I really want address this as soon as possible and this is a very viable opportunity,” Hopkins said in the email.

Amherst County this week crossed the 4,000 mark for positive cases of the coronavirus since the pandemic began in March 2020, according to the…

Amherst County Public Schools saw a large regression in math and science scores during the 2020-21 school year, a reflection of the highly cha…

A view of Building 10 at the Central Virginia Training Center property on Colony Road in Madison Heights.

Bob Hopkins, executive director of the Amherst County Service Authority, speaks with Jennifer Moore, the ACSA board’s chair, during an Aug. 25 tour of the Central Virginia Training Center’s Building 10. The space pictured could be used for a drive-through window, Hopkins said.