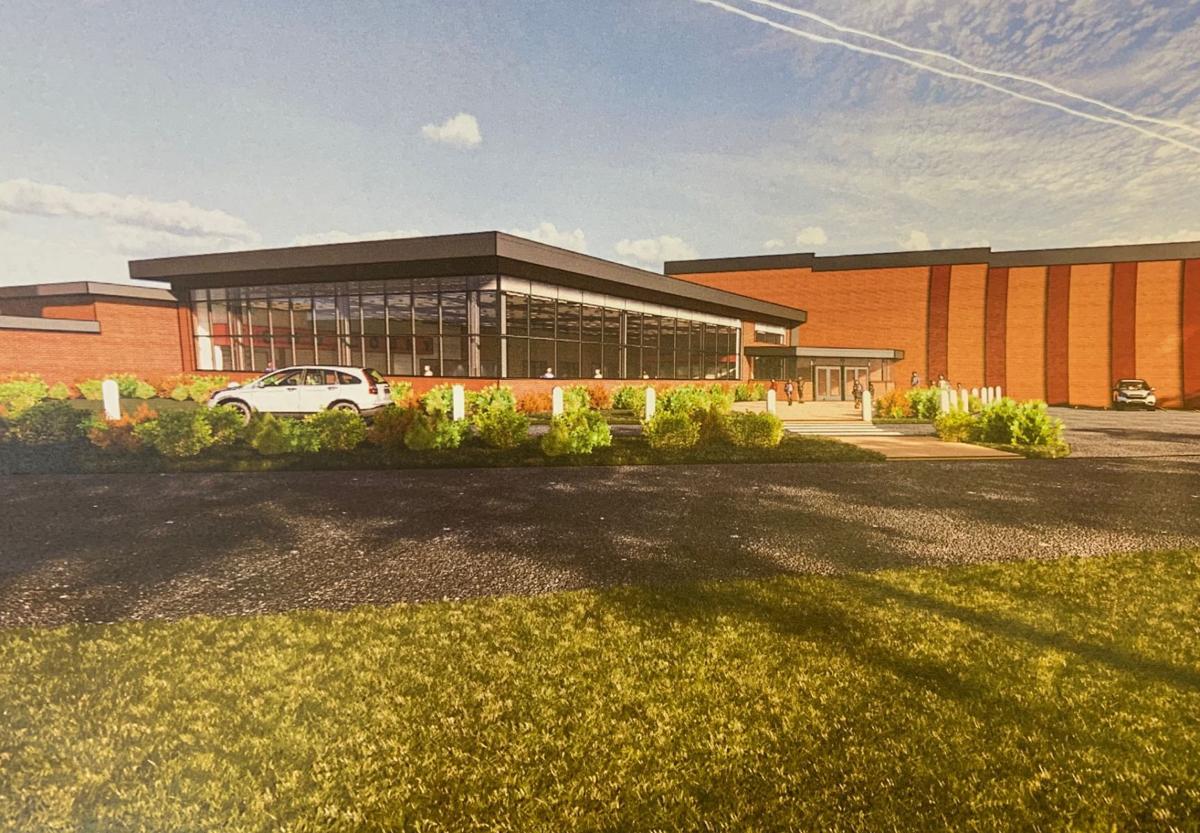 A rendering of how Amherst County High School's back area may look under a proposed option that includes a new auditorium, lobby and revamped dining area.

A new capital improvement plan targeting potential projects at all Amherst County Public Schools over the next 15 years received approval from the county’s school board during a Nov. 12 meeting.

The long-range plan will guide the Amherst County School Board’s decisions in upcoming years and includes a slate of design estimates from the Charlottesville firm Crabtree Rohrbaugh & Associates.

Two projects that are scheduled to move forward in the 2021-22 year are regrading the slope and repairing the damaged foundation, floor slab and masonry wall of Madison Height Elementary School and Amherst Middle School. The combined work is estimated to cost $554,000 to $664,000, according to the plan.

The two projects will soon go to a bid process and are the most pressing needs in the plan, Superintendent Rob Arnold said.

“Our biggest concern right now is getting those two projects underway,” Arnold said.

He said the new plan will at some point go before the Amherst County Board of Supervisors as projects are pursued.

Several projects tentatively slated for the 2022-23 school year or later are at Amherst County High School and include a new 1,600-seat auditorium and dining area addition and renovation, which together carry a price tag the firm estimates from $6.8 million to $8.1 million.

School officials have regularly voiced support for a new auditorium, a project they have described as much needed, long overdue and a feature that will benefit the Amherst community.

Other improvements targeted at the high school in upcoming years include replacing windows and exterior doors, Americans with Disabilities Act upgrades at Lancer Stadium and an athletic fieldhouse adjacent to the baseball field.

“This is a working document and may be amended by the [school board] at any time,” Assistant Superintendent William Wells said.

Vice Chair Abby Thompson said she likes the auditorium and dining area addition at the high school but she supports moving the time frame beyond the 2022-23 year to allow more time for review and consideration of the school’s overall needs, including career and technical education.

“If we’re going to do it we may as well do it right,” Thompson said of a potential addition to the high school.

In addition to the schools, the plan includes a roof replacement and addition to the division’s bus garage, a line item estimated to cost $805,000 to $966,000 and slated for the 2029-30 school year, though Wells recently has said it may be recommended for construction sooner.

The board’s approval did not include a potential addition and alterations to Elon Elementary School, which has seen growth in recent years, a project estimated at $4.2 million.

Thompson suggested a committee review Elon’s needs and growth and look at options, including potential redistricting of students.

Board member John Grieser said he feels adding an Elon Elementary expansion project on the list is premature and he had sticker shock with the cost.

“I think we owe it to the taxpayers of the county before something like that is put on there,” Grieser said.

Board member Christopher Terry noted the Elon school’s recent growth but the price tag “is a large pill to swallow.” He later added addressing Elon’s needs is near and dear to many and the board has to ensure whatever route is taken fits in the right place.

“So let’s make sure we don’t jump the gun too much,” Terry said.

After months of delay caused by the COVID-19 pandemic, the Elon Ruritan Club welcomed the community in celebrating its new building with an op…

Amherst County’s push for broadband upgrades to reach all areas of the county with high-speed internet is moving forward despite a recent setback.

In challenging year, Amherst residents express thanks heading into holiday

In a year of many challenges and hardships from the COVID-19 pandemic that upended aspects of everyday life, Amherst County residents are find…

A rendering of how Amherst County High School's back area may look under a proposed option that includes a new auditorium, lobby and revamped dining area.