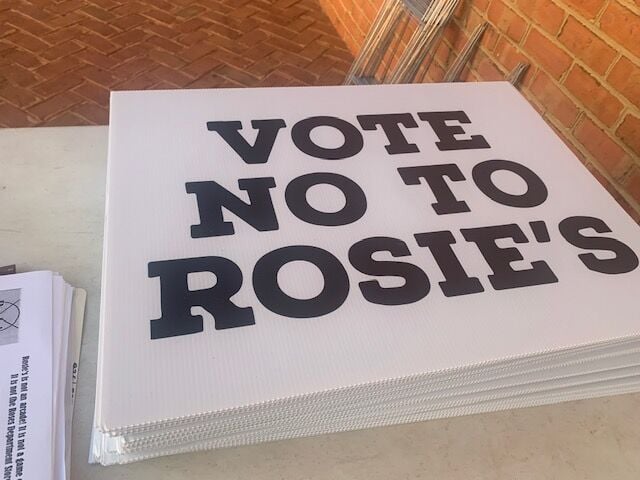 A sign opposing Rosie’s Gaming Emporium was among many at a Sept. 30 rally in Madison Heights. 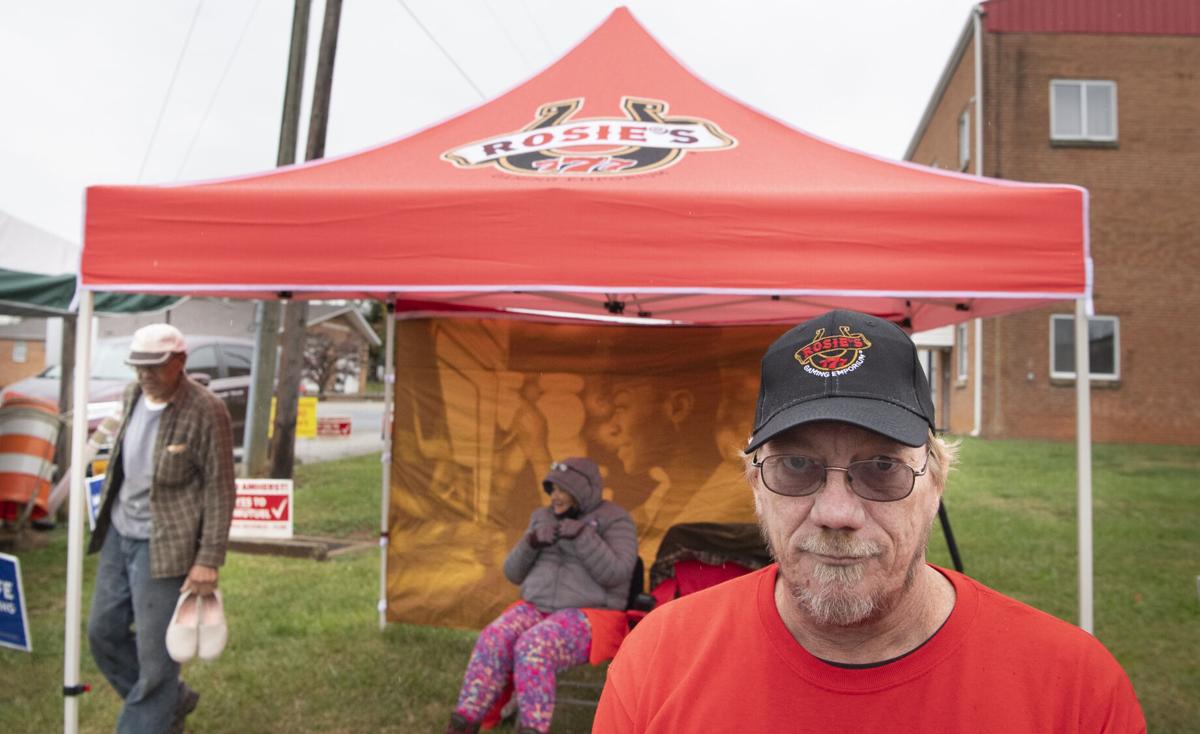 A group of Amherst County residents that formally opposed Rosie’s Gaming Emporium establishing a facility in Madison Heights was fined $100 for failing to meet a state deadline related to paperwork, according to an organizer.

A referendum on pari-mutuel wagering, which needed to pass to allow Rosie’s to operate in Amherst County, was rejected during the Nov. 2 election. The no votes were 7,293, or 54%, against 6,189 voting yes, or roughly 46%, according to the Virginia Department of Elections. The defeat at the ballot box means the measure cannot come up again for at least three years, according to county officials.

Tobey Thurston, an organizer of Amherst Citizens Against Rosie’s, said the group missed a filing deadline in becoming a political action committee. It raised just more than $8,000 largely through a GoFundMe page for which Thurston serves as the administrator, she said.

Thurston said during the public comments portion of the Amherst County Board of Supervisors’ Nov. 16 meeting she immediately contacted the Virginia Department of Elections’ campaign finance department after finding out the PAC needed to be formed.

She said she previously consulted with an attorney in setting up the group’s Facebook page, GoFundMe account and helping organize advertising and was made aware of the step to formally file as a PAC.

“Since I have never been involved in politics, I had no idea that more would need to be done,” Thurston said at the supervisors meeting. “Is this an excuse? No. But it’s the truth.”

The group will meet other deadlines required by the Virginia Department of Elections and expects no further fines, Thurston said. She added it has nothing to hide, is committed to transparency and immediately worked to report its activities when becoming aware of the need to.

In addressing anonymous donations, she said the GoFundMe site allows for donors to not be identified on the webpage but she has kept track of all of the financial giving.

“As the administrator of the fundraiser, I’m able to see the name and amount for every donation and they have all been reported to [the Virginia Department of Elections’ campaign finance department],” Thurston said.

According to Rosie’s company officials, the Amherst referendum is the first to not pass for Colonial Downs Group, the owner and operator of the business. Locations have been established in Vinton, Henry County, Richmond, Hampton, New Kent County and Dumfries and the latest other referendum for a Rosie’s in Emporia City passed Nov. 2 with more than 60% of the vote.

Thurston and others opposing Rosie’s coming to Amherst have said the adult facility is not in line with the county’s character and gambling there would bring detrimental effects to the community, among other concerns.

Supporters have said it would strengthen the tax bases, bring more needed revenue to the county, establish dozens of new jobs and revitalize the Seminole Plaza shopping center in Madison Heights where it proposed to locate in.

The Amherst County Economic Development Authority, a strong Rosie’s supporter, has said it is confident more businesses would have located in the county had it passed.

If the referendum had been successful, Rosie’s would have taken ownership of the Seminole Plaza and construct a new standalone building next to Big Lots, company representatives have said. The majority of the board of supervisors in September voted to support Rosie’s coming to Amherst, citing economic benefits. Chair Jennifer Moore was absent during the vote and Vice Chair David Pugh abstained.

The county in a news release after the board’s Sept. 7 vote said supervisors are convinced they are “not introducing any new, untoward influences into county culture” and are committed to reducing the tax burden on real estate owners by promoting more business activity.

Vance Wilkins, chair of the Amherst County Republican Committee and a former Virginia Speaker of the House, said when reached by phone after the election he knew of many GOP voters in the county who had differing views on Rosie’s setting up in Madison Heights.

“We did not take a stand on it as a party one way or the other,” Wilkins said.

Supervisors did not comment during the Nov. 16 meeting on the referendum’s outcome in their first meeting since the election. Thurston asked the board to consider doing what it can to resolve division, especially on social media, throughout the community.

“We all agree that Amherst needs more things to keep money in our county and that we need more tax revenue from businesses,” Thurston said. “Our citizens are not anti-growth. They are anti-pari-mutuel and all forms of gambling. The citizens have voted and the answer was a clear answer.”

She urged supervisors to unite the community and work together.

“Amherst can survive without Rosie’s,” Thurston said. “Our citizens are looking to you for that reassurance. You have the ability to douse the fire or add fuel to the flame and my prayer is you will lead us to unity.”

Rocky Hill Road (Route 1015) in Madison Heights will be closed to through traffic between Stumps Hill Road and Lynches Ferry Road for repairs,…

Police are investigating a hit-and-run crash in Amherst County that injured a Madison Heights woman Nov. 14.

Nearly three years after Amherst Town Council approved a 20-year lease with the Amherst Mountain Biking Club for use of land in business park,…

A road extension is targeted to connect Lynchburg Road to property owned by Amherst County where the county’s visitor center is located, a pro…

A sign opposing Rosie’s Gaming Emporium was among many at a Sept. 30 rally in Madison Heights.