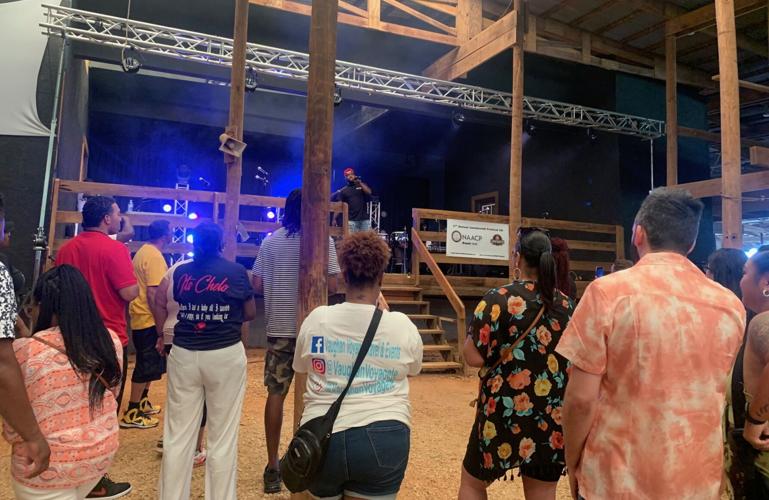 People enjoy music during the Juneteenth Festival in Amherst on Saturday, June 18.

A crowd of hundreds gathers for the first Juneteenth Festival at Lazy Days Winery in Amherst County on Saturday, June 18. 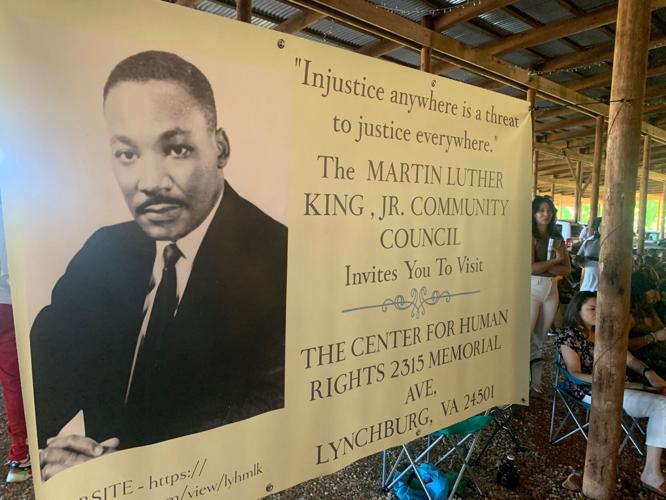 A banner displaying Dr. Martin Luther King Jr. was among scenes at the Juneteenth Festival in Amherst. 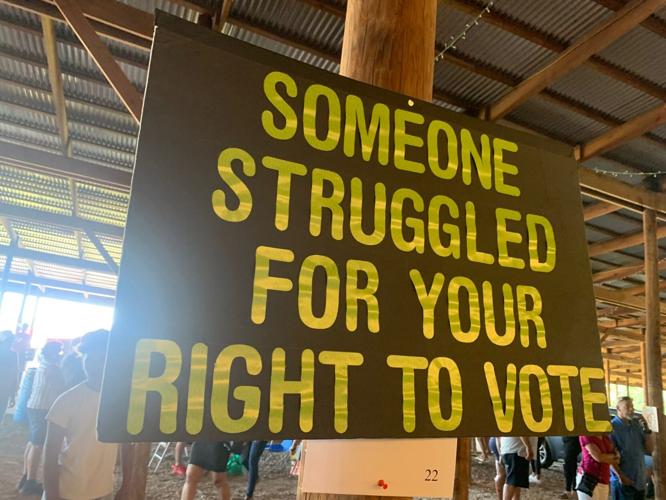 A sign at the Juneteenth Festival in Amherst emphasize the importance of voting. 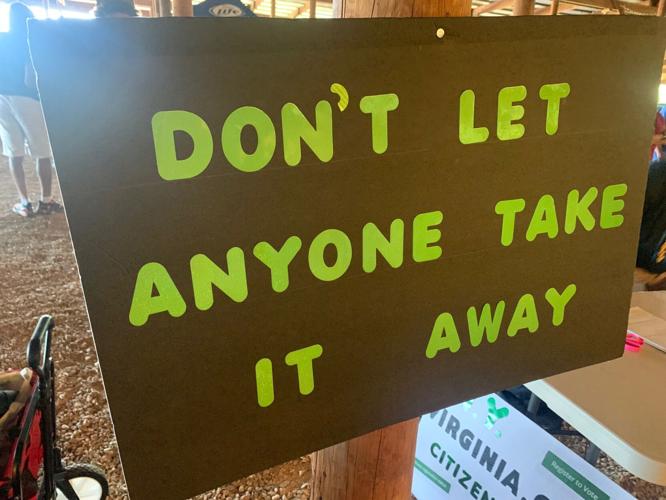 Signs at the Juneteenth Festival in Amherst emphasize the importance of voting.

Hundreds gathered at Lazy Days Winery on June 18 for the inaugural Juneteenth Festival in Amherst County, soaking in music, food and community spirit.

The event organized by the Amherst branch of the NAACP was among numerous ones in the Lynchburg area commemorating the end of slavery for African Americans when the last enslaved were liberated by the Union Army on June 19, 1865.

JeShaun Clark, co-chair and founder of the Amherst Juneteenth Festival, said the event is planned to become an annual gathering in Amherst to mark the Juneteenth holiday.

“We want to cultivate a community of togetherness,” Clark said. “We want to liberate people by giving them this opportunity to celebrate Black culture and just have a good time.”

Clark said he was impressed by the large turnout, especially with many affected by power outages from a storm the previous day.

“It definitely exceeded my expectations,” he added.

The power outage also affected the event, as musicians performed by using a generator, according to event organizers.

Gloria Witt, president of the Amherst NAACP, said the gathering felt like a big family reunion.

“For me about this festival is really about celebrating freedom and without democracy there is no freedom,” said Witt. “We want to cultivate Black business entrepreneurship, support one another. We want to liberate, stand up, have a voice.”

Witt emphasized the importance of voting and involvement in the upcoming Nov. 8 elections with all seats in the U.S. House of Representatives on the ballot as well as nearly three dozen U.S. Senate seats.

“We have got to show up at the midterm elections,” said Witt. “These are serious times and we have to be mindful democracy is on the line... Every advancement we’ve had as a Black people has come through legislation. That’s democracy, that’s voting.”

Throneburg told the crowd he is running for a future for his children and their children and urged them to vote Nov. 8.

“We are celebrating the day when people in this country became free, but that day did not make our country fair,” Throneburg said to the New Era-Progress. “So there’s a lot of work to do to make this country fair so I want to be among people and make sure they know I’m going to fight for that fairness for their future.”

He said he is running to make sure those living in rural communities, including those ignored and marginalized, have proper access and opportunities in areas of broadband, health care and education.

“And honestly, climate change is a big one for me,” said Throneburg. “We have farmers all over this district and what we know is every year their livelihood has been combusting and so we have to figure out ways to solve that.”

On the high prices of gas in recent months, Throneburg said the country is addicted to oil and needs alternative energy resources.

“When the price of oil goes up we have no power,” Throneburg said. “We have to diversity our energy portfolio so we don’t have to be dependent on that. And right now we’re sitting on high prices, we have no power, no freedom to do anything about it.”

Altra Witt Reid, Virginia Juneteenth Festival co-chair, said the event was important for the Black community in Amherst County and the entire county.

“It’s just important to have something like this in the community so we can empower African-American community to come together to cultivate our own community, our businesses, our education, our initiatives and push forward the message that all people matter, and Black people are strong and excellent and intelligent and we are here and welcome,” said Reid. “So I feel like bringing this community together gives us a place in Amherst County, something we’ve never had before... something that pulls all the African Americans together in one spot to celebrate our culture and our heritage.”

Amherst County was hard hit with damage from storms the afternoon of June 17 that left thousands without power, according to the county’s chie…

About 180 acres of primarily wooded parcels is on its way to becoming the Madison Heights Town Centre, a planned mixed use community of apartm…

The Amherst County Planning Commission recently gave its backing to the latest update of the county’s comprehensive plan, a guide for growth a…

Three decades after first stepping into an Amherst County classroom to teach, William Wells signed the contract on June 16 to become the count…

People enjoy music during the Juneteenth Festival in Amherst on Saturday, June 18.

A crowd of hundreds gathers for the first Juneteenth Festival at Lazy Days Winery in Amherst County on Saturday, June 18.

A banner displaying Dr. Martin Luther King Jr. was among scenes at the Juneteenth Festival in Amherst.

A sign at the Juneteenth Festival in Amherst emphasize the importance of voting.

Signs at the Juneteenth Festival in Amherst emphasize the importance of voting.