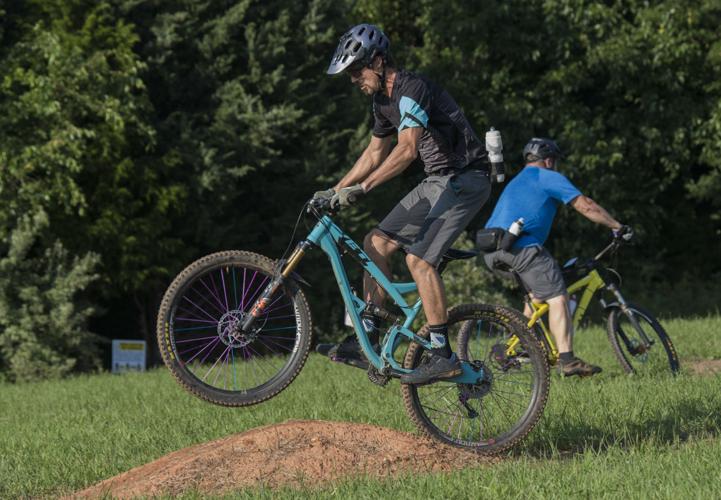 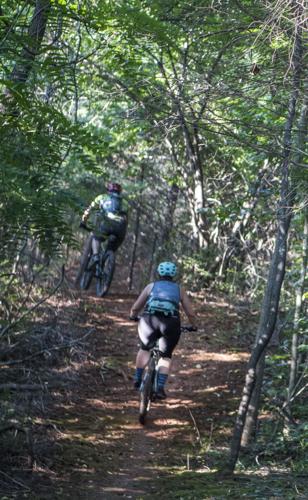 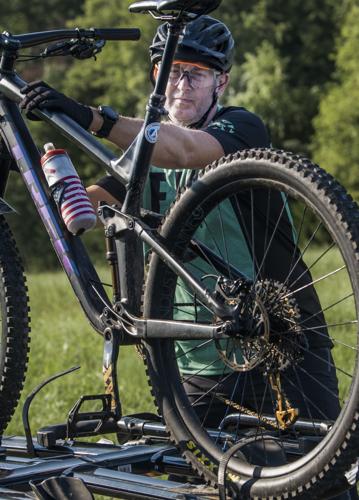 Tim Ware unloads his trail bike while getting set to ride with the Amherst Mountain Biking Club riders on Aug. 10, 2020. 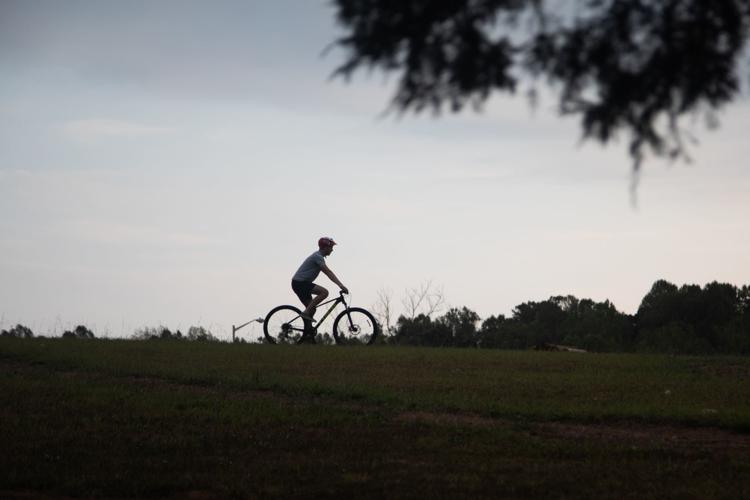 Nearly three years after Amherst Town Council approved a 20-year lease with the Amherst Mountain Biking Club for use of land in business park, the club gave town officials a recent update on the progress in building trails and establishing a more robust cycling community.

The club uses trails within the L. Barnes Brockman, Sr. Business and Industrial Park on U.S. 60 East in Amherst. The trail area consists of more than 40 acres close to Rutledge Creek that the town has said are not used for any other purpose.

Council approved the lease agreement with the club in March 2019 for $1 per year.

“We continue to grow with our club,” Massie said. “We’re pretty excited about where we landed and what we’ve accomplished. It’s been fun so far.”

Massie said the group has a community ride scheduled for Nov. 21 at the Blue Ridge Railway Trail in Piney River close to Virginia 151 at the Nelson County border. The club also rides regularly at Sweet Briar College, he said.

“We try to keep our Mountain Biking Monday rides community friendly but understanding there’s a lot skill level there,” Massie said. “We’re trying to keep everybody’s interest, so they’re not going to be the hardest ride in the world, but they’re going to challenge [riders]. That’s what mountain biking really is.”

The club also is hosting its annual spaghetti dinner with a silent auction to follow at the Amherst Fire Department on Second Street in Amherst, which will be held 6 to 8 p.m. Dec. 5. Tickets are $5 and are available at Warehouse Antiques on South Main Street.

“I encourage everyone to come out and support it in any way you can,” Tim Ware, the club’s director, said of the dinner fundraiser.

In addition to holding rides and racing events, the club in 2022 looks to expand the trail system in the Brockman park and other locations in the county, including Mill Creek Lake Park. The group also aims to find trail connections between Sweet Briar College and local breweries, including the recently established Camp Trapezium brewery and restaurant within a restored mill on Union Hill Road.

“It’s a stimulus of nothing else but energy and that’s what we are trying to bring,” Massie said.

The club also plans in 2022 to expand its skills track at the Brockman Park trailhead to include a dirt pump track, which Massie described as a small area for bikers to work on skills; installing a bike maintenance stand at the skills track and activating an online store to sell Amherst Mountain Biking Club merchandise.

Ware said the club’s efforts are aimed at bringing more visitors to Amherst for recreation, which helps the local economy as they frequent stores and restaurants.

Mayor Dwayne Tuggle thanked the club for its work that benefits Amherst and said he is excited by it.

Councilor Janice Wheaton complimented the trail network in the business park. She said she has walked it with her son, who was impressed with it like a kid on Christmas morning.

“He is thrilled to have this to ride on in his backyard,” Wheaton said of the town attraction.

Massie said the group welcomes council’s input with its plans and thanked officials for supporting its endeavors.

“We’re excited to continue our progress,” said Massie. “We’re going to keep riding. That’s what we do.”

Before the first piece of fried chicken was served at Amherst County Public Schools’ Community Connections Dinner of Jan. 19, laughter and con…

With an eye toward spurring major development in southern Madison Heights, the Amherst County Board of Supervisors is considering investing $2…

The Amherst County School Board recently received a report on an academic review and monitoring process underway at five county schools.

A Madison Heights property of more than 500 acres known as the Dillard tract recently received just more than $322,000 in state grant money fo…

In a Jan. 3 work session to prioritize capital improvements spending in the upcoming 2023-24 fiscal year, the Amherst County Board of Supervis…

Board OKs permits for two short-term rental sites, gets report on VDOT funding

The new policy includes an “opt in” measure that some school board members said is needed to give parents more say in what their children are learning.

Tim Ware unloads his trail bike while getting set to ride with the Amherst Mountain Biking Club riders on Aug. 10, 2020.