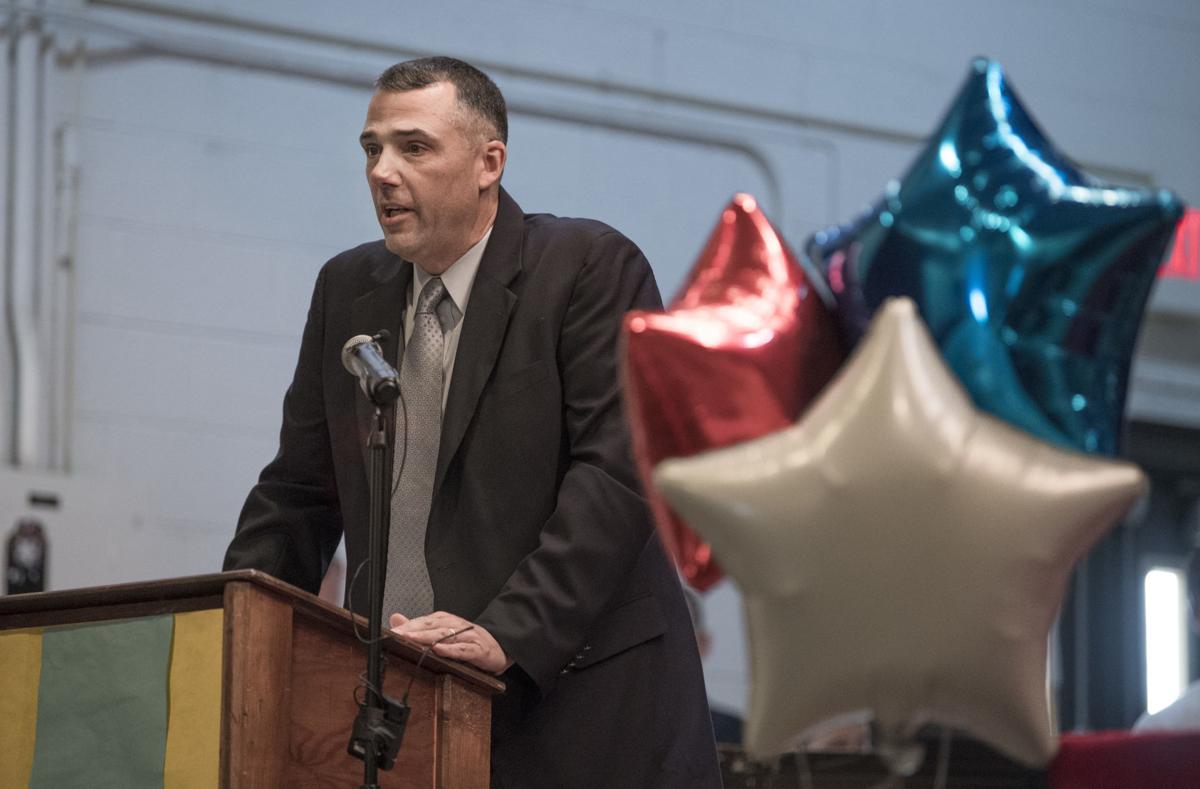 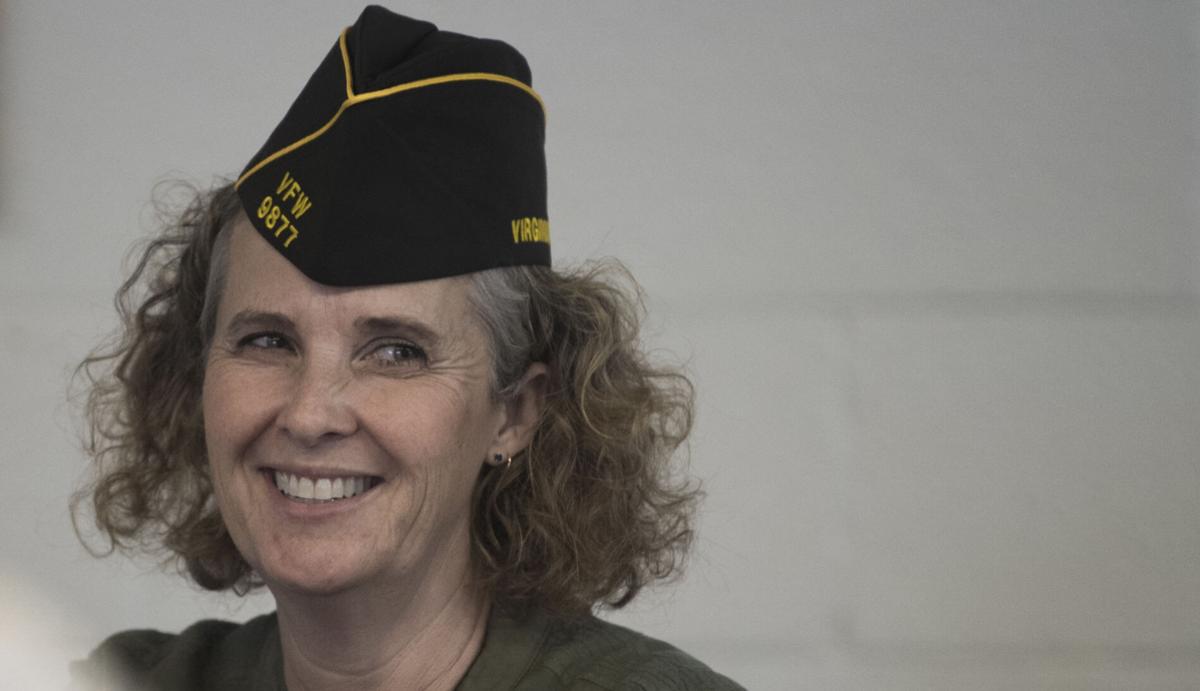 Stephanie Gerber, the first female member of the Amherst VFW Post 9877, smiles during a Sept. 15, 2020 meeting at the Amherst-Monroe Ruritan Club. 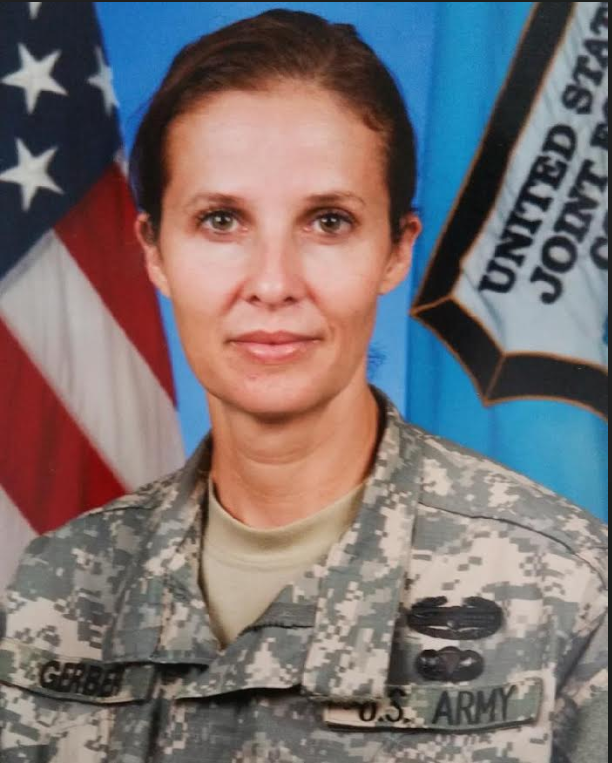 Stephanie Gerber, who has served four combat tours overseas and more than two decades in the Army, is pictured in uniform. 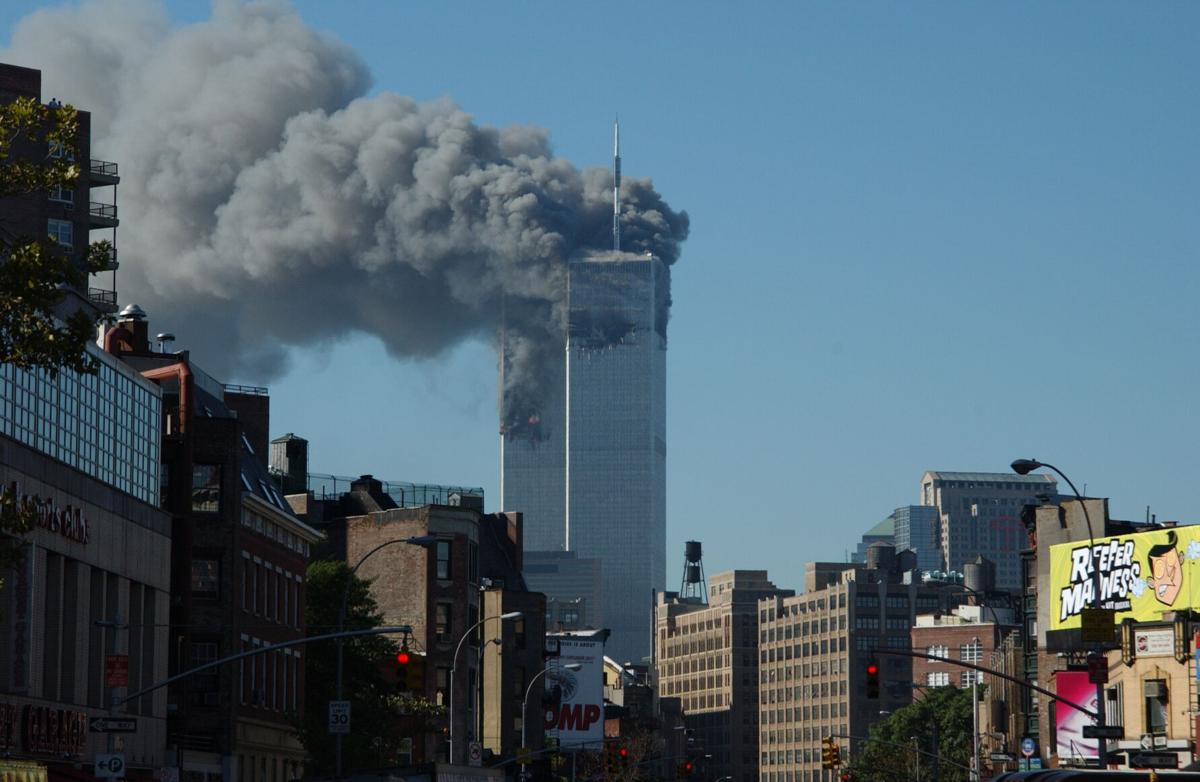 The twin towers of the World Trade Center burn after hijacked planes crashed into them on Sept. 11, 2001 in New York City.

On the morning of Sept. 11, 2001, William Wells was teaching world geography at Amherst County High School when he learned a plane had flown into one of the buildings of the World Trade Center.

Wells, who years later became the school’s principal and now serves as Amherst County Public Schools’ assistant superintendent, said he recalled thinking at first it might have been accident involving a small aircraft. The grim reality hit that America was under attack a short time later during Wells’ planning period as he and other teachers watched the news coverage as the second plane flew into the World Trade Center and the towers fell.

“It was an emotional toll,” Wells said.

He recalled the somber mood in the school for the remainder of the day as students and staff monitored coverage and discussed what may happen next. Wells said educators told students they didn’t have immediate answers but talked with students about concerns and fears while trying to carry on with school tasks as best they could.

“You could just see it was weighing on everybody. They could tell it was wearing on me,” Wells said. “The emotions were raw that day as it happened.”

Wells was in the U.S. Army Reserve and put on alert immediately, which he said hit home as a husband and father of three young children at the time. When he enlisted in 1988, the United States was close to the end of the Cold War and his basic training mindset was fighting Russians in Europe, not responding to a global terrorism threat.

In August 2005, Wells’ unit mobilized and was sent to Iraq, where he served a year on a military transition team with a mission to train the Iraqi Army to prepare it for combat missions on its own without U.S. support. He recalls about 10 in his group working with hundreds of Iraqis. He was stationed about 50 miles from the Syrian border, and his group convoyed regularly to Mosul.

“It was definitely a learning process,” Wells said of the tour. “It was a difficult year but I think I’m a better person for it.”

Wells said he knows many interpreters and feels for them as they were in danger after U.S. forces left Iraq and ISIS came through those villages — similar to the situation currently playing out in Afghanistan.

Amherst County resident Stephanie Gerber, an Army veteran, was working out in Midlothian watching television the morning of Sept. 11, 2001 and recalls the news coverage.

“Boy I tell you, I just cried,” said Gerber. “My only memory was thinking ‘How am I going to leave my children?’ I was in the Army Reserve for the time. That’s our mission, to always stay ready. My kids were so young.”

Gerber said she remembers seeing victims in the World Trade Center choosing to jump to their deaths than remain in the burning towers.

“It still gets me emotional...It was probably one of the profound things I ever saw: to make a decision how they would die,” said Gerber. “I thought it was so horrific.”

She recalls thinking she would be called up for duty immediately and being gone for years.

“It made me realize now was the time; this is what I had been training for,” Gerber said. “There was no decision to make. I would have to go and cease my life as it was and enter a new form of war.”

Nelson County High School Principal Chris Sumner was in his junior year of college at Virginia Commonwealth University during the Sept. 11, 2001 attacks and remembers sitting in a room with a small group when the planes hit the towers. The room didn’t have windows and he got a text message from Verizon on his phone advising the nation was under attack.

He recalls going to New York City that fall and seeing windows blown of out buildings, rubble and the absence of the twin towers. “It was scary and upsetting to see the aftermath,” Sumner said.

Those images stuck in his head, and he struggled going to the 9/11 Memorial & Museum just a few years ago, he said.

He visited New York the first time a few years prior to the attacks and the World Trade Center was the first of buildings he saw coming out of the subway.

“The events of that day are still very real and very upsetting,” Sumner said.

Amherst Commonwealth’s Attorney Lyle Carver was enrolled at the University of South Florida during the attacks and recalls lifting weights in a training class when “the world changed.” At first it didn’t seem real as he watched the news coverage, he said, and he knew in an instant it was the biggest worldwide event to happen in his lifetime up to that point. Years later, the day’s events was a major reason he joined the Virginia Army National Guard.

“Absolutely that was a factor in that decision,” Carver said of his later deployment overseas. “The slogan is never forget... the challenge is making sure our kids and generations to follow understand the magnitude of that moment.”

It’s important for students today who didn’t live through the Sept. 11 terrorist attacks to understand how the world changed that day and to remember the many sacrifices of the emergency responders who put their lives on the line that day, Wells said.

The thought of another similar attack is in the back of Wells’ mind, as it is in many Americans’ minds. He hopes it never happens, but he feels the country is better prepared to respond if it does.

“There are lots of things that can happen that can bring us together or tear us apart,” he said.

Amherst County this week crossed the 4,000 mark for positive cases of the coronavirus since the pandemic began in March 2020, according to the…

Amherst County Public Schools saw a large regression in math and science scores during the 2020-21 school year, a reflection of the highly cha…

Stephanie Gerber, the first female member of the Amherst VFW Post 9877, smiles during a Sept. 15, 2020 meeting at the Amherst-Monroe Ruritan Club.

Stephanie Gerber, who has served four combat tours overseas and more than two decades in the Army, is pictured in uniform.

The twin towers of the World Trade Center burn after hijacked planes crashed into them on Sept. 11, 2001 in New York City.