This rendering gives an idea of what a Rosie’s Gaming Emporium would look like from the air. 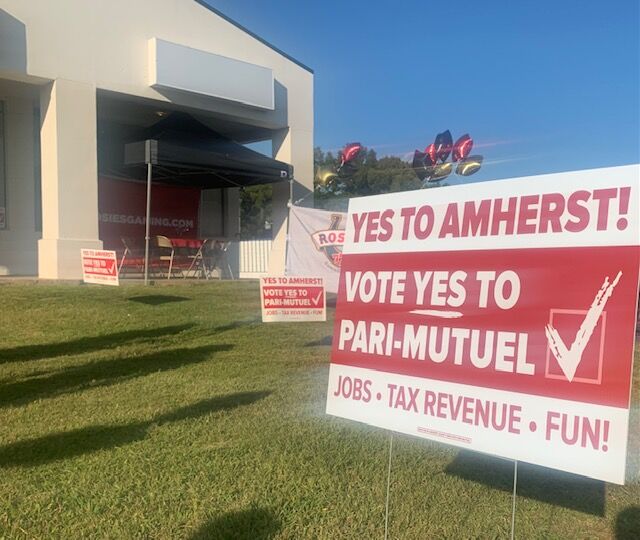 A sign in front of a new campaign office for Rosie's Gaming Emporium is located in the Seminole Plaza shopping center, where the business would locate if given the green light from a referendum on pari-mutuel wagering. 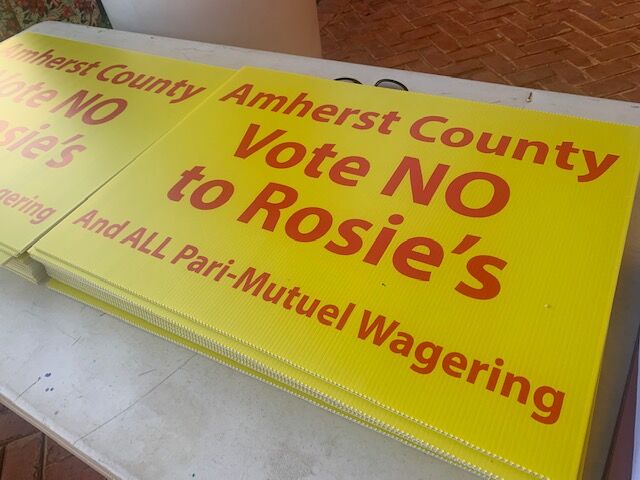 A sign opposing Rosie's Gaming Emporium and pari-mutuel wagering was on hand at a Sept. 30 meeting at Temple Baptist Church.

The intense debate over a Rosie’s Gaming Emporium locating in Amherst County, which has drawn both support and opposition, was on full display Sept. 30 in Madison Heights.

A Rosie’s campaign office in the Seminole Plaza shopping center, where Colonial Downs Group plans to build a new facility, opened that afternoon, drawing in a stream of residents. Meanwhile, a few miles north on U.S. 29 Business, a meeting rallying opposition to the business coming to Madison Heights was held at Temple Baptist Church that same evening.

The two contrasting scenes capture the choice Amherst County voters have in front of them this election: a yes or no vote on a referendum on the ballot for pari-mutuel wagering, a measure that must pass before Colonial Downs proceeds with constructing the estimated $40 million facility.

Les Bernal, executive director of Stop Predatory Gambling, a Washington, D.C.-based nonprofit, spoke during the rally at Temple Baptist. In addressing the fight against commercialized gambling, he described a yes vote as an act of greed and a no vote as a gesture of love for the Amherst community.

“The struggle in Amherst County is a conflict between love and greed,” Bernal said. “We believe people are worth more than money.”

Sherri Temple, an Amherst resident who already has voted yes to the referendum in early voting, has a much different outlook. She said the tax revenue Amherst County would get, which Rosie’s officials have said is estimated at as much as $1.9 million annually, is much needed in boosting the local tax base and easing the burden on property owners who pay real estate taxes.

“I think it’s a form of entertainment that we don’t have,” said Temple. “I think adults need something in this area. The tax revenue … how could that not be a good thing?”

Pari-mutuel wagering at a glance

According to Rosie’s material, pari-mutuel wagering consists of players competing against each other rather than the house through off-track betting and historical horse racing machines that look and feel like traditional slot machines but are based on previously run horse races.

Bernal told the crowd of roughly 100 gathered during the Temple Baptist meeting that Rosie’s, as a government-sanctioned facility if the referendum passes, would have negative effects on their neighbors, family members and co-workers as “a monument of greed” that would cause many to squander their money in a business exchange mathematically stacked against them.

“It’s inevitable you’re going to lose your money, especially if you keep doing it,” Bernal said. “These guys are not your best friend. They’ll exploit you for all you’re worth. This is the essence of a big con.”

Pamphlets distributed at the rally stated studies confirm the majority of tax revenue such operations generate comes from gambling addicts who lose money on slot machine-like games and is not worth the cost in human suffering.

Temple said she believes the majority of the Amherst County Board of Supervisors was right in passing a resolution of support for Rosie’s a few weeks prior. Vice Chair David Pugh abstained because he said he didn’t think the board should sway the referendum and Chair Jennifer Moore was absent from the vote; the three supervisors who backed the resolution spoke favorably of the economic benefits the business brings.

“I was glad that they did,” said Temple. “It gives you a little more confidence that your board of supervisors is saying this is a good thing for the county.”

Tobey Thurston, an Amherst resident and organizer in the group Amherst Citizens Against Rosie’s, said the facility would bring nothing but heartache to the Amherst community.

“As a property owner in Amherst County, I would rather my taxes go up than have a Rosie’s,” Thurston said. “There’s other ways to do things. Just because something is profitable doesn’t mean you should do it.”

Frank Campbell, a Madison Heights resident and former Amherst County Board of Supervisors member who served the District 5 seat, attended the Rosie’s campaign office opening Sept. 30. He said he would have supported the resolution if still serving on the board and said he looks forward to the business opening its doors in the district he formerly represented from 2010 to 2013.

Having a major business come in and invest in the community with tax revenue, jobs and another dining option is beneficial, Campbell said.

Bernal said the opposition goes beyond a resident having a poker game in his house. “This is predatory gambling. It’s like a wolf after the sheep,” he said of a business setting up pari-mutuel activities with government support. “They want to get the weak in our community to fork over their money.”

None of the board of supervisors attended the rally. County Administrator Dean Rodgers, who has publicly spoken in support of Rosie’s, attended to observe and Drew Wade, who is running unopposed for the District 5 seat that Moore will step down from at the end of the year, was in attendance.

During the board’s Sept. 17 meeting, Wade spoke publicly on the matter and said he doesn’t support Rosie’s coming to the district but he respects others’ opinions. He urged residents to do their own research on issue that will have far-reaching effects and felt supervisors should remain neutral.

“Let the people choose without weight from the board,” Wade said at the September meeting.

Bernal, who said he is in the fight against predatory gambling “to the bitter end,” said Amherst residents would be hurt financially and described the operation as an “an incredible rip-off” and a money grab disguised as economic development. He repeatedly called it a casino, but Rosie’s material at the campaign office open house said it is not a casino since it features historical horse racing machines only and not table games such as poker, blackjack and craps.

Bernal said far more gambling addicts than jobs will be left in wake of Rosie’s if it moves forward.

“The business model is based on addictive gamblers,” said Bernal, adding the project financially exploits residents. “They’re considered expendable…the community suffers, the families suffer. Even the winners suffer because their community is going in the tank.”

Rosie’s material at the open house said the facility is an entertainment destination that will bring nearly 100 new jobs.

“Whatever floats your boat,” said Campbell of pari-mutuel wagering. “I personally don’t do a lot of that, but I don’t fault the folks who do.”

Terry Hunter, a county resident who attended the Rosie’s event, said he enjoys any business development in Amherst.

“I look at all business as a positive for the community,” Hunter said. “This can be a new hub of activity and hopefully expand to the rest of the county. I think it would be a wonderful addition to the county.”

Ernie Dellaverson, regional manager of Rosie’s who oversees its Vinton location, urged county residents to contact town officials in Vinton, visit that site and see for themselves how it operates with a focus on security and community partnerships. The Seminole Plaza center is an excellent location and would be vastly improved if the referendum passes, he said.

“I think there’s a lot of business volume that can be done by fixing this place up, bringing in a Rosie’s and it will probably drive additional business to Big Lots and other leaseholders here as well,” Dallaverson said.

Bernal urged residents at the rally to engage in a mailing campaign.

The referendum’s verdict nears. The jury is those among the county’s more than 22,000 registered voters who participate Nov. 2 and during early voting.

Longtime attorney for the Town of Amherst, Tom Berry, will no longer serve in the role when his contract with the town ends Dec. 31, according…

The Monacan Indian Nation recently purchased more than 1,000 acres on Laurel Cliff Road in Monroe for $5.5 million, a move that ties into the …

A bonus for all Amherst County employees, a new fire truck for the Pedlar Volunteer Fire Department and Rescue Squad, investments in a Madison…

Amherst County’s Apple Harvest Festival is returning for a landmark event after being cancelled last year for the first time in its 50-year history due to the COVID-19 pandemic.

This rendering gives an idea of what a Rosie’s Gaming Emporium would look like from the air.

A sign in front of a new campaign office for Rosie's Gaming Emporium is located in the Seminole Plaza shopping center, where the business would locate if given the green light from a referendum on pari-mutuel wagering.

A sign opposing Rosie's Gaming Emporium and pari-mutuel wagering was on hand at a Sept. 30 meeting at Temple Baptist Church.