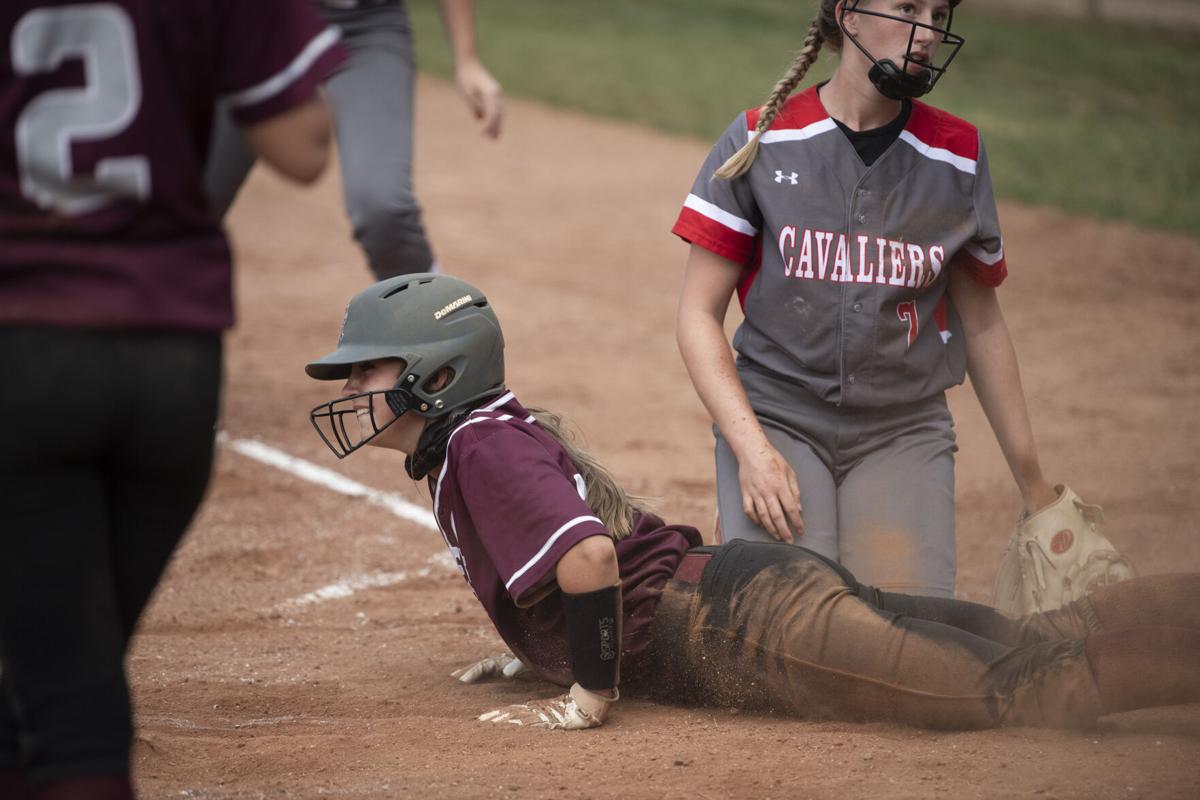 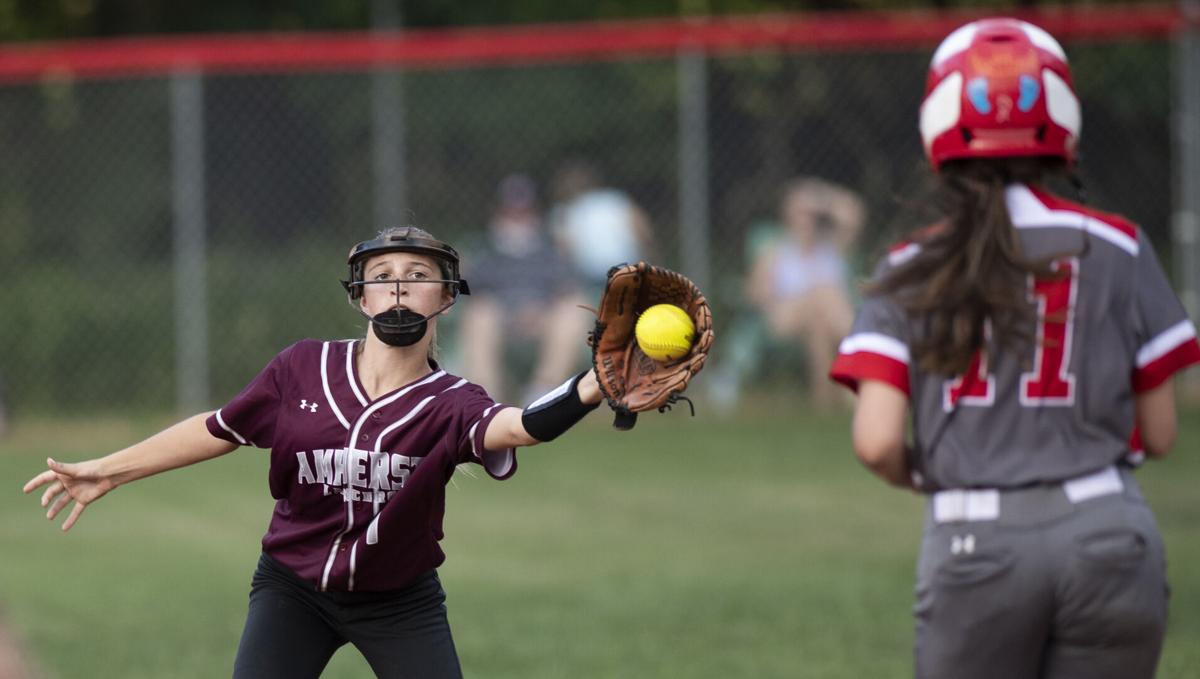 Amherst first baseman Calla Christian takes throw as a Jefferson Forest base runner was late to the bag. 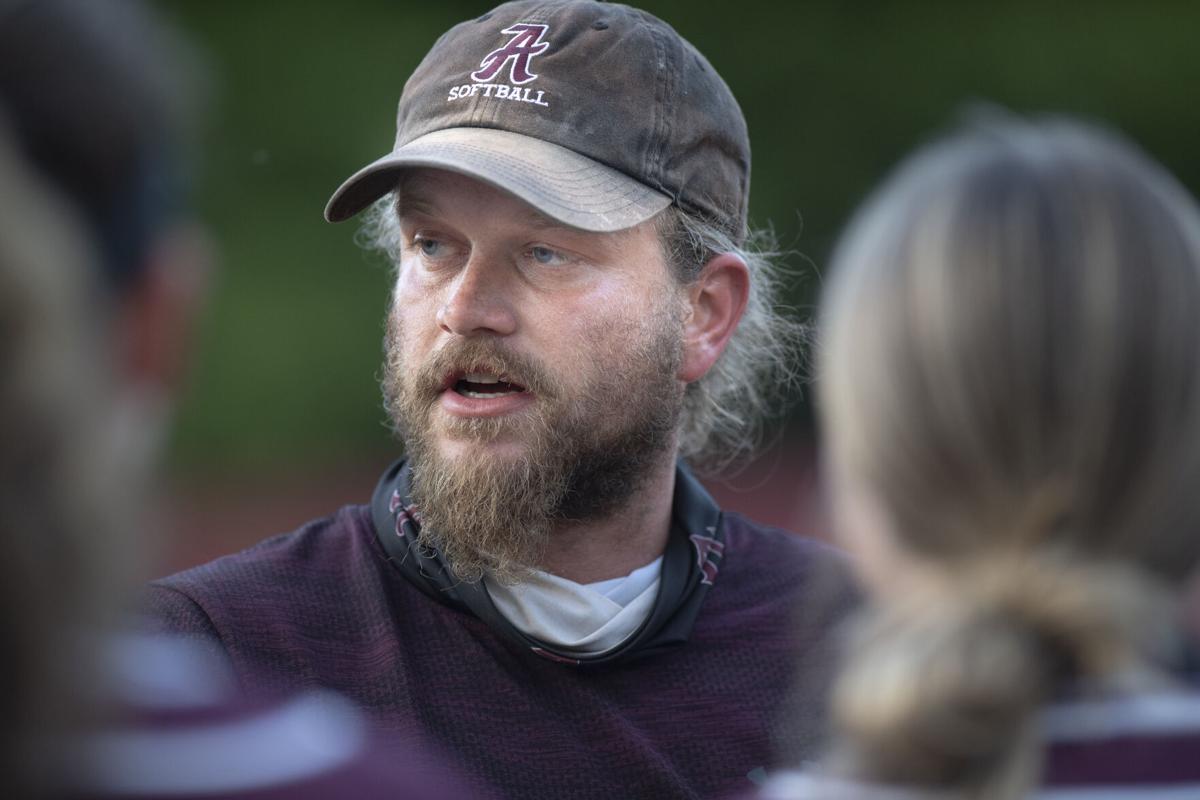 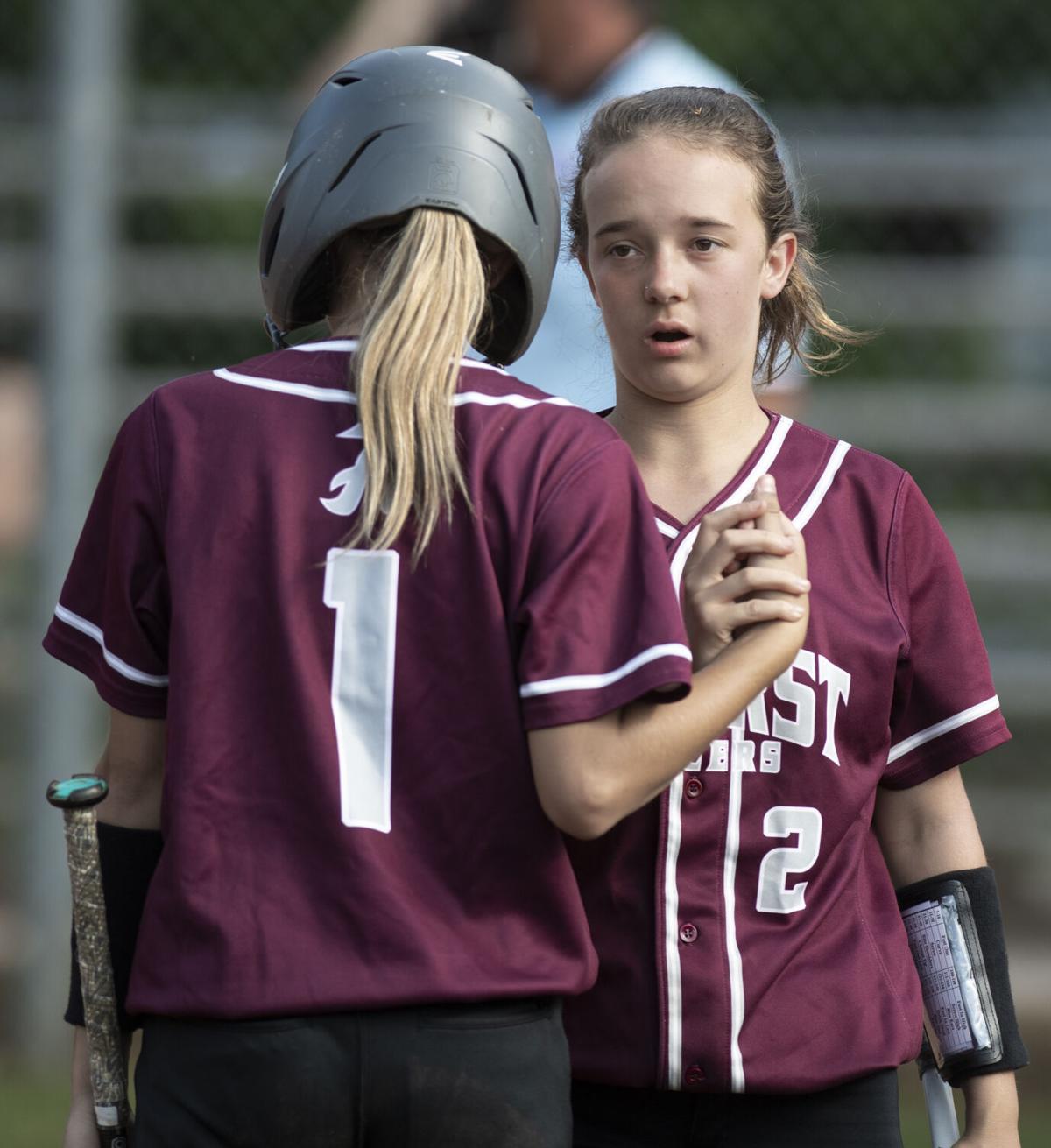 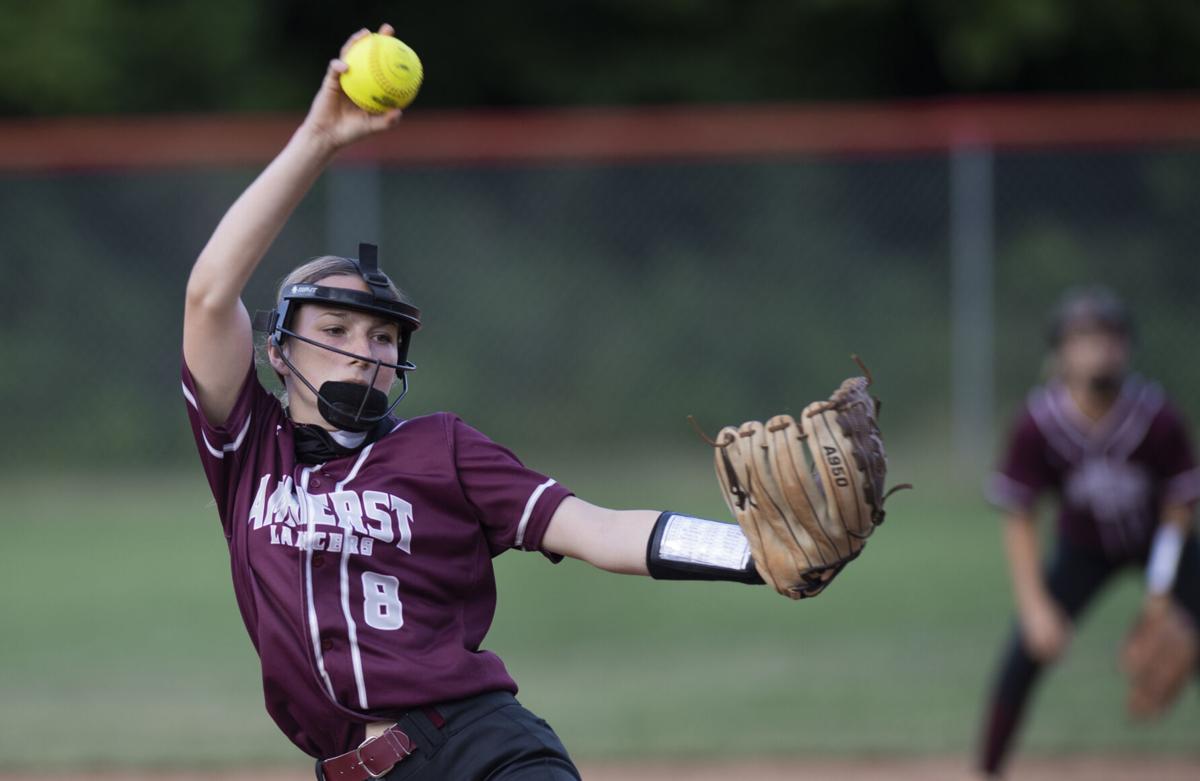 Miranda Watkins tosses a pitch for the Amherst Lady Lancers. 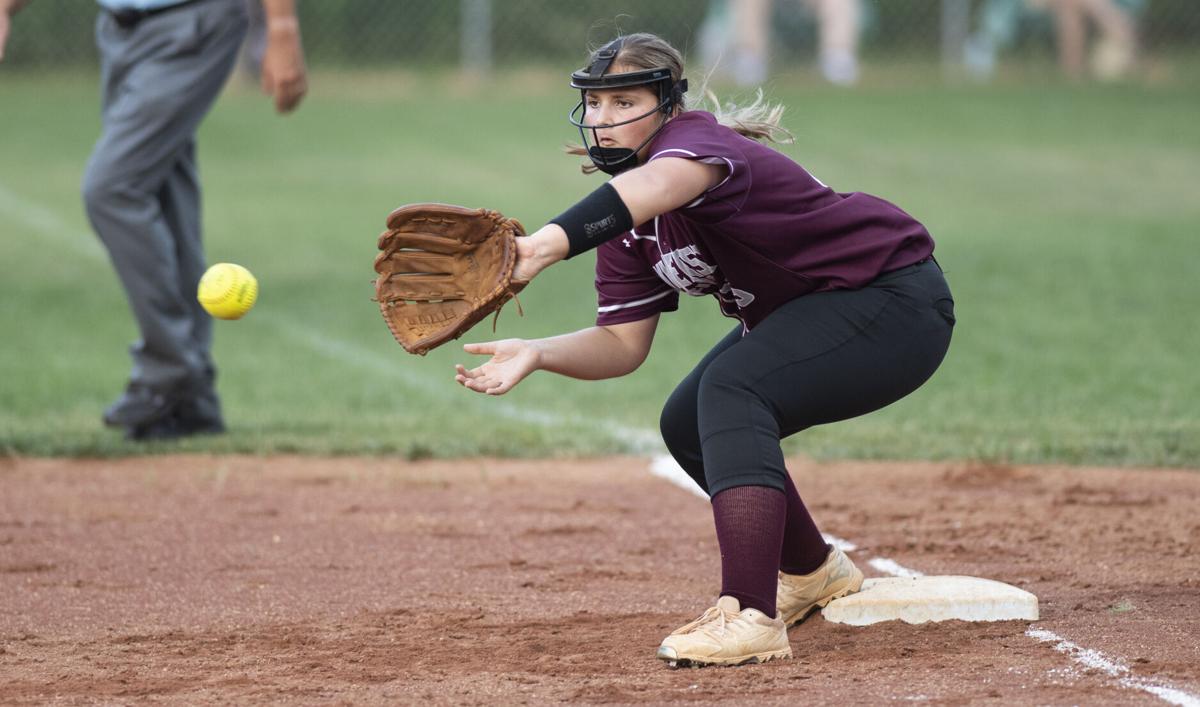 Junior varsity first base player Calla Christian sets to take a throw to the bag for the out. 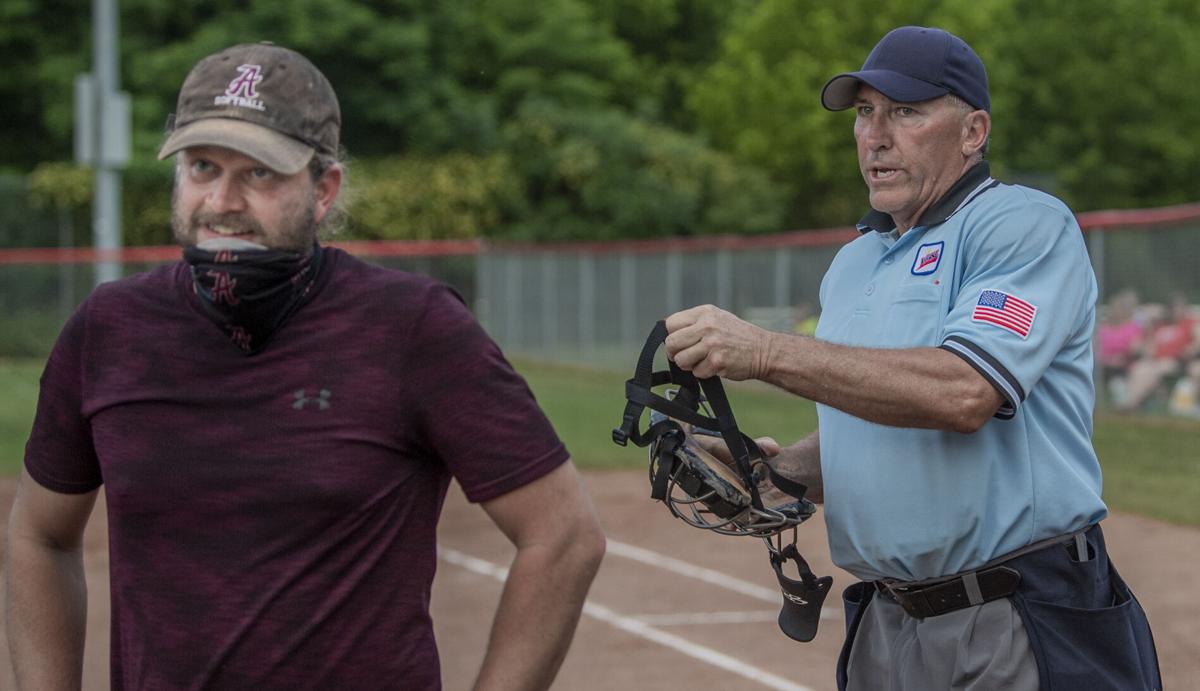 Amherst junior varsity coach Drew Ware heads back to the dugout after chatting with umpire about a close call. 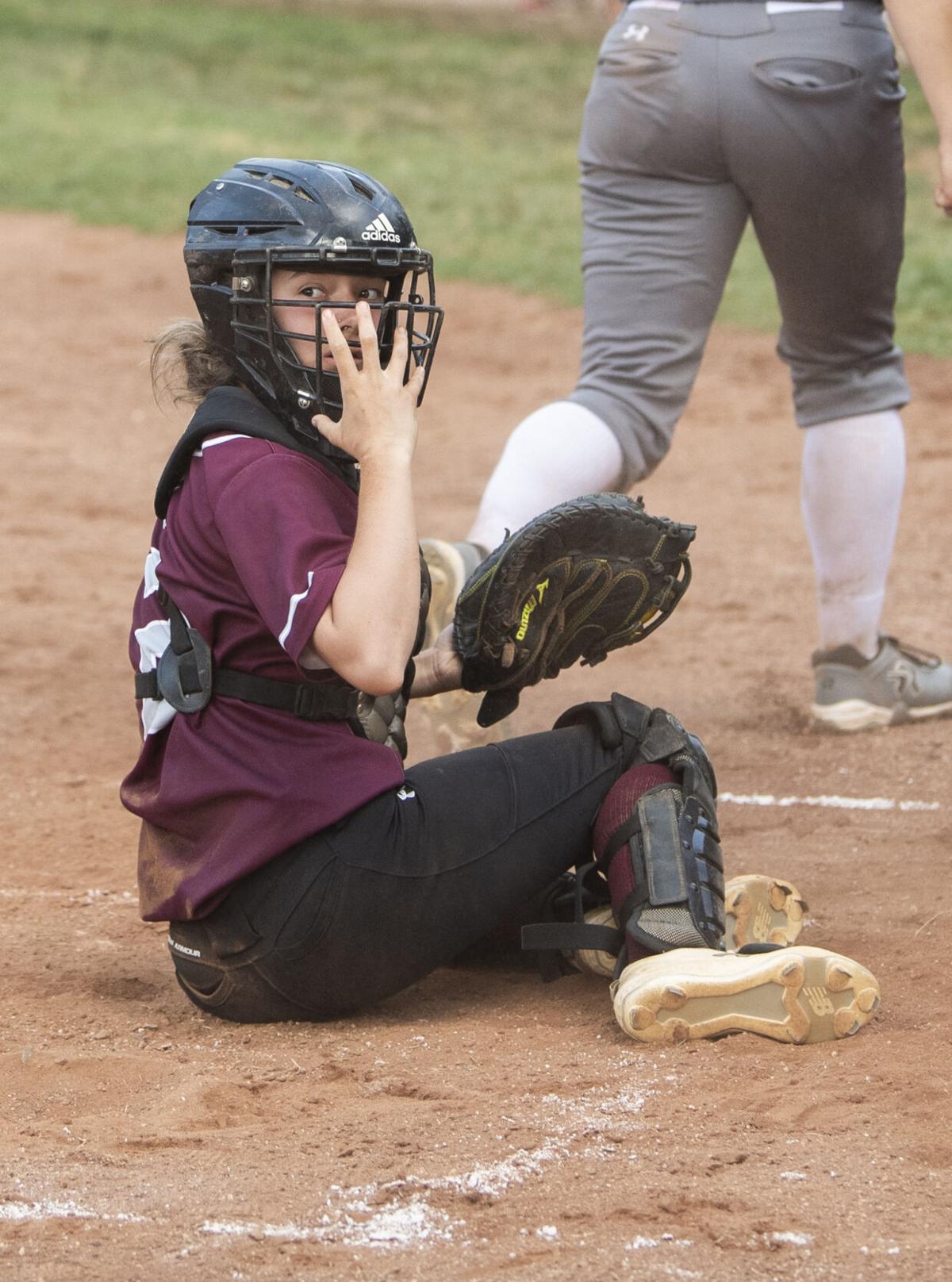 Amherst junior varsity catcher Lexie Roberston looks towards her bench after a Jefferson Forest base runner was called safe on a close play.

Now that most of the playing and number of fans restrictions from the COVID-19 pandemic has been slowly lifted Mother Nature has controlled a lot of area games with rain and lightning storms.

The Amherst junior varsity softball team was ahead of Jefferson Forest last week 2-1 when the rains came, ending the season for Amherst coach Drew Ware and his team

“Really wish we could’ve finished this game,” said Ware. “The girls were solid defensively and were starting to get better at bats at the plate.”

Amherst ended the season with a 5-3 record.

In the circle for the JV Lady Lancers was Miranda Watkins, as she got in 2.1 innings before the rain.

Watkins struck out three junior Cavalier batters, gave up one run while teammate KK Ogden posted one run batted in.

With all the delays and schedule changes Ware said he was able to keep his team interested in the season.

“We had 17 competitive ladies on the team. It was not hard to keep ladies motivated because of their love for the game,” said Ware. “I appreciate everyone’s commitment to this team and that is what I was most proud of. There is something special about putting on the Lancer uniform and representing the county you live in. These ladies understood that and bought in from the beginning.”

The Amherst squad brought lots of power to the plate with six hitters hitting over .400.

Ware breaks down his team with stats along with his comments.

Annie Purvis, batting average of .588: “Annie led the team in batting average this season. She is a strong athlete and even though she is quiet with her voice she is loud with her bat. Annie even made a splash on varsity when she was called up and hit two homeruns early in season against Heritage.”

Calla Christian, batting average of .524: “Calla is an 8th grader that made a big splash in her first experience on JV. She was first on the team with hits (11) and second in RBI’s (8). Calla has a great eye at the plate and uses that to hit her pitch that she wants.”

Miranda Pollard, batting average of .429: “Miranda is a great worker. She does exactly what she is told and that translated into success for her this season. Miranda had 9 hits and drove in 7 runs this year.”

Cheyenne Wall, batting average of .400: “Cheyenne is an incredible athlete with a great spirit for the game. This was her first year playing softball as she grew up playing Dixie Youth baseball. Her game made a seamless transition as she started at short every game as was a rock defensively. Her bat was surprising at how well she caught on. She led the team in RBI’s with 10 on the year.”

“I do want to mention Leah Mcfaden and KK Ogden. Both are 8th graders and waited for their opportunity to come. When I called on them they had immediate success. Leah batted .444 and KK batted .429. Both came up with clutch hits in different games.”

The Amherst girls took care of business when pitching, which Ware addressed.

Annie Purvis: “Before being called up to varsity she was the lead pitcher. Annie threw 15 strong innings striking out 14 while only giving up 5 runs.”

Delaney Sipes: “Delaney was our lefty pitcher who came in relief for most games for us. She pitched in five games for us and did a great job hitting spots and using her defense.”

Miranda Watkins: “As an 8th grader she really stepped up when Annie was called up to varsity. She became the main starter the second half of the year and did an amazing job. She pitched 13.1 innings only giving up 2 earned runs and striking out 14.”

Ware summed up the shortened season.

“I just want to say I am blessed to be able to coach a wonderful group of athletes. I know not everyone got mentioned by name but every lady played a part in the success of our team,” said Ware. “I want to thank God for giving me the opportunity to help these ladies grow and to get better. Without Him none of this is possible. Our softball program is young and full of good ball players. The next few years should be an exciting time for softball and I am fortunate to be a part of it.”

The Madison Heights 15U All-Stars won the state championship June 27 after sweeping Mecklenburg in two straight games, earning a trip to the D…

The Lancer baseball team, along with having their coach John Apperson named Seminole District Coach of the Year and Christian “Chick” Martin t…

Amherst first baseman Calla Christian takes throw as a Jefferson Forest base runner was late to the bag.

Miranda Watkins tosses a pitch for the Amherst Lady Lancers.

Junior varsity first base player Calla Christian sets to take a throw to the bag for the out.

Amherst junior varsity coach Drew Ware heads back to the dugout after chatting with umpire about a close call.

Amherst junior varsity catcher Lexie Roberston looks towards her bench after a Jefferson Forest base runner was called safe on a close play.