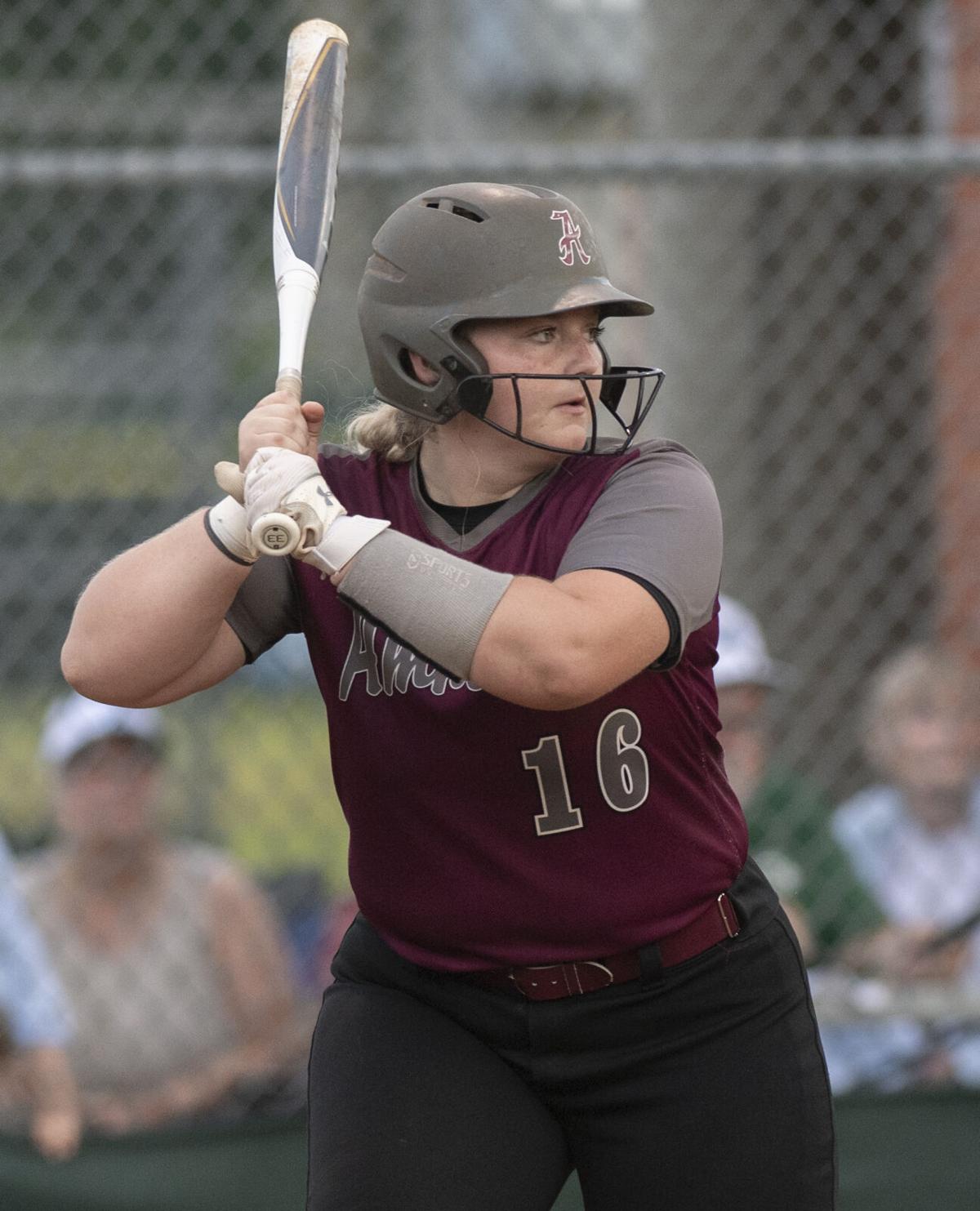 Amherst batter Maddie Jennings waits for a pitch during the state championship game.

Maegan Lloyd fields a late throw to second base as an E.C. Glass base runner is safe. 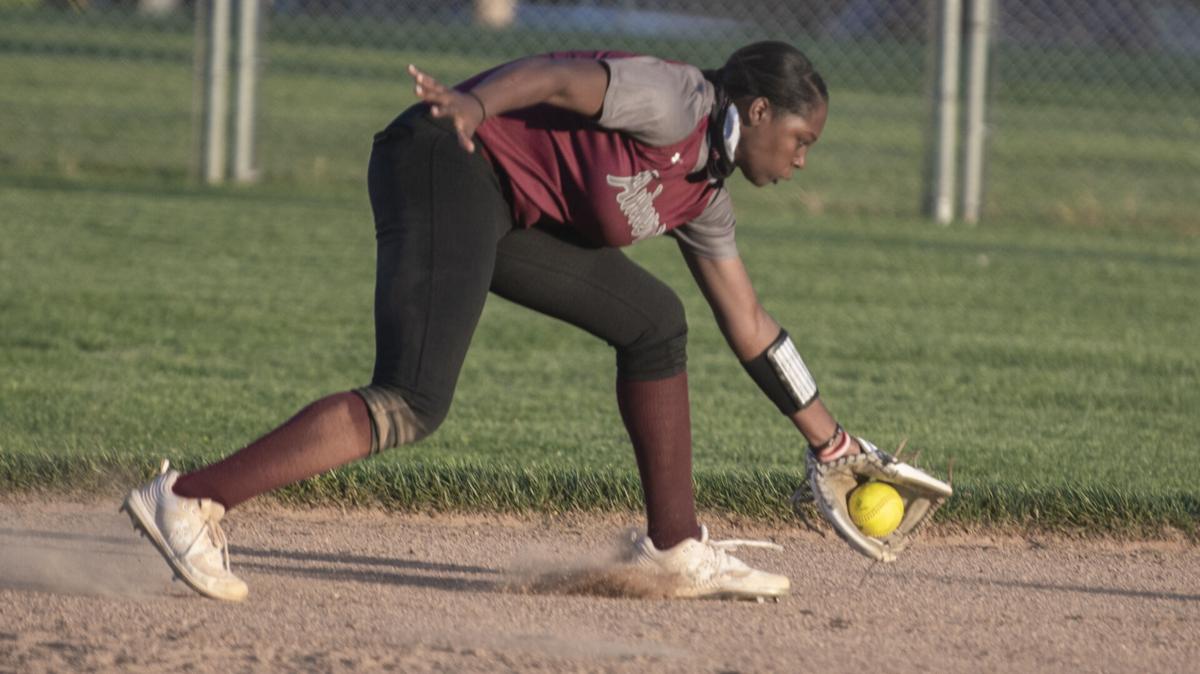 Amherst shortstop Tyah Charlton scoops a hot grounder and would throw to first for the out. 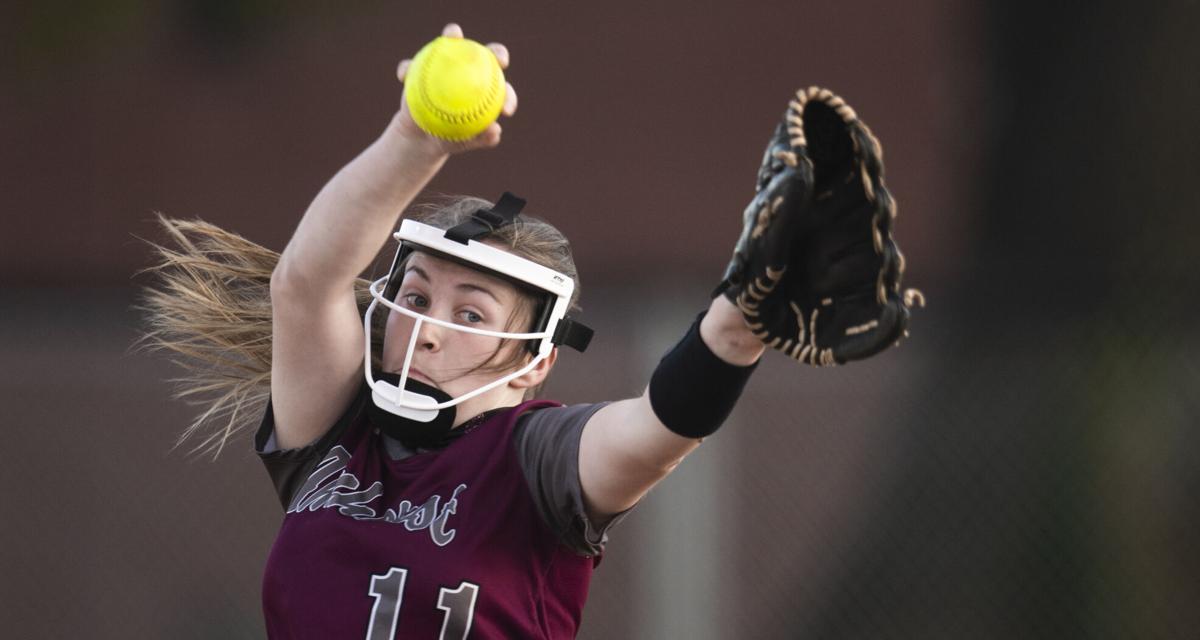 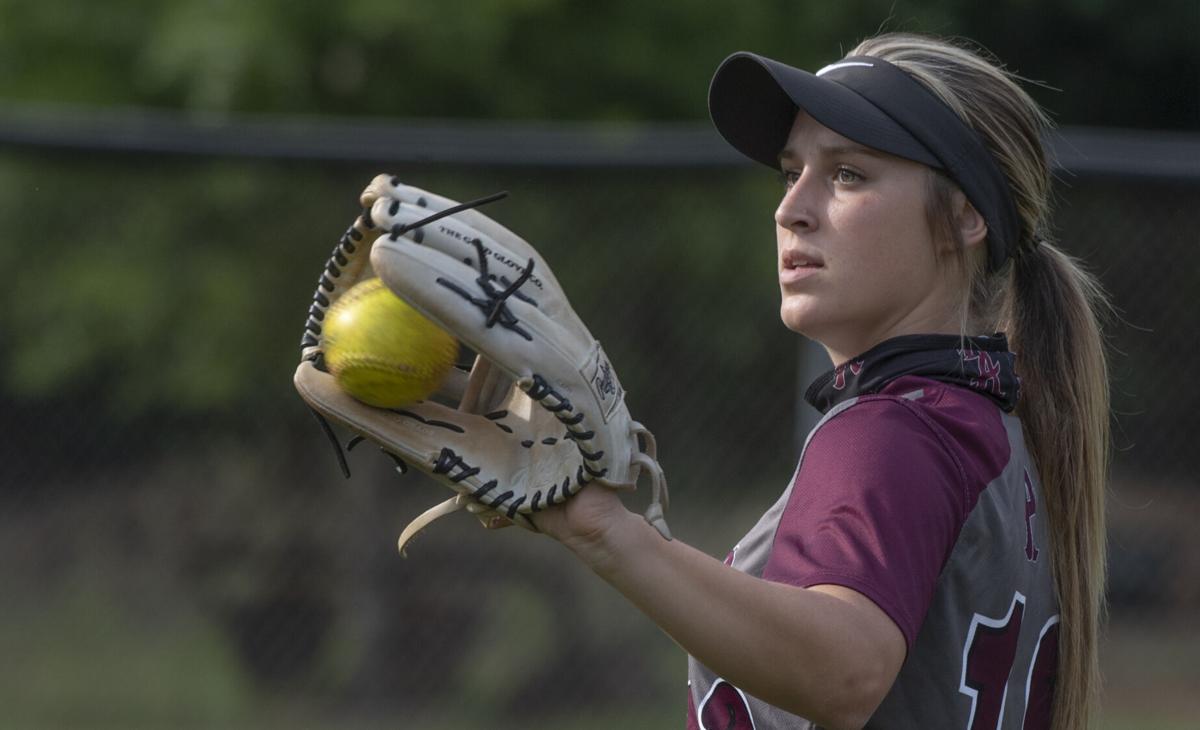 KK Ramsey gets loose before taking over her duties at centerfield. 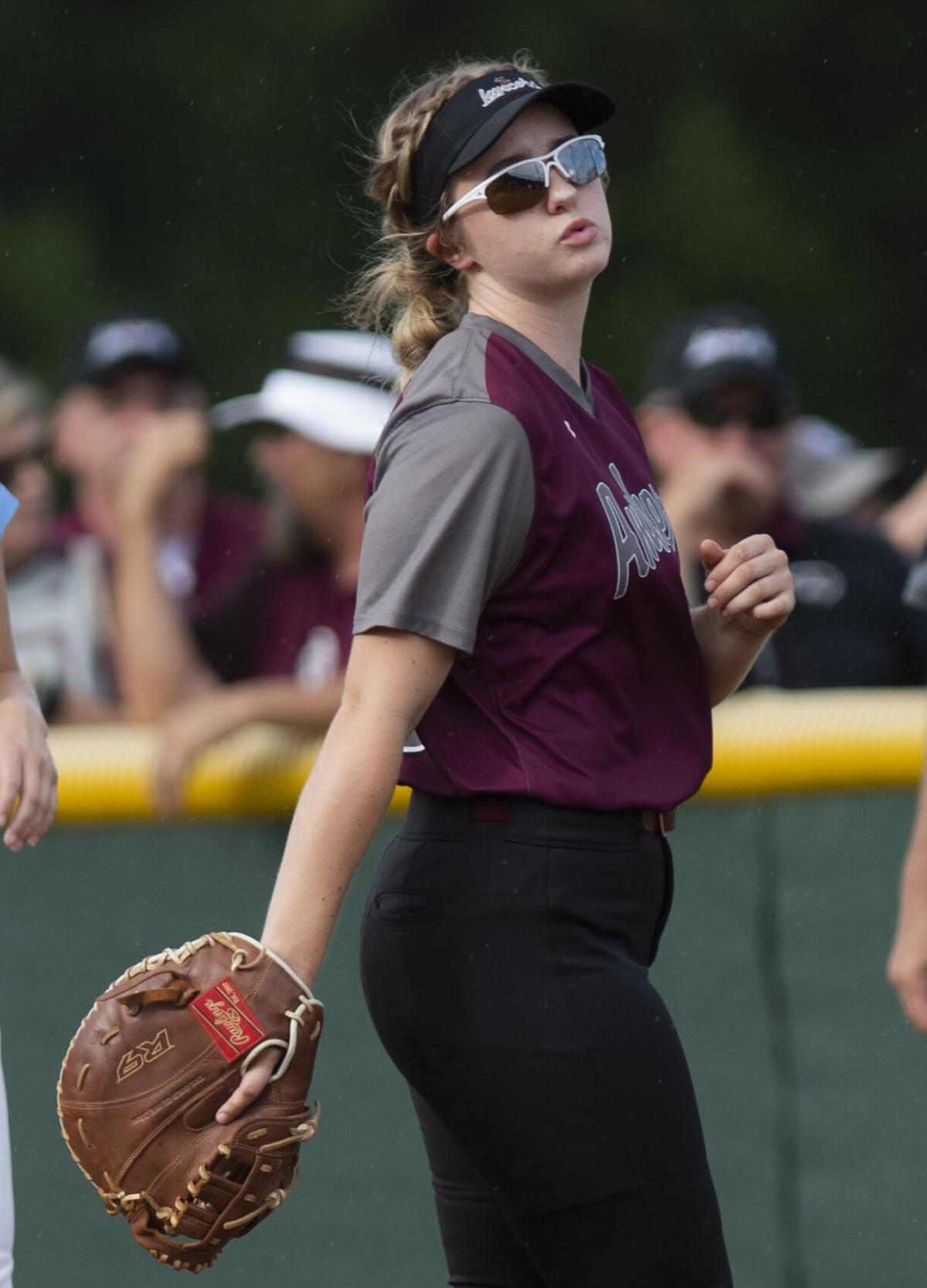 Amherst first baseman Taryn Campbell waits for a Hanover batter to step up to the plate. 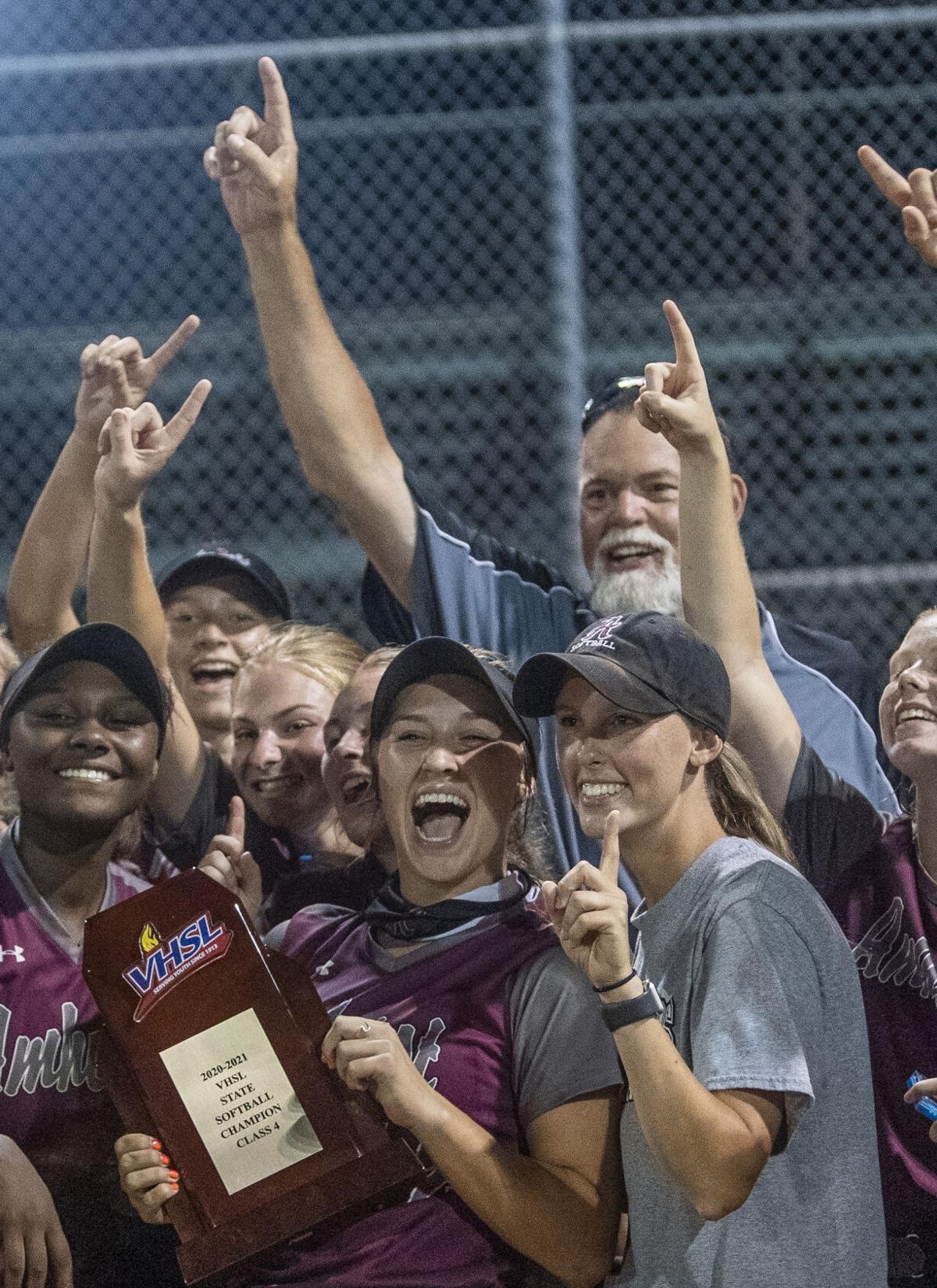 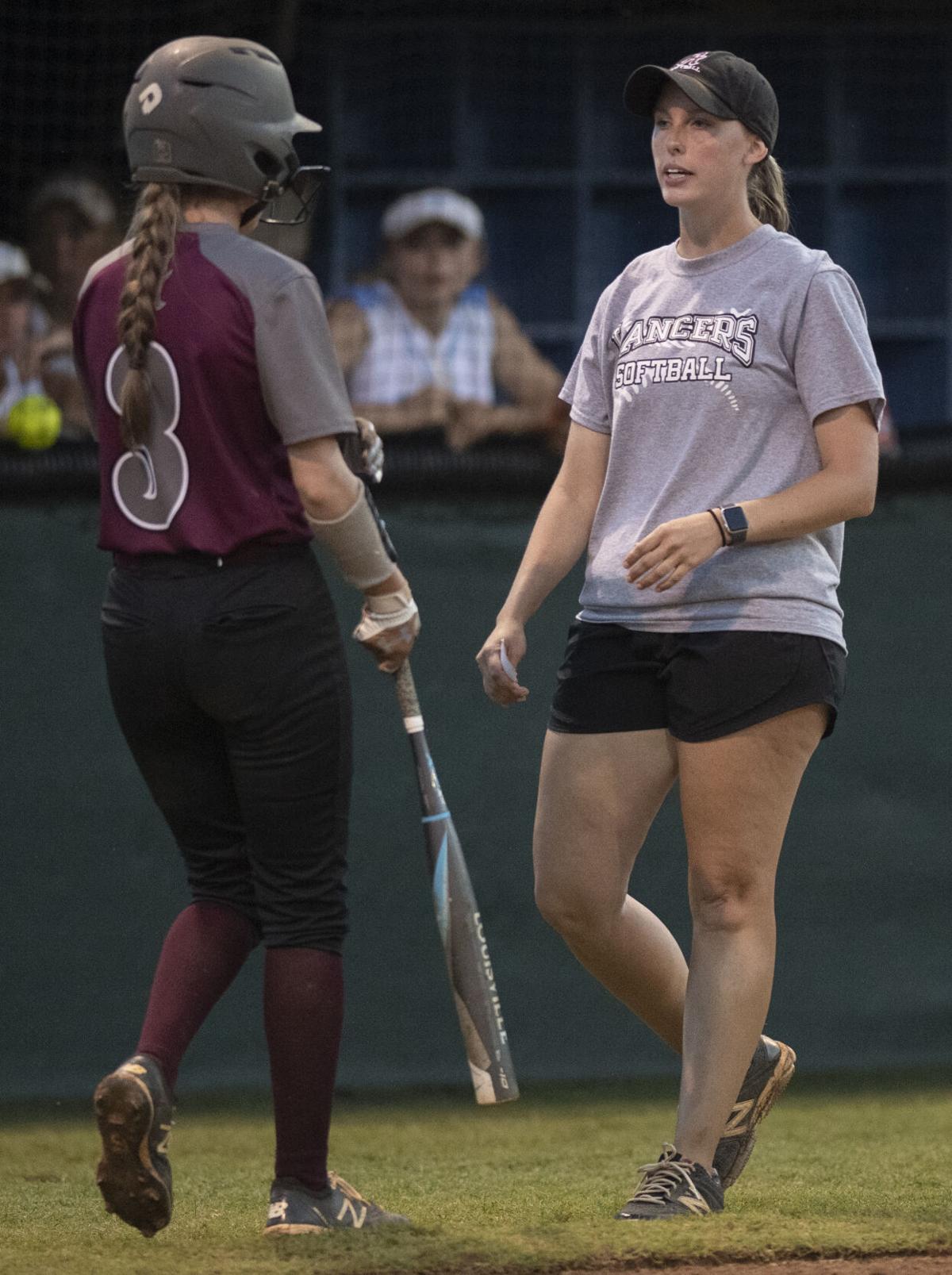 Amherst softball coach Samantha Thacker (right) chats with Maegan Lloyd prior to her at bat in the state championship game at Hanover.

Thacker shares the coaching award with Rustburg coach Katie Bingham, who also won a state championship as did Appomattox.

The softball team captured its first state title for Amherst with a 2-0 victory against Hanover on June 26.

“To receive coach of the year is an honor,” said Thacker. “This is a huge reflection of my team, though, because I could not receive this award without their trust in me, their hard work, and their dedication. This year was very different and at times difficult, so to be able to come out at the end with a region championship and state championship, really does just show that hard work, time, and commitment do pay off. I am so thankful to have received this honor.”

“Sam did an incredible job leading this young team all season. She is a fierce competitor that knows the game and does a great job teaching these young ladies,” said Ware. “Sam has put Amherst softball back on the map making history multiple times her first three years as a leader of this team. She has a bright coaching future and I am glad she is leading the ship.”

The Amherst team had six players named to the Seminole All- District first team, including pitcher, catcher, first baseman, second baseman, shortstop and one outfielder.

Thacker lists all her postseason picks while adding a comment on each player.

1st team Pitcher Dylan McNerney: “Dylan had an incredible season this year, pitching almost every inning in the regular season and every inning during the magical postseason, 105 innings. She pitched some thrilling games this season with a record of 15-2 and pitching 7 shutouts. There is so many great things that can be said about this athlete, but one thing is for certain, she has an incredible heart and this is just the start for her!”

1st team Catcher Maddie Jennings: “With a roster full of young players, MJ was the steady senior that led not only behind the plate but on the offensive side as well. The connection and confidence she and Dylan had in each other, as pitcher and catcher, was so fun to watch! Also, her power was undeniable and we relied on that a lot this season. She had some big hits for us in some big games, including multiple homeruns on the season. She truly is going to be missed!”

1st team 1st base player Taryn Campbell: “Taryn had a strong junior season starting at first base. She shows discipline at the plate, which led to some great quality at-bats throughout the season. She is strong defensively as well and came up with some big plays for us during the season and had 0 errors. We are excited that she will be back next year and expect a lot from her.”

1st team 2nd base player Maegan Lloyd: “Maegan was a spark for us this season with stepping into the lead-off position her first year on varsity, as a sophomore. This may come as a surprise, but this was her first year ‘slapping’ and it was a seamless transition as she led our team in batting average. With Maegan’s speed she continued to find ways to get on base in key moments, especially against some of the top pitching we saw this season. She is going to continue to be a great asset to this program.”

1st team shortstop Tyah Charlton: “As a true freshman, Tyah stepped right up in the start just like she has always been playing varsity. She is a stellar athlete with an incredible work ethic. Tyah has so many tools from showing her range defensively to her power offensively. Tyah also hit multiple homeruns on the season and had hits in big situations. It is going to be so exciting to continue to see her growth over the next few years.”

1st team outfield, Kaelyn Ramsey: “KK was our fearless leader in the outfield. She was our vocal leader as well as a major contributor in the lineup. Her energy and timeless hits helped spark some major comebacks. She is a consistent hitter who shows power at the plate. She is a big part of this program and we are lucky to be able to have her again for next season.”

2nd team outfield, Kayleigh Combs: “Kayleigh is a steady rock for the team in left field. Her defense was key for us making big plays consistently throughout the season. She also came up with a big bat this season, in the second hole. She was able to put the ball down in bunt situations, as well as get hits when needed. She is another junior that we are excited to have been for next year!”

Honorable Mention outfield, McKayla Padgett: “A gritty sophomore that transitioned from the infield to the outfield for us this season. She held down the right field position with a calming presence. Any ball hit her way, we were confident that she could handle the situation. She is another sophomore and we can’t wait to see her evolve more over the next few years.”

Honorable Mention utility, Sienna Fielder: “Sienna started off the year behind the plate for us while MJ was coming back from an injury and then she finished out the year at third base. She has a knack for putting her nose on the ball and made some big defensive plays for us in our tournament run. She has a bright future ahead.”

“I want everyone to know that this year’s success was a team effort and these are great honors for these players for their work throughout this season, but in the end we ALL get a ring,” Thacker said in an email. “Which truly shows the greatness of this strong team.”

How sweet it is: Amherst softball team heading to World Series

The Amherst National Sweetees softball team is headed to the World Series in Alexandria, Louisiana to start play on July 31.

The Madison Heights 15U All-Stars won the state championship June 27 after sweeping Mecklenburg in two straight games, earning a trip to the D…

MECHANICSVILLE — In a battle of sophomore pitching virtuosos, Dylan McNerney did not blink.

Amherst batter Maddie Jennings waits for a pitch during the state championship game.

Maegan Lloyd fields a late throw to second base as an E.C. Glass base runner is safe.

Amherst shortstop Tyah Charlton scoops a hot grounder and would throw to first for the out.

KK Ramsey gets loose before taking over her duties at centerfield.

Amherst first baseman Taryn Campbell waits for a Hanover batter to step up to the plate.

Amherst softball coach Samantha Thacker (right) chats with Maegan Lloyd prior to her at bat in the state championship game at Hanover.