Amherst B-Team coaches Alex Dodgion, center, and John Apperson talk to the team after a recent loss to Brookville. 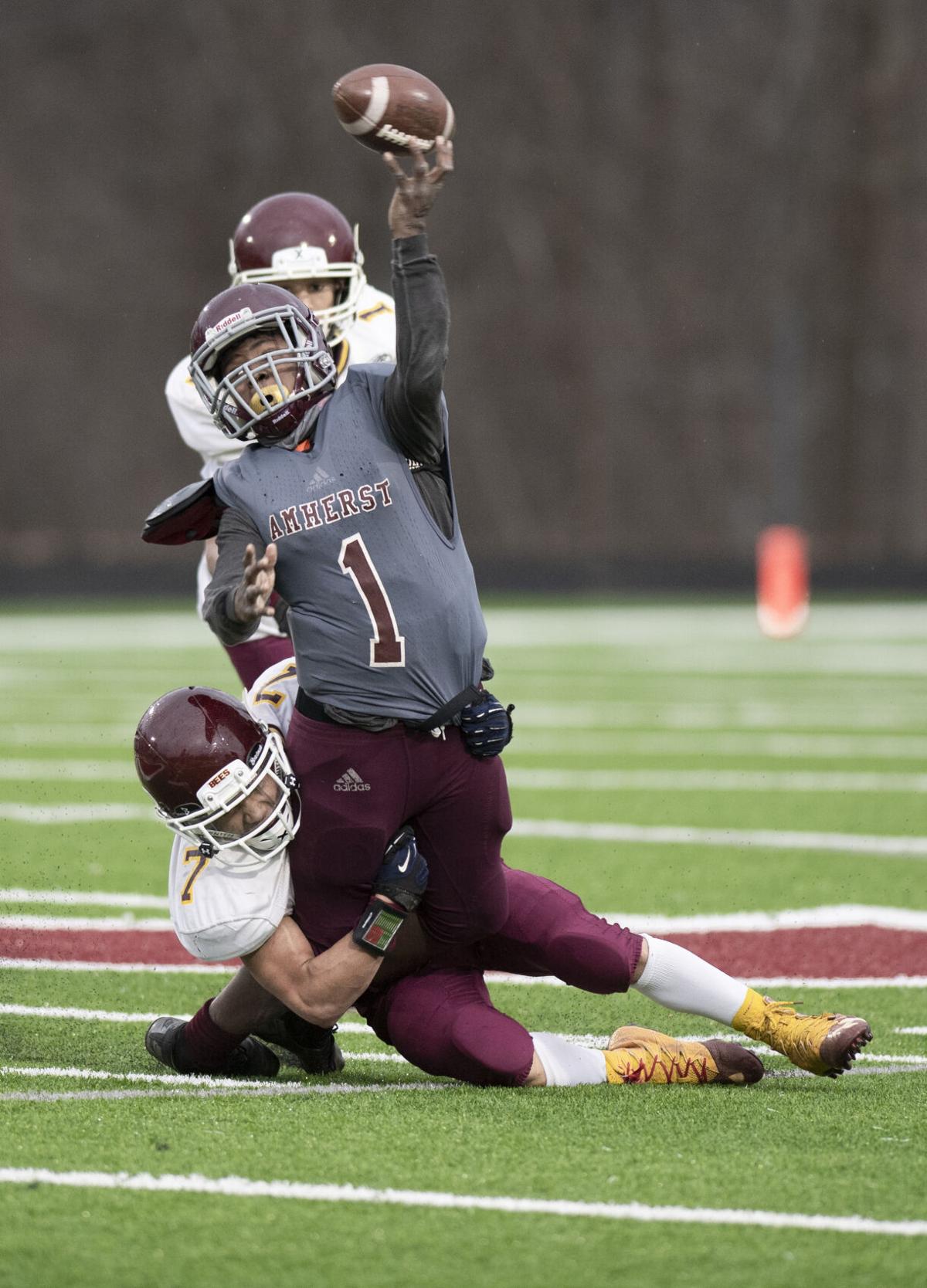 Amherst B-Team quarterback Devonte Wade avoids a sack and gets off pass against Brookville. 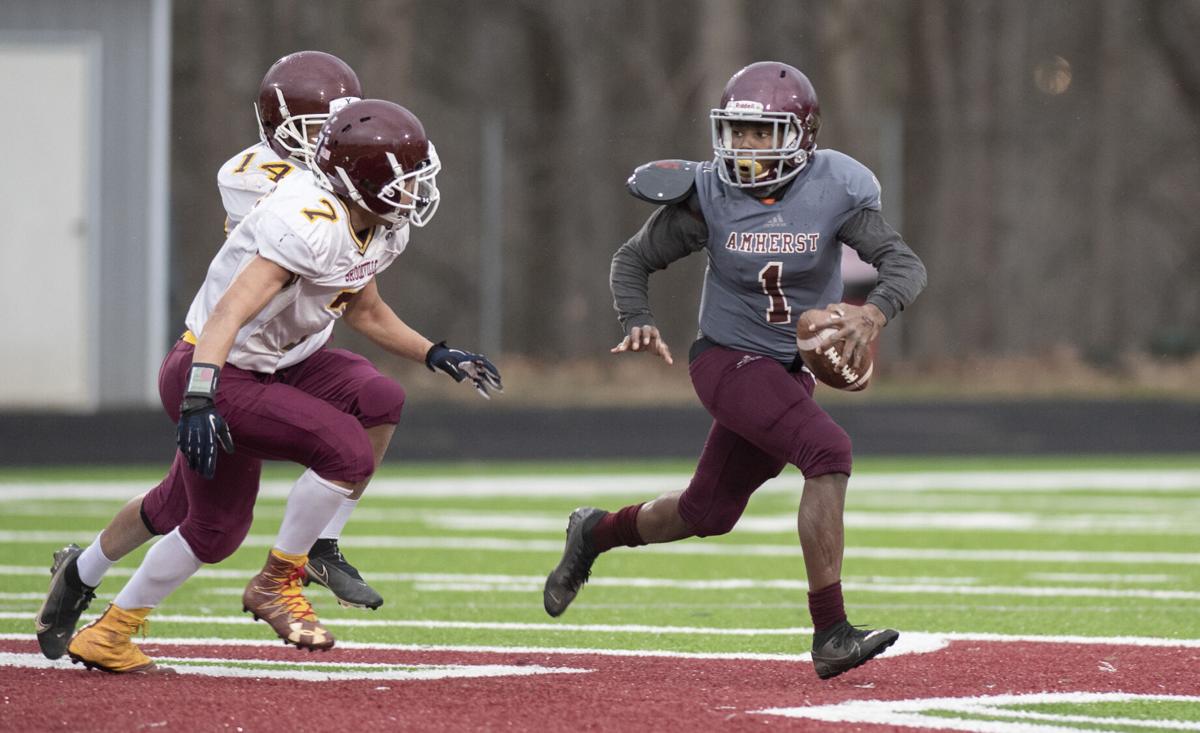 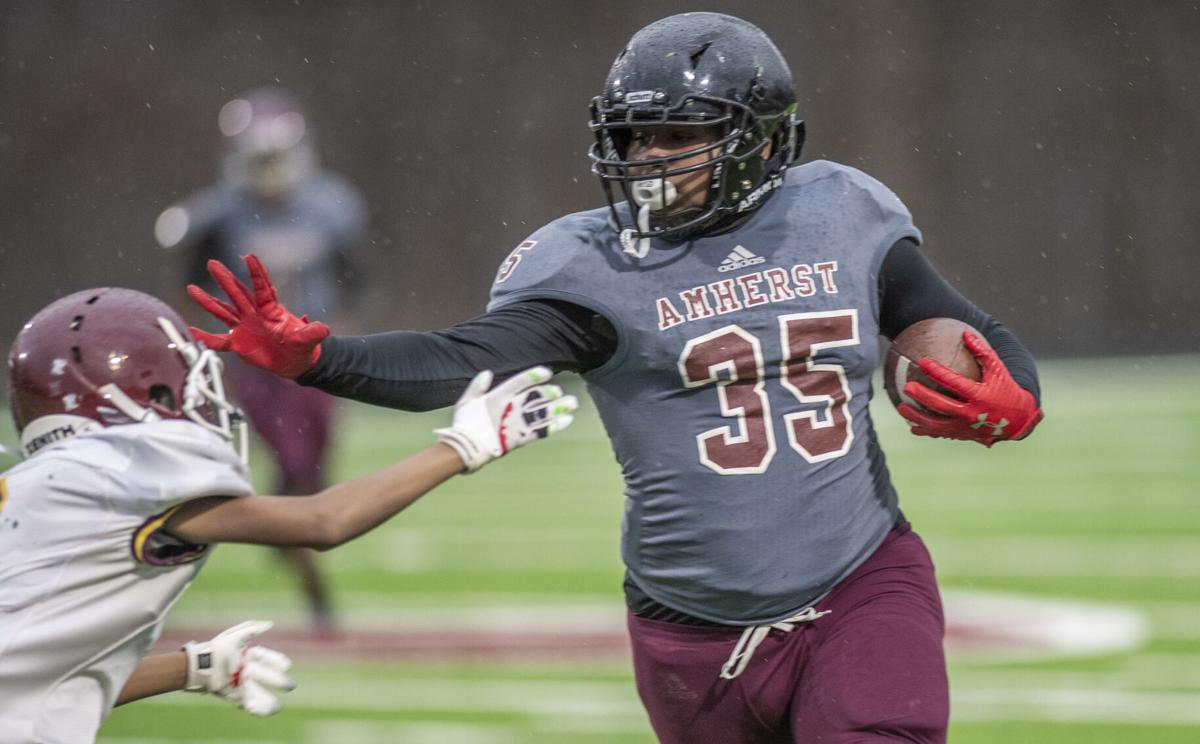 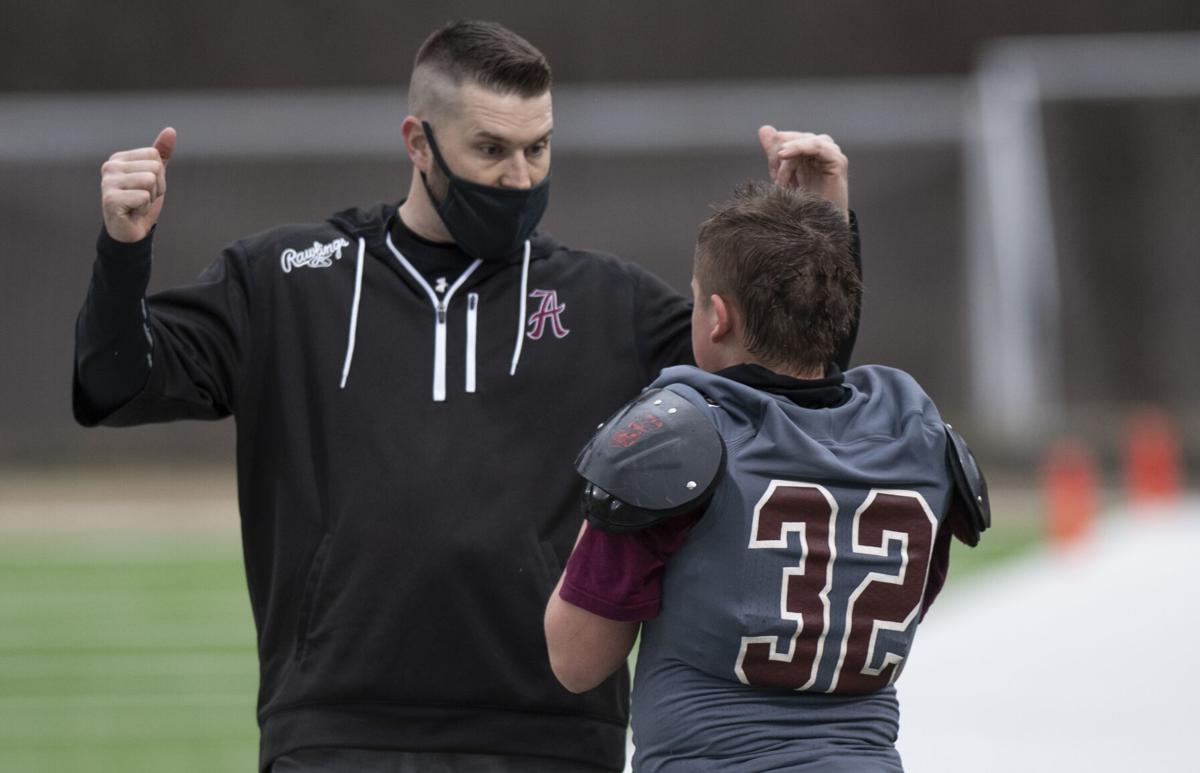 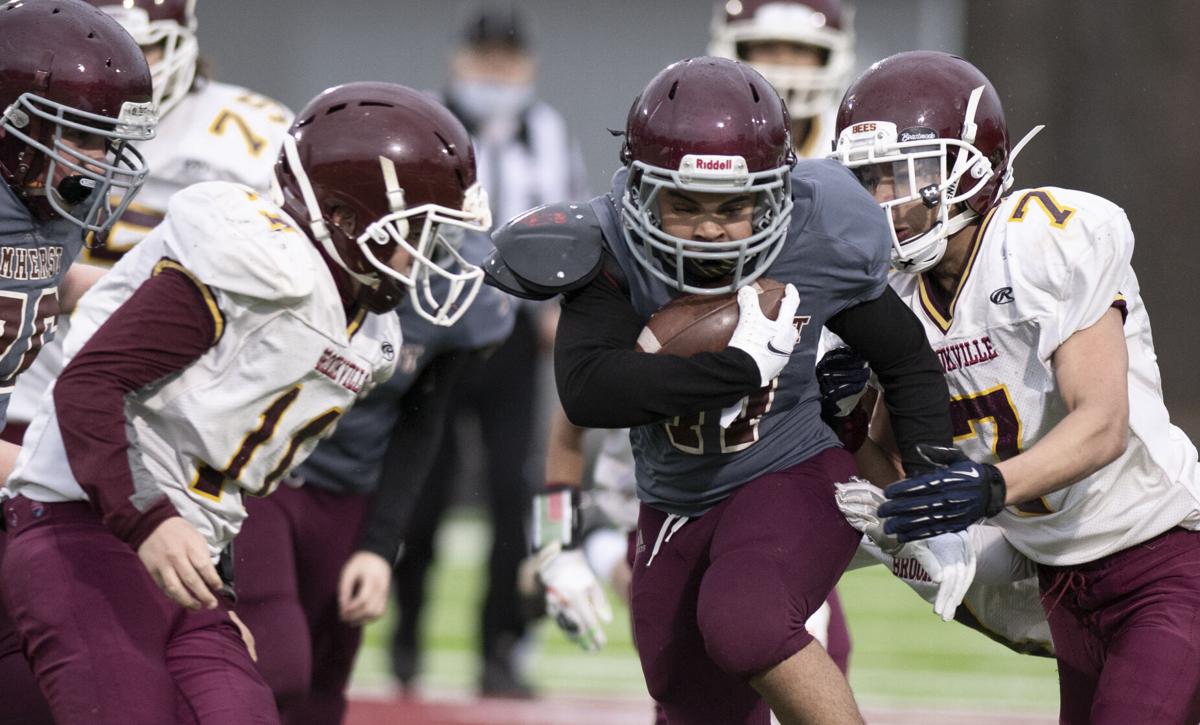 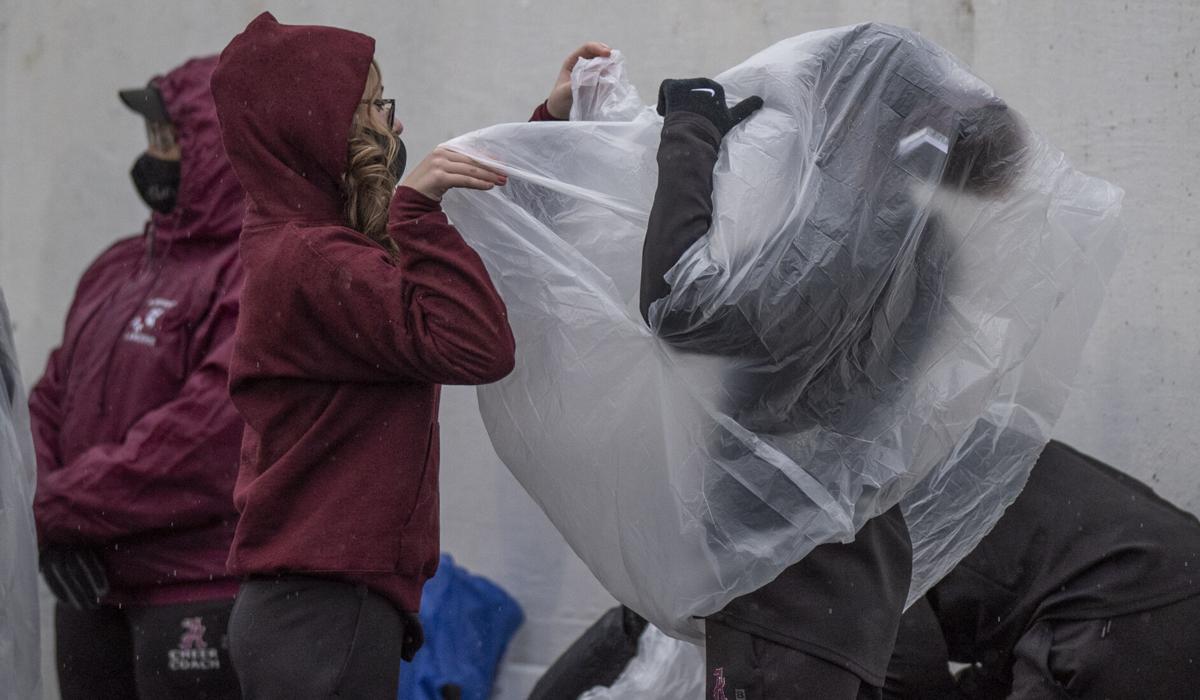 Cheerleaders help each other to stay dry when a recent Amherst B-Team game got some rain.

The Amherst B-Team football squad started eight years ago when the county’s two middle schools, Monelison and Amherst, joined together as one team.

In the debut season Alex Dodgion and Jason Cox ran the program as co-head coaches but since that first season Dodgion has been at the helm.

Dodgion addressed how he feels combining the two teams has worked out.

“I feel that blending the two middle teams has been a huge success. With the B-Team, the players have a chance to bond and grow together beginning in seventh grade, whereas before they didn’t play together until ninth grade,” said Dodgion. “Those extra two years make a huge difference when trying to grow and improve a program like we are in Amherst County.”

This season has been crazy for all involved in sports because of the COVID-19 pandemic. The B-Team switched to playing on Monday night.

“Playing games on Mondays has definitely been an adjustment for us this season. For years we have been used to practicing Monday-Wednesday, having a game on Thursday, and being off Friday-Sunday to recover,” said Dodgion. “Now we spend most of our week after a Monday game recovering instead of have a quality practice. If this is how it’s going to be in the future, then we will make it work. Just like anything in life, when we are faced with adversity, we do any we can to overcome it and continue to get better.”

The team is off to a 1-2 start with quarterback Devonte Wade leading the Amherst offense.

“Devonte’s ability to read the field and make plays is incredible,” said Dodgion. “There have been times where I think to myself that he only has a one or two-yard gain and he slips away from the defenders and makes a huge play to set up our offense again.”

Also providing an offensive punch is Nic’Khale Fleshman with his contribution of rushing and a pass reception for scores.

“Nic’Khale is definitely a bruiser with deceptive speed,” said Dodgion. “He will run people over up the middle then outrun a linebacker or defensive back on his way to the end zone.”

Fleshman also is the main man on defense in the linebacker spot with his team-leading stats in big hits and tackles for a loss.

Dodgion said opponents do not run up the middle against Fleshman.

With only a few games remaining Dodgion said his goal is to continue to get better while preparing his players for the next level.

'Only the beginning': Lancer JV team holds on against LCA for undefeated season

Going into the Lady Lancers volleyball match at Jefferson Forest there were slim hopes of making then playoffs.

In Salem, Cam Leftwich rushed for 118 yards and a touchdown while backfield mate Zavione Wood provided an additional 108 yards on the ground a…

The Amherst varsity volleyball squad improved its record to 4-6 after sweeping Heritage High School March 30 on the Lady Pioneers court.

Amherst golf team comes out on top in April 1 contest

The Lancer junior varsity football team is playing some serious ball by jumping out to a 3-0 record, racking up 96 points while the defense ha…

Amherst B-Team coaches Alex Dodgion, center, and John Apperson talk to the team after a recent loss to Brookville.

Amherst B-Team quarterback Devonte Wade avoids a sack and gets off pass against Brookville.

Cheerleaders help each other to stay dry when a recent Amherst B-Team game got some rain.