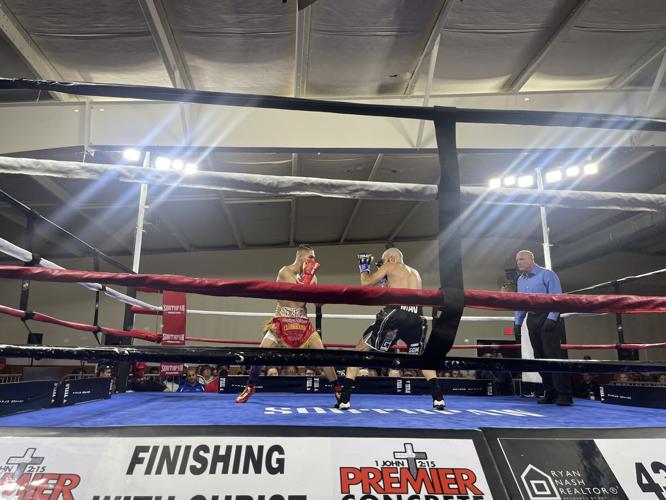 Austin Deanda (red trunks) squares off with Chris Rollins in the middle of the ring during a Nov. 19 fight at the Boonsboro Ruritan Club. 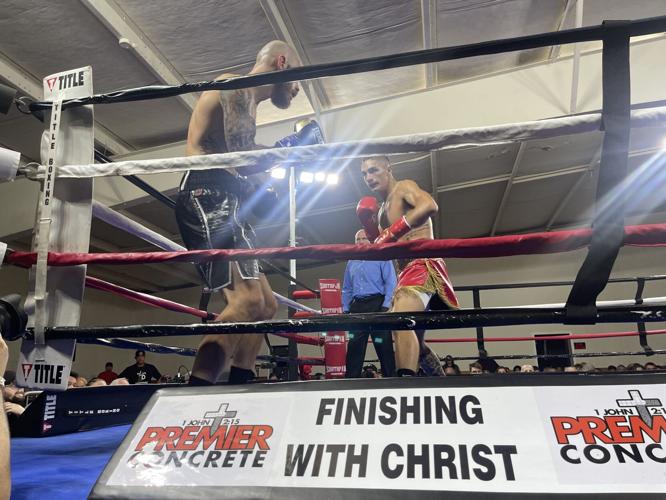 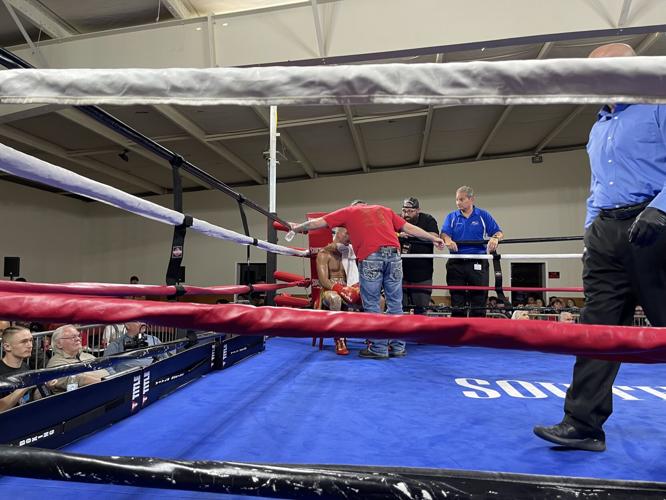 Austin Deanda and his trainer, Scott "Cujo" Sigmon talk in between rounds during a Nov. 19 fight at the Boonsboro Ruritan Club. 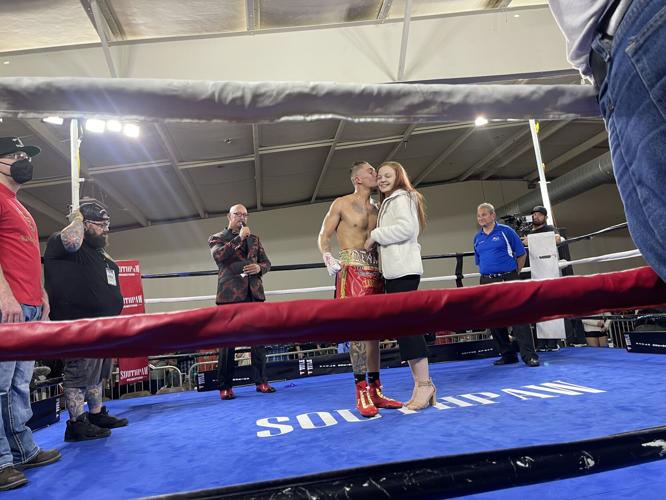 Austin Deanda and his fiancee, Bree Adams, after Deanda proposed following his unanimous decision victory over Chris Rollins on Nov. 19 at the Boonsboro Ruritan Club.

As Austin Deanda marched to the ring inside the Boonsboro Ruritan Club on Saturday night, there was no doubt who the crowd came to see. After all, it was a homecoming fight for the Amherst County native, who was fighting in his tenth professional fight.

Known also as "The Native Nightmare," Deanda fought in Central Virginia for the first time as a professional on Nov. 19, and looked every bit the part of a boxer ready for bigger challenges, even at the young age of 19.

Deanda (10-0, 6 KOs) defeated Charlottesville's Chris Rollins by unanimous decision, outclassing his opponent over all eight rounds. The young boxer didn't drop a single round in the fight, according to each of the judge's scorecards, who all scored the fight 80-72 in favor of Deanda.

Deanda was the aggressor from the opening bell, walking down Rollins pretty much all fight, landing several blows that wobbled Rollins into the ropes. Even as the fight carried into the later rounds, Deanda appeared to get more comfortable with the bout.

"I'm a fighter of all trades," Deanda said after the fight. "I could've knocked him out in the fifth, sixth, seventh or eighth round, but it wasn't about that for me. I wanted to punish him. He said I was a rookie and said I wasn't going to take him out. I wobbled him a couple of times but he couldn't touch me."

Deanda's trainer, Scott "Cujo" Sigmon, who has more than 50 professional fights of his own, including a fight against former world heavyweight champion Roy Jones Jr., said Deanda's performance lived up to a quote that Sigmon told the young fighter a long time ago.

"Class shows over time," Sigmon said about Deanda's ability to get better as the fight progressed.

The trainer said he and Deanda have worked hard on his foot speed, allowing him to "not have to take the damage that I did," Sigmon explained.

Throughout the fight, Deanda seemed unflappable, at times playing games with his opponent Rollins. And at his age, his trainer said it's "rare for a 19-year-old, with no amateur fights, to already be 10-0 and he's barely been boxing for two years as a professional."

Looking more like a veteran, Deanda said he's looking to Sigmon for his next steps, but admitted he's getting "better and better" as he goes on and is ready for a step up in competition.

Sigmon said they are trying to push his competition level up more, while acknowledging Rollins was a good fight for Deanda.

The hope for Deanda and his trainer is that he could compete for a regional title under the World Boxing Council. They also hope for him to become rated by the council by his 15th or 16th fight.

"He is the real deal, and the important thing to remember is he's still a baby," Sigmon said. "And he's still doing this good. People do not realize that they have a future world champion living right here from Amherst, Virginia."

Having the fight locally for Deanda was a huge success, Sigmon said. He added the fight sold out in only five days when tickets were released 12 weeks before the fight.

Hoping for up to four fights for Deanda in 2023, the trainer and promoter said he's going to try to host at least one in the area, as the hometown support for him was overwhelming.

Deanda's night not only ended in celebratory fashion with a win, the boxer also proposed to his girlfriend, Bree Adams, after the victory in the ring.

"She's been a great inspiration for my career. She comes to all my sparring, all my fights; ties my gloves and wipes my blood up," Deanda said.

"She's there for me and I want her to be there for the rest of my life."

If Amherst’s Wing-T offense wasn’t going to methodically wear down Orange County’s defense, it was going to be the fresh ball carriers the Lan…

In Amherst, Heritage and the Lancers traded scores in the first quarter and early in the second. Then Hov Bateman and Rajan Booker took over f…

Austin Deanda (red trunks) squares off with Chris Rollins in the middle of the ring during a Nov. 19 fight at the Boonsboro Ruritan Club.

Austin Deanda and his trainer, Scott "Cujo" Sigmon talk in between rounds during a Nov. 19 fight at the Boonsboro Ruritan Club.

Austin Deanda and his fiancee, Bree Adams, after Deanda proposed following his unanimous decision victory over Chris Rollins on Nov. 19 at the Boonsboro Ruritan Club.