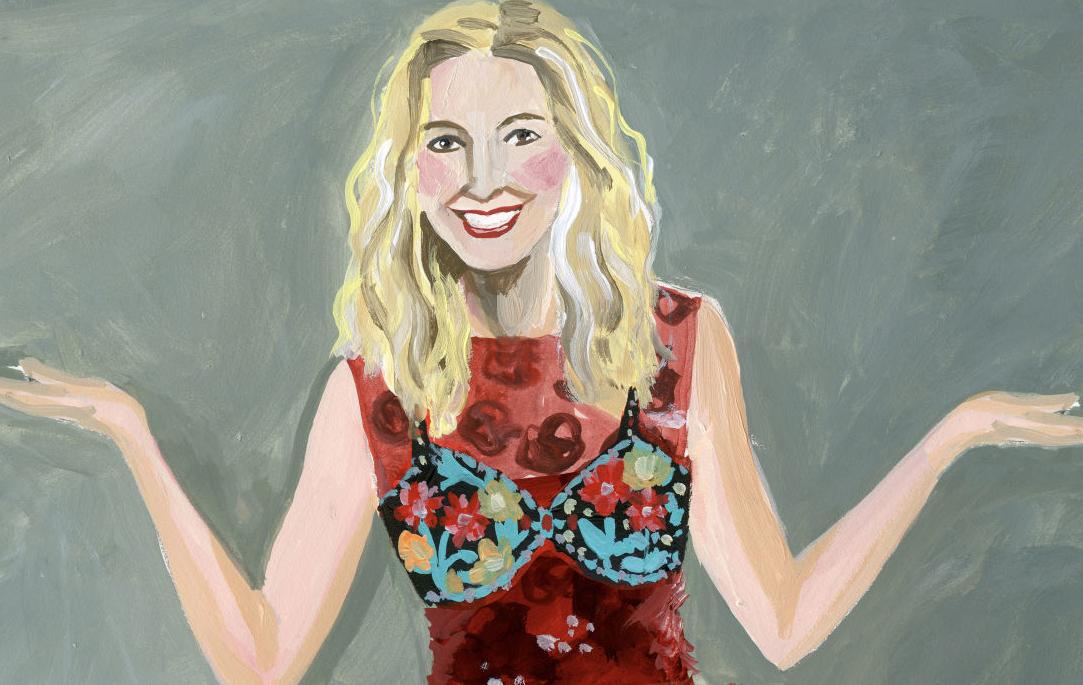 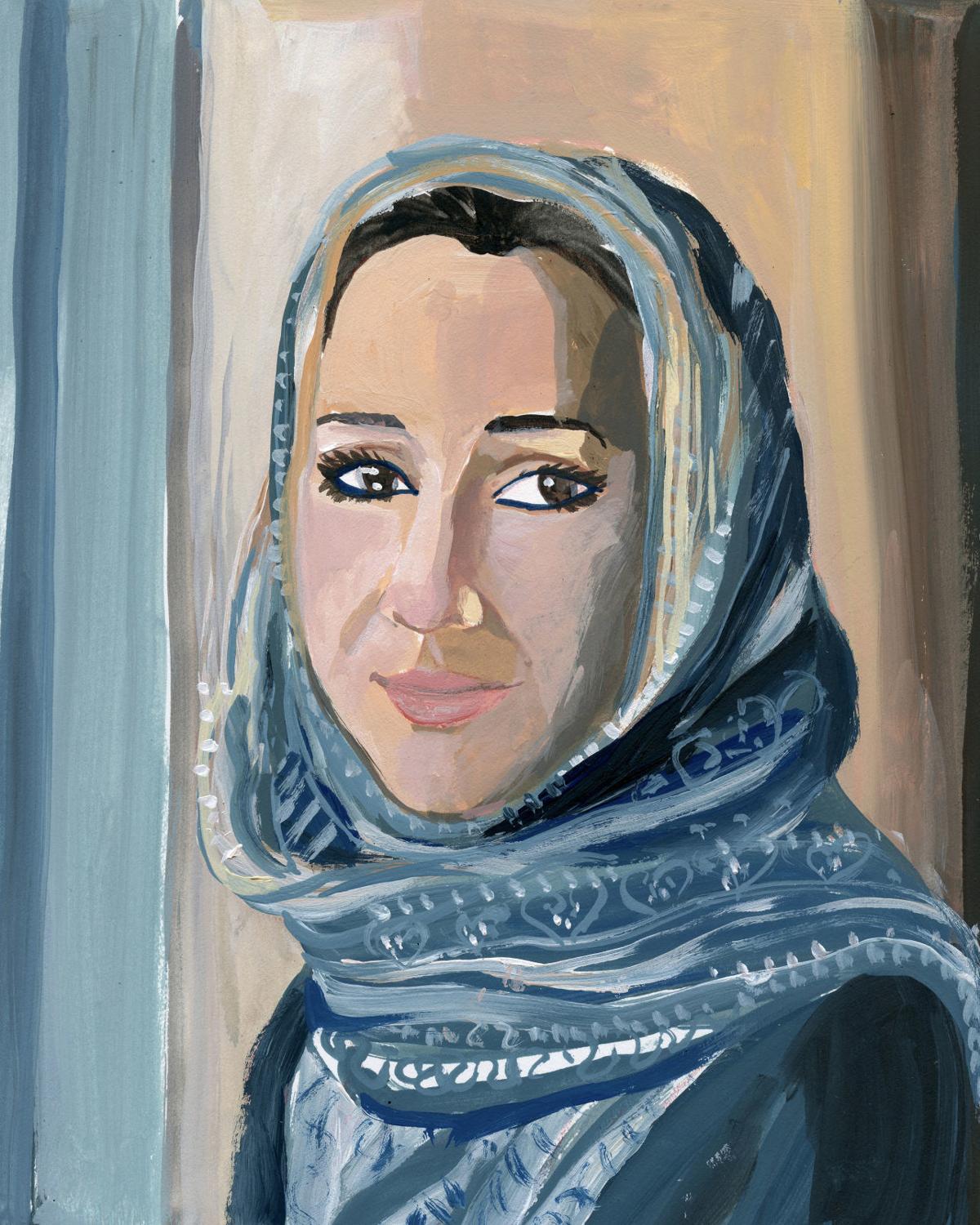 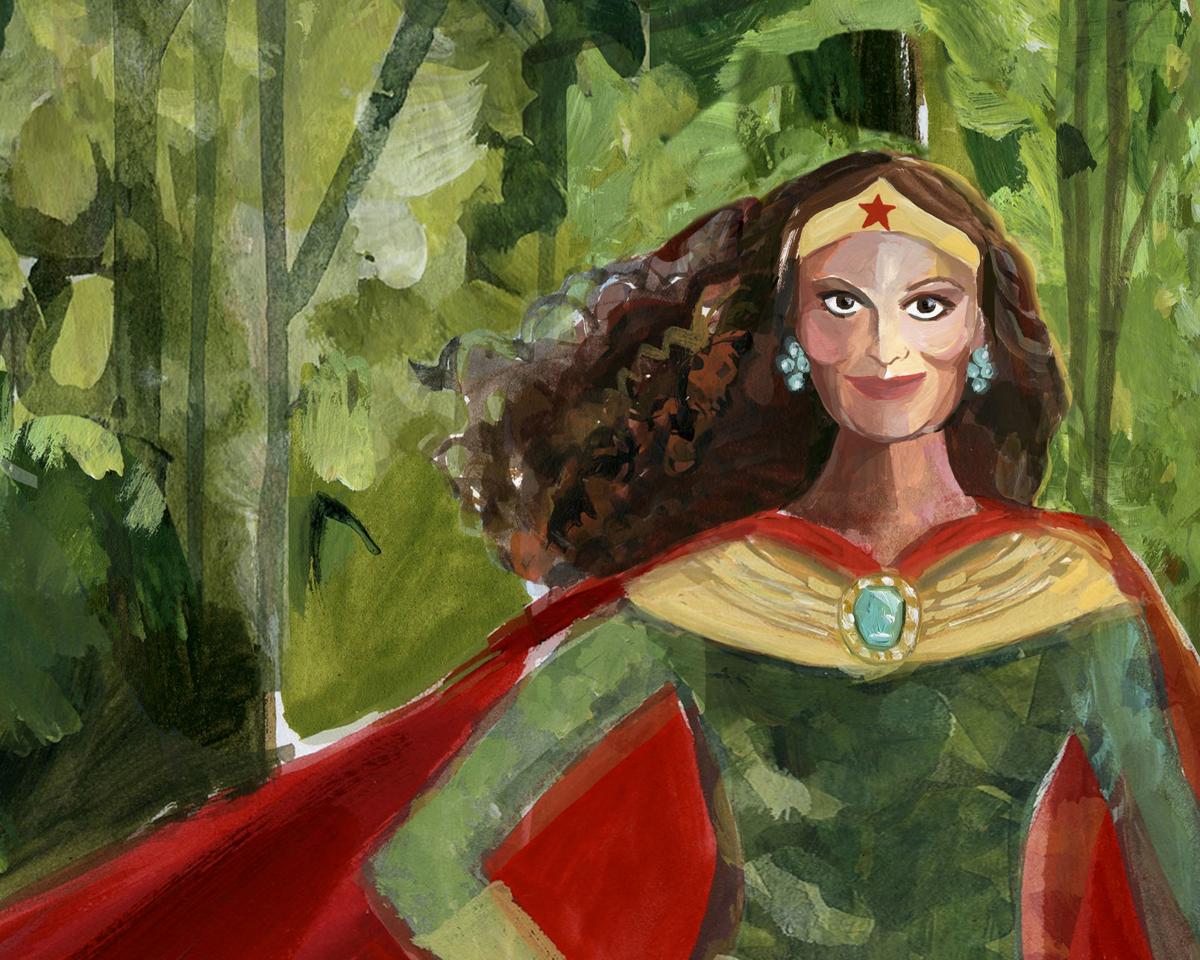 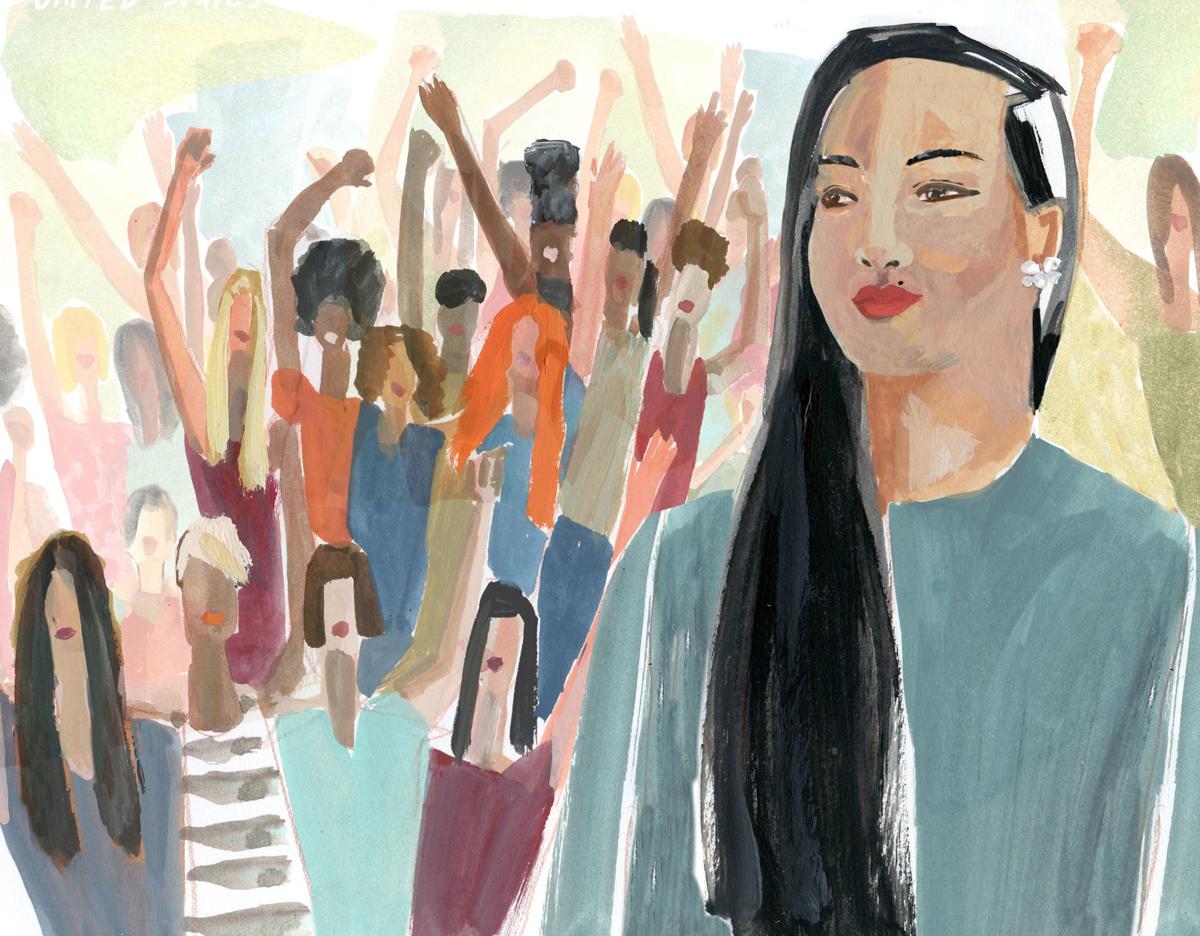 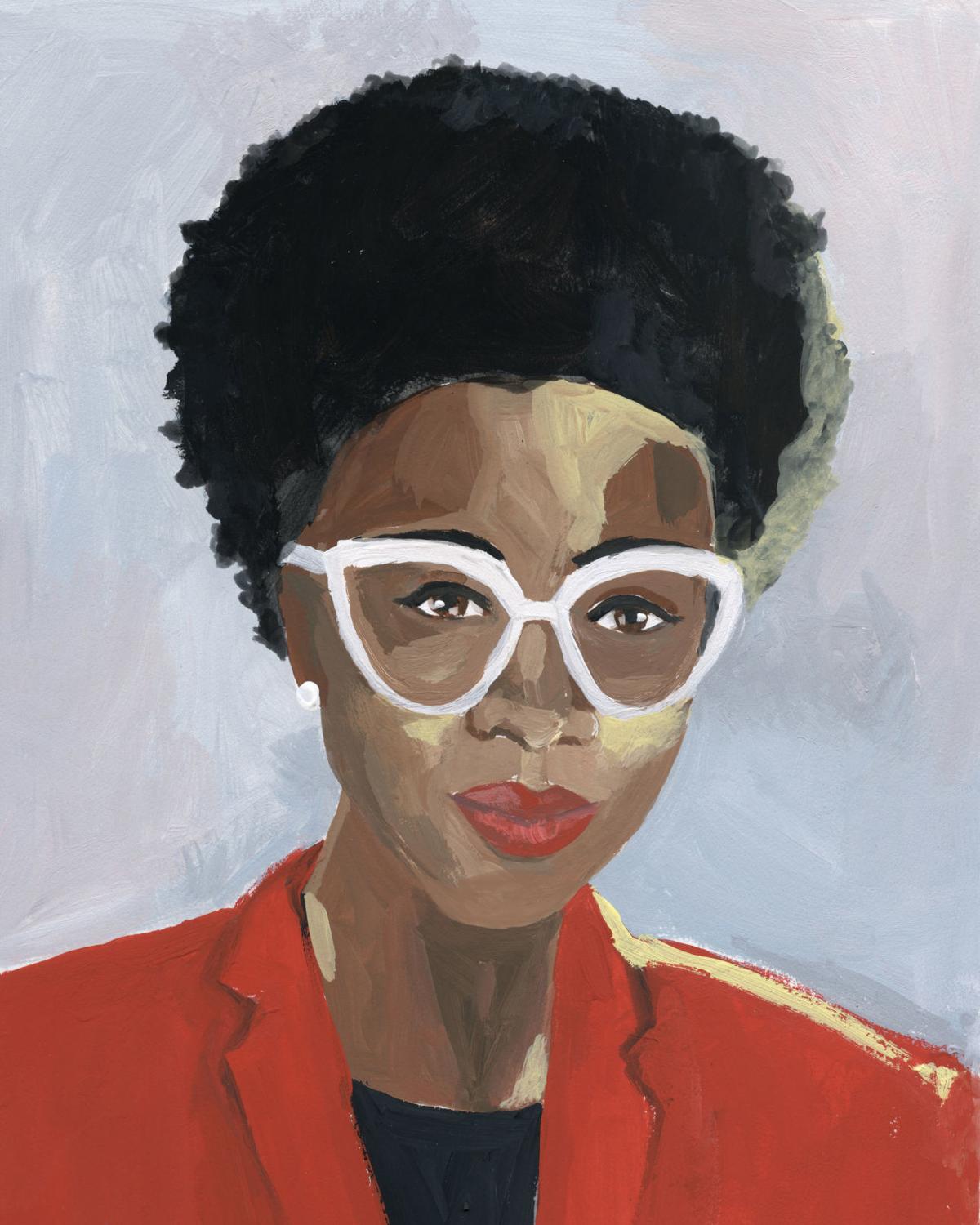 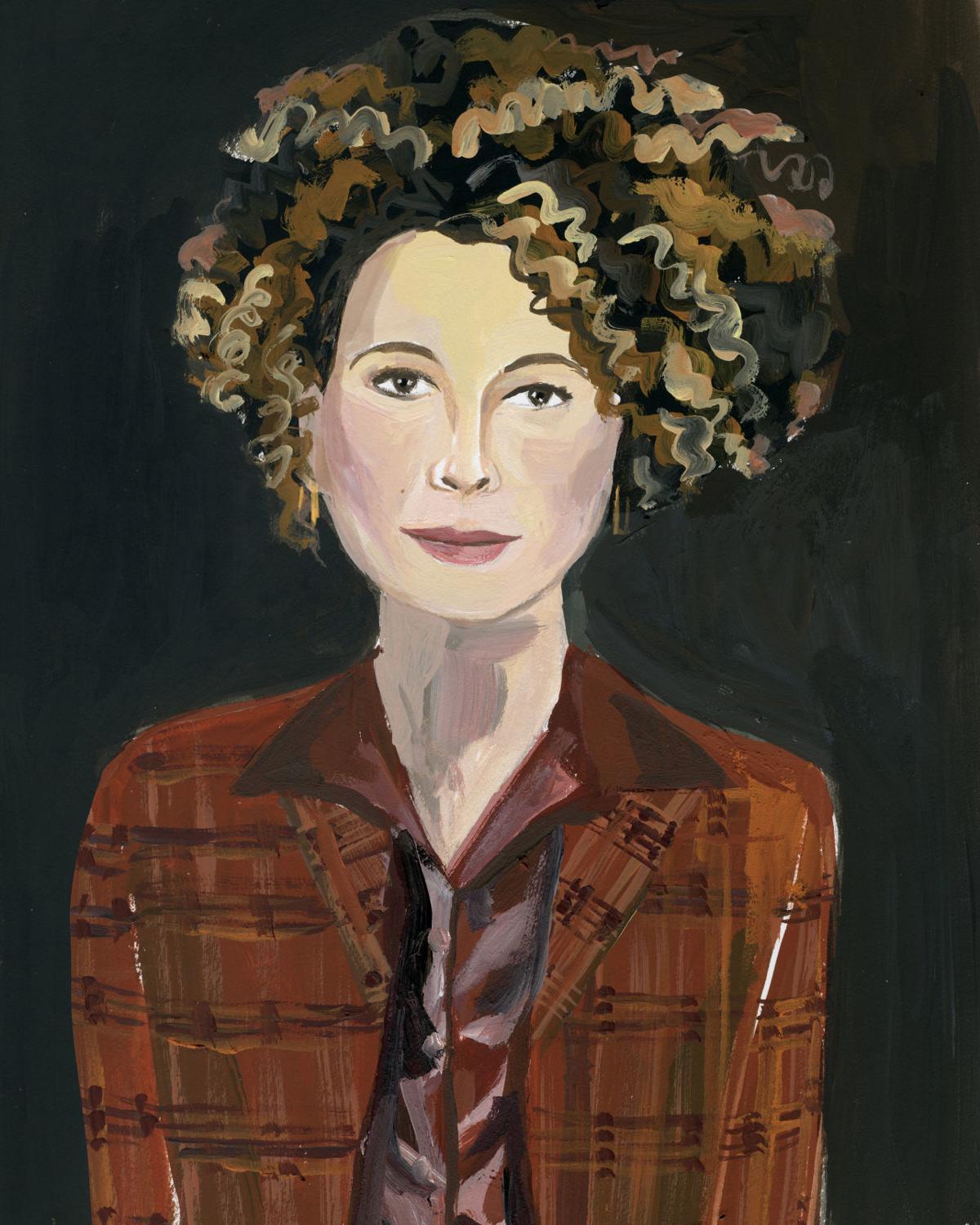 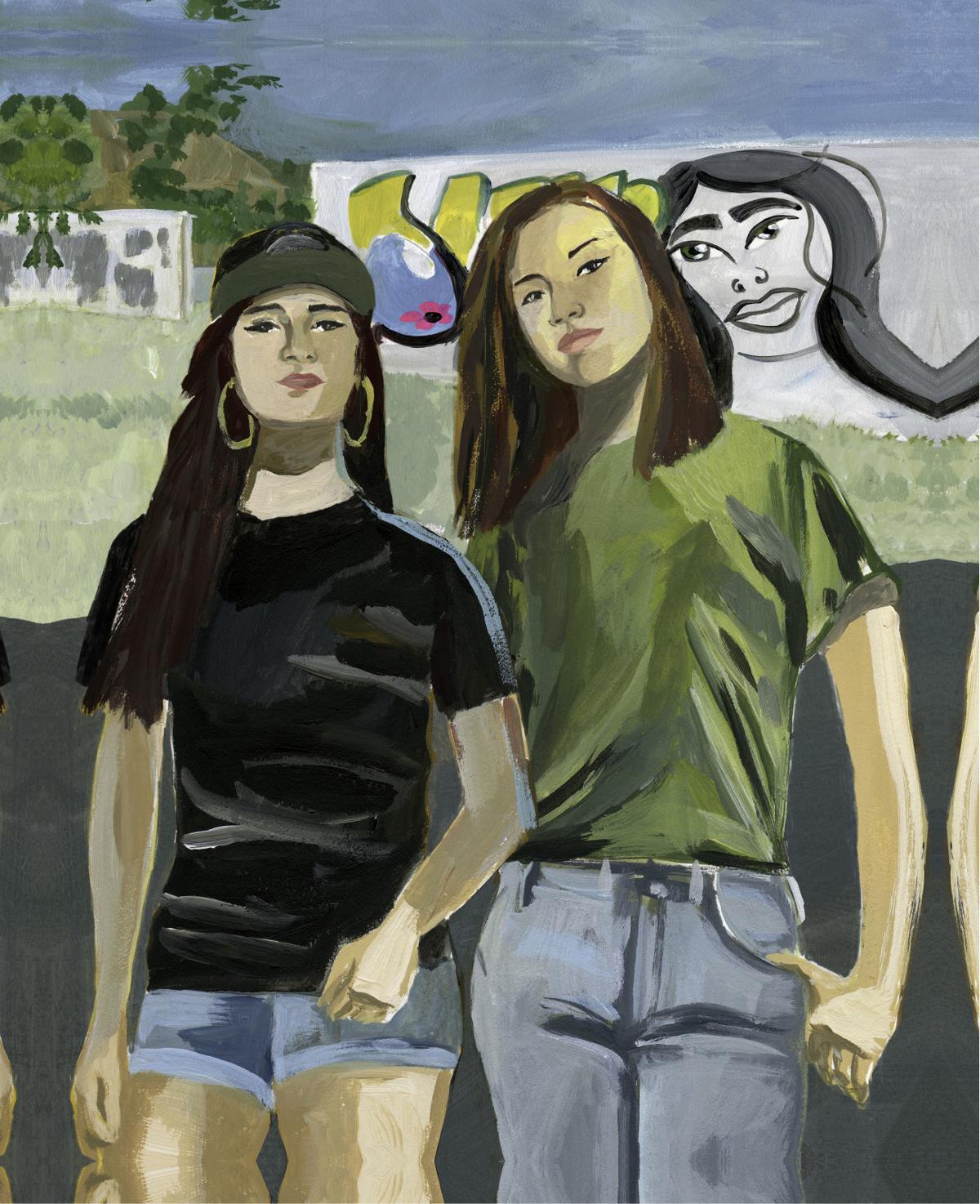 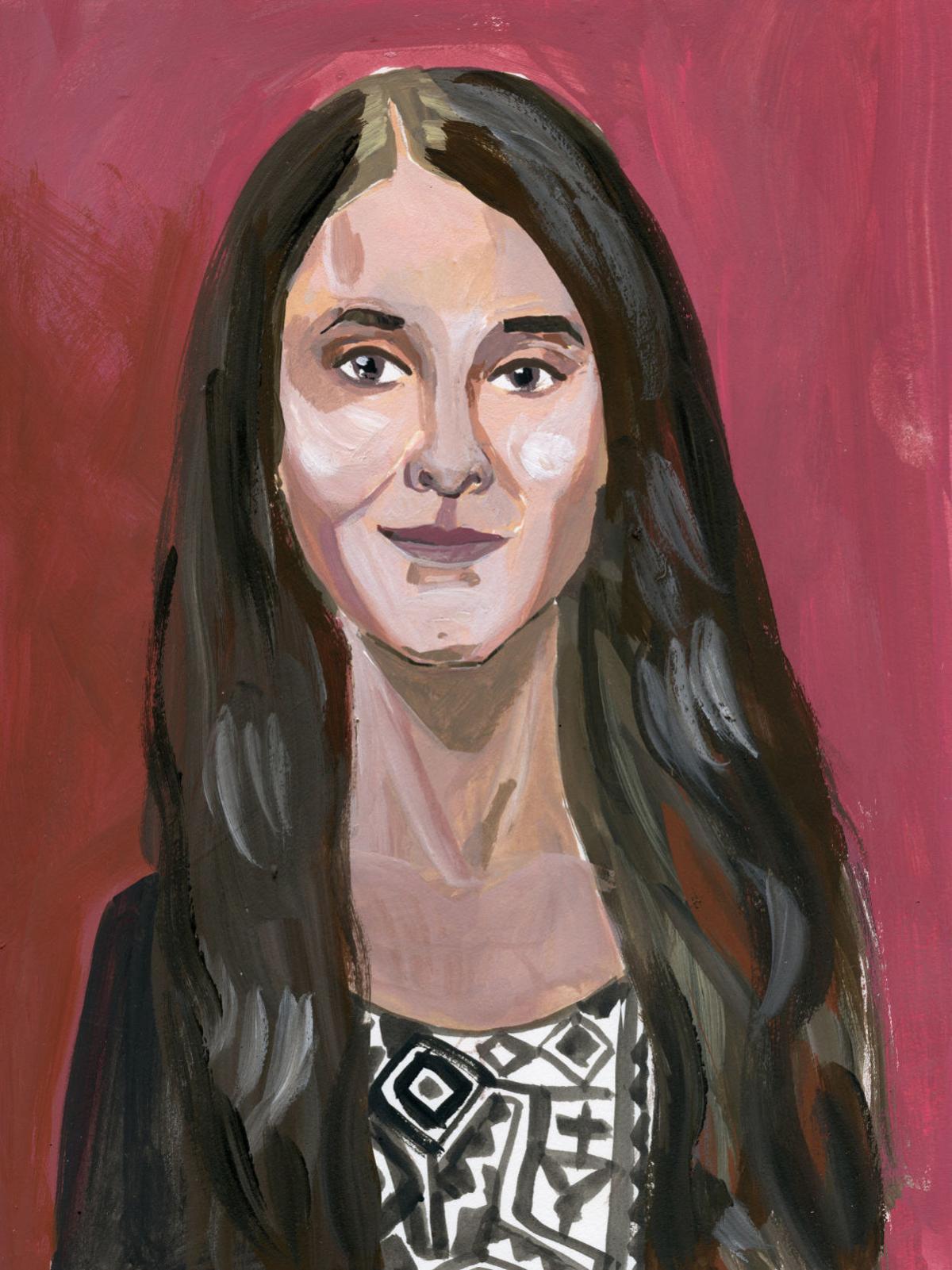 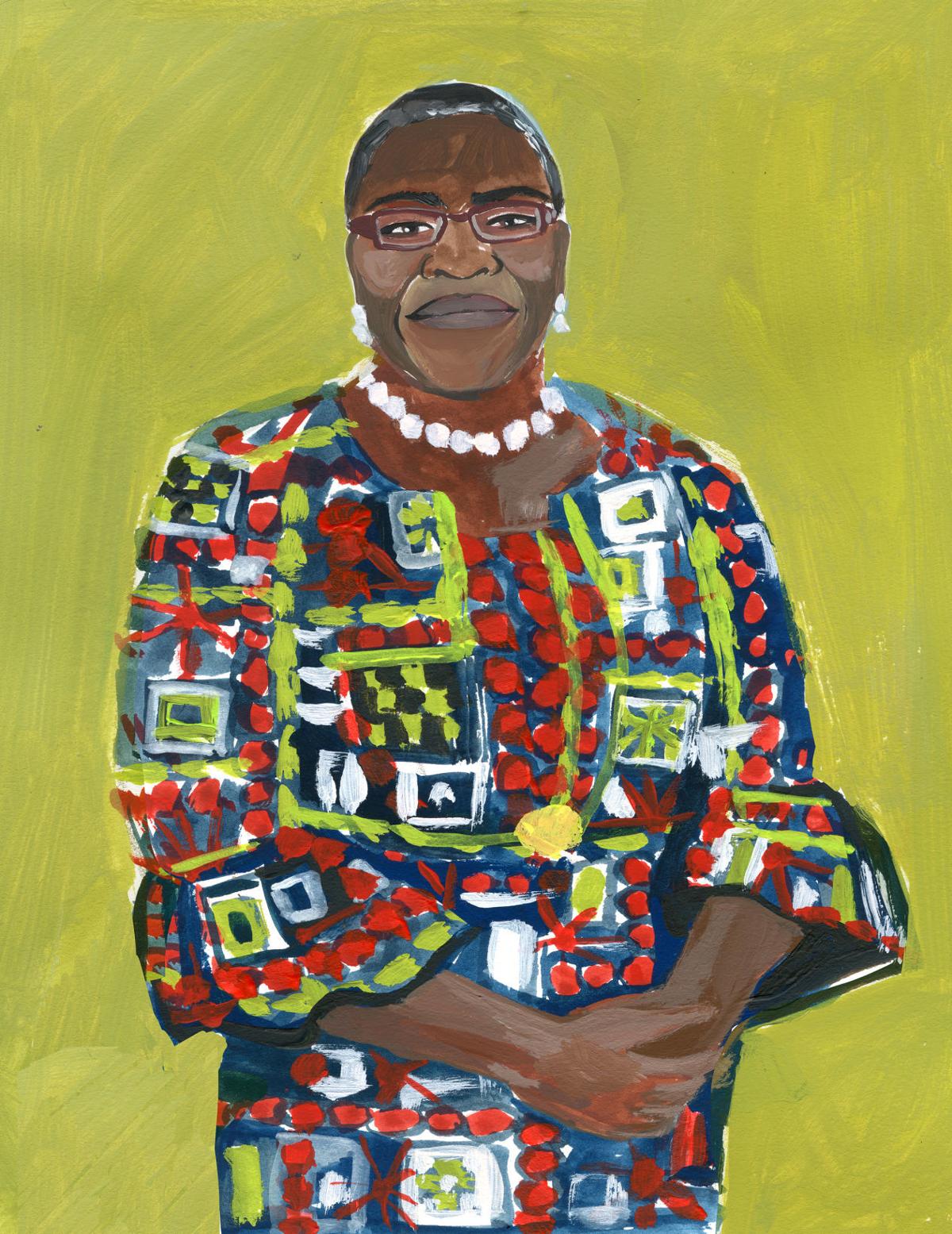 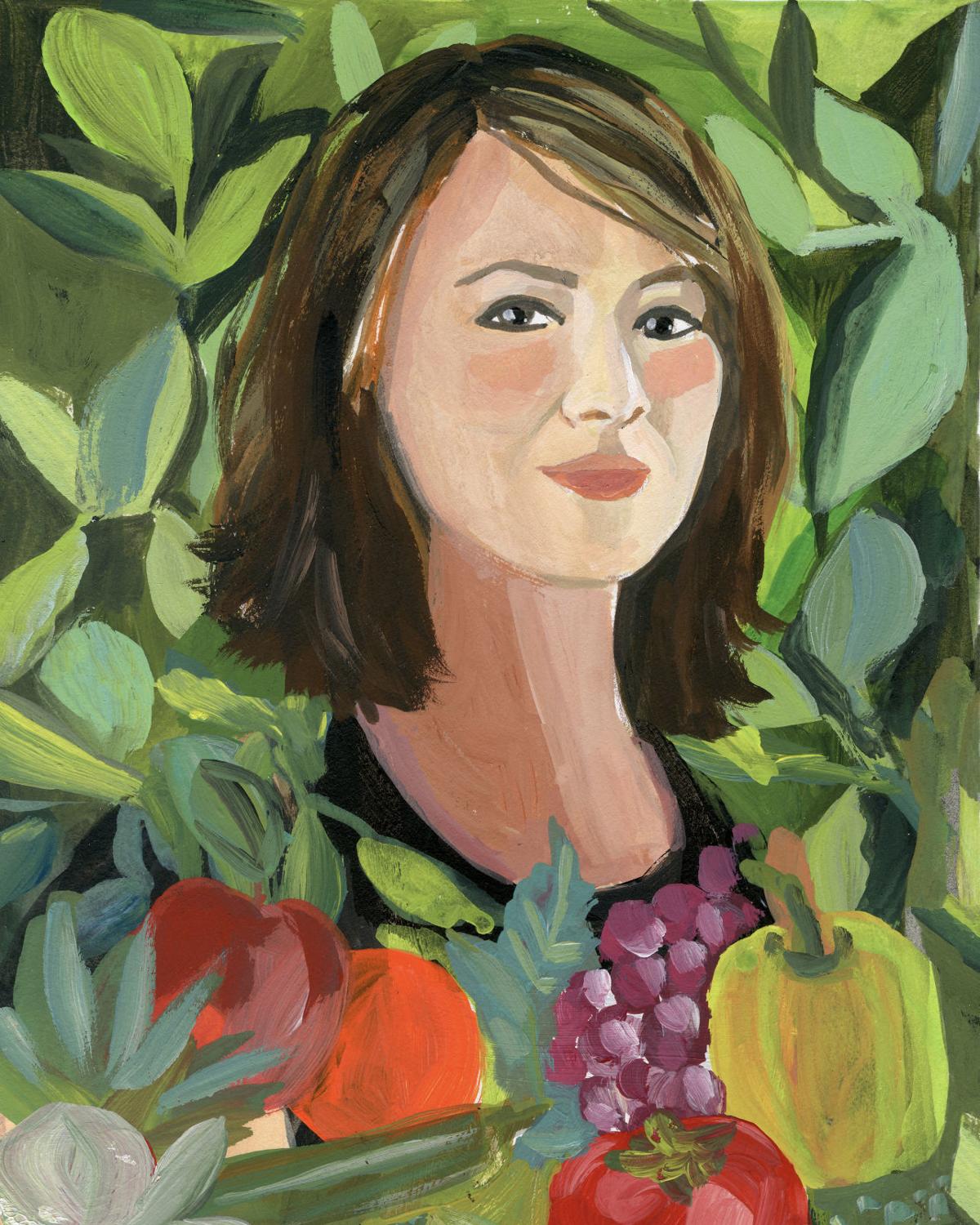 Artist Gayle Kabaker has been making colorful, vivid illustrations for more than 35 years - several gracing the cover of the New Yorker magazine. But never before had she painted 100 portraits in less than a year.

In 2019, Kabaker, 60, was asked by Vital Voices Global Partners, an international nonprofit organization that champions female leaders around the world, to help recognize dozens of them for their social, economic, cultural and political achievements.

Kabaker didn't hesitate for a moment.

"(Vital Voices co-founder) Alyse (Nelson) called me to talk about the project, and I could tell she was slowly getting to the idea of me doing all 100," Kabaker said in an email. "I think I stopped her when she was explaining it to say, 'You can stop now. I am in.' It was kind of like a 'You had me at hello' moment."

Kabaker's work culminated in "Vital Voices: 100 Women Using their Power to Empower," an exhibit on view at Washington, D.C.'s Kennedy Center in the Hall of Nations from March 8-21. And on March 11, six of those women - Joy Buolamwini, Obiageli Ezekwesili, Nadia Murad, Leah Lizarondo, Mayki Graff and Suam Fonseca - will be honored at the 2020 Vital Voices Global Leadership Awards at the arts center.

"2020 is a special anniversary year for women in this country and around the world. We wanted to do something special that we had never done before - celebrating how far women have come while inspiring the next generation," said Nelson, president and chief executive of Vital Voices. "It was important to include both women who are household names and those unsung heroines in the front lines of change."

Kabaker began the project in May 2019 and finished the portraits this February.

"I was thrilled. Excited. Scared at how many had to be done within a very tight timeline," she said. "I knew that I'd have to be super careful with my time. No social plans! It was painting, exercising, jogging with my dog, making healthy food. ... I tried to keep life as simple as possible."

Kabaker researched all of the women and got ideas from Nelson, but she would often procrastinate before starting a portrait.

"I was scared. But once I got into the flow, I was OK," she said. "I'd often meditate before starting - to be guided to capture each woman's essence in a way that (Alyse and I would) both be happy with.

"Painting such a wide range of women of all ages, from all over the world and 'getting to know' each of these amazing, strong, brave women by reading about them and studying their faces carefully from photos in order to catch their likeness in a painting has felt like such a privilege," Kabaker added. "It's been quite an education. Sometimes uplifting and exciting, other times really painful to realize the tragedies in these women's lives that led them to become activists."

Here are 10 of Kabaker's 100 portraits, along with her thoughts about creating each one.

Joy Buolamwini, a Ghanaian American born in Canada and raised in Mississippi, is a computer scientist, poet and digital activist. She is the founder of the Algorithmic Justice League, which uses art and research to expose racial and gender bias in artificial intelligence technologies.

Kabaker: "Joy was one of the last (and quickest) portraits I painted so I was really warmed up. Her glasses and hair were just so much fun - she was one of the easiest to capture. She's a disrupter but one with confidence and creativity. When I look at this painting I feel, 'Yeah. I got her.'"

Nigerian-born Obiageli Ezekwesili was one of the first to speak out with #BringBackOurGirls when Boko Haram kidnapped 276 girls in the town of Chibok in 2014. She is a pro-democracy activist and co-founder of Transparency International, an anti-corruption institution. In 2019, she ran for president of Nigeria - as the only female candidate. She withdrew her candidacy but has continued to help change the political culture of her country and Africa.

Kabaker: "Oby has wonderful distinctive features. I looked at many photos of her and feel I captured her strength. I created the pattern on her dress based on one of her outfits. Patterns are simply just fun for me to paint. I paint each woman's clothing in a way I'm confident it captures their style."

A native of the United Kingdom and now living in Los Angeles, Dame Donna Langley has been the chairman of Universal Filmed Entertainment Group since 2013. She is the creative strategist behind the "Fast and Furious" and "Bourne" movies, as well as "Pitch Perfect," "Mamma Mia" and "The Danish Girl," among many others. She is an ambassador for the Vital Voices Global Ambassadors Program and also serves on the Vital Voices Board of Directors.

Kabaker: "I painted Donna twice. When I was almost finished with all of (the paintings), Alyse asked if I had time to 'revisit' Donna as she didn't think I'd quite gotten her. Once I started looking at more photos of Donna, I had to agree. I knew I could do better, so I completely repainted her - and I just loved how she came out. Now it really feels like her. She's one of my favorites."

Leah Lizarondo, co-founder of 412 Food Rescue, is on a mission to end hunger and reduce environmental damage caused by food waste. Born and raised in the Philippines, Lizarondo now lives in Pittsburgh, where she helped create an app that keeps leftover food from ending up in the trash. 412 Food Rescue has more than 10,000 volunteer drivers in six North American cities, and Lizarondo hopes to create a global movement that reaches 100 cities by 2030.

Kabaker: "Since Leah's company was about distributing food to people, it was fun to incorporate an abstract background of fruits and veggies. On some of the portraits, adding some kind of background related to the work made obvious sense. But I had to be careful with my time as adding backgrounds often takes longer, and until I could see the light at the end, I was trying to be mindful of keeping to a schedule."

In 2014, Nadia Murad, an Iraqi Yazidi, and thousands of other Yazidi women were kidnapped by the Islamic State in Iraq, and several members of Murad's family were killed. She is now a human rights activist, founding Nadia's Initiative, a nonprofit organization that advocates for survivors of sexual violence. In 2018, Murad was jointly awarded the Nobel Peace Prize for her work with survivors of genocide and sexual violence.

Kabaker: "Nadia's story is very intense, and it took me a bit to capture her. She is strong. I wanted it to be serious - but also, she has a beautiful smile. I must have seen her wearing a pattern like this as I'd never just do a random pattern. The red background felt right for her."

Honduran graffiti artists Mayki Ortega and Suam Fonseca, of Dolls Clan, claim to be that country's first feminist graffiti artist duo. Since 2014, the pair have used their art to promote gender equality in a country known for high rates of femicide and strict laws on reproductive rights. Both in their 20s, Ortega and Fonseca are dedicated to changing the culture of fear that they grew up with.

Kabaker: "It's a bit intimidating to paint other artists. I had a great photo of them with a cool background, but when I was close to finishing, it didn't feel quite urban enough. The filmmaker Michael Marantz, whose company creates the short films on each Vital Voices honoree, sent me an image with the wall in it. Painting two people is always harder - I might nail one then struggle with another."

In 2012, Forbes magazine named Sara Blakely as the youngest self-made female billionaire in the world. Blakely, who used to sell fax machines door to door, is the founder and owner of Spanx, which sells undergarments, leggings and swimwear in 65 countries. Blakely, who says her deeper purpose is to empower women through entrepreneurship, education and the arts, is working with Vital Voices on a center for women's entrepreneurship. It is scheduled to open in 2021 just blocks from the White House.

Kabaker: "I knew Spanx, but I didn't know much about Sara before starting to research her for this project. She is a blast to follow on Instagram, and she was super fun to paint. (I gave Sara) a bra outside her dress; I wanted to capture her goofy, playful side. I began my career as a fashion illustrator, so when I look at her painting, it feels like a fun fashion illustration."

In 2011, Manal al-Sharif was filmed while driving in Saudi Arabia, which, at the time, banned women from driving. The video went viral, and from there, al-Sharif started a campaign to help Saudi women learn to drive. She is an activist for Middle East and North African human rights, an author and a computer scientist, and in 2012 was honored with the Vital Voices Global Leadership Award - the Global Trailblazer.

Kabaker: "I was lucky to have an amazing photo of Manal by Aaron Kisner, a longtime creative collaborator with Vital Voices. The colors, her look, the light, everything was already there. I just had to reinterpret it. I used the gorgeous blues of the photo to guide me for the blue. I remember how effortlessly it seemed to paint itself, and I was so happy with it when I was done."

New Yorker Diane von Furstenberg is a Belgian fashion designer best known for her wrap dress. Von Furstenberg, who says she seeks to use her voice, brand and philanthropy to lift up and mentor women around the world, is the chairwoman of Vital Voices' Go Bold Campaign. In 2010, she founded the DVF Awards with her husband, Barry Diller, to honor and provide resources to individuals who work on women's causes, including Anita Hill and Jane Goodall. In 2019, she was awarded Vital Voices' Global Trailblazer.

Kabaker: "My first idea for Diane was more a fashion portrait in a wrap dress. It was Alyse's idea to make her a superhero. I read Diane's memoir and learned that nature was really important and inspiring to her, and that's why I painted her in the woods. I love painting women as superheroes!"

Amanda Nguyen, a 2019 Nobel Peace Prize nominee, is an advocate for sexual assault victims. After an attack at 21, she discovered that Massachusetts state law allowed rape kits to be destroyed after six months, even if the assailant had not been found. In 2014, Nguyen founded Rise, a nonprofit group that helped get the federal Sexual Assault Survivors' Bill of Rights signed into law.

Kabaker: "Amanda has been so successful getting laws passed for rape victims and I wanted to show victorious women with her. I wanted to paint her super strong and confident. Plus, she's so gorgeous!"

Podcast invites community for coffee with curators of Riverviews Artspace

Riverviews Artspace in Lynchburg is branching out to a new medium for connecting with its community: a podcast called “Coffee with Curators.”