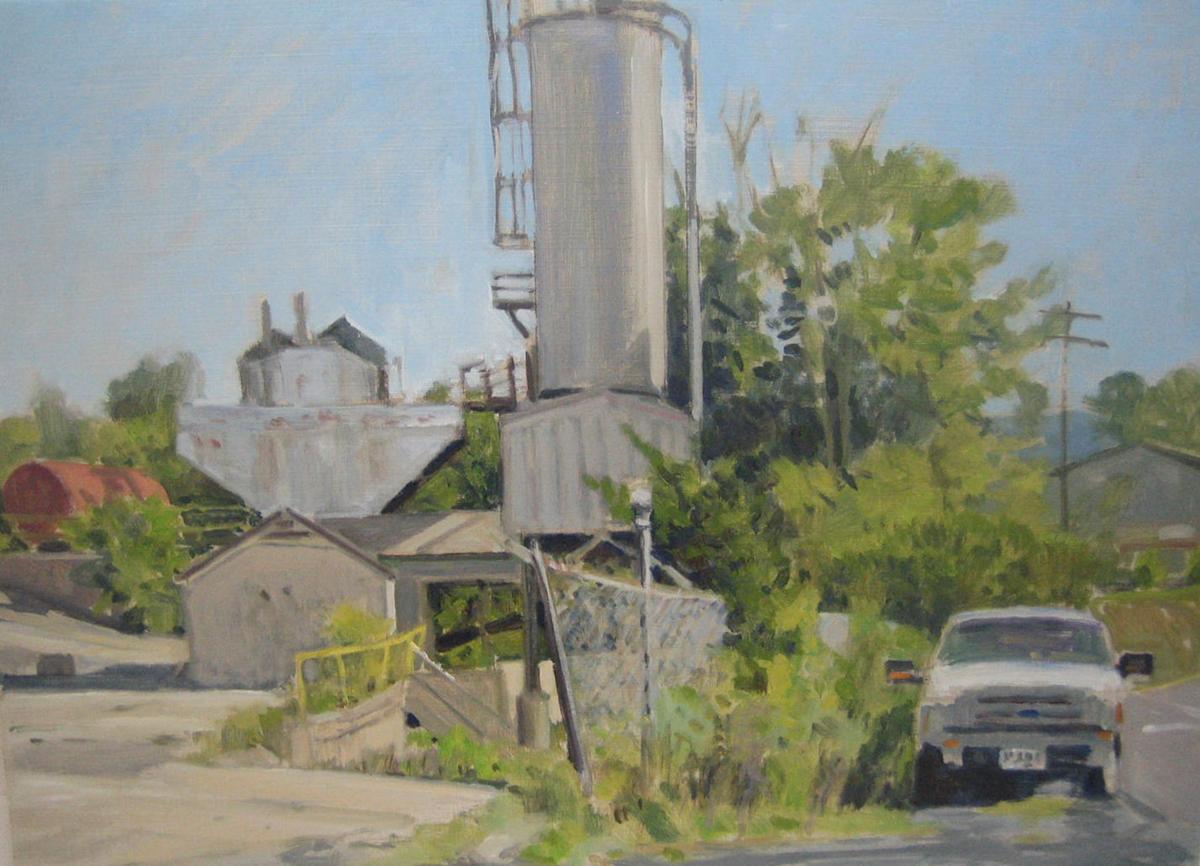 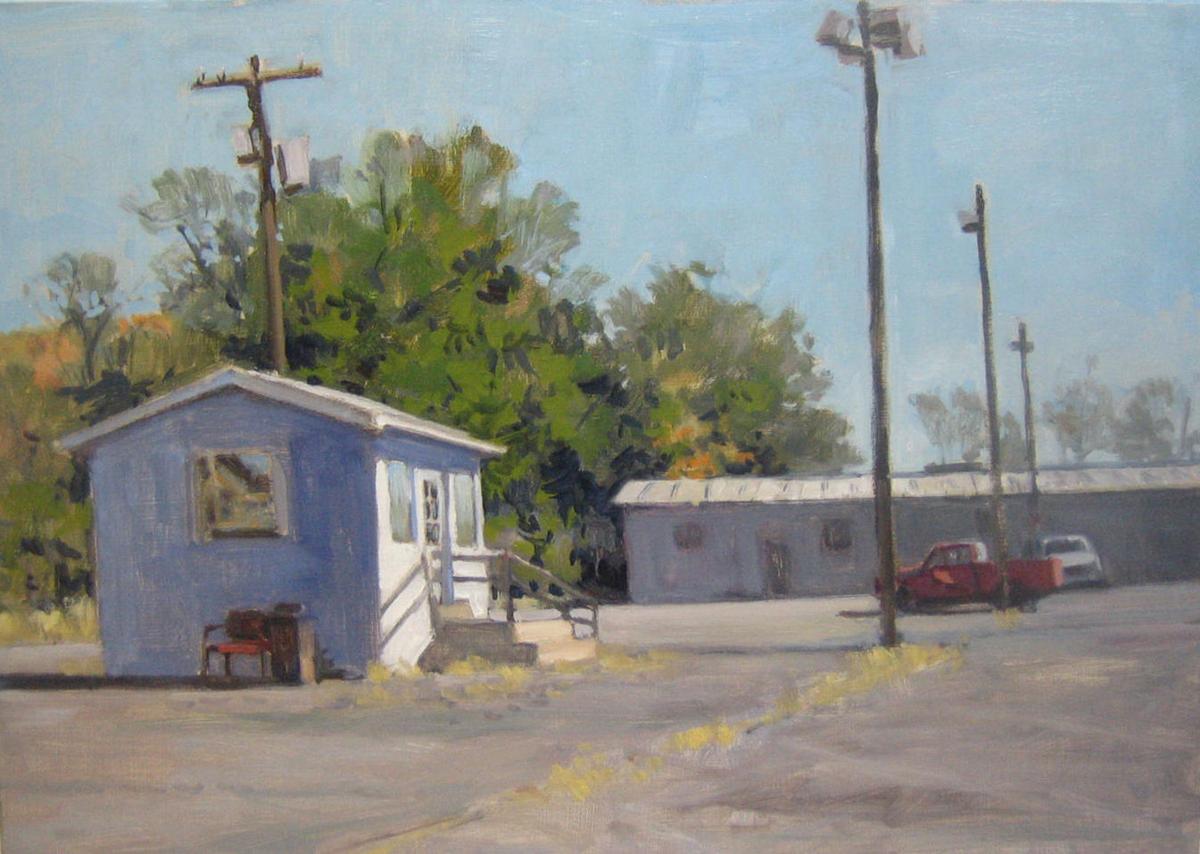 Why you should know him: The Charlottesville artist is currently showing his work at Sweet Briar College in the exhibit “Landscapes in Transition.”

Richard Crozier has made a career of painting landscapes out of his car.

He doesn’t paint from photographs, and he rarely sketches and then returns to his studio to paint. Instead, the artist parks his vehicle, climbs into the passenger seat, props his easel against the dashboard and paints on the spot, with his inspiration directly before him.

Crozier counts his time in undergrad at The University of Washington in Seattle as the true beginning of his art career, although he did take a watercolor class around the age of 11.

His parents wanted him to study science, but his grades quickly revealed that would not happen. During his time at UW, the Hawaii native went from studying science to graphic design before he eventually settled on painting.

Crozier then pursed his MFA in abstract painting from the University of California, Davis, where he studied with the likes of William T. Wiley, Roy De Forest and Wayne Thiebaud. Almost immediately after receiving his degree, he accepted a teaching post at the University of Virginia, where he remained until he retired in 2011 after 37 years of teaching.

Since he began painting, Crozier has created more than 4,000 works of art.

During his career, the retired teacher moved from abstract art to landscapes. But his landscapes are not what you’d typically expect.

Crozier says that his art dealer used to refer to them as paintings of “dirt piles and dumpsters.”

Featuring everything from abandoned lots and tree stumps to fields and construction sites, the artist paints the areas he knows best — that of Charlottesville, Crozet, Waynesboro and the surrounding counties.

“I kind of like things when they’re in process,” he says, “like the colors and the kind of chaos and the kind of junkiness of it all. It seems kind of challenging to paint, for one thing, and [it’s] a look at something [that] is going to look different in a few years.”

The former teacher often finds inspiration in more than just the space itself; it’s the questions he finds himself asking about the area — about its past and its future — that draw him toward these less than traditional landscapes.

“What happened here? What was this place? What’s it going to become?” he says. “I like the way that you see nature pushing back.”

Crozier’s collection at Sweet Briar College features paintings from 2006 through 2014, a small portion of what he refers to as his visual diary.

“I’ve got heaps and heaps of these things at home. I try to get out everyday … and [the paintings], they do form a kind of diary — today I went here and I painted this.”

When he moved to Virginia in 1974, the artist wanted to paint 100 different views of Charlottesville, like Hiroshige’s “36 Views of Mount Fuji,” he adds.

“I’ll often go and drive around early in the morning, and just go look the city over … but often on those trips I’ll say, ‘I want to come back here this afternoon, see what the light looks like on that in a couple hours.’ Things like that.”

The most difficult part of these trips, Crozier explains, is returning to find that his inspiration has been torn down in his absence.

“There was one place I’d always admired for a long time on probably one of the worst corners in Charlottesville, [it was] an old house that leaned probably five degrees … and people lived in it,” he says. “So I finally got my nerve up to park on the street there … and as I was painting, this thing, this big yellow machine, rolls up to the house and goes, ‘Burrh’ [gestures knocking down a wall].

“The interior of the house was painted the most iridescent pink I’ve ever seen in my life,” he adds. “… It looked like it cracked an egg or something.”

Crozier’s paintings have a mysterious quality about them. When farther away, they look almost like photographs, sharp and clear with vibrant color and exquisite detail. As you approach, the soft brush strokes of oil on canvas become more pronounced and the image itself becomes fuzzier.

“I do like that they come into focus,” he says. “I had a student at one point, who was a very good mimic, and he called me up one Sunday — people were addicted to prank calls — and he said, ‘Mr. Crozier, my name is so-and-so and I was wondering, do you give art lessons? I want to take art lessons from you — I want to learn to paint all fuzzy like you do!’”

“The job I had before I went off to graduate school — I was desperate to earn some money, and a friend of mine told me about a company, Jonas Brothers, which was looking for an artist .... It turned out they were a company that did taxidermy. It wasn’t what I had in mind, but I got the job, and I spent about six months pounding rubber tongues and bear skin rugs. Puttying little bullet holes and painting them to look happy — [I] painted up their lips and curled their tinted hair.  I was very happy to leave that one.”

On earning his masters at U.C. Davis:

“It was during the days where a lot of the faculty they had didn’t really think of themselves as teachers, they were just artists who had found the gravy train. They gave you a studio and said, ‘Make some art, we’ll come back in about six months and see what you did.’ … And then they’d show up in six months and stand in your studio and they’d say utterly contradictory and incomprehensible things and then go away. And in two years they say, ‘OK, you can graduate.’”

On getting the job at UVa:

“I’d just graduated … and I was walking past the chairman’s office, and he stuck his head out and said, ‘Dick Crozier, you want a job?’ And I said, ‘Sure …’ — I thought he meant mow his lawn or something like that — and he handed me the phone and said ‘Talk to this guy.’ [It was] the chairman of the art department at UVa. Someone had resigned about three days before classes were supposed to start, and they called a couple of schools around the country and asked if they had somebody who could come.

“It’s really kind of tough, because everybody sees things differently. You have to approach somebody a bit gingerly, and to try not to be too full of yourself and think that you know all the answers. … I think to try to encourage people and say, ‘Make more of it.’ Someone made the remark that behind every successful artist are acres of ruined canvas. I think people try something and say, ‘This doesn’t work.’ … A lot of the teaching I did was getting people over the hurdle.”

What: ‘Richard Crozier: Landscapes in Transition’

When: Open now through March 25