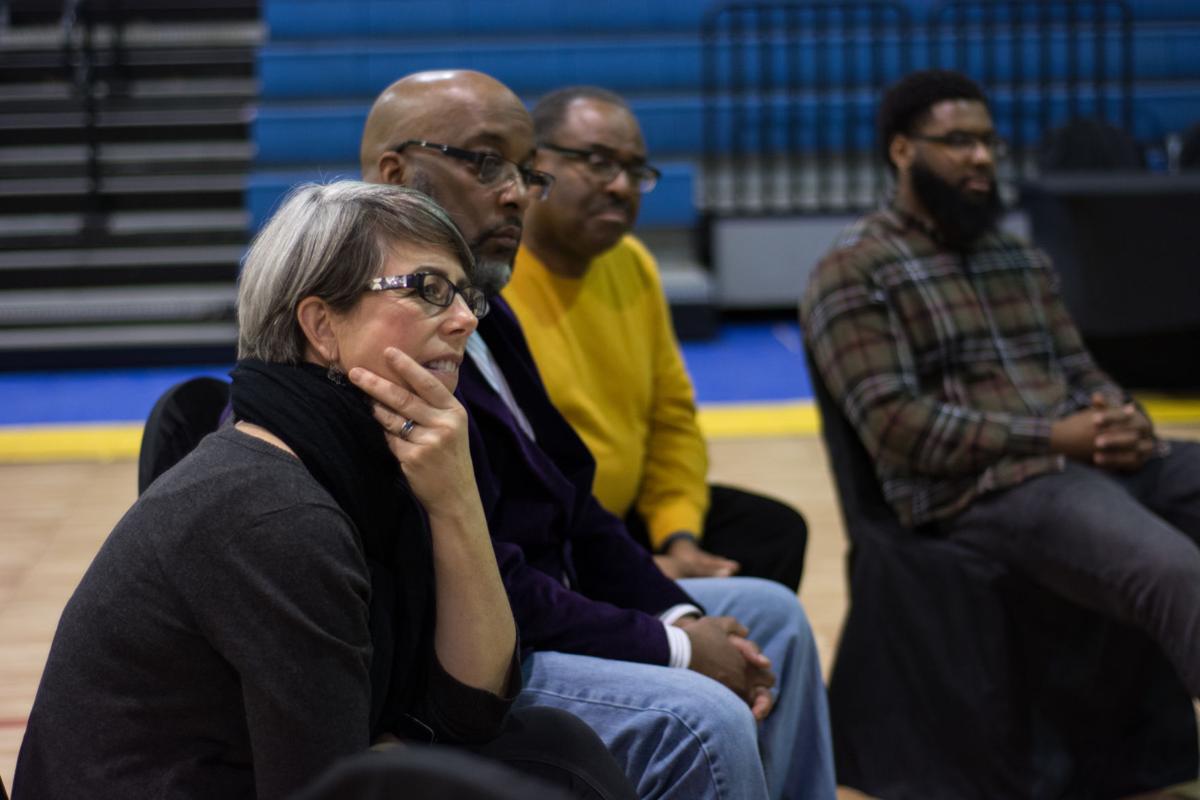 Singer Kay B. Rose performing at an open mic session by The Listening, Inc. Photo by Larry Taylor Jr. 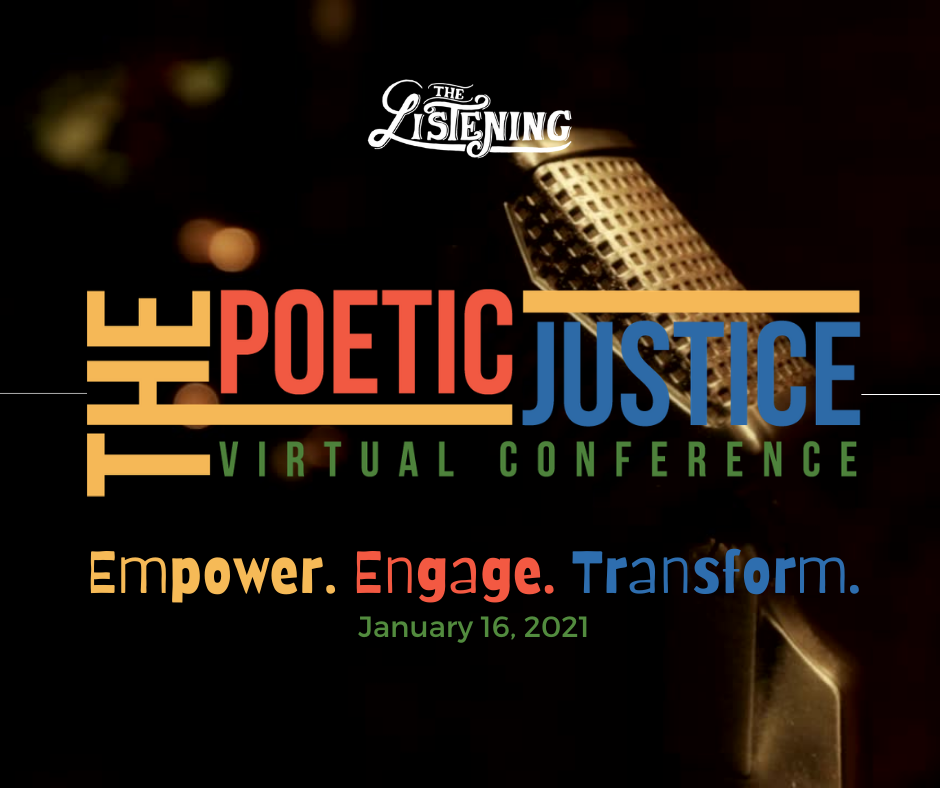 In times when genuine listening and productive dialogue between those holding different opinions often seems a lost art, The Listening, Inc., organization founder and poet Nick George pursued the mission laid on his heart: using performing arts as something more than entertainment.

The Listening, Inc., a nonprofit organization, was launched between 2012 and 2013 aiming to form a community where performing arts meets social justice, advocacy, education and youth mentoring.

Artists intentionally engage with their craft to address what they see and experience in the world they live in, and use their platform for communication, reaching understanding, processing and solution seeking.

The inaugural Poetic Justice conference is the latest addition to pursuing that mission.

“Since our beginning, we wanted to find a way to bring people together locally, where they can have safe but bold conversations with each other, and be encouraged to actually hear where the other’s coming from,” said Nick George, founder of The Listening.

George said the conference name, “Poetic Justice,” was inspired by a 1993 movie of the same title.

“The emphasis of the film, in my opinion, is how it looked at the two lead characters who used their interest in the arts to process their life stories and life experiences,” he said. “I felt that that matched fairly directly with the mission of The Listening overall, which is to use the arts as a transformative resource beyond entertainment.”

Due to the novel coronavirus pandemic, the conference will be held virtually via Zoom on Saturday, Jan. 16. The event will feature over 20 individuals serving as speakers, panelists and performers both locally based and from across the United States.

For $35, registration for the conference can be made through The Listening’s website at: welcometothelistening.org.

The event is open to everyone, and may be of particular interest to those in the performing arts, activists, educators and mental health advocates. The conference’s focus is congruent with The Listening’s mission to “engage, change, and save lives with the performing arts.”

Keynote speaker Walter Virgil Jr. is no stranger to The Listening and its mission.

Virgil met George when The Listening, Inc., was only an idea, and he supported George as the organization became a reality.

Virgil’s background in community development and education, with a special passion for youth mentoring, were part of why George invited Virgil to speak at the conference.

“There’s so much more power connected to the various expressions of art than just for the sake of art. It has the ability to upwardly mobilize our culture,” Virgil said.

Virgil said one of his personal interests is showing how art of all kinds can be used to present abstract thoughts and ideas in a concrete, tangible form. Through his research, he said he has found using art this way helpful in communicating effectively with individuals from diverse backgrounds and belief or social systems.

While the year 2020 caused struggles for many artists and organizations, and brought a surge of social and racial justice movements embroiled in political polarization, Virgil said his talk will have nothing to do with politics.

“My assignment in operating as the keynote for this, it’s really more so to bring forth perspective, and be able to charge these influencers into utilizing their influence and their platforms to be able to make the most change now. How they interpret that, how that translates over into what their inspiration from this keynote leads to, it’s up to their creativity,” he said.

Virgil is also the vice president of business development at Evolving Solution Services; CEO of Get Fresh and Live, a nonprofit using programming for at-risk young men that aims to reduce mass incarceration rates among that population; owner of Walter Virgil and Associates, LLC, offering consultation in community development, crisis management and diversity equity inclusion; and is a board member of several local organizations and businesses.

Geoffrey Kershner, executive director of the Academy Center of the Arts in Lynchburg, will be a panelist at the conference for one of the discussions. The Academy and The Listening have collaborated in various ways previously, usually a few times a year.

“One of the things that I’ve always really appreciated about The Listening is, it’s responsive,” Kershner said. “I think when there is something happening, or there is something going on, the organization tends to respond. It tends to try to meet the moment in some sort of way. I think this is another chapter in the story of how they have worked to create a community for individual artists and provided a platform for artists to engage.”

George hopes to make the conference an annual event.

“Beyond entertainment, there’s something more that the arts can do,” he said. “There are ways art can be used in mental health facilities; in the classroom; in interpersonal relationship building; in community building; in addressing social justice issues; and so on and so forth. It can be part of the conversation.”

Larry King, the suspenders-sporting everyman who interviewed world leaders, movie stars and ordinary Joes for a half-century, died Saturday. He was 87.

LONDON (AP) — Albert Roux, the French-born chef and restaurateur who along with his late brother Michel had a profound influence on British dining habits, has died at 85.

Lil Nas X is truly a man of his generation. With this week’s release of his new children’s book, the social media-savvy, history-making Billboard chart-topper pleaded with fans to purchase “C is For Country” in order to pay his rent. “MY CHILDREN’S BOOK “C IS FOR COUNTRY” IS OUT NOW!!!! GO GET IT PLEASE I REALLY NEED TO PAY MY RENT!,” Lil Nas X tweeted Tuesday. Turns out that the hilarious ...

Dr. Dre says he will be "back home soon" after the music mogul received medical treatment at a Los Angeles hospital for a reported brain aneurysm.

Lady Gaga belted out the national anthem Wednesday in a very Gaga way — with flamboyance, fashion and passion. Watch her performance here.

Movies in a Minute: 'The Little Things'

Three actors who turned down a part in 'Star Wars'

Three actors who turned down a part in 'Star Wars'

What we know about 'Thor: Love and Thunder'

What we know about 'Thor: Love and Thunder'

Singer Kay B. Rose performing at an open mic session by The Listening, Inc. Photo by Larry Taylor Jr.