Subscribe
Read Today's E-edition
Share This
This Passover, as in the past, will be a time to recognize tragedies and offer hope for the future
0 Comments
Share this

Jewish families will gather for Passover this year in circumstances that will, like the celebration itself, reflect on dark times while holding out for better to come.

The holiday lasts from the evening of March 27 to the evening of April 4 in 2021. The first two nights of the celebration, March 27 and 28, require a Seder, a ritual meal bringing together the family.

As a scholar of the Bible and ancient Judaism, I believe Passover is a particularly poignant time to recognize the tragedies of the past year and offer hope for the future.

The Passover is a festival found in the Bible that commemorates the escape of the Israelites, led by Moses, from Egypt as recounted in the book of Exodus. Prior to the departure of the enslaved Israelites, God delivered a series of plagues on Egypt, culminating in the killing of the firstborn son in every Egyptian family, including the firstborn of the livestock.

The Israelites, however, place the blood of a lamb on their doorposts to signal that the “destroyer,” an angel responsible for the killing, should skip, or pass over, those homes.

This story came to function as a powerful narrative of persecution and liberation for Jewish people. The command to celebrate and remember the exodus from Egypt and the Passover for future generations is encoded in the Bible itself: according to the book of Exodus, God commands Moses, even prior to their departure from Egypt, that the Israelites and their descendants are to commemorate this event.

The celebration of the Passover includes a script, called the Passover Haggadah. The Haggadah contains ancient rituals, some of which may have been practiced as early as the second century A.D., though the full script exists in later, medieval manuscripts. 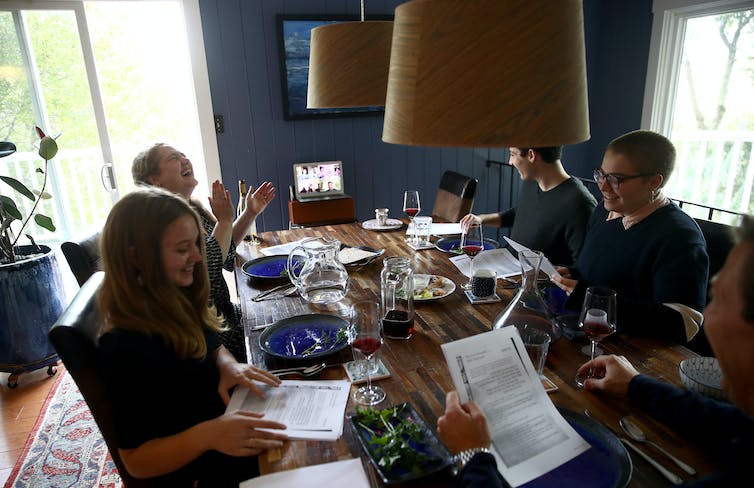 A Jewish family gathers in person and over video conferencing for Passover celebrations in 2020. Ezra Shaw/Getty Images

Story of the four sons

Today, many families also create their own versions of the Haggadah, offering celebrations of the Passover that infuse personal and family experiences.

Each member of the family plays certain roles, as found in the biblical story. This enactment of parts of the Exodus narrative fuses the present moment with the past, encouraging each participant to imagine themselves as part of the first generation to leave Egypt.

Some characters not found explicitly in the biblical text were also added to the Haggadah script. Prominent among them is an addition from the ninth century A.D. – a story about the four sons or children - the wise, the wicked, the simple and the one who does not know what to ask.

The versions varied, but the characters became a prominent part of the celebration. In many families today, they are called “children” or “daughters,” allowing for the inclusion of all members of the family regardless of gender.

These characters were inspired by a variety of biblical and rabbinic sources in which children ask certain questions about the celebration of the Passover. In the case of the son who does not know what to ask, the parent directly tells the child about the importance of the exodus without waiting for the question.

The Bible speaks of interactions between parents and children, but does not label the children in a specific manner. The main purpose is telling, examining and passing on the significance of the exodus from a number of different perspectives. The distinct roles of each child encourage the participants to reflect, in different ways, on the significance of liberation and how to communicate it to future generations.

Almost like a time machine, then, the Haggadah and celebration of Passover incorporates the manner in which history, the present and the future relate to one another. This unfolding of all dimensions of time allows those who celebrate to remember tragedies and loss in the past while also generating a real sense of hope for the future.

According to many parts of the Bible, the Passover festival was to occur once a year, and only in Jerusalem where the temple to the Israelite deity existed.

The celebration of Passover evolved into a home-based commemoration with the destruction of the temple by the Romans in A.D. 70. The biblical Passover mentioned in the book of Exodus also occurred in individual homes.

As such, the Bible provided ways to adapt the celebration in light of changed circumstances. The Bible describes how the second Passover – a year after the Israelites left Egypt – is celebrated in the wilderness, but seems to presuppose that its future celebration will be in the temple in Jerusalem. At that time, allowance would be made for those who had to travel long distances, by delaying its observance by 30 days.

This delay anticipated that geographical separation and time may not allow for normal Passover observance, a comfort directly derived from the Bible for those families who were not able to celebrate in 2020 in person.

The possibility now exists in 2021 that grandparents might be able to visit their families again since public health guidelines suggest it’s low-risk for vaccinated people to gather in small groups. When families gather for Passover, however, many may choose to reflect on the hard times of the past year as part of the Seder. Indeed, the celebration of the Passover has in it other references related to Jewish history, even if they were not always positive. 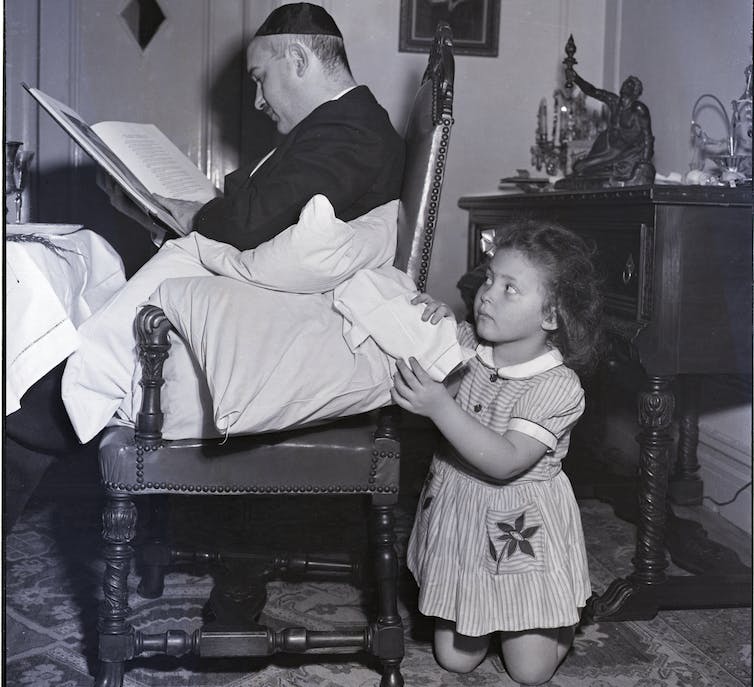 A young girl pretends to ‘steal’ the Afikomen, as part of the celebrations. Bettmann via Getty images

For example, part of the celebration of the Passover Haggadah entails the breaking of unleavened bread, a piece of which is known as the Afikomen, which is then hidden. Children try to find it for a prize, called a “treasure from Egypt.” The term Afikomen is itself a Greek word, referring possibly to after-dinner revelry. It is a reminder of another historical moment in which Jewish cultures were heavily surrounded and influenced by the Greeks.

The relationship with the Greeks was a complex one. Some part of the Greek influence was celebrated in early Jewish society. For example, the translation of the Old Testament from Hebrew into Greek, starting in the third century B.C., was considered a divine act.

There were also conflicts between Greek rulers and local Jewish populations, which led to a war in the second century B.C., known as the Maccabean Revolt. Indeed, there were debates in Judaism whether or not one could recite parts of the Bible in Greek, in worship services.

Yet the incorporation of the word Afikomen in the Passover Haggadah displays a willingness to borrow a Greek term into an important Jewish celebration.

Next year in Jerusalem

Looking to the future is central to the celebration of the Passover Haggadah. Despite the deliverance from slavery in Egypt, the meal concludes with the phrase, also said at the end of another celebration known as Yom Kippur, “Next year in Jerusalem.”

In a meal that blends past and present and nods toward the future, ending the Haggadah with such a proclamation highlights the reality that despite freedom from Egypt, most Jewish communities over time celebrated the Passover Haggadah away from their ancestral home and in circumstances that were not ideal.

This yearning for a world that is not yet healed and the toggling between past, present and future in the Passover celebration will perhaps hold special significance for many grandparents and their families in 2021.

Over 100,000 readers rely on The Conversation’s newsletter to understand the world. Sign up today.

Samuel L. Boyd does not work for, consult, own shares in or receive funding from any company or organization that would benefit from this article, and has disclosed no relevant affiliations beyond their academic appointment.

Watch Now: How to reduce your stress levels