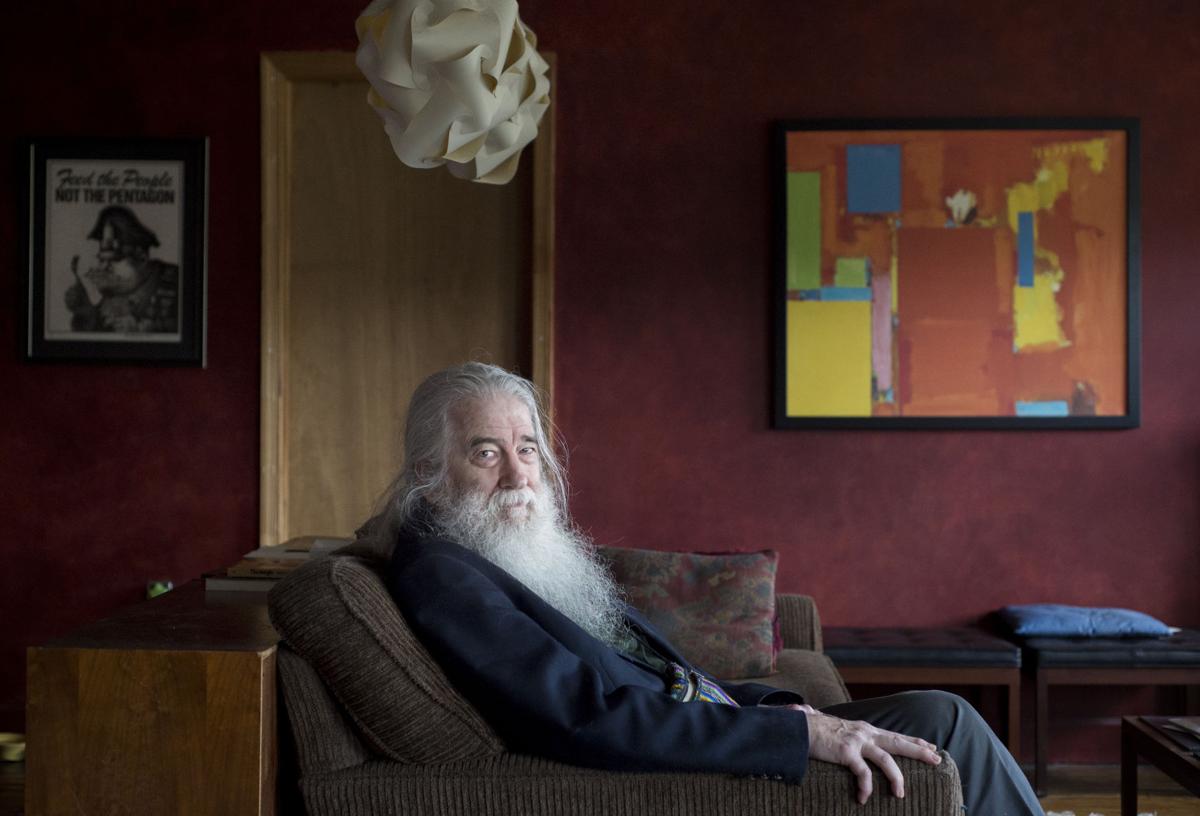 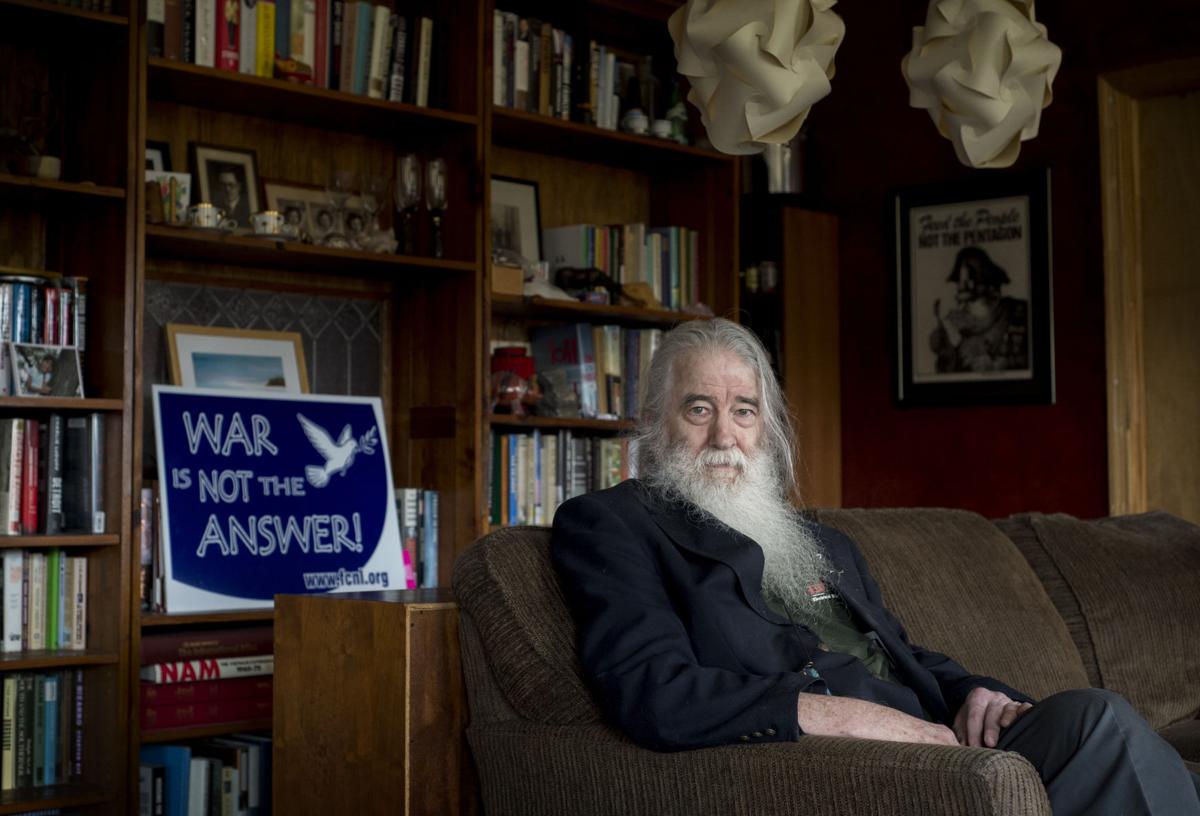 An Ann Arbor, Michigan, radio station played the song on Friday nights when Larry Bassett was in college, marking the time when he began considering civil disobedience before becoming a “war tax resister” at different times in his life.

At that time, the Selective Service office was one stop on Bassett’s Saturday morning U.S. Postal Service route. Protests often were underway as Bassett carried “like two inches of green” Selective Service cards.

“There I would be in my mail uniform being of age to be drafted, stepping carefully around these people who were being very nice to me,” Bassett said. “… I was one of those guys doing my job at that point.”

For a few months after he finished college and before he became a father, Bassett was eligible for the draft, forcing him to contemplate what he’d do if the military called his number.

Would he evade by leaving the country? Would he refuse under penalty of prison?

“I was pretty sure I wasn’t going, but I’ll never know,” Bassett said.

Instead of sending his money where a substantial percentage would go toward military spending, he “redirects” it to local and international nonprofit organizations, he said.

He is not against taxes in general and pays his local and state bills, he said.

He’s already received several past due notices from the IRS about a more than $3,000 tax bill from last year that included taxes on cashing in an individual retirement account. The IRS will soon garnish 10 percent of his Social Security check each month, he said.

The IRS cannot legally confirm or deny any specific cases, according to a spokesman who referred questions regarding “tax resisters” to a document on the IRS website called “The Truth About Frivolous Tax Arguments.”

Bassett was among the founders of the National War Tax Resistance Coordinating Committee (NWTRCC).

The IRS took him to New York federal court in 1985 over his 1981 tax return, but the case was dismissed after the judge ruled he did not have to provide asset information to the IRS, according to Bassett and a news report he provided.

“I owed $46 in taxes and they took me to federal district court because I was an organizer and they wanted to make the point that you can’t do this kind of stuff,” Bassett said.

The amount of money Bassett refuses to pay this year is much larger than normal, Benn said.

“It’s pretty unusual for someone to announce that level of resistance,” Benn said.

Part of the point of resisting is talking about it publicly, said Bassett, who reached out to The News & Advance for this story.

NWTRCC website and phone call traffic have risen since the election of President Donald Trump, who has proposed a $54 billion increase to military spending while gutting programs throughout the federal government to offset them.

Benn has been fielding “lots more requests for information from people who are especially angry because of Trump for their own reasons, perhaps,” Benn said.

But Bassett isn’t one of them, he said. He’s refused to pay federal taxes at different times in his life, but paid them during his two marriages, Bassett said.

After a divorce eight years ago, he began resisting again, although his low-income jobs have kept his federal tax bill low when he owes one.

Bassett cashed it in all at once, he said, to spread the money among several people to fulfill his father’s will. He could have cashed in the annuity gradually to spread out the tax burden, but decided to do it all at once since he was resisting.

“Even though I’m resisting a big amount this year, it’s like, a missile’s worth, which is pretty incredible in my mind,” Bassett said.

Each Tomahawk missile recently used to bomb a Syrian military base in response to reported chemical weapons attacks on civilians by the Syrian government cost more than $1 million, according to calculations using a Department of Defense weapons acquisition report from 2016.

In 2016, defense spending of $584 billion made up almost half of the United States’ federal discretionary budget of $1.2 trillion, according to a graphic created by the United States Congressional Budget Office. This compares to $2.4 trillion of mandatory spending, which includes Social Security, Medicaid and Medicare and federal employee retirement benefits, according to the graphic.

Along with a letter to the IRS, Bassett planned to mail letters to Rep. Bob Goodlatte and U.S. Senators Tim Kaine and Mark Warner.

Bassett doesn’t know any other war tax resisters in the area, but participated with the Seven Hills Progressives’ “No Ban, No Wall” protest recently.

In Guthrie’s song, the folk singer described one person walking into a psychiatrist and singing a verse of “Alice’s Restaurant” as a way of avoiding the draft because “they may think he’s really sick and they won’t take him.”

If three people walk in, sing the chorus and walk out, it’s an “organization” Guthrie says. Fifty people a day singing the chorus could be a movement, according to Guthrie.

While Bassett says he refuses to pay federal taxes completely, other people refuse to pay until the collection comes, slowing down the process to prove a point.

“If they collect from me, so be it,” Bassett said. “They’ve usually had to spend more money collecting from me than they’ve ever gotten from me.”

Myths parents believe will get their baby to sleep

Myths parents believe will get their baby to sleep

Why November is one of the best months to save money

Why November is one of the best months to save money