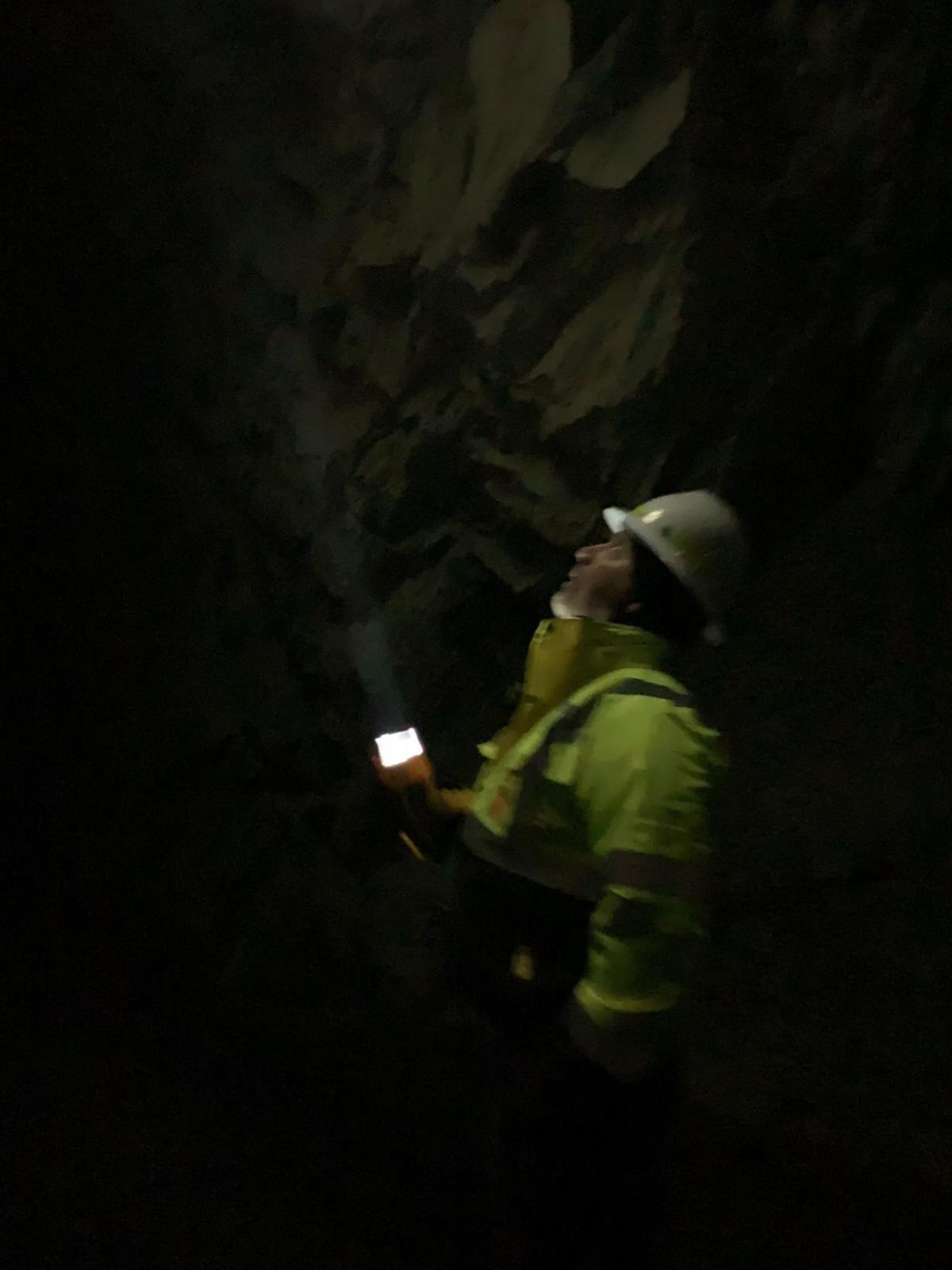 Mark Zimmerman, senior project manager, shines his flashlight up in the Blue Ridge Tunnel on Dec. 19, 2019. 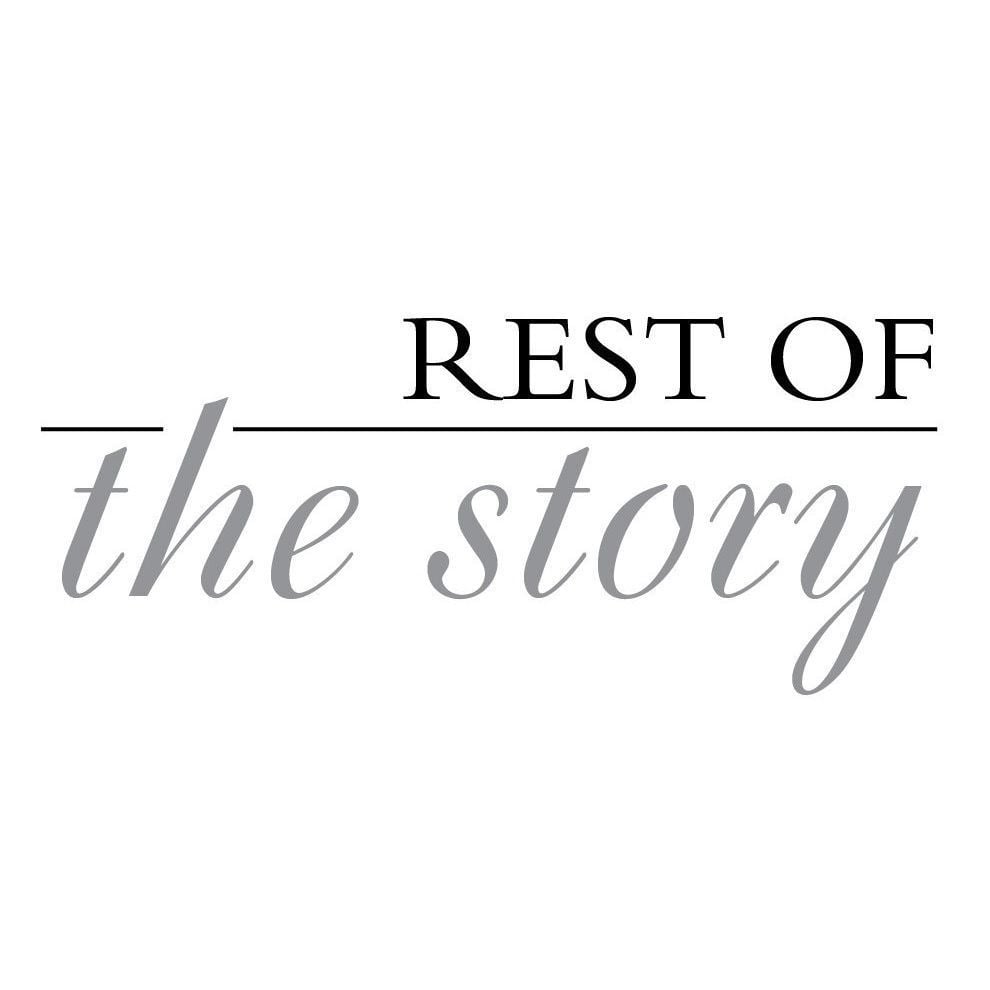 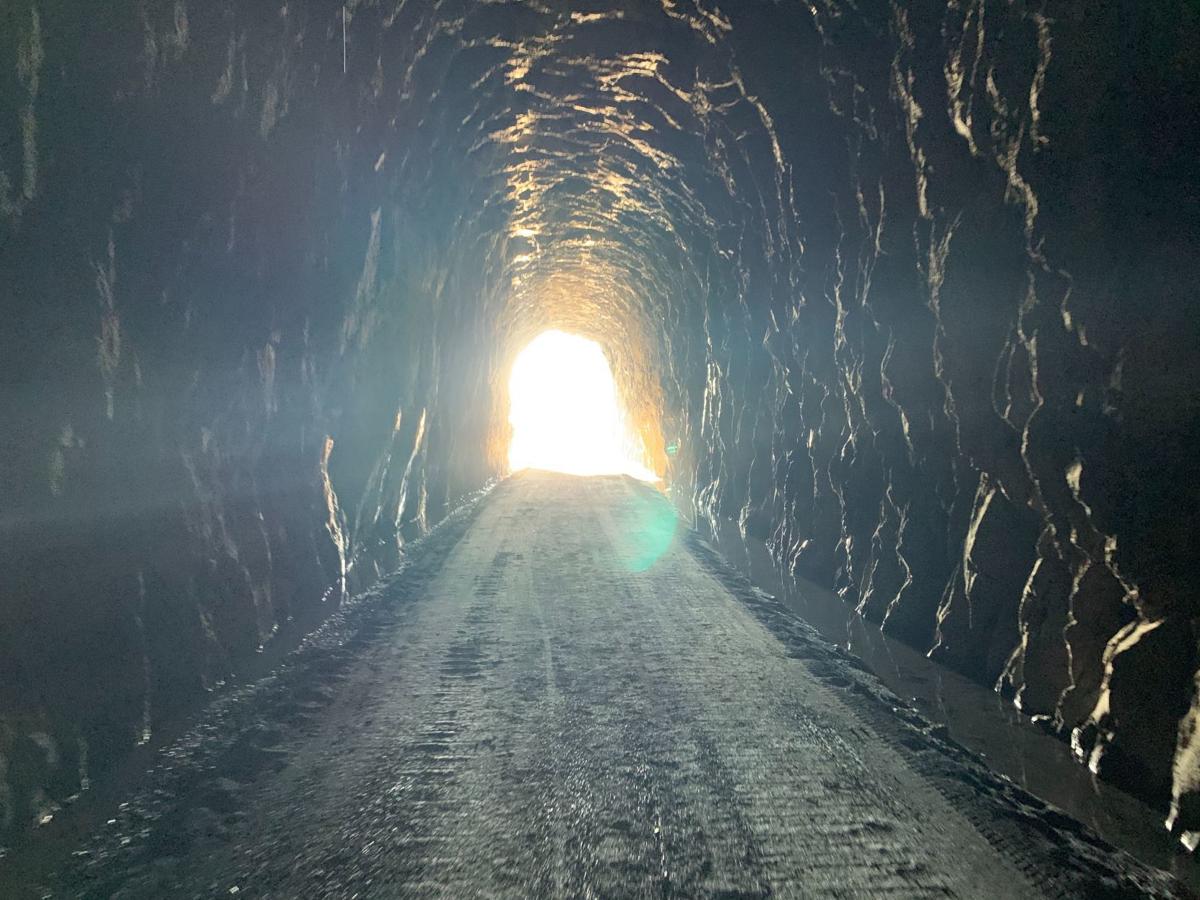 The Nelson County side of the Blue Ridge Tunnel from inside on Dec. 19, 2019. 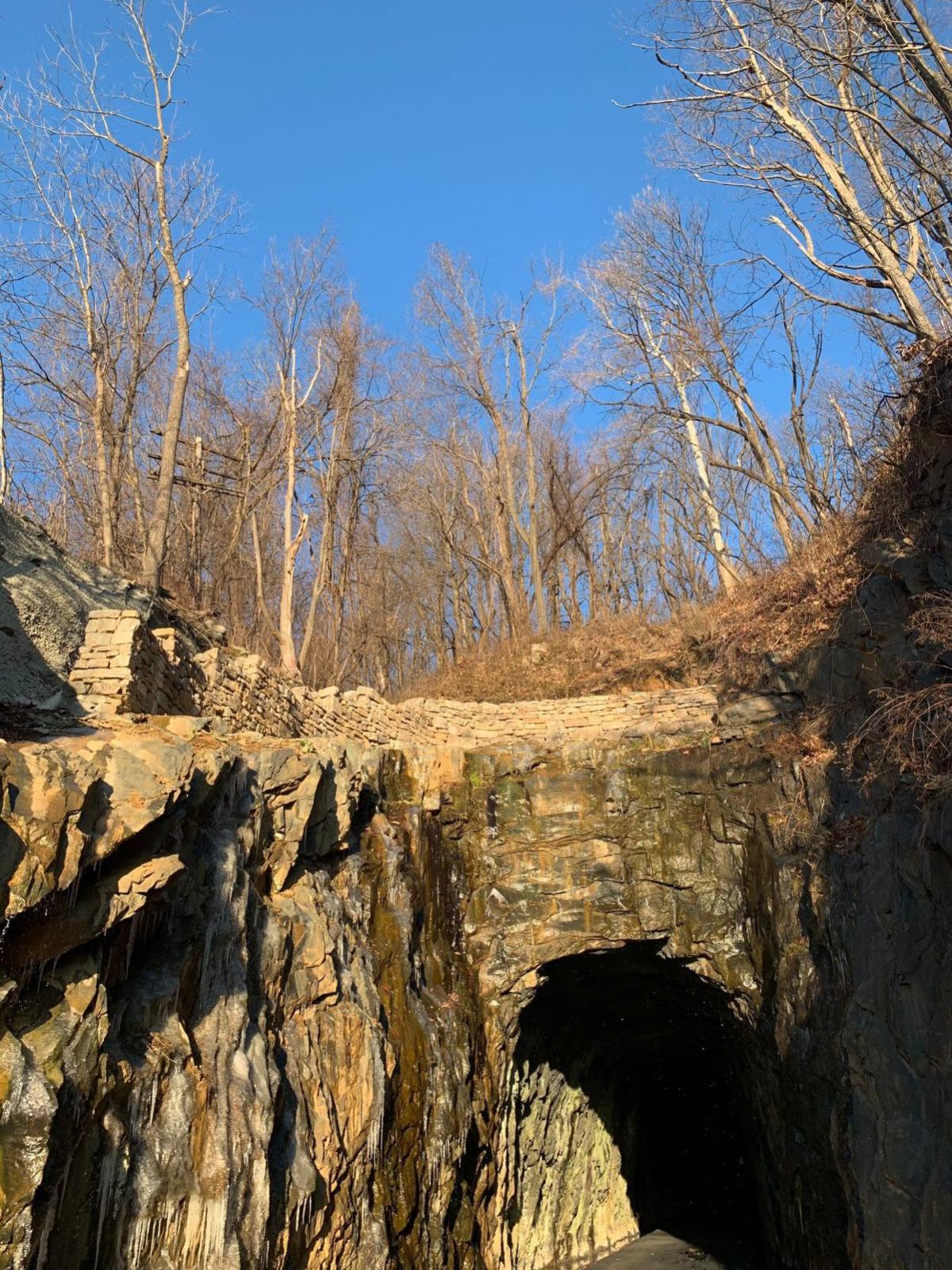 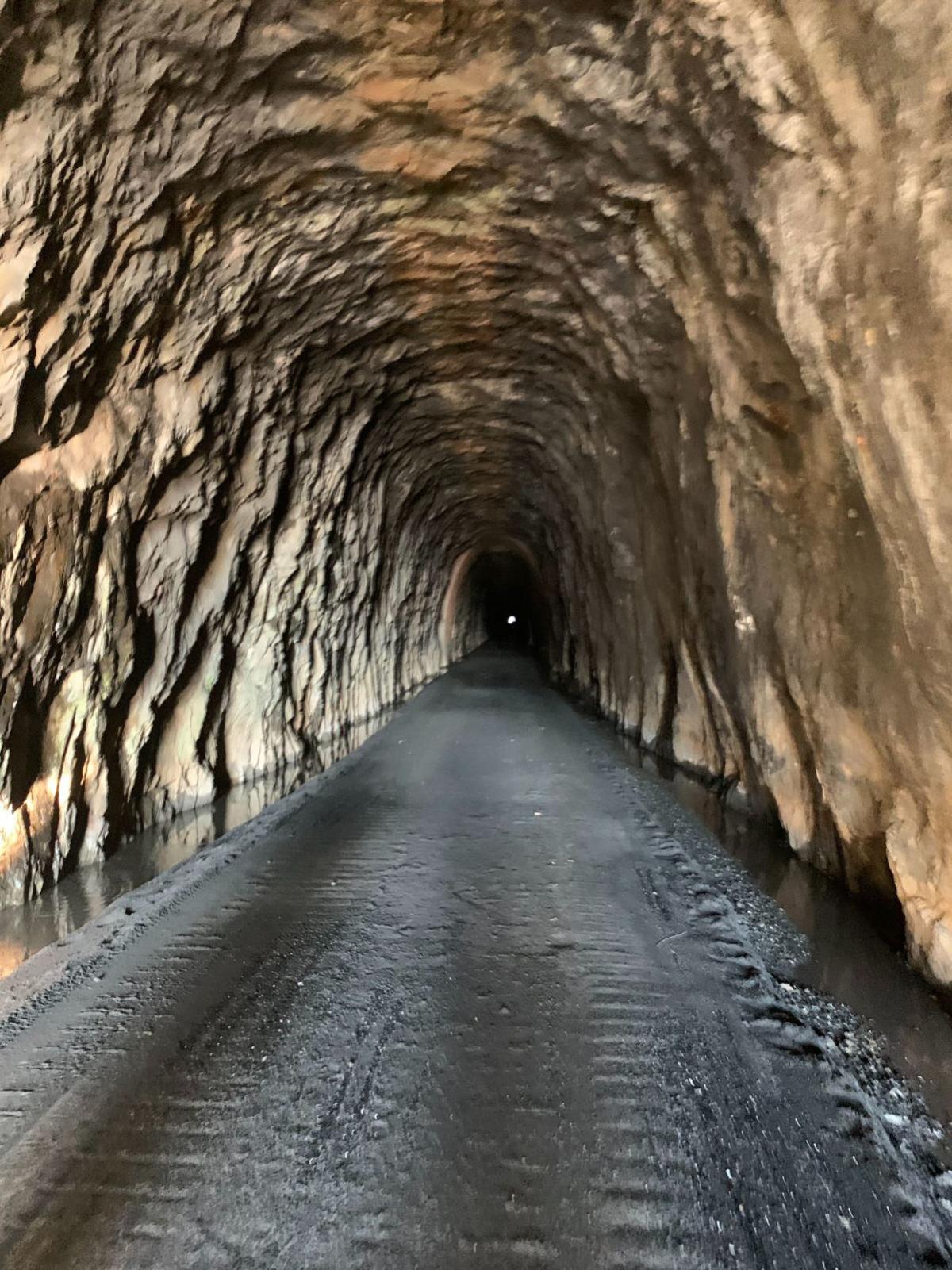 The Augusta side of the Blue Ridge Tunnel taken from the Nelson County side on Dec. 19, 2019

After years of work and numerous setbacks, it looks as though the Claudius Crozet Blue Ridge Tunnel in Afton will be complete in 2020.

Although the project was initiated in 2001, according to County Administrator Steve Carter, ground breaking didn’t take place until 2014, a year and a half after grant funding was awarded for the beginning phase of the project. The 19-year-long dream was broken into three phases and, despite financial roadblocks over the years, the final phase is set to be complete in June 30, 2020, according to Mark Zimmerman, senior project manager.

President of the foundation and Nelson resident Allen Hale said the completion has been a long time coming and is possible due to solid relationships between public and private entities.

“I am glad I will have lived to see it completed,” Hale said. “It has been a real cooperative venture from state and local officials, principally Nelson County, which is the owner. Nelson County has taken the lead, but is supported from Waynesboro, Albemarle, Augusta, and others on the foundation board of which I am president.”

Hale said phase 3, which began in October after funds were secured in August, includes building parking for visitors on the west end in Augusta County.

“[Phase 3] includes building the trail, which is well on its way to complete, on the Western side. When you come out on Augusta County side, this trail will go up the mountain to U.S. 250,” Hale said.

The Blue Ridge Tunnel, as it was appropriately named when constructed in the 1850s because it goes through the Blue Ridge Mountains, was open for almost 100 years servicing the Virginia Central Railroad. In the late 1800s, the VCR was renamed to Chesapeake and Ohio Railway and ran through the mountain until the tunnel closed in 1944. At the time the original tunnel was complete, it was the longest mountain railroad tunnel in the world, according to Hale and Zimmerman. The tunnel is 4,250 feet long, Zimmerman said.

The tunnel is named after its designer; a French engineer named Claudius Crozet. It was named for him after another tunnel replaced his original work after its closure in 1944. Hale said the tunnel is of great interest to the public, but also engineers specifically because of what Crozet was able to accomplish.

“It’s really important for the region. It’s a very historic tunnel. It will be a great hiking and biking trail available to people. I am sure they will come from all over, not just locally,” Hale said.

Zimmerman said in the 1850s, mostly Irish immigrants worked to create the railroad using black powder and hand drills. Construction started at both ends of the tunnel and Zimmerman said when they were finished, they were only one inch off alignment.

From one parking lot to the other, which currently is under construction, the whole future trail totals two and half miles. When walking from the Nelson side to the Augusta side, the tunnel slopes left and uphill and becomes completely pitch black less than half way through despite the sun shining outside.

“There were no lights back then, so there aren’t any now. People should bring flashlights,” Zimmerman said.

Zimmerman shone his flashlight on two areas where 1950s concrete bulkheads had to be blasted out with multiple sticks of dynamite. According to the Claudius Crozet Blue Ridge Tunnel website, a gas company had the bulkheads installed when leasing the tunnel for large scale propane storage. One of the bulkheads is essentially in the center of the mountain tunnel.

Removing the two reinforced concrete bulkheads was the most expensive part of the project. Zimmerman said before they were removed, one would have to crawl through a pipe to get from one end of the tunnel to the other. Hale said this portion of the project proved to be the most challenging, especially financially, but the partnerships paid off. The original budget for phase 2 was around $2.7 million, but it cost much more and grant funding helped see it through.

“The Commonwealth Transportation Board has wanted to see this project completed, so additional funds were provided,” Hale said.

Work officially began for phase 1 began in 2014 thanks to funding from the Virginia Department of Transportation and the Commonwealth Transportation Board through the “Transportation Alternatives” competitive grant program, according to the county. Total funding for phase 1 was $749,149. phase 2 totaled $3.7 million, according to Carter. phase 3, for which funding began flowing in October, totals about $1.3 million. Carter said the project was made possible because of grant money.

The culmination of 2018 provided an end to the drawn out phase 2 and mid-2019 provided the beginning of phase 3 called “the western trail.” Hale and Zimmerman both noted the tunnel, although completed, is not open to the public yet. Out of safety concerns, they urged the public to stay away until it’s official opening.

Mark Zimmerman, senior project manager, shines his flashlight up in the Blue Ridge Tunnel on Dec. 19, 2019.

The Nelson County side of the Blue Ridge Tunnel from inside on Dec. 19, 2019.

The Augusta side of the Blue Ridge Tunnel taken from the Nelson County side on Dec. 19, 2019