Enjoy unlimited articles at one of our lowest prices ever. You can cancel at any time!
Already a subscriber?
Log in or Activate your account.
Loading&hellp
No thanks, return to homepage.
You are the owner of this article.
Edit Article Add New Article
You have permission to edit this article.
Edit
News
Obituaries
Opinion
Sports
Lifestyles
Our Properties
Buy & Sell
Customer Service
Public Notices
Share This
1 of 5 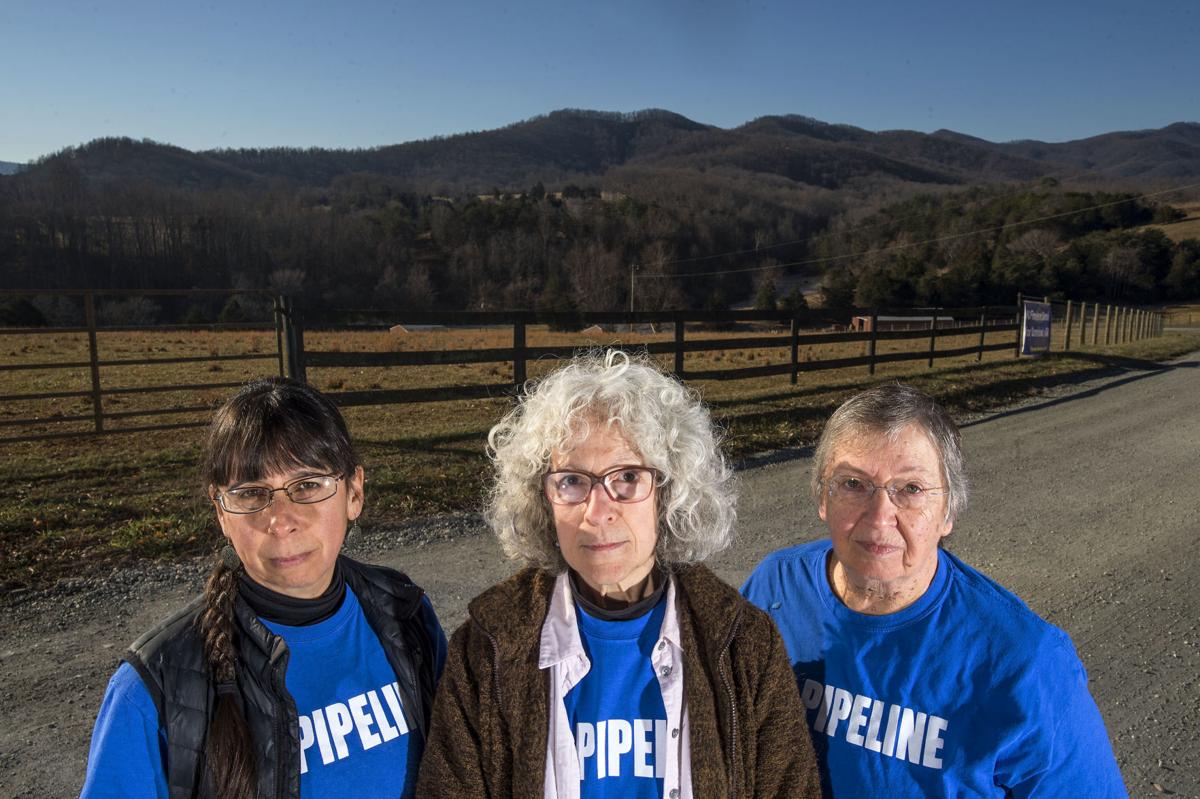 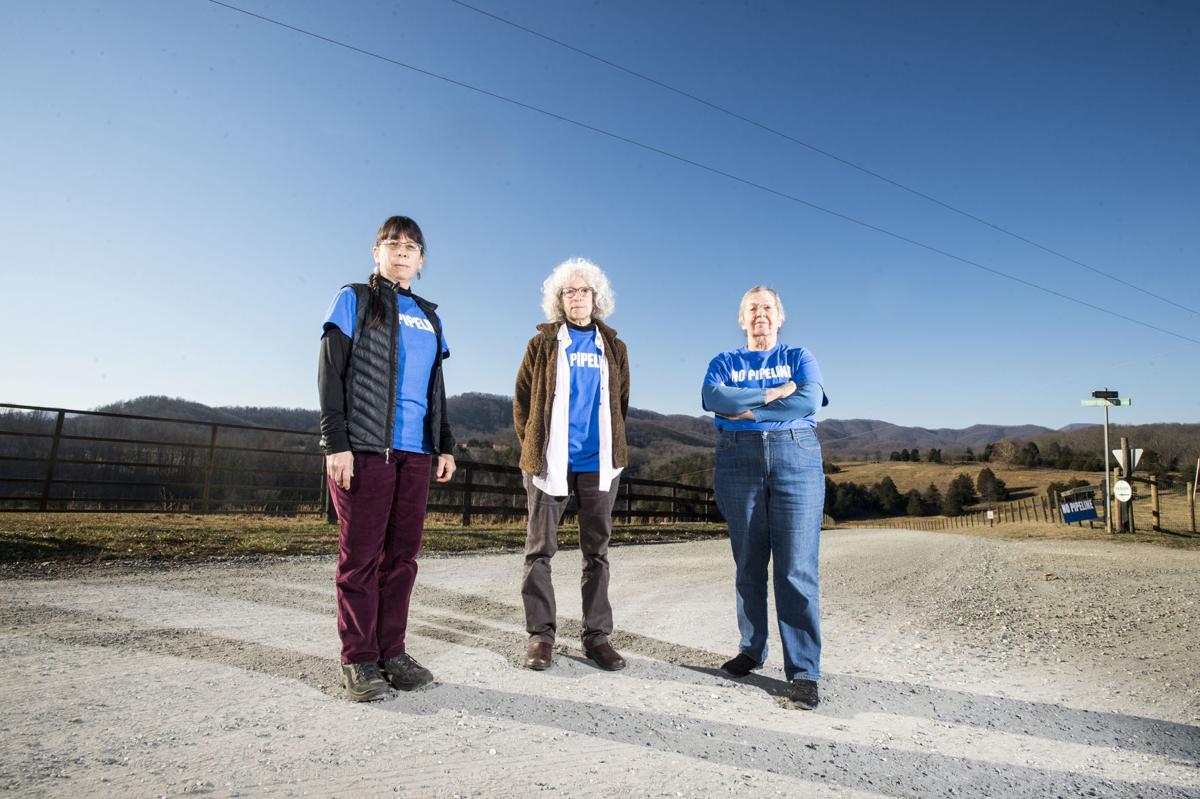 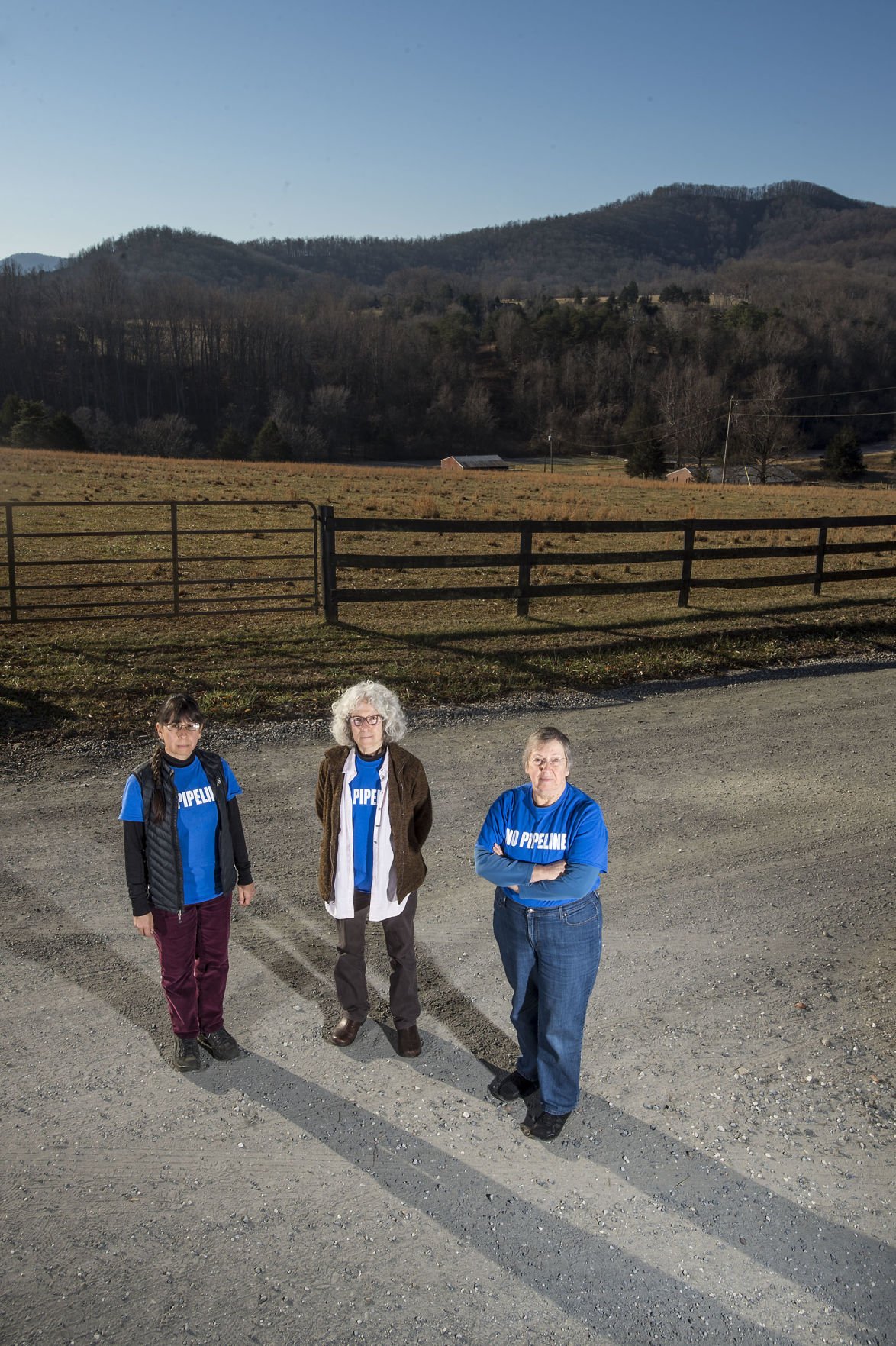 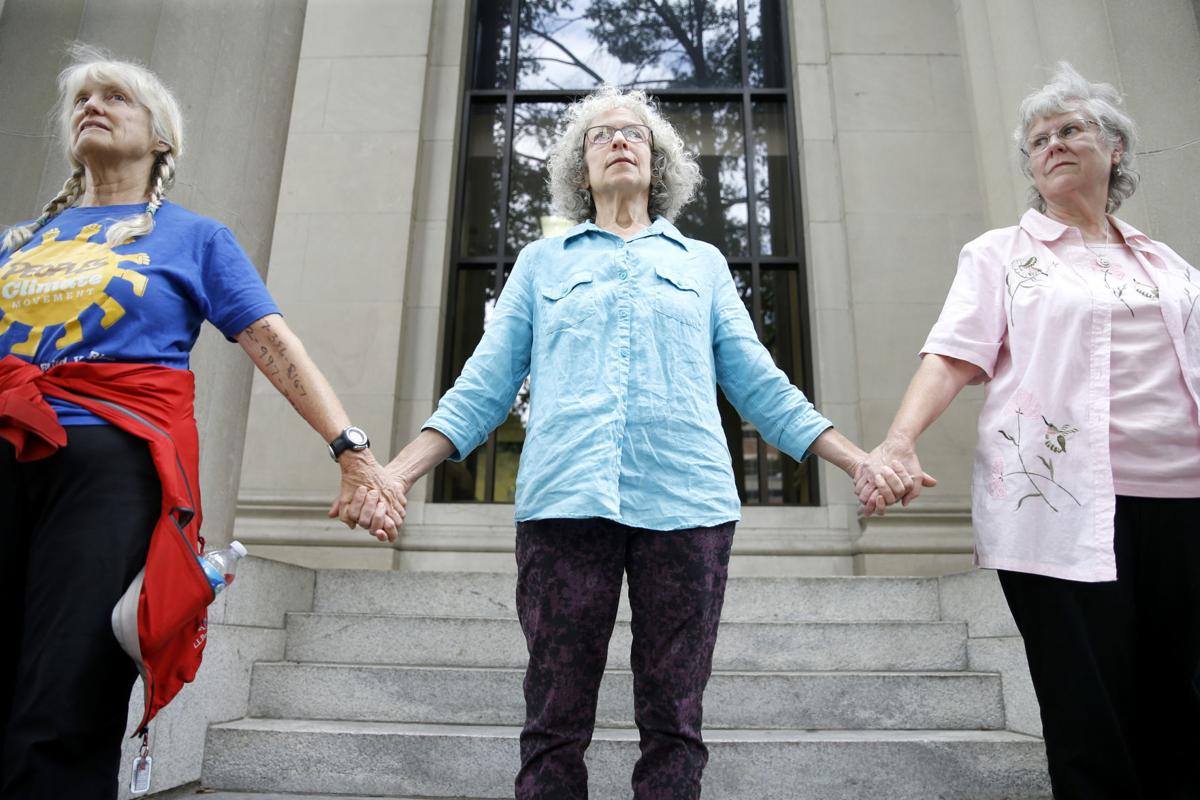 Deborah Kushner (center) of Nelson County holds hands with fellow protestors outside of the DEQ headquarters at 7th and Main in Richmond on Thursday Sept. 14, 2017 to protest the agency's handling of a pair of controversial natural gas pipelines. (Richmond Times-Dispatch photo) 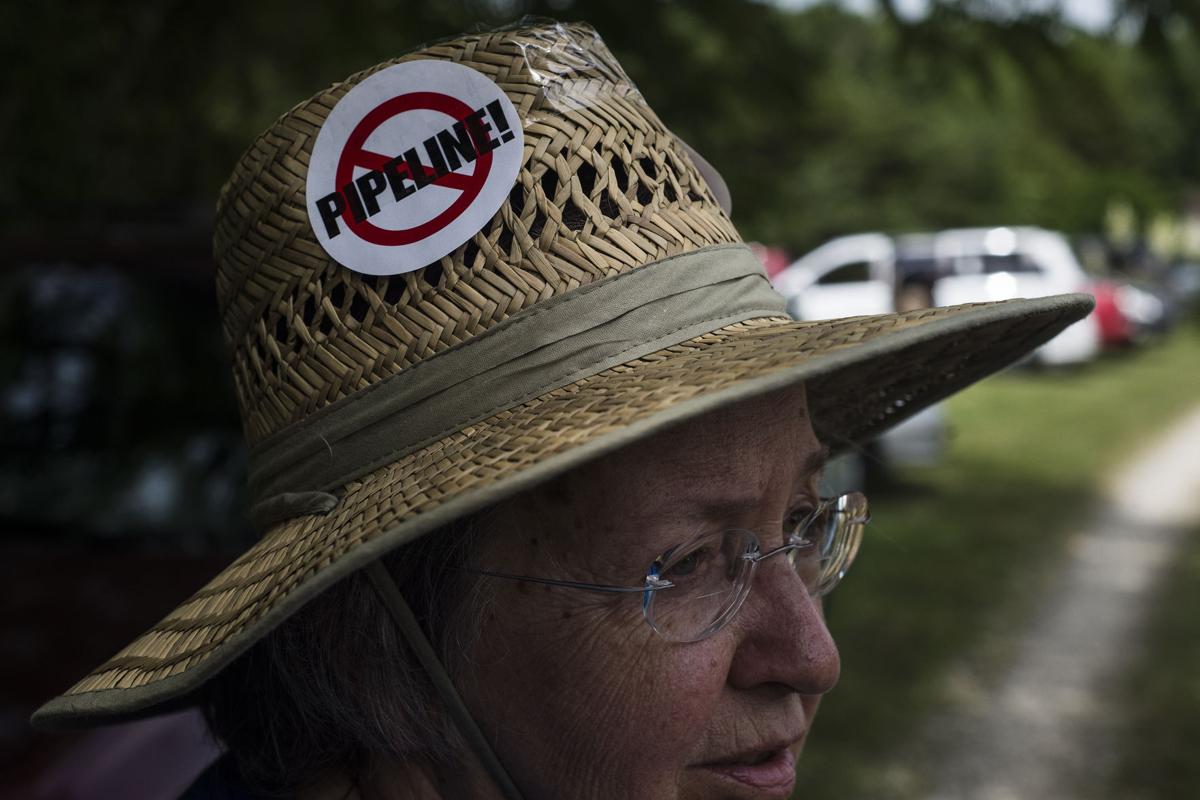 Eleanor Amidon wears a hat showing her opinion of the Atlantic Coast Pipline during an anti-pipeline event in Wingina in summer 2016. File photo by Lathan Goumas/The News & Advance

Deborah Kushner (center) of Nelson County holds hands with fellow protestors outside of the DEQ headquarters at 7th and Main in Richmond on Thursday Sept. 14, 2017 to protest the agency's handling of a pair of controversial natural gas pipelines. (Richmond Times-Dispatch photo)

Eleanor Amidon wears a hat showing her opinion of the Atlantic Coast Pipline during an anti-pipeline event in Wingina in summer 2016. File photo by Lathan Goumas/The News & Advance

Deborah Kushner knows firsthand how a date, person or event can serve as a defining moment, splitting life into “before” and “after.”

There was Nelson County before the pipeline.

“Boy, that was a different age,” she said. “The pre-pipeline age.”

And there’s now, when hundreds of residents continue to battle the project.

Some, like Afton resident Joyce Burton, have gone from full- to part-time work to have more time for the pipeline fight.

Others, like Kushner and Afton resident Eleanor Amidon, have traveled to Richmond multiple times. They’ve networked with other Virginia opponents and, along with hundreds of others, attended a key State Water Control Board meeting this month that culminated in conditional approval for a permit that governs pipelinewater crossings in the commonwealth.

“We have never seen this kind of uprising of people in this state on an environmental issue,” David Sligh, an environmental attorney, former DEQ engineer, conservation director for Wild Virginia and investigator for the Dominion Pipeline Monitoring Coalition, told the Richmond Times-Dispatch following the board’s Dec. 12 decision.

It all started about 3½ years ago, when Nelsonians learned their county would be one of 12 counties, along with two cities, in Virginia that would be crossed by the 600-mile pipeline.

Many in Nelson heard about the project from neighbors. Others who were on the initial route heard about it from Dominion, the leading partner of the ACP.

“It was chilling, absolutely chilling,” Kushner said. “… It was the most horrible feeling. … This beautiful land was being invaded. It was under threat.”

Burton, a resident of Shannon Farm in Afton, which was on the original route, said the organic farm managed by members of its cooperative community would be threatened.

Then she thought about her sanctuary, a wooded area set aside by members to be perpetually undeveloped land. The evergreen saplings she enjoys lying under would be cut down if the pipeline were constructed there. No more peaceful evenings in her getaway spot.

Burton and other opponents thought the “pristine” land of rural Nelson County wouldforever change for the worse.

“Oh my god, we’ve got to do something,” Burton remembers thinking.

The project had just been proposed at that point in 2014. “None of us knew anything,” Burton said.

They’d soon delve into a seemingly bottomless ocean of information about the three-state pipeline, and an ongoing fight to keep Nelson free of the 42-inch steel pipe. Opponents like Kushner, Amidon and Burton vowed to do all they could to stop the project.

It was a “no-brainer,” Kushner said.

‘All of the above’

Today, hundreds have adopted the anti-pipeline cause in Nelson County. The fight started, though, with a handful of concerned residents just trying to navigate the best first step.

Petitions circulated throughout the county and emails weresent back and forth to figure out as much information about the project as possible. Residents went to work reading Atlantic Coast Pipeline filings about the route, construction, permitting and more.

Soon, nonprofits and other organizations dedicated solely to fighting the pipeline began to form.

There was the Pipeline Education Group, a smaller group of individuals who aimed to educate adults about the project’s groups. Friends of Wintergreen and Friends of Nelson, two of the more prominent nonprofits involved in the fight, began as a coalescence of potentially affected landowners.

“A 42-inch gas pipeline has no business being here,” reads the first message to visitors to Friends of Wintergreen’s website.

Other groups are chapters of larger organizations representing the region.

Residents realized the best shot they had at stopping the project would be to fight in whatever way they could.

“The best way to operate would be ‘all of the above,’” Amidon said. “If somebody thinks of something that they want to do, support them. If you want to join in, join in. If you don’t want to join in, that’s fine, just don’t put a damper on anything. Just let it rip. …

“I think the way it is makes the most sense.”

On any given Saturday, patrons of the Nelson County farmer’s market can walk up to a table to pick up literature that proclaims the supposed evils of the ACP.

It’s one of the fronts on which anti-pipeline residents wage their battle.

Enjoy unlimited articles at one of our lowest prices ever. You can cancel at any time!
Already a subscriber?
Log in or Activate your account.
Loading&hellp
No thanks, return to homepage.

Other times, it’s public meetings or getting the word out to media.

They’ve come up with more unique ways to voice their opinions, too.

Take, for example, a rally in front of the Nelson County Courthouse last year. Songs and chants filled the air in an attempt to have their concerns reach the ears of county officials. All the while, opponents held signs opposing the project.

But they also worehandmade costumes, “masks” worn on top of their heads made to look like animals. There were owls, opossums, foxes and salamanders, among others, to bring attention to the species that could be affected by the pipeline but can’t speak to make their case.

The fight extends beyond the borders of Nelson County, too.

Amidon and others from Nelson picket twice a monthin front of Dominion offices in Charlottesville to raise awareness about renewable energy sources.

Kushner and a small group of others walked along the route through Virginia, camping along the way, to get a closer look at what would be affected.

Opponents from Nelson oftentravel to public meetings, protests or rallies, many of them taking place in Richmond.

It was in Richmond, in fact, where Kushner found what she believed to be the ideal way to voice her concern.

In September, Kushner was among 19 pipeline opponents issued court summonses for their civil disobedience. They blocked the entrance to the headquarters of the Virginia Department of Environmental Quality, which is reviewing applications for multiple permits required for the ACP, to show her displeasure with how the agency has handled the process.

“It was a beautiful way to make a statement that the DEQ isn’t seeing us, isn’t hearing us and isn’t doing their job,” she said.

Kushner and the 18 others were charged with misdemeanor “obstruction of free passage.” She said it was the third time she’s been charged for such protests of the pipeline.

Kushner explained while every opponent has his or her strengths, she thinks the protests and other events she’s attended are the best way for her to make a difference.

‘Take this to the mat’

Some opponents do what they can to fight the pipeline, taking a few hours out of their day to show up at rallies, for example. Others think about it, read about it, write about it, talk about it and do something about it.

To speak for the environment, against eminent domain — the power the ACP now has to condemn land for the project following federal approval in October— and on behalf of their neighbors on the route is a “necessity,” Kushner said.

“I cut back on my work so that I could spend more time in this endeavor, because I think it’s that critical. It feels like life or death,” said Kushner, who works in human services. “I don’t feel like I have a choice to be passive. I feel like it’s my duty to do what I can.”

Burton, too, has spent so much time on the project that “I don’t know how you could quantify it.”

She said the only way she can describe it is to say “it’s far more hours than I have spent working my paid job.” In fact, she added, she’s cut out her part-time work as a physical therapist completely during the fall because of the number of developments related to permitting that have taken place.

Burton and Kushner both expressed the toll the fight has taken on them.

“Gosh, the learning curve was so steep, I can’t step out now,” Burton said. “I’m gonna stick in this for a while longer … but the reality is we don’t know when we’re gonna be done. … It’s exhausting.”

But she won’t let up despite her conviction that energy giant Dominion has resources that could be considered overwhelming.

“They assume that they are gonna be able to wear us down,” Burton said of Dominion. “The contrary part of me says, ‘… Dammit, we’re not gonna give you that satisfaction. We’re gonna take this to the mat.’”

Even thoughthe ACP already hasreceived federal approval and a number of other important permits, Burton thinks there still is the possibility some agencies can stop the project. Lawsuits also could serve to stymie progress, she said.

Of course, “it’s certainly possible” the pipeline will still be constructed, she said, but her work — the “righteous fight” — to stop it will go on.

While the route moved away from Shannon Farm, Burton’s home, early in the routing process, Burton is convinced she must continue to fight the ACP.

“If they end up being able to ram this pipeline through, I want to know that I did everything that I could, because I have to live with me at the end of the day. … There have been injustices in the world from the beginning of time, and there will continue to be. But I’m going to keep fighting against them. And I hope others will, too.”

ACP filings show construction-related work along the route will take place in spreads over the next couple of years, so opponents know they still have a long road ahead.

Thinking back to when she first decided to take action, Kushner said she had “no idea” what the future would hold. She didn’t know she’d be charged for illegal activities related to the fight. She had no idea how many hours she’d put into driving or attending rallies.

“I think it was so unbelievable that it could actually be proposed here in such an amazing place, for so unnecessary a reason. I had no thought about what it would be like. I certainly had no thought that it would last 3½ years,” Kushner said.

Get the weather news you need in your inbox every morning! Sign up

Stay up-to-date on the latest local crime news with our weekly newsletter.