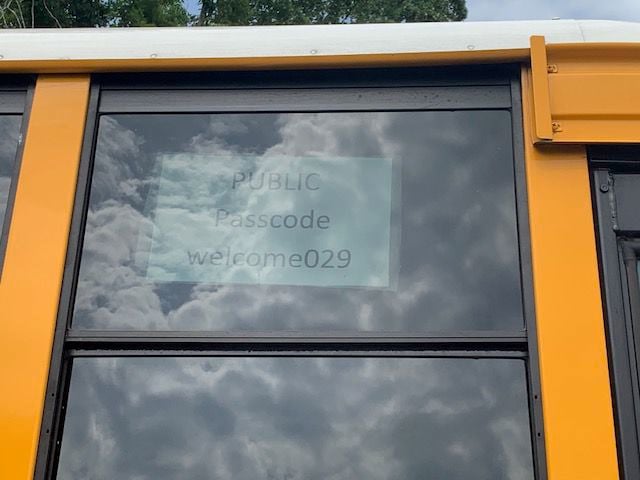 The COVID-19 crisis has disrupted the local economy; shattered the normal flow of gatherings, activities and events; and caused many to struggle to make ends meet.

In the onslaught of negative effects the virus has brought to everyday life in Amherst County, a common feeling among local officials and residents has reverberated crystal clear: reliable, high-speed Internet service is vital now more than ever.

Nine months before the coronavirus was declared a pandemic in the United States, Amherst County Board of Supervisors members Claudia Tucker and Jimmy Ayers in late June stood atop Tobacco Row Mountain celebrating the first of a string of towers coming online to boost broadband coverage in rural areas.

Tucker, the board’s chair, said at the June 2019 ribbon-cutting the occasion represented a banner day for the county in its mission to boost broadband outreach through a partnership with SCS Broadband. To date, the Nelson County-based company has placed equipment on a handful of public safety towers across the county and was set to begin the final two when COVID-19 hit, County Administrator Dean Rodgers said in a recent virtual chat with Amherst County Chamber of Commerce leaders.

The transmitters needed to complete the project that aims to bring about 90% of the county up to speed on receiving broadband coverage, are from China and has caused a delay, Rodgers said.

“It is a priority,” Rodgers said of the push for broadband. “It has always been a priority. It’s just a matter of figuring out how we’re going to do it.”

The CARES Act, a federal relief package Congress passed, has generated more than $2 million for Amherst County to use under certain conditions to respond to COVID-19. Rodgers said $1 million of that money is going toward broadband expansion in Amherst County and Amherst County Public Schools also is planning to use its share of federal stimulus money, just more than $820,000, toward its goal of bringing internet access to the homes of every student in Amherst regardless of where they live.

Amherst Schools Superintendent Rob Arnold said during the county school board’s June 11 meeting a major challenge with distance learning, which is positioned to become a major component of education in the 2020-21 school year, is high-speed broadband.

The division is working with Lit Communities, a company with national outreach, to expand broadband capabilities.

“The end goal is to provide hard-wired Internet access to our families regardless of where they live in the county,” a June 3 post on the Amherst school division’s official Facebook page said.

The schools are providing directory information to Lit Communities to create a map of the county to identify what options currently are available to families and areas currently underserved with Internet access.

“They are putting their arms around all our assets and finding ways to finance it,” Arnold recently told the Amherst County School Board.

While the efforts would benefit the entire county, Arnold said Lit Communities’ No. 1 goal is to meet students’ internet needs this upcoming school year.

School board member Ginger Burg expressed excitement on the expansion initiative, describing how she was cut off some during a June 4 virtual town hall, which according to Arnold drew 400 participants, because of online connection issues.

Amanda Wright, a school board member who lives in the Temperance area, said she appreciates the division picking up the baton on the county’s Internet problem “which I have suffered through for 22 years.”

“I am so happy there may be some forward movement on that because I live on the fringe of society and would like to have good Internet,” Wright said at the board’s June 11 meeting.

Rodgers said the county is looking to help the division in its efforts and is looking at ideal locations for towers, monopoles and fiber, as well as “dead spots” where the infrastructure could reach.

“If you’re in the shadow of a mountain, you’re not going to get service,” Rodgers said, adding installing towers and monopoles are ways to fill in those spots.

The $1 million from the county’s share of the federal stimulus for broadband expansion also is aimed at helping many residents teleworking during the pandemic, he said. The county is moving swiftly, he added.

“We can’t cut a check until the goods are received,” Rodgers said. “... We don’t want to lose any of this funding.”

Technology is one of six focus areas an Amherst schools’ task force is focusing on with planning efforts underway to reopen schools in what Arnold said will be much a different scenario for public education than when students last were in school in the second week of March. The school board is set to receive a presentation of the return plan at its July 9 meeting and will tackle it further during a July 20 retreat session.

The division also is using its bus fleet to get broadband service to rural areas. Assistant Superintendent William Wells said a piece of WiFi equipment on buses extends the service of a hotspot or aircard around the bus for approximately 200 feet.

“If people need Internet connectivity they can pull up to one of the buses we will have staged in the community and access it,” Wells said.

The division has buses at Amherst Church of God on U.S. 60 East near Gladstone and New Prospect Baptist Church in the Pleasant View area and is working to put some at Scott Zion Baptist Church in Madison Heights, the Coolwell Recreation Center and the Pedlar Rescue and Fire station the Forks of Buffalo area. School officials also are trying to get a bus with the equipment to a location in Old Town Madison Heights, Wells said.

Arnold said social distancing will be a major challenge for the schools and some models have been reviewed at rotating times for students to come in. Six-foot separations in classes typically with 22 students will mean smaller class sizes when students physically are present and the 6-foot rule also must be adhered to on school buses. Students on buses would sit in every other seat, though siblings can sit together, and the division anticipates fewer bus riders and a spike in car ridership, according to Arnold.

The school system also must be prepared to give families who don’t want to return their children to school for safety reasons an online option, which he told the school board Virtual Virginia will assist in.

Gov. Ralph Northam on April 13 announced a dramatic expansion of Virtual Virginia, the Virginia Department of Education’s existing online learning system, to allow every teacher in the state to host virtual classes. Virtual Virginia content can be loaded onto devices for use by students in homes without sufficient internet access to support online learning, according to Northam’s announcement.

From telehealth to education, broadband is critical in allowing Amherst County residents to enjoy the same quality of life as more populated areas, Tucker said of using the stimulus money for expanding coverage.

“The students of Amherst missed almost three months of school. Some students had the ability to learn virtually because of access to the Internet but many did not,” Tucker said. “The inequality that presents is unacceptable; broadband is not a ‘nice to have,’ its a must have. Whether it’s towers on schools or equipping our school buses ... we have to pursue every avenue available and using this funding will help us get there.”