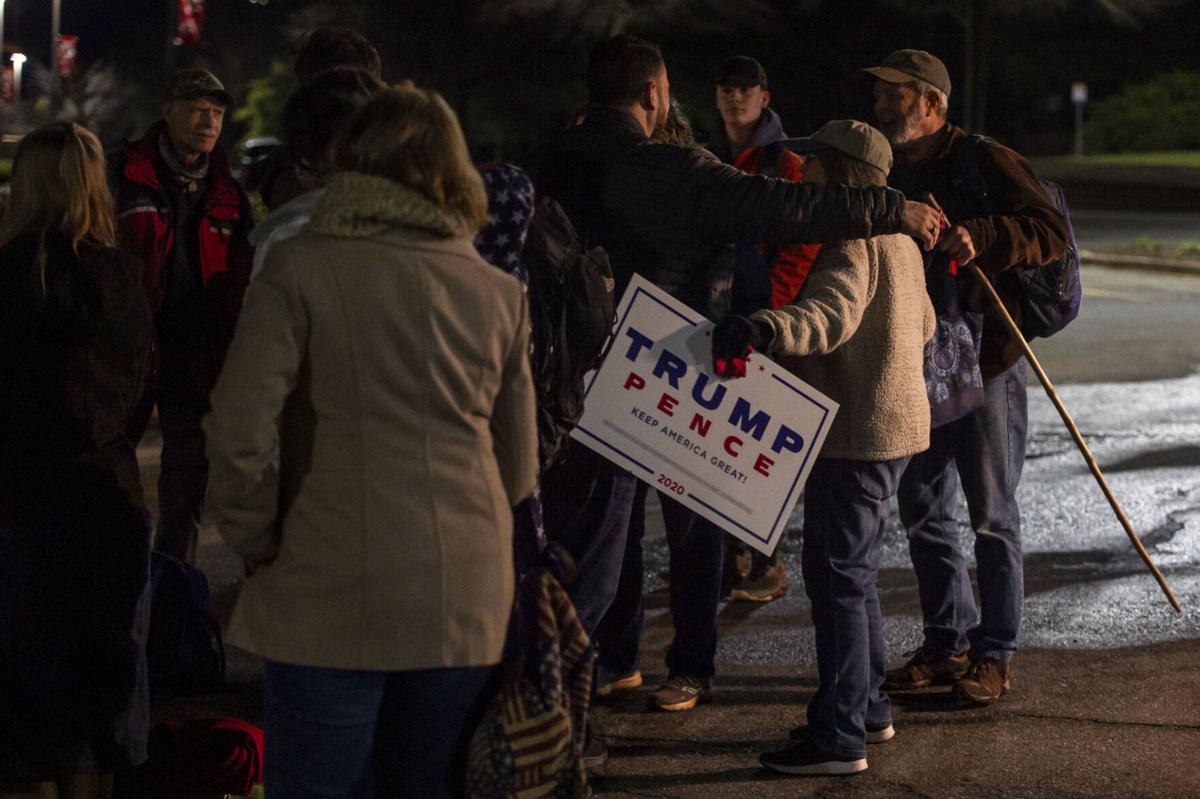 Supporters of President Donald Trump hug while waiting to board a bus at the Candlers Mountain Shopping Center to head to Washington D.C. to attend a protest on Wednesday, Dec. 6, 2021. 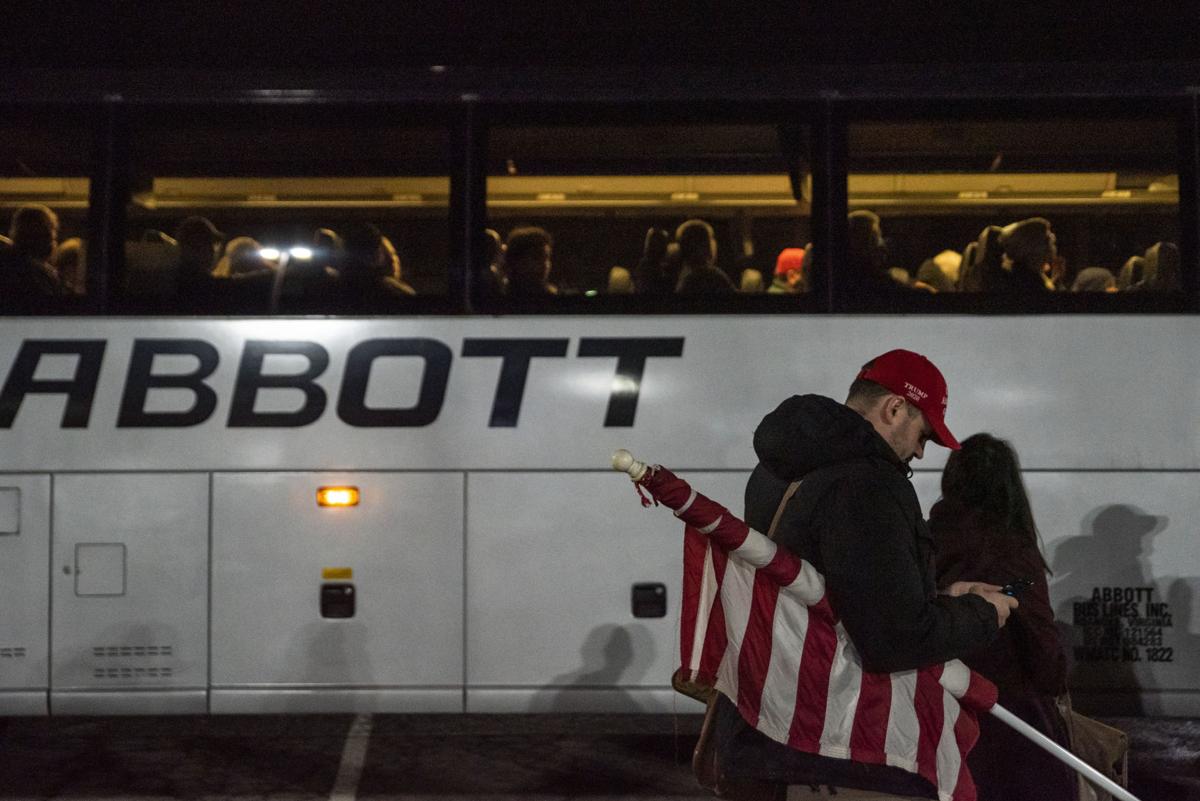 Holding a rolled-up American Flag, a supporter of President Donald Trump waits to board a bus at the Candlers Mountain Shopping Center to take a group of people to Washington D.C. to attend a protest on Wednesday, Dec. 6, 2021.

More than a week after the attack on the capitol in Washington, D.C., on Jan. 6, Campbell County resident Albert Wilson said his original observations stand true: some of the crowd who stormed the Capitol building were “exuberant Trump supporters.”

However, Wilson, who traveled from Lynchburg to attend the Save America March that day, holds the belief that others in the siege were left-wing plants from extremist groups.

“You can’t read people’s minds, you can’t read their hearts. You can only see their actions,” Wilson said. “There was a definite mixture, and I’m not sure what proportion it is.”

Wilson said he does not condone the violence or the storming of the Capitol and said the majority of those in D.C., like him, were “peaceful protesters,” exercising their First Amendment right to share their grievances with Congress.

Nelson County Democratic Chairman Larry Stopper, who was not at the rally, said he was “horrified” and “terrified” at the situation that led up to and unfolded as Trump supporters stormed the U.S. Capitol.

Stopper blames President Donald Trump for the violence at the Capitol, adding he fears an uptick in future political violence.

“I will tell you that I fear for this country. I fear for our democracy,” Stopper said.

Amherst County Republican Committee Chairman Vance Wilkins, who did not attend the Jan. 6 rally, said he believes the violence came from a “fringe” group of demonstrators and does not properly reflect those peacefully assembled who did not break the law while exercising free speech.

“That’s what we are supposed to do,” Wilkins said of the people presenting their grievances to the government. Wilkins, a former Virginia Speaker of the House, said past pro-Trump rallies have been peaceful.

Wilkins said he does not know of anyone from the Lynchburg area who went with the intent of stirring up violence and dissent. He said he believes Trump did not incite the riot and encouraged supporters to exercise their First Amendment rights to speak out against the electoral process that in recent months raised many issues to protest.

Christopher Terry, of Amherst County, attended the rally and disagrees with the violence that occurred, but said he personally doesn’t blame Trump for inciting the storming of the Capitol. He said he thinks some of those gathered, whatever their agenda was geared toward, were going to be disruptive no matter what. He said the mob does not reflect the peaceful display of patriotism many Americans showed.

It was peaceful near the Washington monument when Trump spoke, Terry said, and afterward the group he was with walked to the Capitol. He said he felt a tremendous sense of camaraderie and estimates he and his group stood a few hundred yards away from the Capitol to peacefully display their right to free speech.

Terry said he had no clear view of the chaotic scenes unfolding. He said he and the others in his group didn’t become aware of the violence until getting back on a bus at about 5:30 p.m.

Madison Heights resident Jim Thompson said publicly during an Amherst County School Board meeting Thursday he fully intended to be in Washington, D.C., on Jan. 6. Although he did not go, he said he wanted to be there to pray for the country, not to storm the Capitol and harm anyone.

Thompson quoted from the Bible where Jesus Christ told followers “to love your neighbor as yourself.”

“And we failed on that miserably,” Thompson said. “Republicans, Democrats and everything in between for the past five years and beyond. And I’m part of that.”

In a news release issued late Friday, the Amherst County Militia denounced the violence that has occurred over the past year, and voiced its support for law enforcement, our government and the “Rule of Law.”

“Due to the high probability of a provoked and orchestrated incident that would be used to target us and advance the Left’s agenda many Militias across the State of Virginia have agreed not to attend Lobby Day in Richmond, Virginia this year on Jan 18th, 2021,” the release said.

Signed “Amherst County Militia 1st Battalion, 90th Regiment,” the release said the Amherst militia would protest instead by not participating in Lobby Day, a day when citizens are able to petition their legislators for various causes.

Wilson said he doesn’t plan to participate in any upcoming rallies protesting the inauguration of President-elect Joe Biden.

“I’m just going to sit back and watch it, and let [Biden] self-destruct. It’s inevitable,” Wilson said. “It’s yet to be determined what kind of tyranny we are under, and we’ll find out pretty soon.”

Noting it will take much work, Wilkins said the GOP can still take the nation and Virginia back the right way, through elections.

“Right now we have the means to correct the situation through the ballot box,” Wilkins said.

Terry said he does not regret going to the event, but he regrets the chaos that erupted. He had been excited about peacefully supporting Trump and hearing him speak in person, which was a first for him.

“All political parties just need to be more accepting.”

Supporters of President Donald Trump hug while waiting to board a bus at the Candlers Mountain Shopping Center to head to Washington D.C. to attend a protest on Wednesday, Dec. 6, 2021.

Holding a rolled-up American Flag, a supporter of President Donald Trump waits to board a bus at the Candlers Mountain Shopping Center to take a group of people to Washington D.C. to attend a protest on Wednesday, Dec. 6, 2021.