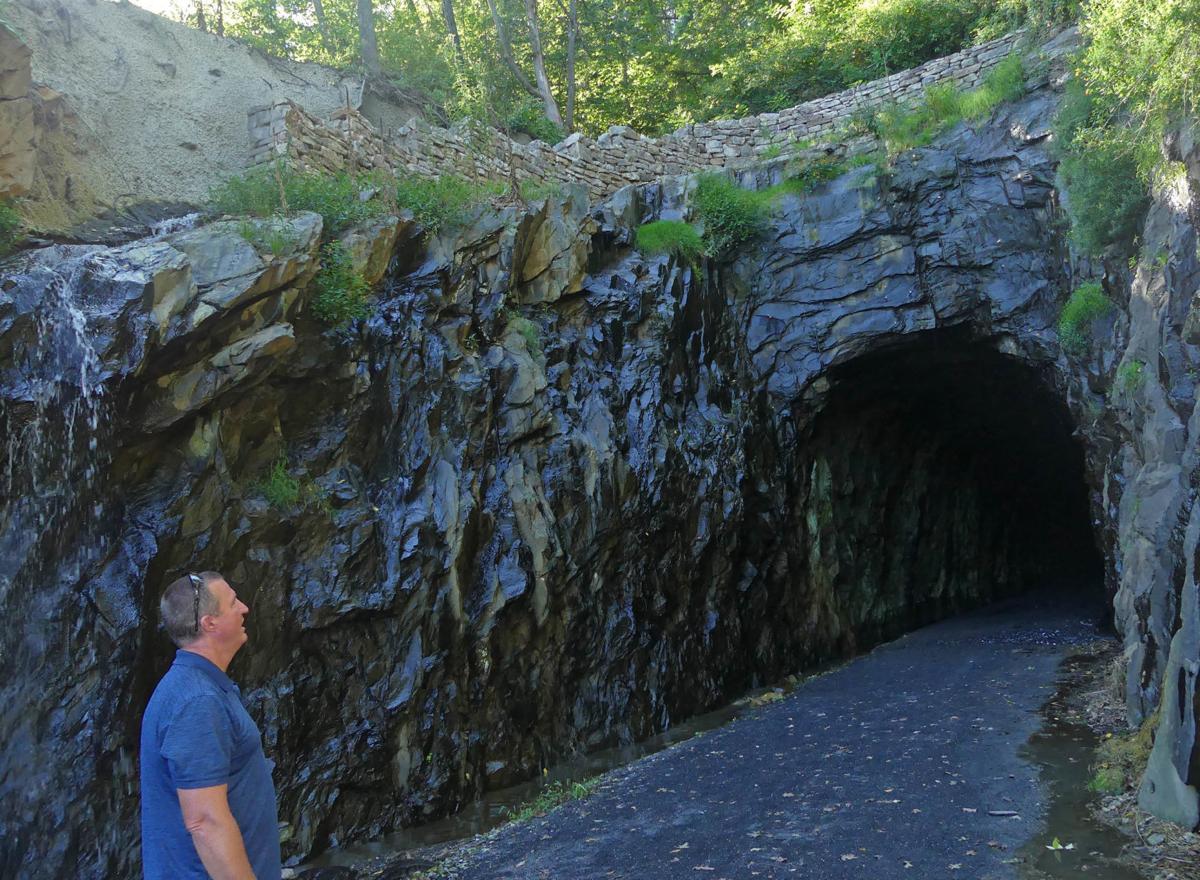 Dwayne Jones, the Director of the Waynesboro Parks and Recreation Department, has been on the committee that has worked to restore the tunnel since 2001. 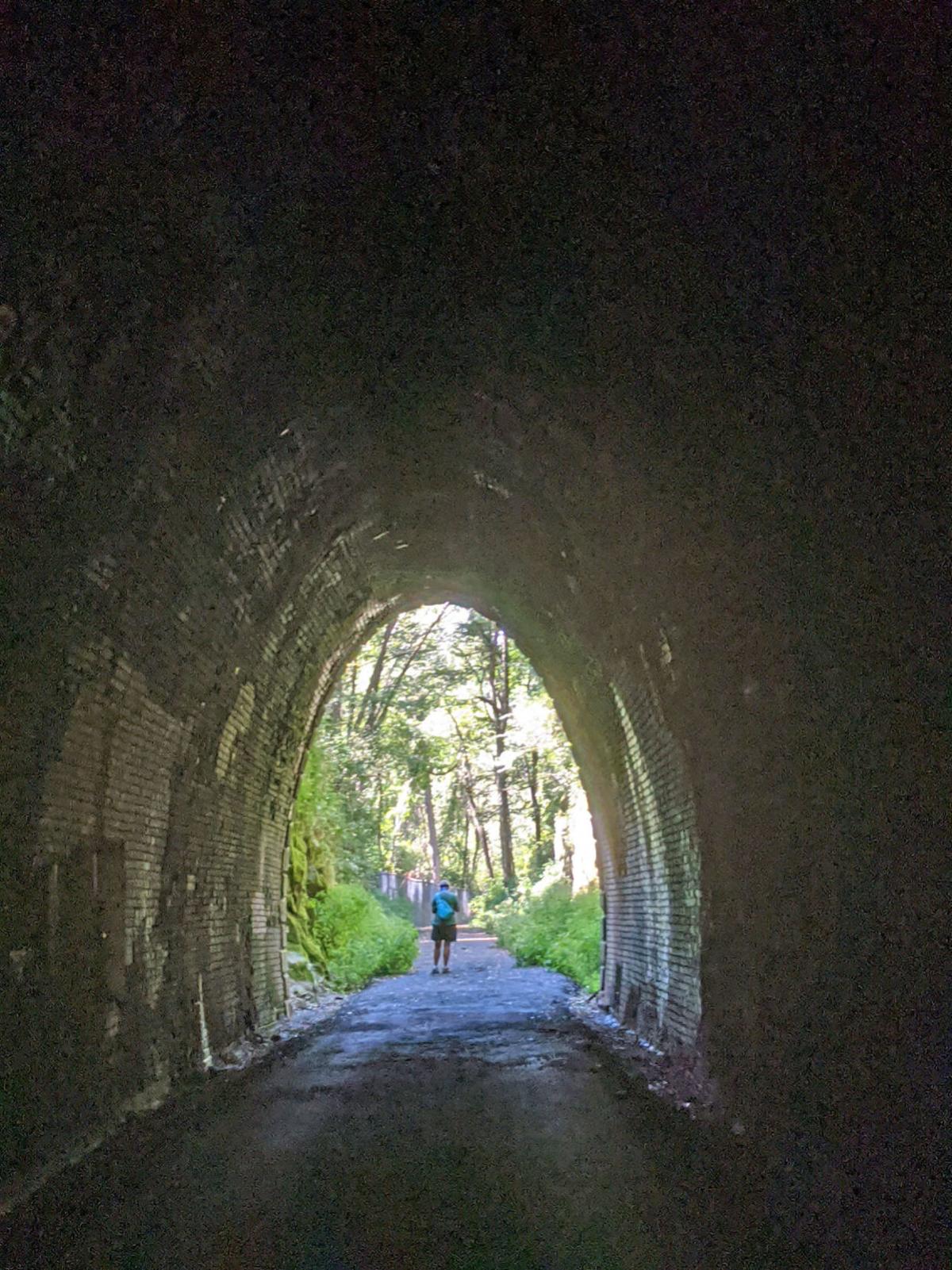 After traveling 4,273 feet through darkness, a hiker emerges into the light on the western side of the mountain in Augusta County.

AFTON — It might be a worn out cliché to some, but for a dedicated group of folks on both sides of Afton Mountain, there is, literally, light at the end of the tunnel — the Blue Ridge Tunnel that is.

The former railroad tunnel, known locally as the Crozet Tunnel after its builder Claudius Crozet, is nearly ready to open as a converted rails-to-trail pathway connecting Nelson and Augusta counties.

Recently, a limited number of visitors who have been instrumental in the restoration of the tunnel were allowed inside to get a glimpse of the project that has taken nearly two decades to complete. Until the official fall opening, however, visitors will have to wait to take the 4,273-foot walk under the mountain. Because the site is still an active construction zone, anyone caught trying to visit the tunnel now will be charged with trespassing.

Once open, the converted railway tunnel is sure to be a hit as a greenway. Situated as it is near Shenandoah National Park, the Blue Ridge Parkway, the Appalachian Trail and the U.S. Bicycle Route 76, it will be a must for outdoor enthusiasts both local and from afar. Future plans call for the western portion of the trail to extend into Waynesboro.

There are two parts to the Blue Ridge Tunnel story — construction and life as a railroad and restoration and conversion into a tourist attraction.

The railroad story begins in the 1840s with a new-fangled form of transportation making its way through Virginia until its arrival at the base of the Blue Ridge Mountains in Albemarle County. The Virginia General Assembly pushed to have a railroad go west over the mountains to Staunton with an eventual eye to a terminus on the Ohio River.

That railroad to Staunton, initially called the Virginia Central, become the Chesapeake and Ohio Railway (now CSX). It was not until 1873 that it reached the Ohio River.

In the meantime, the train from Richmond to Staunton started chugging over Afton Mountain in the mid-1850s. At the same time, Virginia’s public works engineer, immigrant Claudius Crozet, who had been an artillery officer in Napoleon’s army, designed a tunnel for trains to go through the mountain. It took nine years for hundreds of Irish immigrants and enslaved African Americans to perform the dangerous and physically brutal task of building the tunnel using hand drills and black powder.

The geology of the mountain almost proved Crozet’s undoing. The hard greenstone rock on the east was nearly impenetrable and the softer sandstone and shale on the west were so unstable that layers of brick had to be added to the walls and ceilings for support.

When it opened in 1858, the 4,273-foot long tunnel was North America’s longest. At its deepest, it was 700 feet below the surface of the mountain. The sophisticated ventilation and drainage systems designed by Crozet remain in place today and have earned the tunnel recognition as a National Historic Civil Engineering Landmark.

If that was the end of the story that would be a nice chapter in a history book, but nothing more. The tunnel served the railroad for 86 years until modern locomotives became too large for the 16-foot wide, 20-foot tall tunnel. In 1944, the railroad replaced the tunnel with a larger, parallel one.

In the 1950s, cement bulkheads were placed in the abandoned tunnel in an effort to store propane. The failed venture exacerbated drainage issues in the already deteriorating tunnel.

New life came in 2001 when visionaries in Nelson County saw potential as a public greenway. The county acquired the tunnel from the railroad and began gathering a host of partners to restore the tunnel and acquire easements for trails and parking. Thus was launched a two-decade project that will cost upwards of $6 million dollars.

In addition to Nelson County, major players in the public-private partnership have been the Virginia Department of Transportation, the Commonwealth Transportation Board, the city of Waynesboro, the Virginia Department of Conservation and recreation, Woolpert Inc., Fielder’s Choice Enterprises, Inc., the Whitesell Group, and the Claudius Crozet Blue Ridge Tunnel Foundation.

As the director of the Waynesboro Parks and Recreation Department, Dwayne Jones has been involved in the project since the beginning and has watched the restored tunnel come to life. Today, he serves as vice president on the Claudius Crozet Blue Ridge Tunnel Foundation that coordinates the project.

“This has been a passion of mine since 2001,” Jones said. “When we open there will be something for everybody. There is railroad history, a nice trail, nature and just a nice place to take a walk.”

The project will have a parking area in Afton and one just off U.S. 250 in Augusta County. The length of the trail from one parking area through the tunnel to the other is 2.35 miles, nearly a five-mile roundtrip. The trail is smooth with a crushed stone surface.

With just a few more final construction details to complete, Jones said the foundation is shooting for a public opening sometime this fall.

Dwayne Jones, the Director of the Waynesboro Parks and Recreation Department, has been on the committee that has worked to restore the tunnel since 2001.

After traveling 4,273 feet through darkness, a hiker emerges into the light on the western side of the mountain in Augusta County.