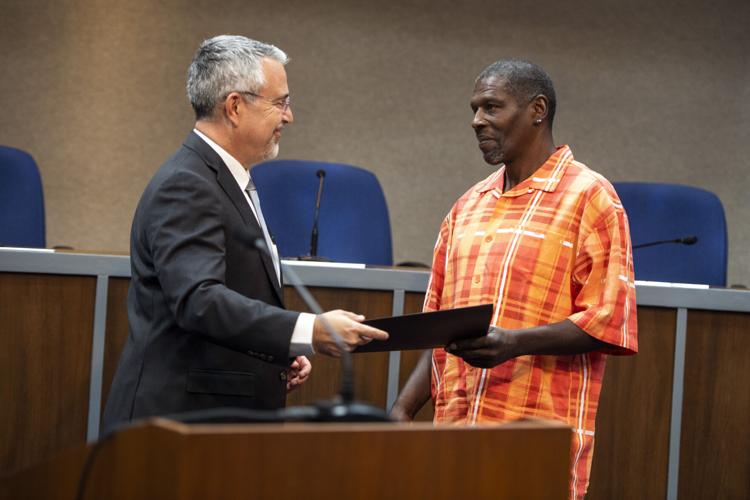 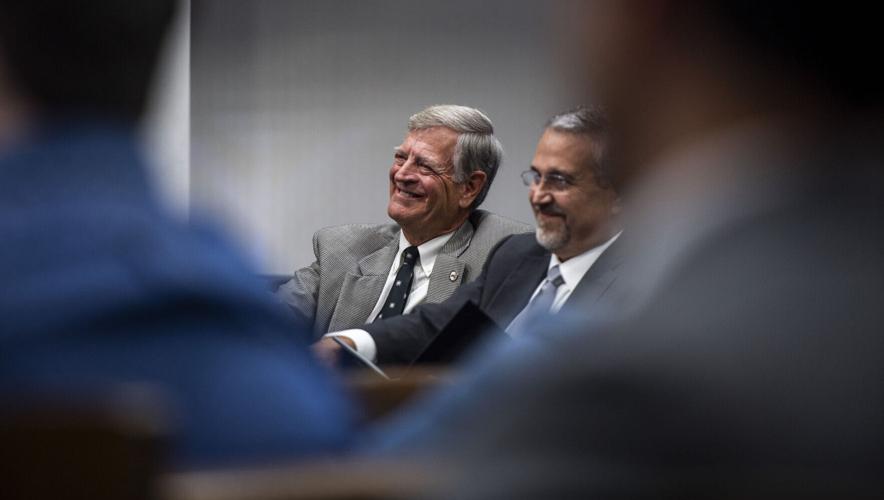 R. Edwin Burnette, retired judge and founder of the Lynchburg Drug Court, smiles during speeches given at Thursday’s graduation ceremony. 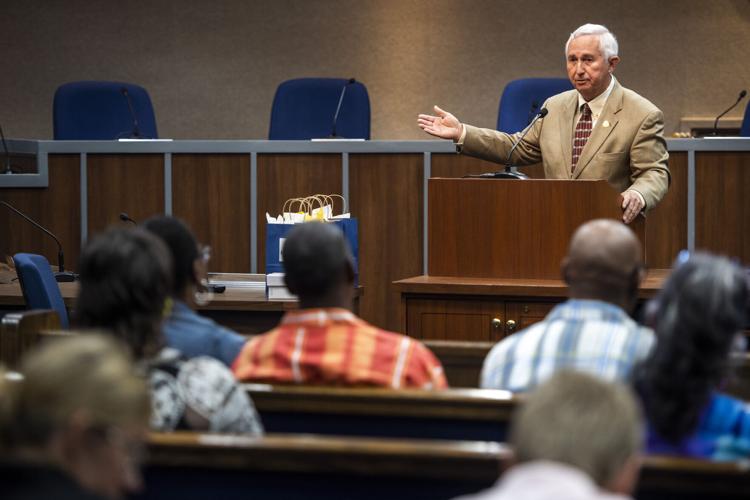 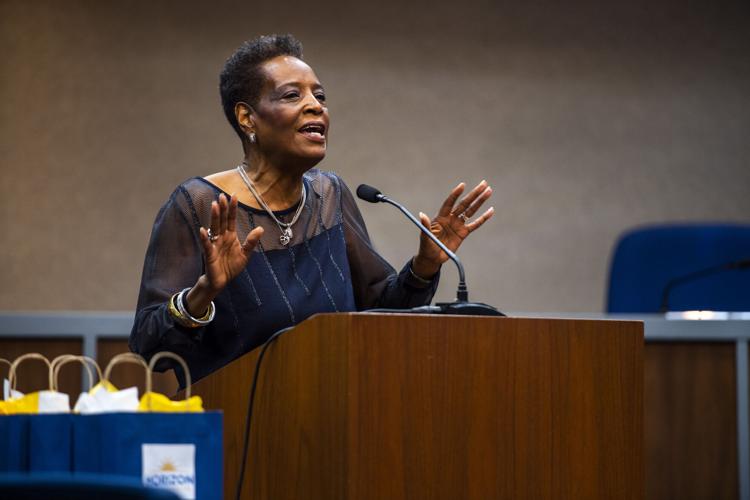 Debra Jefferson, with Horizon Behavioral Health and a drug court success story at over 20 years sober, offers words of encouragement and shares her story during the Lynchburg Adult Drug Treatment Court Graduation Ceremony at City Hall on Thursday, May 26, 2022. 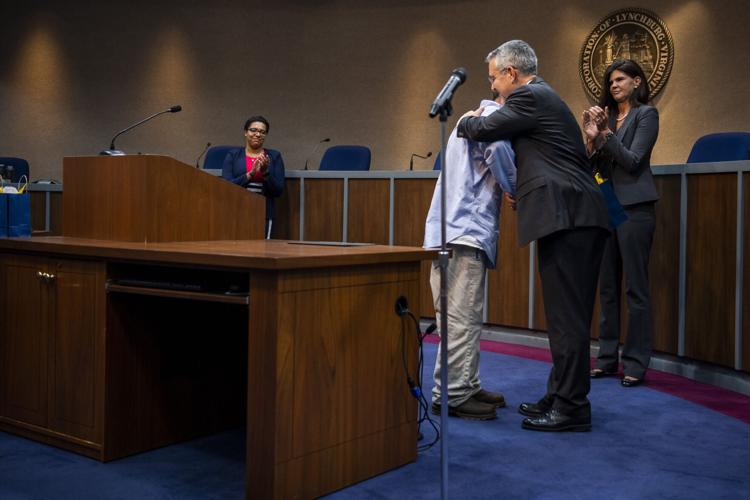 Judge J. Frederick Watson hugs Jerimiah Brooks after presenting him with his certificate of completion during the Lynchburg Adult Drug Treatment Court Graduation Ceremony at City Hall on Thursday, May 26, 2022. 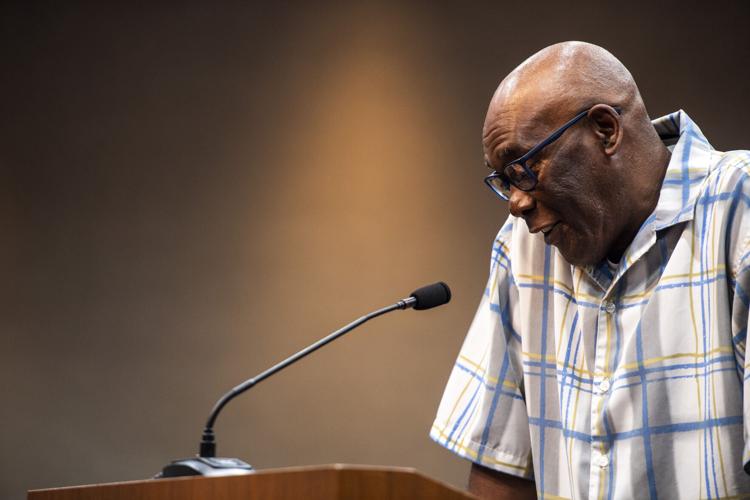 Wesley Brogdon speaks after receiving his certificate of completion during the Lynchburg Adult Drug Treatment Court Graduation Ceremony at City Hall on Thursday, May 26, 2022. 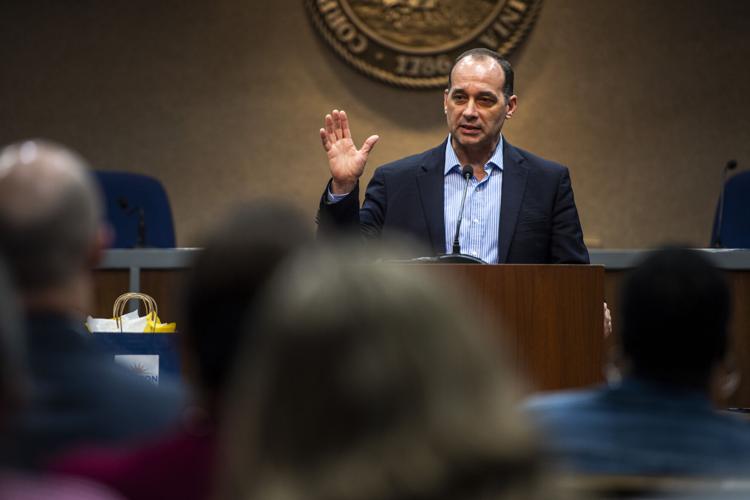 Former Lynchburg Circuit Judge R. Edwin Burnette served as a judge of several different courts over more than 40 years. But it wasn’t his time on the bench that showed him the true power of addiction.

Instead, Burnette said, it was when he saw it firsthand with a family member that he realized he needed to address the issue.

“That’s when I realized that addiction was not something that someone does to feel good ... addiction takes over so you do this so you don’t feel bad,” Burnette told a crowded Lynchburg City Council Chamber on Thursday night in Lynchburg City Hall.

It was Burnette’s family member’s own struggle with addiction he said led him to help launch the Lynchburg Adult Drug Treatment Court in 2017. And on Thursday night, five graduates of the drug court were honored for their accomplishment.

Wesley Brogdon, Jerimiah Brooks, Marvin Hubbard, Kymauni Moore and Jacquawn Carter were celebrated by the program’s support staff, local judges, elected officials and family as they marked off a major milestone in their road to recovery.

Brogdon told the crowd gathered in City Hall he was skeptical of the drug court upon first hearing about it. But upon completion, he said the program changed his life for the better.

“I didn’t know what was going to happen at the end,” Brogdon said, “Judge [J. Frederick] Watson said to try it; I didn’t want to try at first. I still wanted to hang out on the streets and stuff.”

When facing certain drug charges, individuals can plead guilty to the offense and opt into the program that requires close monitoring and routine check-ins and therapy to treat their addiction. The options most face either are incarceration or drug court.

Those accepted into the program work with Horizon Behavioral Health and officials from the court system to receive step-by-step rehabilitation that helps them along the way.

Brogdon said he went through the process without telling anyone but his mother, telling people he was going to “school.” And his “teachers” at the drug court are the ones he credited with getting him on the right path.

Now that he’s graduated, Brogdon is looking forward to attending conferences in Richmond, South Carolina and even Seattle to tell his story of pushing through addiction to make a better life for himself.

Watson, the current presiding judge over the drug court, said Brogdon “isn’t just in recovery, he’s now leading. He’s a leader in the field of recovery,” now that he’s working with other people to get them on the same path as himself.

Brooks, who Watson said came to drug court “determined that he was going to kick his addiction,” did exactly what he told Watson he set out to do from day one.

Brooks said, “Where I was a few months back, I’m not that person anymore.”

Brooks, he said, never had that problem, and came in with an upward trajectory from day one.

“I appreciate every single one of you that helped me get on the right track,” Brooks said, looking to a large group of support staff from the program.

“When we talk about trajectories, Marvin was one of these,” Watson said as he waved his hand up and down, motioning like a roller coaster.

“Early on, I had real concerns about Marvin ... but once it clicked for Marvin, it clicked and his trajectory all of a sudden became a straight line.”

Hubbard agreed with Watson, saying drug court was the “rough road” and he didn’t think he was going to make it to the end.

“I just turned 65 years old and for the grace of God, I am here today,” he said.

Hubbard recalled when he first needed the program, and he approached his attorney, Lynchburg Public Defender Aaron Boone, telling him, “Going to jail isn’t going to help me. I need help.”

Hubbard said he didn’t wait and immediately reached out to get into a recovery program, which ultimately led to him getting into drug court.

Moore and Carter, the other two graduates, were unable to make the ceremony Thursday, but they still were recognized by Watson and others in the court for their perseverance through what Burnette said is a tougher option than incarceration.

“You chose the much tougher road,” Burnette said. “It’s much easier to take your time, sit in a jail, watch TV and have three squares. But you chose a much more challenging path.”

“It’s a heck of a lot better than a map,” he explained. “I can give somebody a map and say, ‘Figure it out,’ but isn’t it much nicer when you’re in the car and it says, ‘In 500 feet, turn right onto Church Street?’ That’s what sets this apart.”

It’s all about getting people back on the path they have strayed from, according to Burnette.

Both of the judges at the ceremony recognize the need for the drug court, which is why they are popping up in several other localities in the area.

In Nelson County, officials just received approval from the Virginia Supreme Court to launch a drug court. In Bedford County, there is a family drug court docket.

All of this is an effort to curb drug and substance addiction and keep people from behind bars long term.

“Some people think that going to drug court is a way to avoid jail,” Watson said, “but ... we have drug court participants through our sanctions in the drug court, maybe have spent more nights in jail than they would have had they just pled guilty, been convicted and went about their way.”

Burnette said “we can’t incarcerate our way through that problem,” talking about the crisis of drug and substance addiction.

“I have people in front of me [in court] that I’ve seen more often than my family, and we’re on a first name basis. They could not stay clean.”

Rep. Bob Good and Del. Wendell Walker delivered remarks during the ceremony, imploring the graduates to lean on faith in God and their support team to stay on the right path to recovery, as graduation is just another milestone in the journey.

“We are all a reflection of those who poured into our lives, invested in our lives,” Good told the graduates. “By graduating, this has helped to give you a new future as you begin again. It’s not easy to turn away from addiction, but you’re demonstrating courage and resolve by doing what you’re doing tonight.”

Walker added while the program has put the graduates “on first base, you’ve got to get around the other bases to score here. But you’ve started the right process here.”

Debra Jefferson, a worker for Horizon Behavioral Health, the organization that plays a huge part in establishing treatment plans for those in drug court, said during her remarks that addiction is a “disease” and it “doesn’t discriminate, or make a difference where you come from.”

Jefferson, who endured a 28-year battle with addiction herself, told graduates to “hold onto this gift” and lean on the support they will get.

The graduates also were invited to be a part of the drug court’s alumni program, which will allow them to connect with previous graduates, as well as current students that are in the program.

“This is a gift, and it can maintain and stay a gift as long as you treat it that way,” Jefferson told the graduates in her remarks.

“And I know you can do it because if a street urchin like me can ... you can too.”

A 17-year-old boy was charged with multiple felonies in connection with a carjacking Thursday evening in Lynchburg, police said.

Final defendant in 2017 murder of Lynchburg teen is sentenced

Lynchburg man arrested after shots fired, no one injured

A Lynchburg man was arrested after shots were fired in the city Wednesday evening, but no one was hurt, and no property was damaged, police said.

R. Edwin Burnette, retired judge and founder of the Lynchburg Drug Court, smiles during speeches given at Thursday’s graduation ceremony. 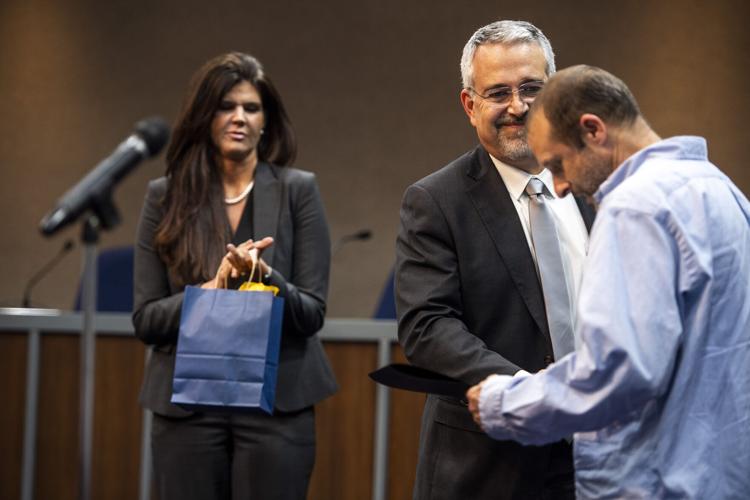 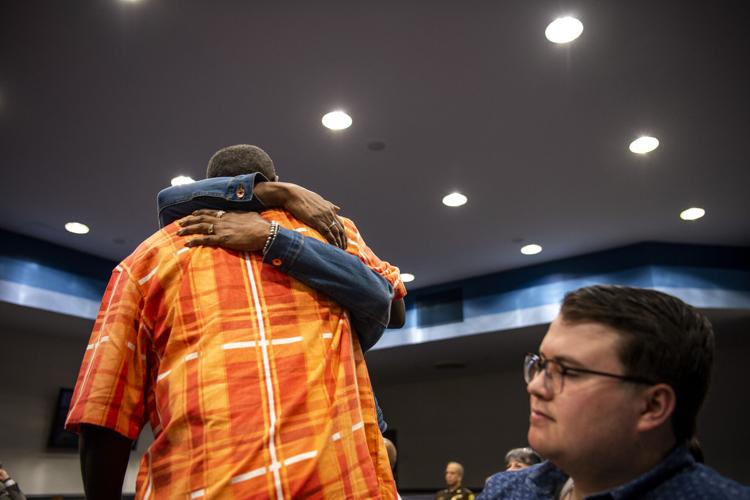 Marvin Hubbard is embraced by his fiancée, Sherry Burford, during the Lynchburg Adult Drug Treatment Court Graduation Ceremony at City Hall on Thursday, May 26, 2022. 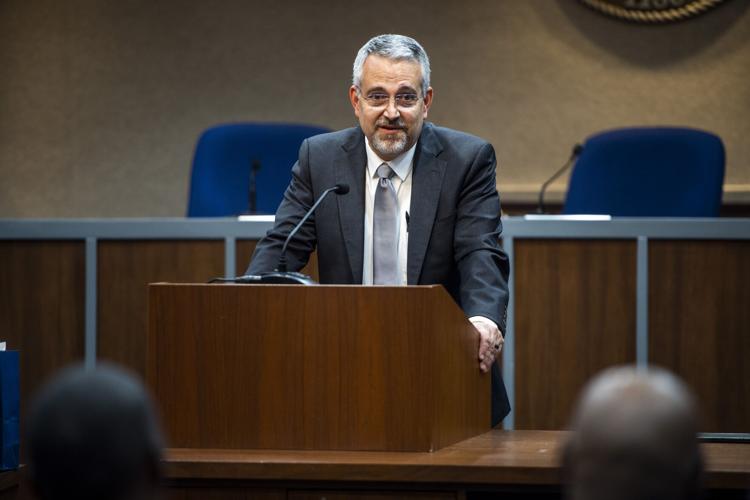 Debra Jefferson, with Horizon Behavioral Health and a drug court success story at over 20 years sober, offers words of encouragement and shares her story during the Lynchburg Adult Drug Treatment Court Graduation Ceremony at City Hall on Thursday, May 26, 2022.

Judge J. Frederick Watson hugs Jerimiah Brooks after presenting him with his certificate of completion during the Lynchburg Adult Drug Treatment Court Graduation Ceremony at City Hall on Thursday, May 26, 2022.

Wesley Brogdon speaks after receiving his certificate of completion during the Lynchburg Adult Drug Treatment Court Graduation Ceremony at City Hall on Thursday, May 26, 2022. 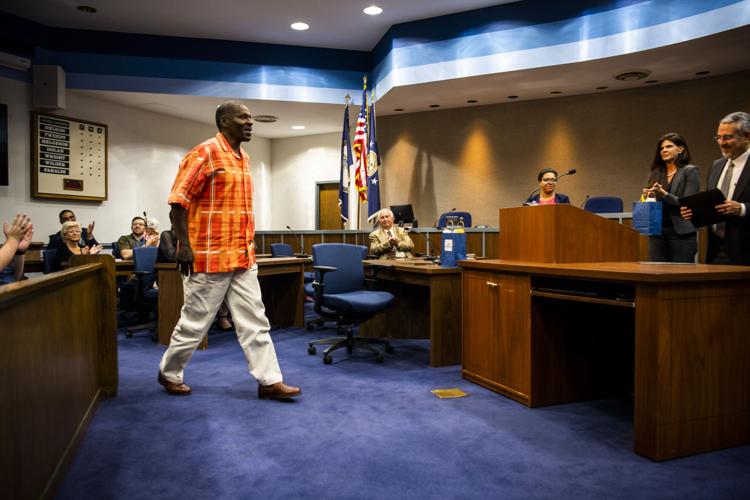 Marvin Hubbard walks up to receive his completion certificate during the Lynchburg Adult Drug Treatment Court Graduation Ceremony at City Hall on Thursday, May 26, 2022. 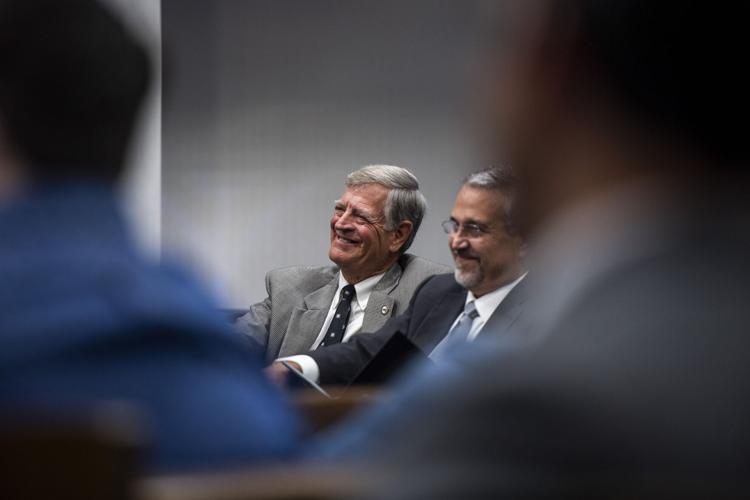 R. Edwin Burnette, retired judge and founder of the Lynchburg Drug Court, smiles during speeches given at Thursday's graduation ceremony.