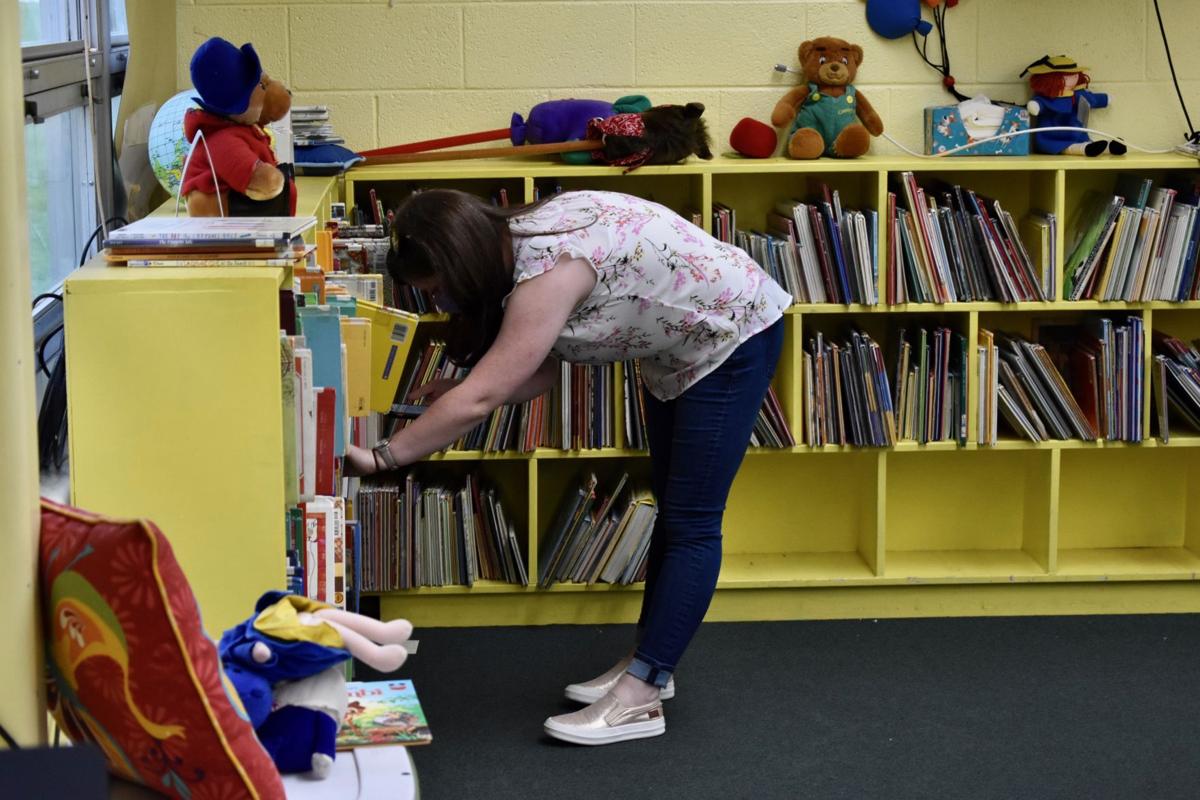 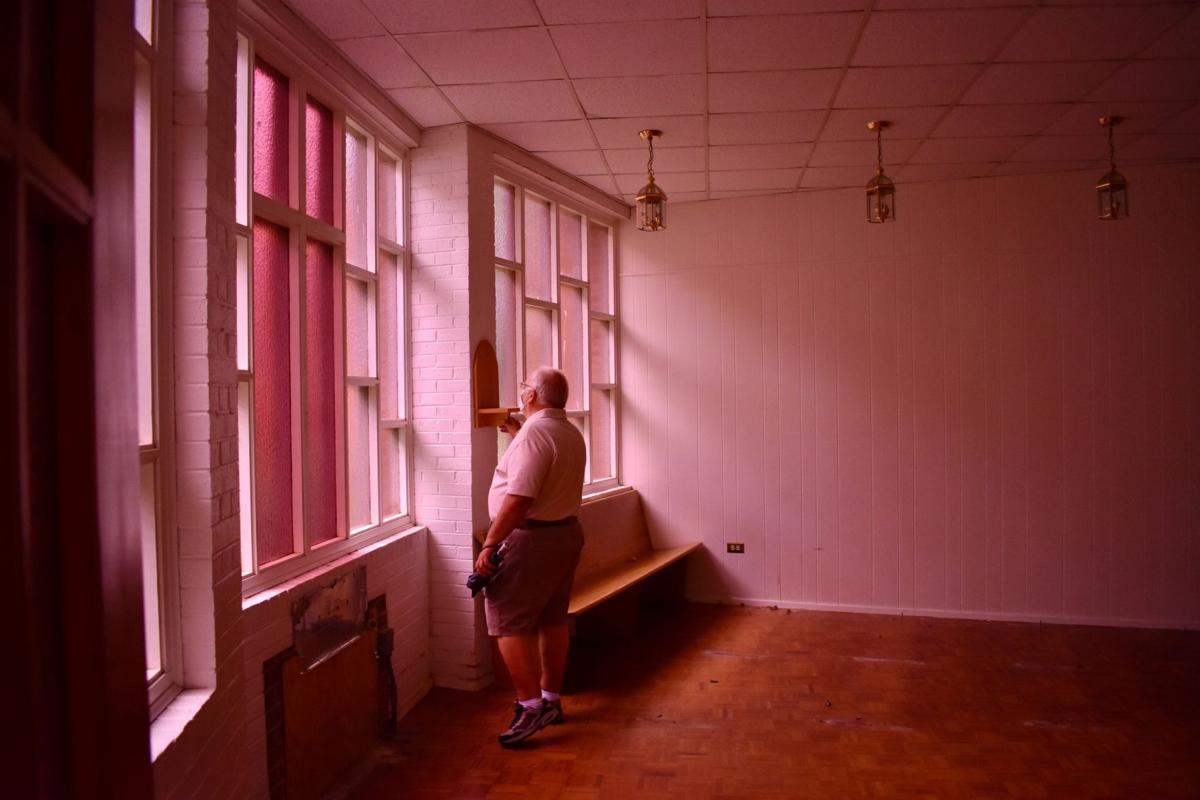 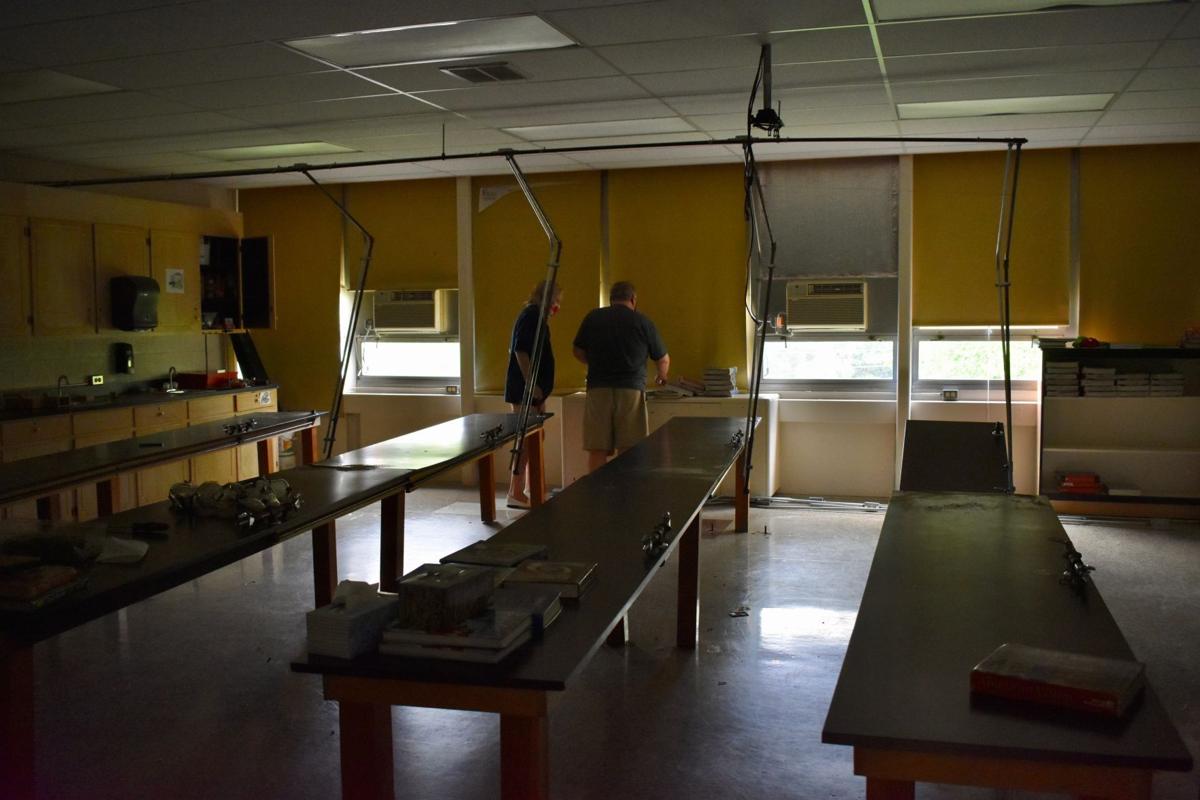 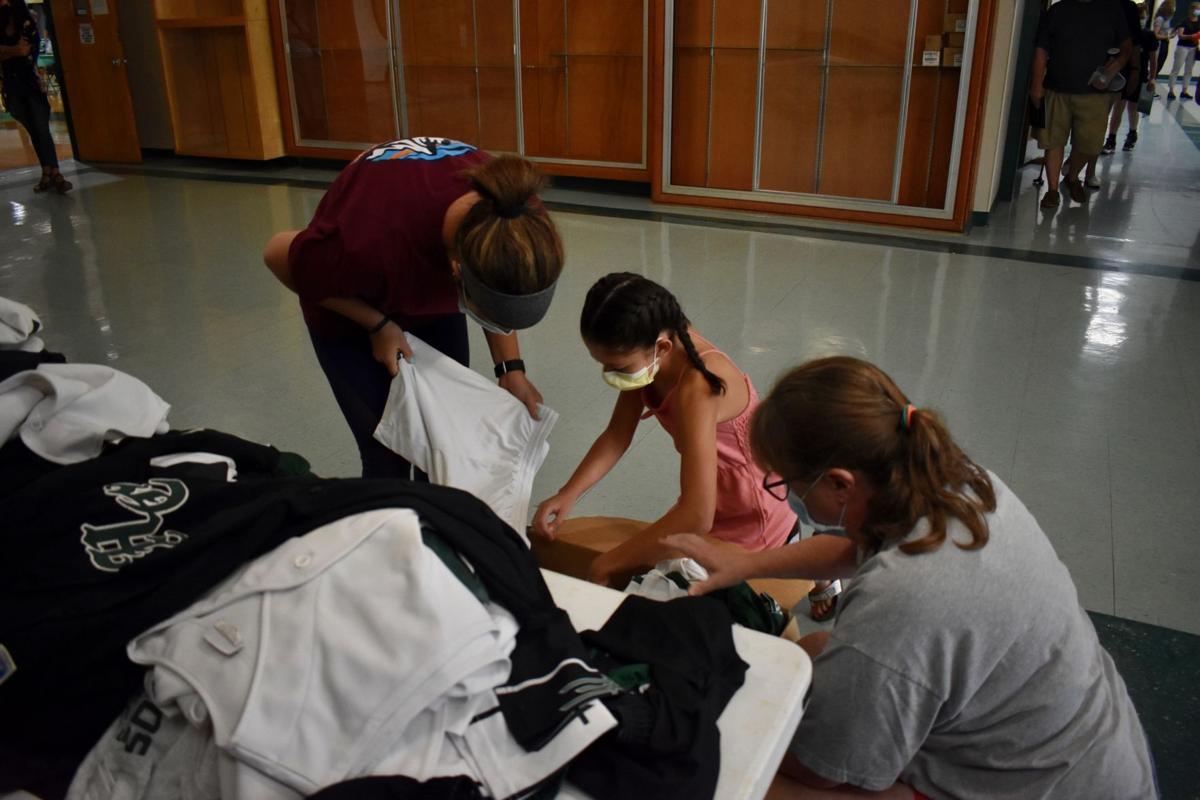 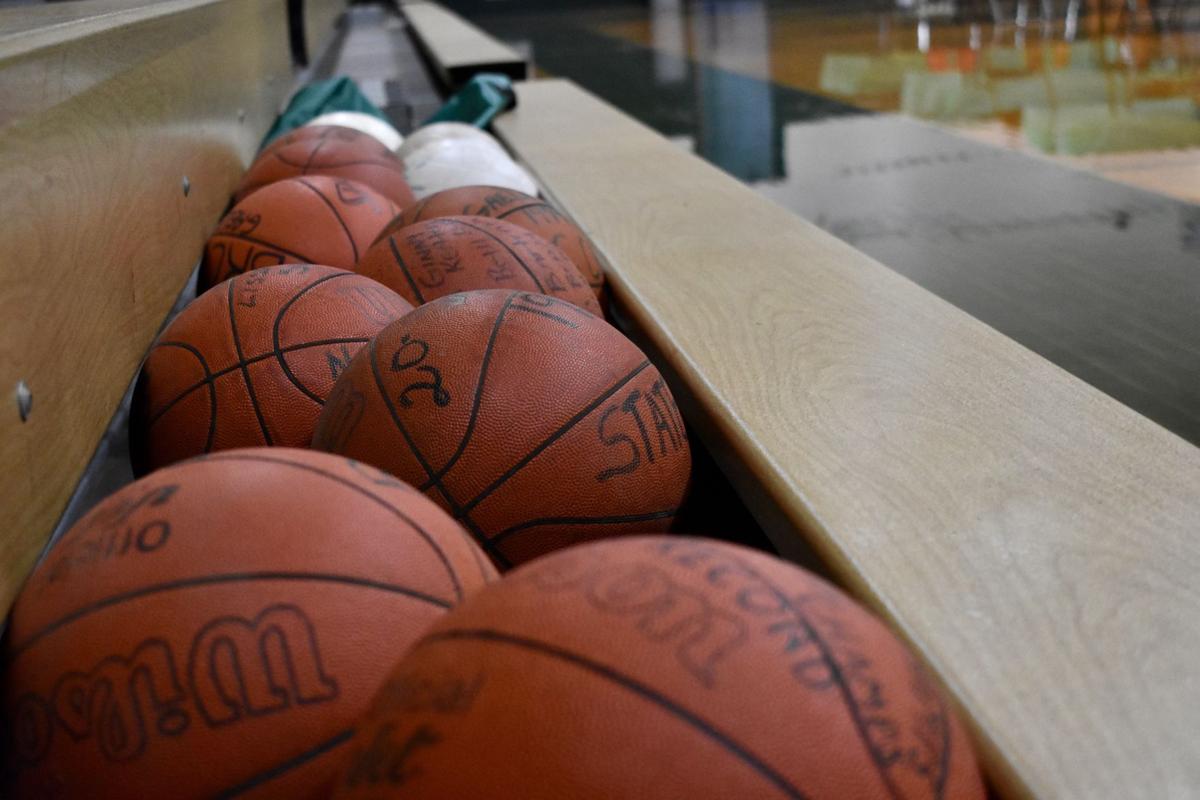 Basketballs fill one row of the bleachers at Holy Cross Regional Catholic School. At a reunion event Saturday, Aug. 15, 2020, former students and alumni were welcomed to take pieces of memorabilia from the school. 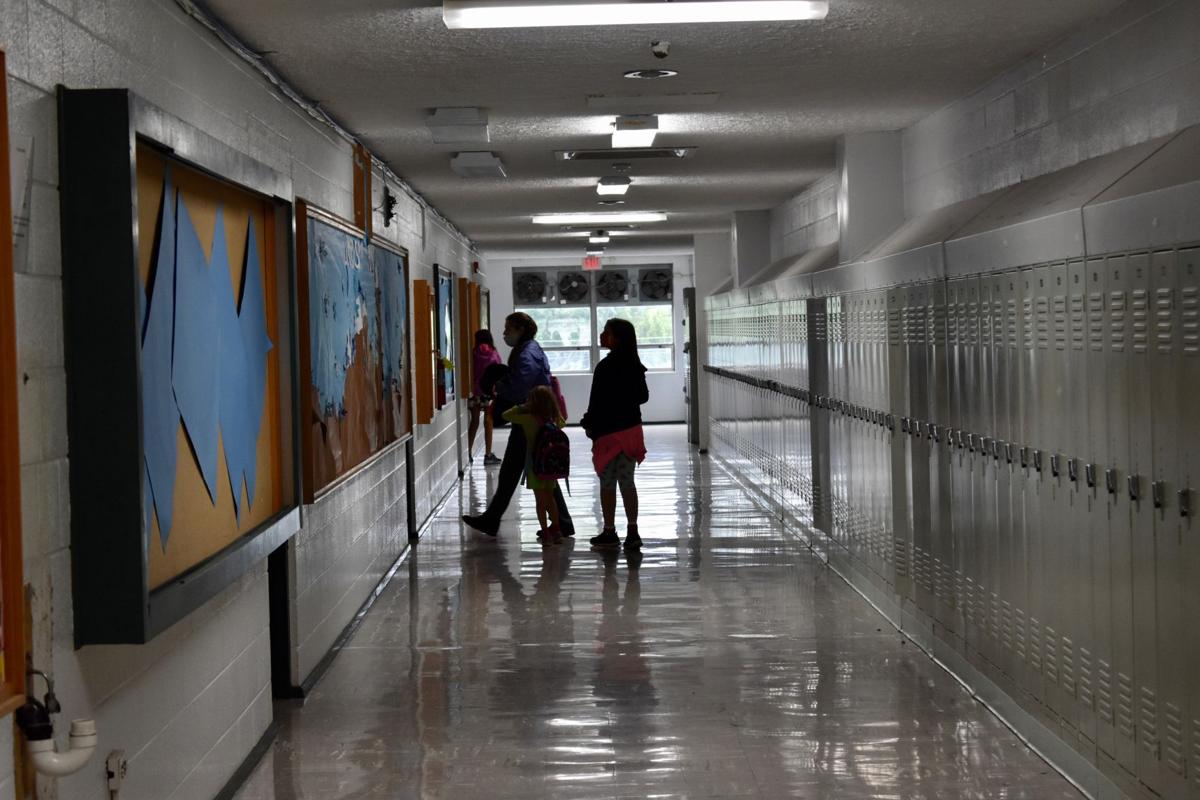 Members of the Holy Cross Regional Catholic School community roam the school's empty halls, reminiscing on their time at the school, which closed this year.

In June, members of the school’s 141st — and final — graduating class received their diplomas. The Catholic Diocese of Richmond announced in November 2019 the school would close at the end of the 2019-20 school year because of financial and enrollment struggles.

Lenny Frye, member of the class of 1972 and recent middle school girls basketball coach, said alumni from the Lynchburg area, as well as those from outside the state, flocked to Saturday’s event. The school’s most recent students picked up their yearbooks and said final goodbyes to their teachers, while older alumni reminisced on their decades of memories at the school.

At the school’s entrance, athletic uniforms, pom-poms and other school memorabilia was piled on top of foldable tables and overflowing out of boxes on the floor. Signs taped to the tables read “TAKE.”

Frye said he hoped students and alumni would grab a jersey or T-shirt as a way to keep pieces of the school alive in the community and across the states. For the past 10 or so summers, Frye said, the Holy Cross Alumni Social Club has organized a reunion at the school. With the school closing, Frye said they wanted to hold one final reunion at the building, but COVID-19 forced them to make some adjustments, such as socially distanced seats and a face covering requirement.

Frye’s siblings, nieces, nephews and children all graduated from Holy Cross. For 51 consecutive years, at least one member of Frye’s family attended the school. His youngest daughter graduated in 2004, he said.

“This school is so deeply rooted in this community,” Frye said. “Generations and generations of families are connected here.”

While most of the school’s resources have been moved to other catholic schools in the state, such as computers, teaching materials, scoreboards, water fountains and even the popcorn machine from the concession stand, Frye said some memorabilia went to alumni and students.

Frye said he found homes for the school’s championship trophies from various sports and years that once filled cabinets in the school’s main hallway.

Tom Concannon, former physics and earth science teacher at Holy Cross, walked around Room 206 where he taught. He said the room is much emptier than it was when he still was teaching in it earlier this year.

“I just wanted to walk through one last time,” he said. “It’s sad.”

Concannon pointed at a broken table lying on the classroom floor.

“I always told my students not to sit there,” he said. “I knew that thing was about to fall.”

Concannon said he hopes whoever buys the building will “put it to good use.”

Dave and Charlene Lewandowski peered in the school’s chapel Saturday. Their daughter graduated from the school in 2008 after attending since kindergarten. From field trips to school events, Dave Lewandowski said he has many memories in the building.

“It’s weird being back,” he said. “It’s been a while since I’ve stepped foot in this school; I just wish these circumstances weren’t what brought us back.”

Vicki Zechini Barrett, a member of the school’s class of 1973, said she hopes the community remembers the school’s 141-year history and effect on the town.

“This school is very much part of the history of Lynchburg,” she said. “I hope it’s remembered for that.”

Greaney, like the rest of the Holy Cross community, said she was sad to see the doors close. Greaney said she’d been teaching music at the school for six years.

Saturday’s event, while sad for many, brought a smile to Greaney’s masked face as it gave her the chance to see her most recent students for the first time in months.

“It’s awesome to see everyone here saying goodbye,” Greaney said. “It just shows what an impact this school had.”

Photos: Holy Cross through the years

Photos: Holy Cross through the years

Second-grade teacher is behind beloved tradition at Holy Cross

Suspect on the run in fatal shooting of 3 in Texas

Suspect on the run in fatal shooting of 3 in Texas

Together, Lynchburg City Schools and public schools in the counties of Amherst, Bedford, Campbell and Nelson have reported 953 positive cases of COVID-19 since their school years began.

For the second year in a row, Lynchburg-area high schools won’t be holding school-sponsored proms.

Randolph College's annual Science Festival will be held virtually this year, and begins this week.

Beginning April 20, third through fifth graders currently in hybrid learning will begin attending school in person four days a week — an increase from the current two days a week schedule.

Virginia, school districts say no, so parents staging their own proms for high schools in Henry, Patrick counties -- out of state

Virginia pandemic restrictions make it impossible to hold a traditional state prom -- so parents are crossing the state line to do it themselves.

As of Friday, Virginia has seen 632,625 cumulative cases of COVID-19 — an increase of 1,542 since Thursday, according to the Virginia Department of Health.

Bedford County Public Schools is exploring three options for in-person graduation ceremonies, all of which allow at least two guests per graduate.

Basketballs fill one row of the bleachers at Holy Cross Regional Catholic School. At a reunion event Saturday, Aug. 15, 2020, former students and alumni were welcomed to take pieces of memorabilia from the school.

Members of the Holy Cross Regional Catholic School community roam the school's empty halls, reminiscing on their time at the school, which closed this year.