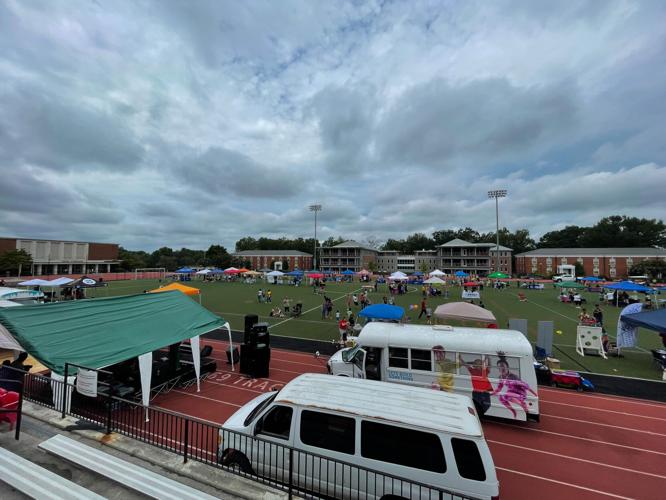 A birds-eye view of Saturday’s back-to-school event that was coordinated by One Community One Voice and University of Lynchburg, held at UL’s Shellenberger Field. 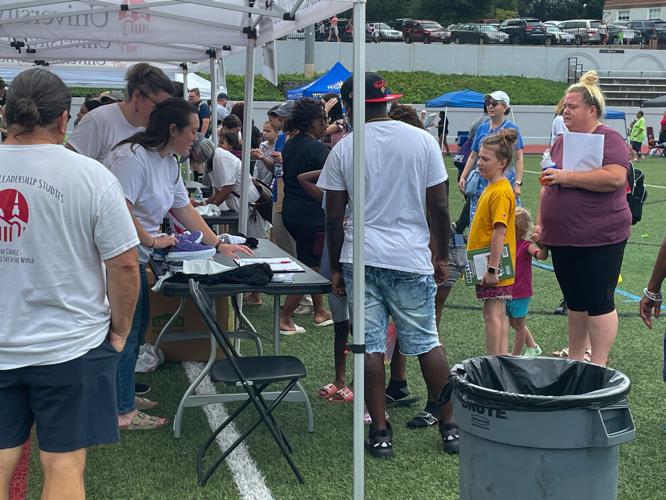 Parents and students gather at a table, awaiting shoes and school supplies. 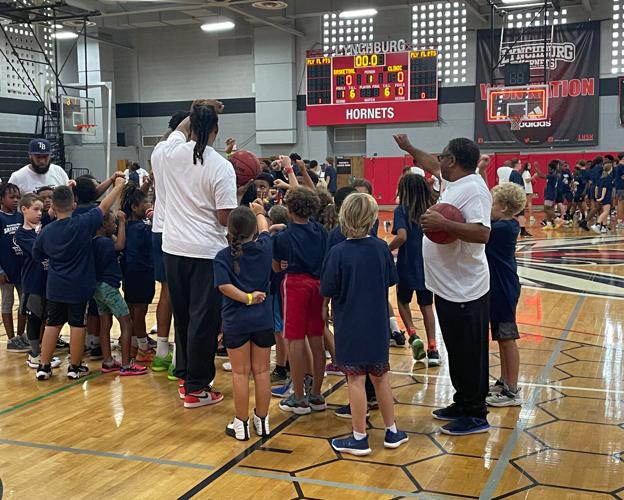 Kids gather around coaches after a drill in basketball camp during an annual back-to-school event hosted by One Community One Voice and University of Lynchburg. 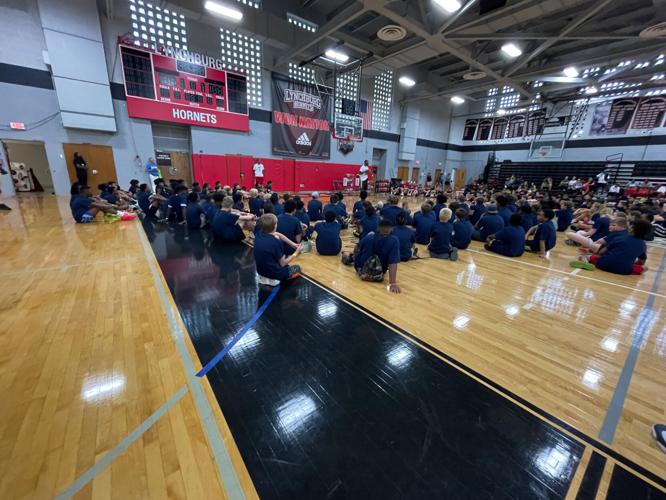 The University of Lynchburg hosted an annual back-to-school event Saturday, sponsored by One Community One Voice, to help kids and families prepare for the upcoming school year.

Nonprofits and schools from the area set up tents at UL’s Shellenberger Field as families and students visited each table to receive information, participate in activities and receive prizes. Kids received free books, school supplies, shoes and T-shirts. Meanwhile, more than 200 children participated in a basketball clinic inside the school’s gymnasium.

James Camm — executive director of One Community One Voice and pastor of Living Word Ministries — said the event has been held for the past five years.

One Community One Voice is a nonprofit organization that started in 2016.

“Our motto is changing lives one family at a time,” Camm said. “We believe in touching from the child to the parent in any way.”

Camm organized the event, as he and the group invited local area schools and nonprofits to participate. A total of 64 nonprofits attended.

Todd Blake, executive director of Lynchburg’s Parkview Community Mission, said it felt good to come alongside other nonprofits in the community and share information and resources with families in the Lynchburg area.

“I think it’s great. What I love about the nonprofit community of Lynchburg is just the way we all work together,” Blake said.

Parkview Community Mission is a nonprofit with six programs, with an aim to restore the lives of families and communities with a focus on serving immediate concerns such as food, clothing and any other needs people might have.

Blake said he hopes that families, from this event, know that “Lynchburg loves them and their students.”

Camp Kum-Ba-Yah had a tent at the event also. The camp on Boonsboro Road offers 47 acres of natural play education space for all ages.

“We always want to be a part of the community and serve the community,” said Amy Bonnette, executive director of Camp Kum-Ba-Yah.

While students and families were learning about resources and receiving school supplies on Shellenberger Field, more than 200 kids participated in a basketball clinic inside Turner Gymnasium, learning basketball fundamentals and participating in drills.

UL Men’s Basketball Head Coach Hilliary Scott organized the camp. He said it all started by reaching out to local coaches and mentors in the city and surrounding areas.

Scott said everyone stepped in and wanted to help, with no hesitation.

“I think that just says a lot about our folks that we have here in our town and our surrounding areas. Always willing to help kids and really furnish an area ... and really use sports as a way to join people together,” Scott said.

The coach stressed it was a lot of people — including One Community One Voice, coaches and community members — who came together to make the basketball clinic possible.

“This means everything to me, being a head coach here at Lynchburg for 14 years, born and raised here,” Scott said. “To have our community come out and have all of these kids come out, especially come to our campus, clinic and our facilities on campus, man, this means the world to me.”

Originally, Naismith Memorial Basketball Hall of Famer Dominique Wilkins was scheduled to attend but was unable to due to family circumstances, Scott said.

Jared Harrington — an Albany State University graduate and basketball player for NBA Africa for the past four years — stepped in and led drills and stretches for the kids at the clinic.

He said the day had been “awesome.”

“For a guy like me who’s been a professional the last four years, I love coming back just to support and be a helping hand anyway I can,” Harrington said.

Harrington said it’s important for him to give back and help the youth because a lot of times, kids don’t have the best access to professional athletes.

Ultimately, he just wants them to have fun and enjoy the game.

“I don’t want them to think about basketball as a job; I just want them to keep the pure love for it,” Harrington said. “I want them to lock in from a novice standpoint instead of taking the game so seriously.”

University of Lynchburg President Alison Morrison-Shetlar said she had never been in a community that is so supportive in making a difference in the lives of others.

“For me, the important thing is that all of these nonprofits and businesses come together and support our community in unprecedented ways,” Morrison-Shetlar said.

Magazine names Lynchburg one of 25 best college towns in US

The city of Lynchburg has been named one of the 25 best college towns in the United States by “Travel & Leisure” magazine.

The Intervention Design Specialist model within Bedford County Public Schools has cut student disciplinary hearings and out of school suspensions in half since the initiative launched in 2019. Drop-out rates at Jefferson Forest High School alone have been reduced by 50% over the past few years.

The unique IDS model is designed to be preventative and proactive rather than reactive and punitive. Intervention and support can help students avoid escalation of behaviors that might result in stronger discipline like suspension.

Only half of Lynchburg public schools receive full accreditation

Only half of Lynchburg City Schools’ 16 schools achieved full accreditation from the Virginia Department of Education, according to accreditat…

After the recent release of Standards of Learning (SOL) scores across the commonwealth, Lynchburg City School officials have rolled out a plan…

A birds-eye view of Saturday’s back-to-school event that was coordinated by One Community One Voice and University of Lynchburg, held at UL’s Shellenberger Field.

Parents and students gather at a table, awaiting shoes and school supplies. 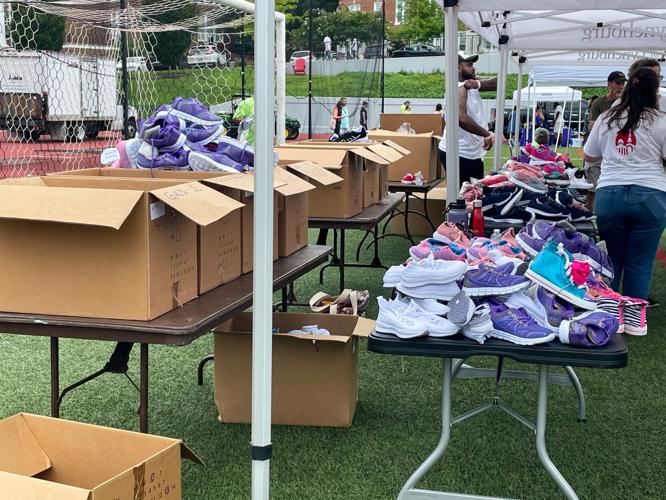 Boxes of shoes were donated for the annual back-to-school event.

Kids gather around coaches after a drill in basketball camp during an annual back-to-school event hosted by One Community One Voice and University of Lynchburg. 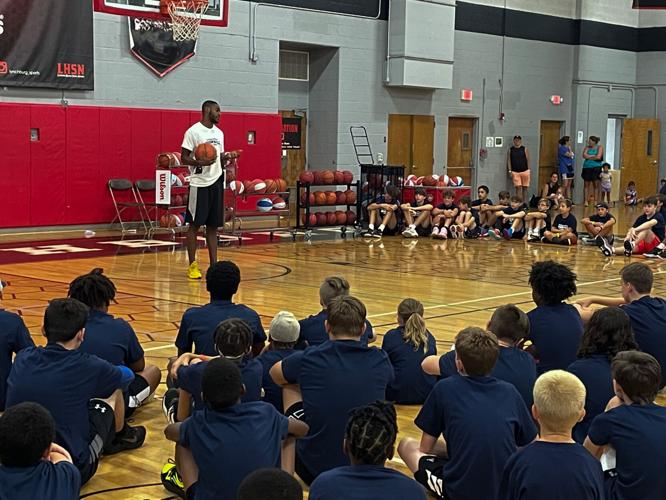 Jared Harrington, a basketball player for NBA Africa for the past four years, gives instructions to kids Saturday before drills. 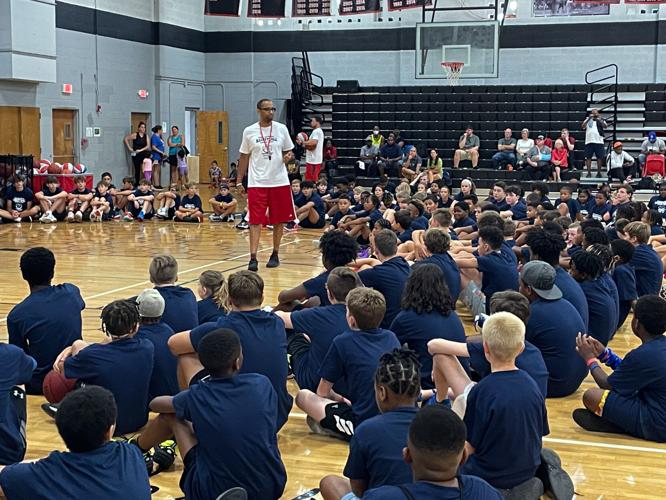