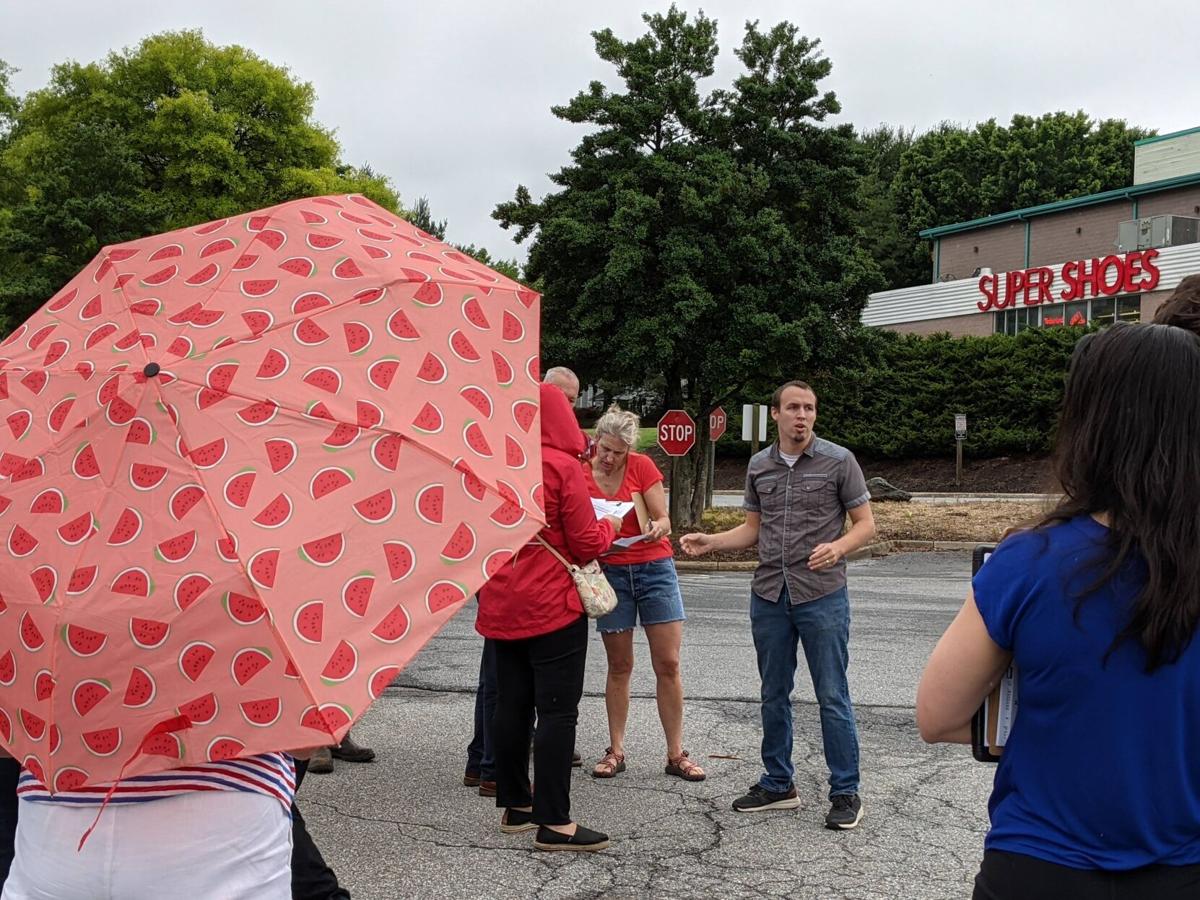 Andrew Glover (second from right), who organized Saturday’s signing event, gives instructions to the dozens of volunteers before they head off to collect signatures. 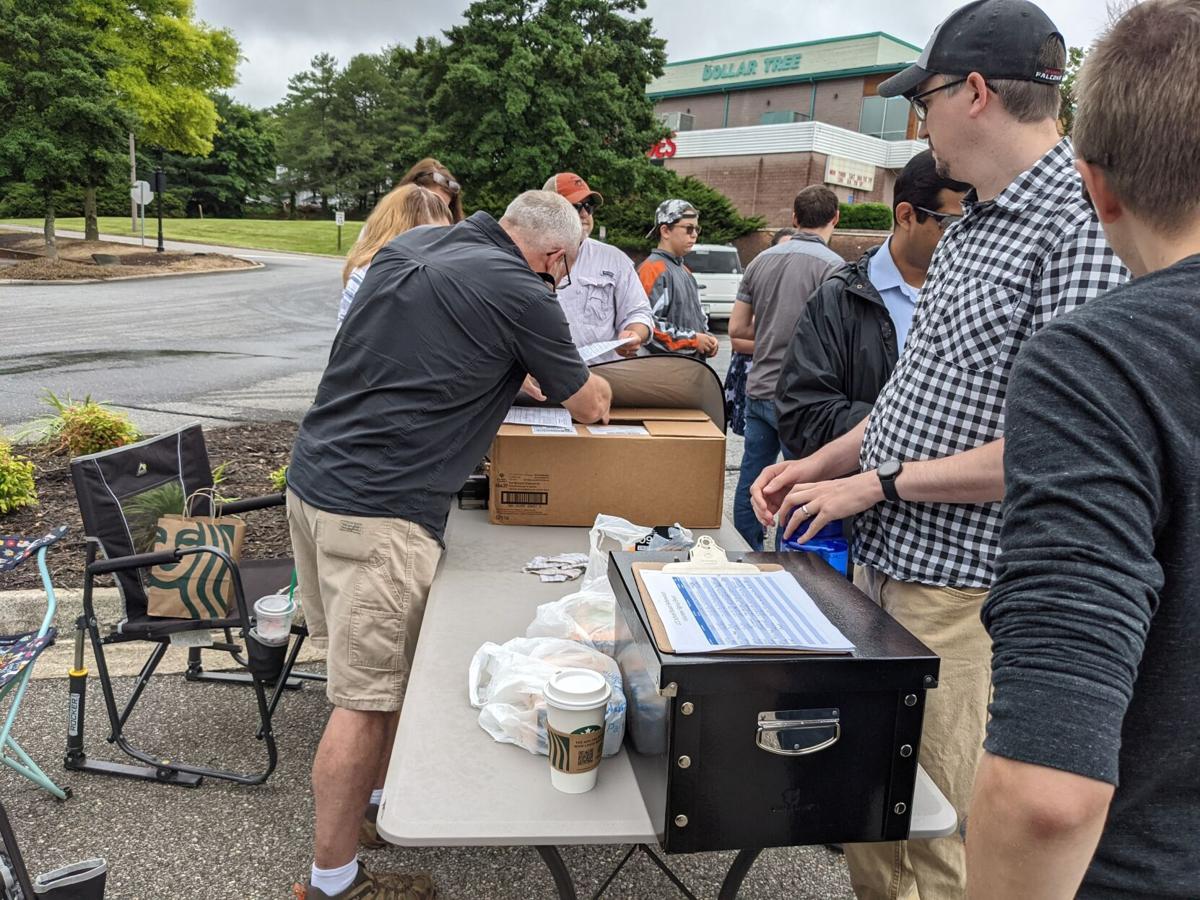 Volunteers collect supplies at Candlers Station before heading off to their assigned areas Saturday.

A referendum that seeks to give Lynchburg voters the chance to elect their school board representatives is gaining steam in the Hill City.

Dozens of volunteers gathered Saturday at Candlers Station in Lynchburg to collect clipboards and petitions before splitting up to go to various community centers, businesses and residential neighborhoods. State and local officials also were in attendance to offer words of support.

Currently, the nine-member board is made up of three representatives for each of the division’s three districts. The members are appointed by city council for three-year terms.

Andrew Glover, founder of the group Conservative Parents of Lynchburg and the one who began the petition, said there were more than 70 available locations for volunteers to visit Saturday.

“This is how change happens in a community and right now we need change here in Lynchburg,” Glover told volunteers. “We have a school board who’s not accountable to anybody and making decisions that are really harming our community and more importantly our kids.”

Glover told The News & Advance on Monday that so far the referendum has garnered roughly 3,500 signatures, or more than half the required 6,000 needed to include it on the ballot for the November general election. The deadline, Glover said, is July 9 and signatures must be certified by the Lynchburg City Registrar.

Before setting out to collect signatures, Beth Hammond said she felt confident volunteers could collect the required 6,000.

“I think there needs to be transparency and people don’t feel like it’s transparent at this point,” Hammond said of the school board.

Glover said the target that day was for each volunteer to gather 60 signatures. In a Facebook post, Glover estimated volunteers collected about 400 to 450 signatures Saturday alone. Some volunteers choose to take their petitions home with them to collect more signatures ahead of the end of the month.

Del. Wendell Walker, R-23rd, who was in attendance Saturday, said of the more than 130 different localities in the commonwealth, fewer than 20 have appointed boards.

“The question is if Bedford County, Campbell County, Amherst County and Appomattox County all have elected school boards, why shouldn’t Lynchburg have the same rights and the same voice,” Walker said.

Ward IV Councilman Chris Faraldi, also in attendance, said he was in support of putting the question before voters and letting the community decide.

“I think with all the scrutiny given this past year and a half, two years to the Lynchburg City School Board, it’s worth letting the community decide and getting their input,” Faraldi said.

Faraldi added he stood by any action that would make government more transparent, which he said an elected school board might be able to provide.

“This is how change happens in a community and right now we need change here in Lynchburg.”

— Andrew Glover, founder of the group Conservative Parents in Lynchburg

In an effort to better understand the current and future needs of its school buildings, Lynchburg City Schools is moving forward with a $400,000 facilities study.

As part of a statewide effort to study where residents are most at risk during extreme heat, faculty and students with three local colleges ar…

Additional tests to determine what could be causing various symptoms, such as headaches, skin and eye irritation, and trouble breathing, among staff members working in the LCS school administration building have yielded no new information.

Newcomers vie for Timberlake seat on Campbell County School Board

Andrew Glover (second from right), who organized Saturday’s signing event, gives instructions to the dozens of volunteers before they head off to collect signatures.

Volunteers collect supplies at Candlers Station before heading off to their assigned areas Saturday.