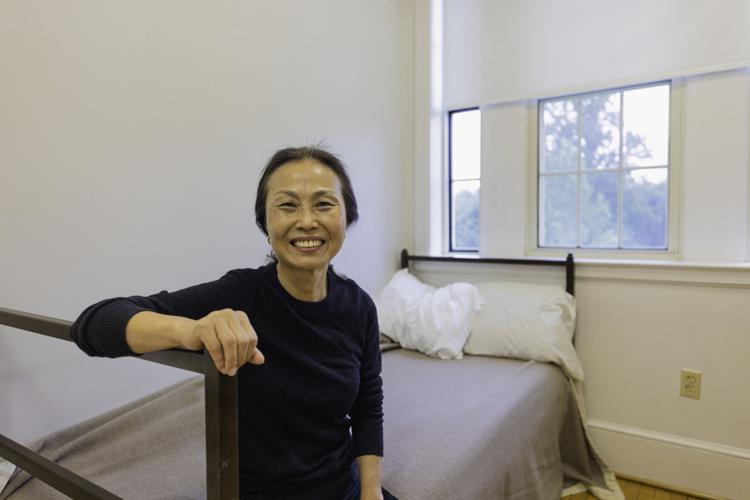 Woo said when she first came to Grammer Hall, students asked her to come down to the basement to join them in a card game.

Liz Carr, a freshman at Sweet Briar, said she and friends decided to have a game night and invited the president by slipping a note under her door on the first floor.

“It was kind of fun to talk to her and see her,” Carr said.

With it being orientation week, Carr said students were busy with activities. They didn’t get a chance to see her as much, but she said it was nice to see the president. Carr described it as a interpersonal experience.

“It was interesting that she decided to do that,” Carr said.

Late in the spring, Sweet Briar reached record numbers in alumnae donations. The class of 1972 had its 50th reunion as it gave more than $10 million in donations. With hopes of renovating and upgrading student living spaces.

So far, the college has created a common space with gardens where students can go, renovated the student café, activity centers and parlors, which are living room spaces in different dormitories.

Two big takeaways the president had from this experience were receiving a book — “Women Who Dared: To Break All the Rules’’ by Jeremy Scott — from the librarian of the hall and receiving a red piece of cloth from an international student that you tie around a braid.

Woo said she learned a lot about what the students are thinking.

“I want to do my job well, and my job means really supporting our students, making sure that they’re happy, that they prosper,” Woo said.

Magazine names Lynchburg one of 25 best college towns in US

The city of Lynchburg has been named one of the 25 best college towns in the United States by “Travel & Leisure” magazine.

The Intervention Design Specialist model within Bedford County Public Schools has cut student disciplinary hearings and out of school suspensions in half since the initiative launched in 2019. Drop-out rates at Jefferson Forest High School alone have been reduced by 50% over the past few years.

The unique IDS model is designed to be preventative and proactive rather than reactive and punitive. Intervention and support can help students avoid escalation of behaviors that might result in stronger discipline like suspension.

Only half of Lynchburg public schools receive full accreditation

Only half of Lynchburg City Schools’ 16 schools achieved full accreditation from the Virginia Department of Education, according to accreditat…

After the recent release of Standards of Learning (SOL) scores across the commonwealth, Lynchburg City School officials have rolled out a plan…