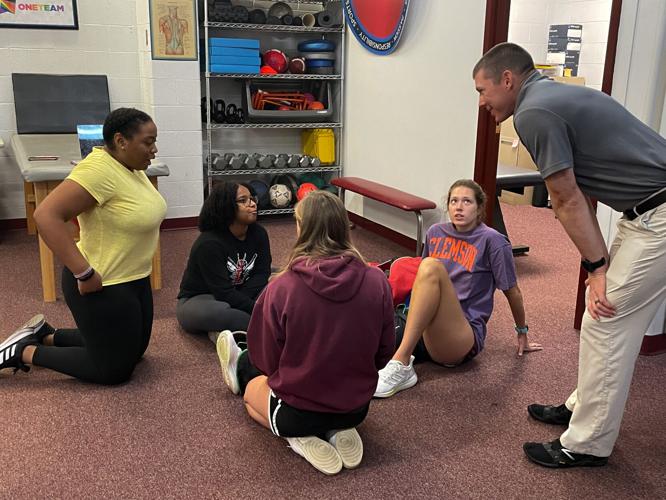 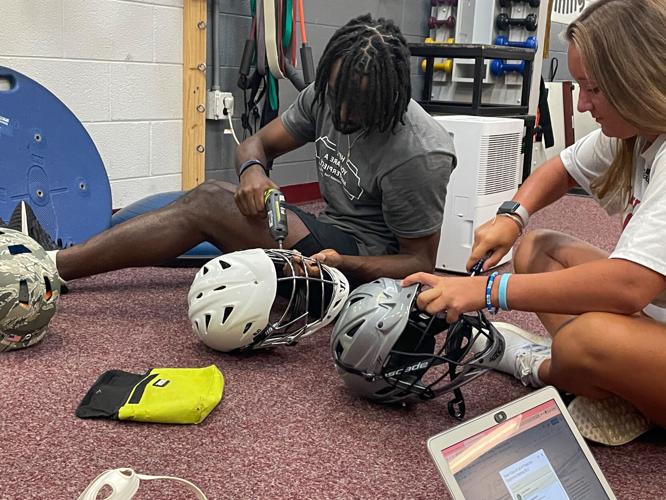 Two students in the Master of Science in Athletic Training Program practice removing a facemask from a helmet. 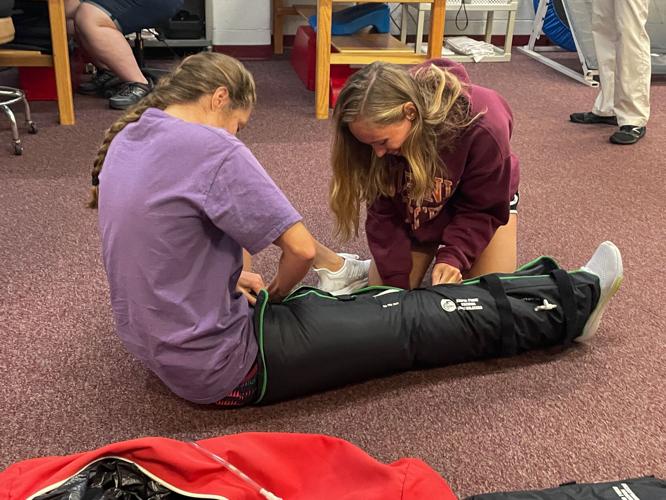 Two students in Master of Science in Athletic Training program practice adding a brace to an injured in the event of an injury. 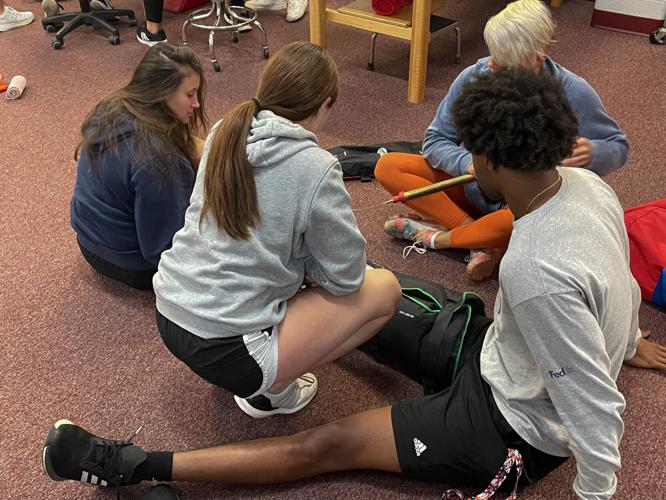 Students work collaboratively to position a leg brace for an assignment.

When the Master of Science in Athletic Training program at the University of Lynchburg had its first class of students in 2016, they had just six students.

Three were African American, two were Caucasian and one was international, according to professor of athletic training Tom Bowman.

Bowman said they have been fortunate the program’s cohort of students remained diverse as it was something that organically happened.

“We have intentionally made that one of our focuses in the program, building off of that first cohort,” Bowman said.

In 2017, the MSAT program received a $2,815 grant from the National Athletic Trainers’ Association’s Ethnic Diversity Advisory Committee, according to a news release.

The program was able to get a handful of students from those schools directly, according to Bowman.

Alyssa Smith, a second-year student in the program who attended UL after finishing her undergraduate studies at St. Augustine University, said she first heard about the program from her academic advisor at St. Augustine, where she studied exercise science.

“I really needed that, considering I came from a small undergraduate school,” Smith said. “I still needed that intimacy to be a great student.”

Smith is scheduled to graduate from the program next spring. She currently is undecided on what the next steps are for the future as physical training school and entering the athletic training profession are options.

She said this move to a new school and environment was important.

“I think that sometimes, we as people get comfortable with who we grew up with and who we surround ourselves with,” Smith said. “And I think to be successful or to make it I think it’s important that you bridge out and try to engage in different cultures, heritages and people.”

The master’s program is 24 months long. First- and second-year students take classes in the fall, spring and summer. During their studies, students take clinical classes with the opportunity to get hands-on training under other trainers.

Bowman stressed the general importance of adding more diversity to the profession.

He gave an example of how there are a small number of athletic trainers who are Black, Indigenous or people of color, compared to the number of BIPOC athletes playing collegiate sports.

The professor said people actually end up getting better care when they have a provider that looks like them.

“When you look at the literature for health care, concordance between provider and patient, them having the same racial identity, is important from a trust building standpoint,” Bowman said. “The literature shows that patients are more likely to see their provider if they share that racial concordance and they are more likely to be forthcoming with their current condition.”

One Community One Voice, University of Lynchburg put on back-to-school event

The University of Lynchburg hosted an annual back-to-school event Saturday, sponsored by One Community One Voice, to help kids and families prepare for the upcoming school year.

With school security in the spotlight as the 2022-23 school year nears, Lynchburg City Schools Superintendent Crystal Edwards recently gave so…

'All hands on deck:' Lynchburg City Schools faced with 35 teacher vacancies one week before first day

One week after remaining mum on the number of staffing vacancies in Lynchburg City Schools, administrators provided clarity on the exact numbe…

The state Department of Education is finalizing model policies to ensure parents are notified if their children are being taught sexually explicit instructional materials in the classroom.

College students in the area will return to campus over the next few weeks to begin the fall semester.

Lynchburg's Linkhorne Middle School was recognized this week by the FBI's Richmond office for participating in the bureau's Safe Online Surfing Internet Challenge.

With two weeks to go until students return to the classroom for the 2022-23 school year, Lynchburg City School administrators are wrapping up …

University of Lynchburg president preps for third year of leadership

Drought causes French river to be crossable by foot

Two students in the Master of Science in Athletic Training Program practice removing a facemask from a helmet.

Two students in Master of Science in Athletic Training program practice adding a brace to an injured in the event of an injury.

Students work collaboratively to position a leg brace for an assignment.