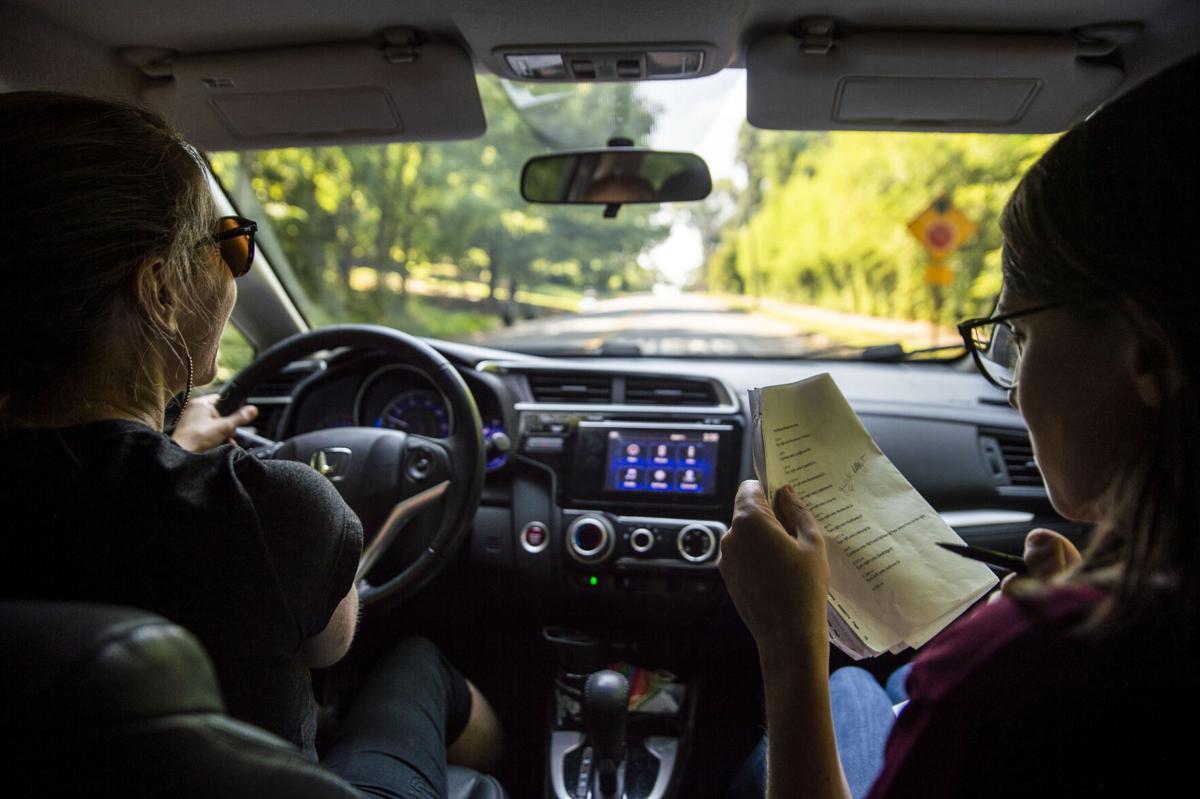 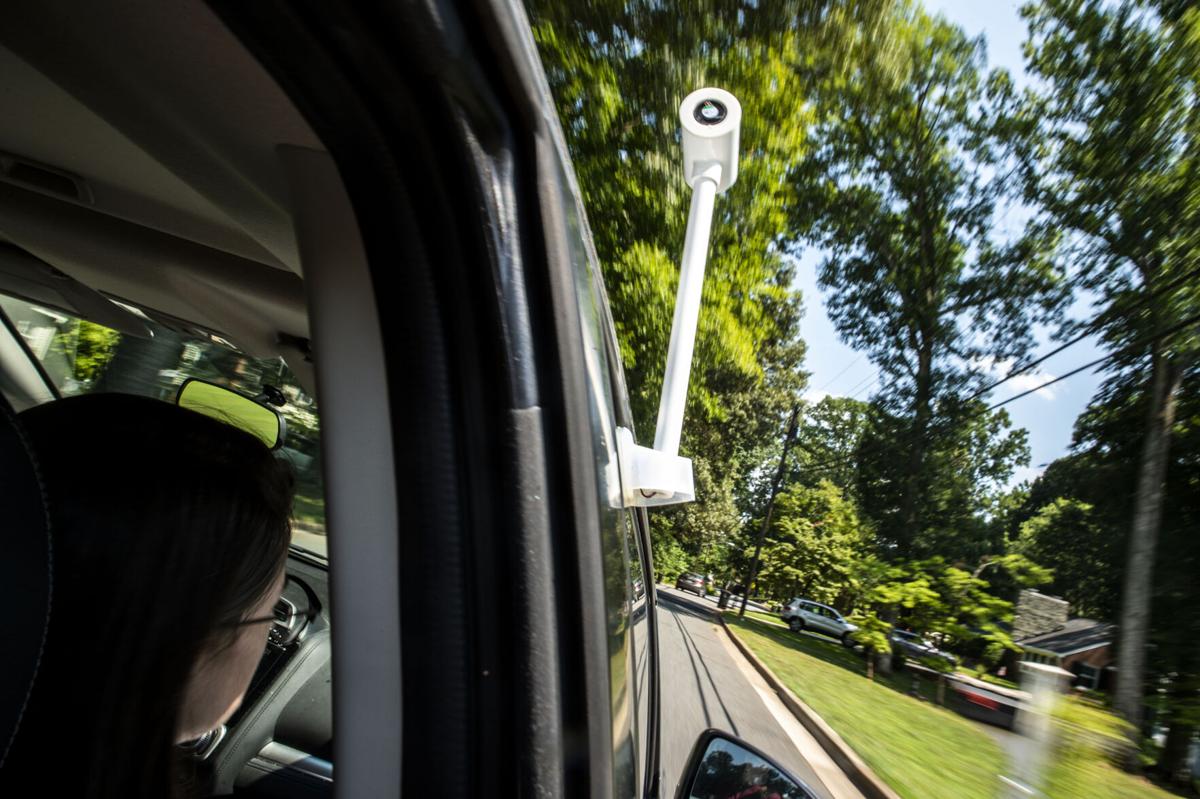 A heat-recording instrument mounted to the outside of a vehicle records heat signatures while traveling a route around a section of Lynchburg. 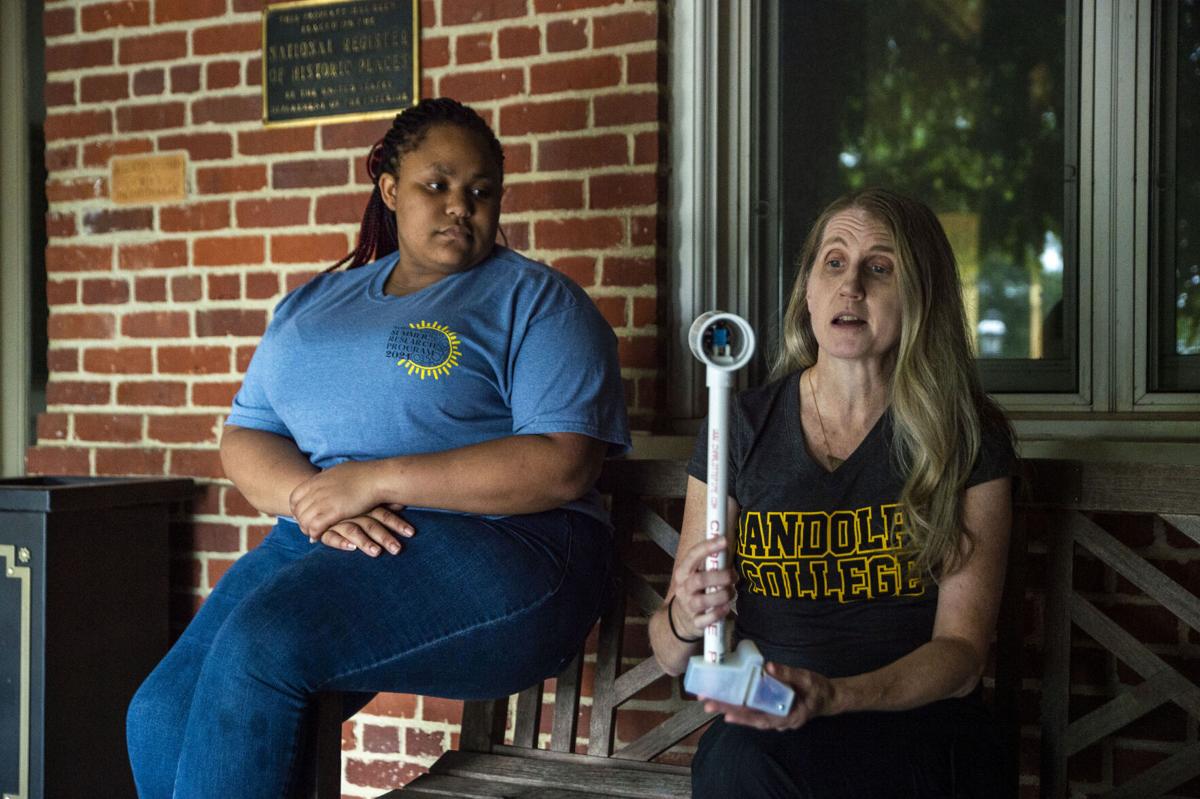 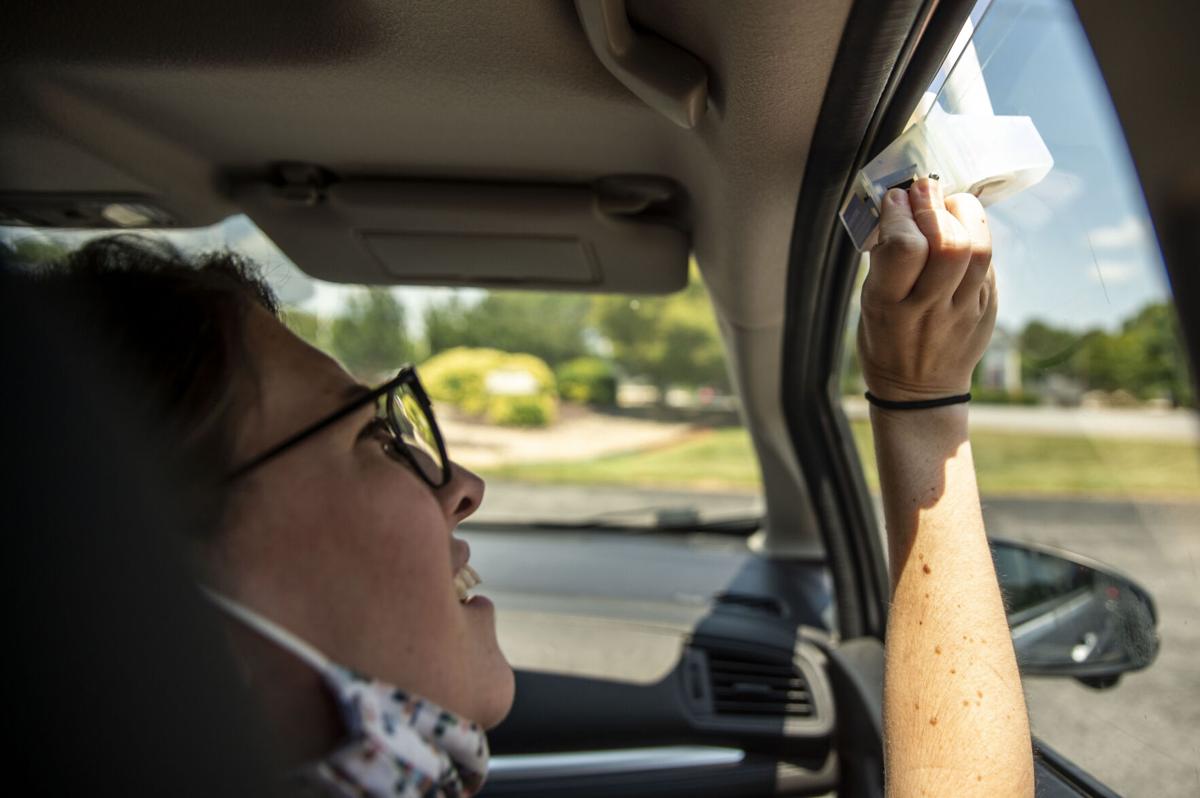 Kelsey Molseed, research and instruction librarian, turns on the heat-recording instrument before traveling a route around a section of Lynchburg while participating in the Virginia Heat Watch program on Thursday, July 15, 2021.

As part of a statewide effort to study where residents are most at risk during extreme heat, faculty and students with three local colleges are participating in Virginia Heat Watch.

Randolph College, the University of Lynchburg and Sweet Briar College were among the more than a dozen institutions in the Virginia Foundation of Independent Colleges to help gather temperature data in 10 regions across the commonwealth that will be used to better understand how heat risk varies in their communities.

Volunteers — including faculty and staff from the three colleges, as well as Lynchburg residents — spent hours gathering data across the city July 15. They used specially designed thermal sensors to record temperature and humidity as they drove along five hour-long routes that together totaled 97 miles across the city.

The project involves students and the public in collecting valuable data about urban temperatures that can be used to inform community planning, as well as in classes and future student research. Data was collected at 7 a.m., 3 p.m. and 7 p.m., in an effort to capture the coolest and hottest times of the day.

Karin Warren, Randolph College’s Herzog Family Professor of Environmental Science, said the goal is to use the data to determine what areas of the city get hotter on a given day. Areas with more concrete and sidewalk space and less grass and tree cover, she said, are likely to be more vulnerable to heat.

“Some parts of our community will probably experience more heat during a heat wave event than other parts,” Warren said. “We hope to use this information to help work with the city and work with community groups to develop solutions moving forward to address heat risk that we’re experiencing now and heat risk that will get worse in the future.”

According to a news release from VFIC, past heat mapping studies have found significant temperature differences between the coolest and hottest places at the same time of day, with neighborhoods that had historically been home to minority occupants and considered high-risk for mortgage lenders — or “redlined” — most vulnerable to heat.

Randolph College rising senior Michellé Starks said she is particularly interested in the intersectionality of the project and in seeing the correlation between heat and historical redlining. She’s also interested in tree equity, the effort to ensure all areas of a city are able to experience the environmental benefits of trees.

While Lynchburg has good urban tree cover — about 50%, Warren said — it’s not distributed well. Warren said they anticipate the data will show older, low-income, food-insecure neighborhoods also will be more vulnerable to heat. Homes in those areas, she said, are less energy efficient, as well, which makes their residents more susceptible to any extreme weather.

Lisa Powell, director of the Center for Human & Environmental Sustainability, and associate professor of environmental studies at Sweet Briar College, said the college was excited at the opportunity to bring together students and scientists across the region and state.

“When we heard that the VFIC and other partners in Virginia were preparing for this project, we jumped at the opportunity to be involved,” she said.

Powell said the project is “very much aligned” with the college’s interdisciplinary approach to sustainability.

“We look not only at things like data on temperature and humidity, but also how those connect to policy, urban planning and people’s everyday life and experiences,” Powell said.

Laura Henry-Stone, associate professor of environmental science and sustainability; director of sustainability; and interim director of the Claytor Nature Center at the University of Lynchburg, said the project aligns with the university’s climate commitment and university President Alison Morrison-Shetlar’s new initiative to support the success of the city, Lynchburg Tomorrow.

Henry-Stone said undergraduate and graduate students at the three colleges will use the data to inform their research, and professors plan to use the data in their teaching.

Powell said Sweet Briar College constantly uses its large campus as a laboratory of sorts for students to gain hands-on learning, and was excited to extend that into the region beyond its campus.

Warren anticipates receiving the raw data collected July 15 in September — in about six to eight weeks.

“As soon as we get that data in our hands, we’re going to dive into it and start sharing it with the community,” Warren said.

When developing the routes, Warren said they focused on areas where many people live, work, shop and play, and where more vulnerable populations — such as elderly people and children — frequented. Routes drove past the city’s five colleges and universities, public schools and retirement communities, as well as several local parks and both rural and urban residential neighborhoods.

Warren said she hopes the data will be used by Lynchburg City Council, the planning commission and Lynchburg City Schools, as well as other community businesses and organizations, to inform future land use in the city and start conversations about how to address heat risk already being experienced by the city.

For example, data could show some public schools are at a greater risk to experience heat than others, Warren said, and could prompt the city school division to explore ways to increase green space on playgrounds. Or, data could show downtown experiences more heat than more rural areas of the city, and could start conversations among city leaders about offsetting that heat risk with cooling stations.

“Downtown has a lot of black roofs, so maybe we can suggest using those roofs or painting them a lighter color so the building isn’t absorbing as much heat,” Starks said. “A lot of those roofs are very flat and not used often enough, so we could also suggest using them as a community garden so they aren’t contributing as much to heat risk downtown.”

Data generated by this project will be used to inform many existing efforts and programs in the commonwealth related to public health, energy efficiency, sustainability, climate change mitigation and resilience, urban forestry, equity and social justice, and more.

The Bedford County School Board will hold a special-called meeting this week to discuss changes to policies regarding transgender students and updates to health mitigation measures for the upcoming school year.

While Central Virginia Community College won't require its students and staff to receive the COVID-19 vaccine, it is working to encourage its community to become vaccinated by making the vaccine accessible and offering incentives to those who prove they've been vaccinated.

In an effort to better understand the current and future needs of its school buildings, Lynchburg City Schools is moving forward with a $400,000 facilities study.

Additional tests to determine what could be causing various symptoms, such as headaches, skin and eye irritation, and trouble breathing, among staff members working in the LCS school administration building have yielded no new information.

A heat-recording instrument mounted to the outside of a vehicle records heat signatures while traveling a route around a section of Lynchburg.

Kelsey Molseed, research and instruction librarian, turns on the heat-recording instrument before traveling a route around a section of Lynchburg while participating in the Virginia Heat Watch program on Thursday, July 15, 2021.