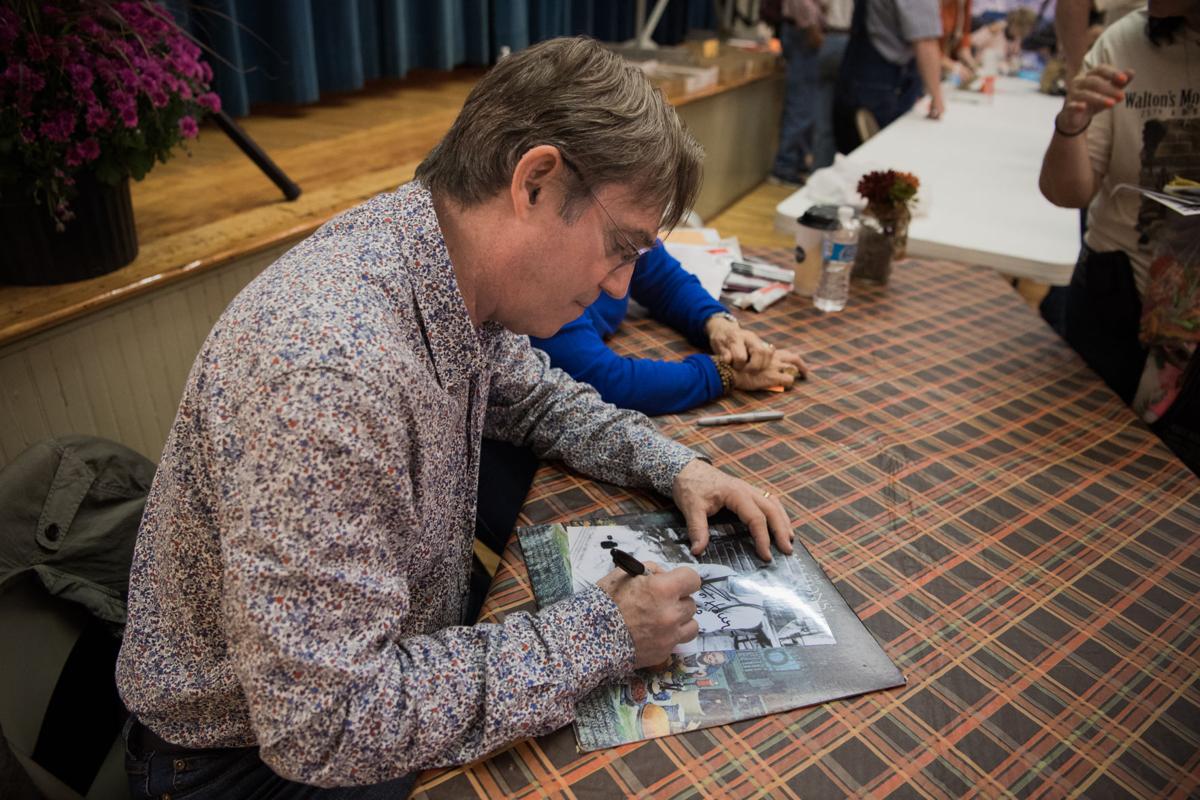 Richard Thomas spent hours singing autographs and posing for photos with fans of "The Waltons" TV show in Schuyler, Va. 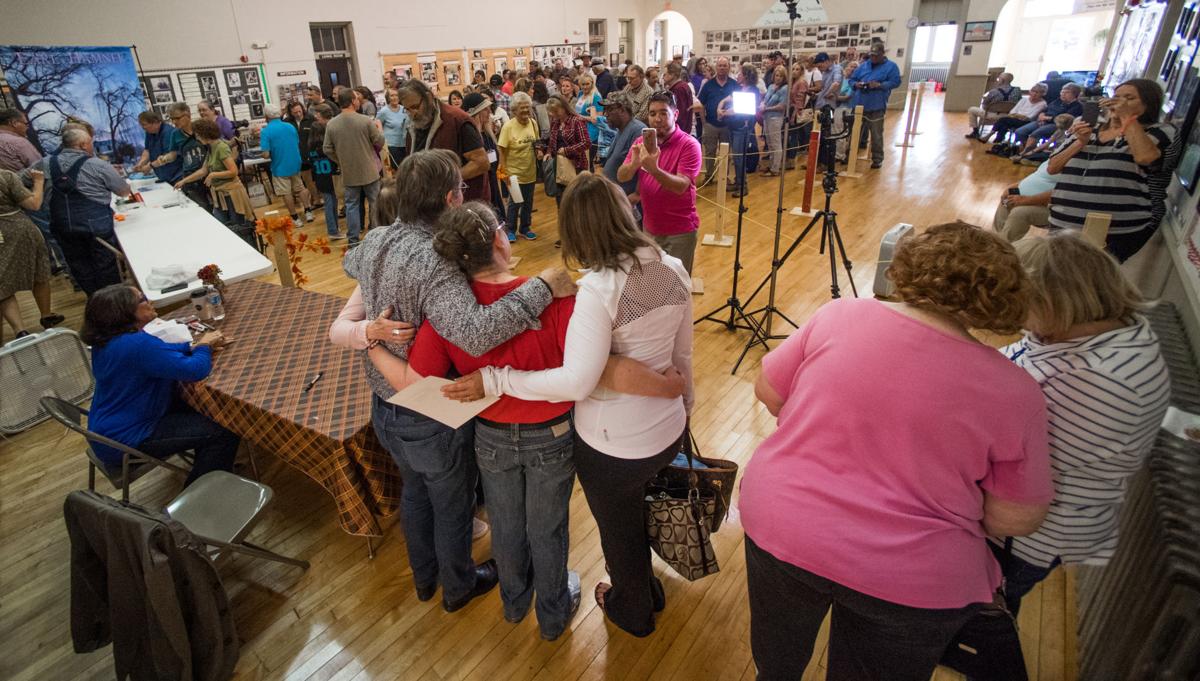 The Waltons Mountain Museum members stand in line to receive autographs and photos of Richard Thomas as he poses with three ladies Friday afternoon. 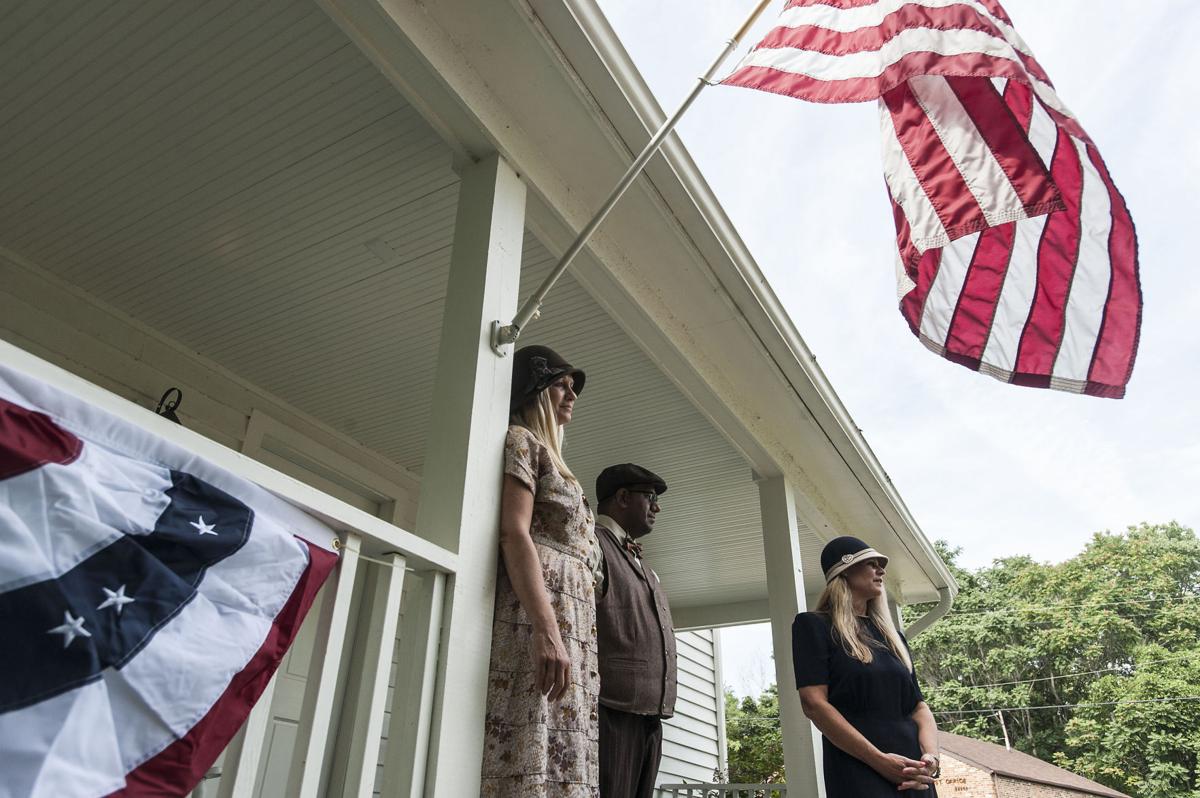 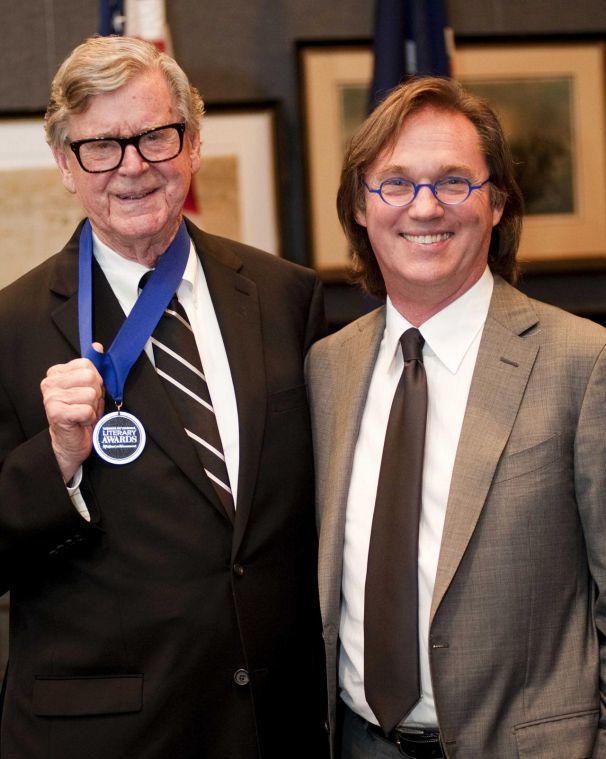 In this file photo, Earl Hamner Jr. wears his Literary Lifetime Achievement Award, which was presented by Richard Thomas (right) at the Library of Virginia. Hamner wrote long-running TV series "The Waltons" and Thomas starred as John-Boy Walton, the character Hamner modeled after himself. File photo

SCHUYLER — For many fans of the ’70s show “The Waltons,” seeing Richard Thomas, who played John Boy, in real life was a dream come true.

On Friday, more than 75 people from around the world stood in front of the Waltons Hamner House for a ribbon-cutting ceremony to kick off the three-day Waltons Mountain Museum 25th Silver Anniversary in Schuyler.

“[Meeting Thomas] was the only thing on my bucket list,” said Sinead Reilley, who traveled from Ireland with her family for the anniversary celebration. “The whole thing to be in Schuyler, to see everything to do with ‘The Waltons’ and to see Richard Thomas is just the icing on the cake.”

The famous family drama “The Waltons” was based on Nelson County native Earl Hamner’s novel “Spencer’s Mountain,” inspired by his experiences growing up in Nelson County during the Great Depression. The show — which aired from 1972 to 1981 — followed a family living in the Blue Ridge Mountains during the Depression through the eyes of son John Boy, an aspiring writer.

Hamner died in 2016 at age 92, but his house and the museum long have been destinations for admirers. Longtime fans of the show Ray Castro, Carole Johnson and Kirstin DeMaio bought Hamner’s house in August to keep Hamner’s legacy alive. It was Castro who invited Thomas to the festivities.

“For me, it’s more about preserving Earl’s legacy and working with the museum in preserving the legacy,” Castro said of this weekend’s events. “It’s about making their experience to Schuyler a more memorable one and for fans to enjoy for decades to come.”

The weekend celebration marked the first time Thomas had returned to the Hamner house since 1973. Thomas, like Hamner, won an Emmy for his work on the show portraying John Boy, who Hamner modeled after himself.

“Thanks for showing up. I’m very touched, proud and happy to see you all,” Thomas said before cutting the ribbon Friday.

Special guests for the weekend included Hamner’s sister Audrey Hamner; his nephew Harold Hamner; Tammi Bula, who played Marcia Woolrey in “The Waltons;” and Jesse Rutherford, who is a candidate for the Nelson County Board of Supervisors East District seat which includes Schuyler.

Thomas said it’s been “too long” since he last visited Schuyler.

“I’m so amazed at how many people are here. I’m shocked,” Thomas said. “[Fans have] been so patient waiting, and they come from so many different places. It’s fantastic.”

Later, hundreds more fans lined up inside the Waltons Mountain Museum to meet, take a photo and get an autograph from Thomas. The autograph event only was open to members of the Friends of Waltons, a membership for the museum.

“I’m on cloud nine. It’s wonderful,” said Marie Sloan, who traveled from Winfield, West Virginia. “I couldn’t think by the time I got up there what I wanted to ask him. I told him it was nice to meet him.”

William and Amy Hornaday were on their way from Colonial Williamsburg to Rushville, Indiana, and happened to stop by the event. They’ve watched the show since they were kids.

“It’s surreal when you see them on the TV all the time,” William Hornaday said. “This was just a spontaneous thing on the way back home. We never knew it existed, and now we’re official members [of the museum].”

The anniversary also marked the opening of The Pony Cart Room, a new exhibit at the museum based off the episode “The Pony Cart Room.” According to the Hallmark Channel, the episode featured John Walton's 90-year-old aunt coming to visit the family and annoying everyone when she insists on everyone doing everything her way. In the episode, characters Ben Walton and Martha Corrine build a pony cart. The room features the cart from the episode in a background setting of a house from the episode.

“[The Pony Cart Room] is amazing. It’s wonderful to have new life at the museum,” said volunteer Wade Tallant, of Roanoke. “It’s a great opportunity for the community and the state of Virginia.”

Jesse Rutherford is running for the East District seat on the Nelson County Board of Supervisors, which includes Schuyler. The district was incorrectly identified in a previous version of this article.

This magnetic helmet may be the newest weapon against brain cancer

This magnetic helmet may be the newest weapon against brain cancer

Actor Richard Thomas, famously known for playing John-Boy Walton in “The Waltons,” will be making his first appearance at the Walton’s Mountai…

Richard Thomas spent hours singing autographs and posing for photos with fans of "The Waltons" TV show in Schuyler, Va.

The Waltons Mountain Museum members stand in line to receive autographs and photos of Richard Thomas as he poses with three ladies Friday afternoon.

In this file photo, Earl Hamner Jr. wears his Literary Lifetime Achievement Award, which was presented by Richard Thomas (right) at the Library of Virginia. Hamner wrote long-running TV series "The Waltons" and Thomas starred as John-Boy Walton, the character Hamner modeled after himself. File photo