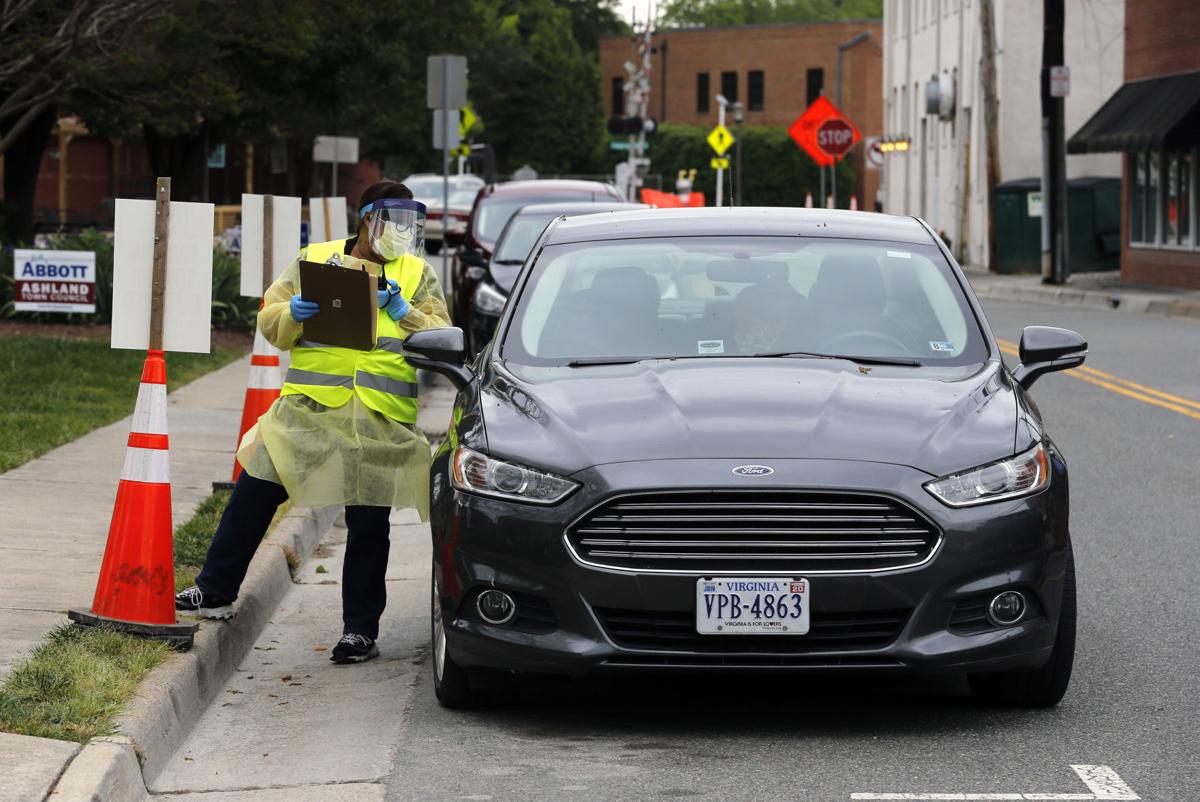 A poll worker wearing protective equipment checks a drive-up voter outside the Ashland Town Hall in Ashland May 19, 2020 as the town held a municipal election. 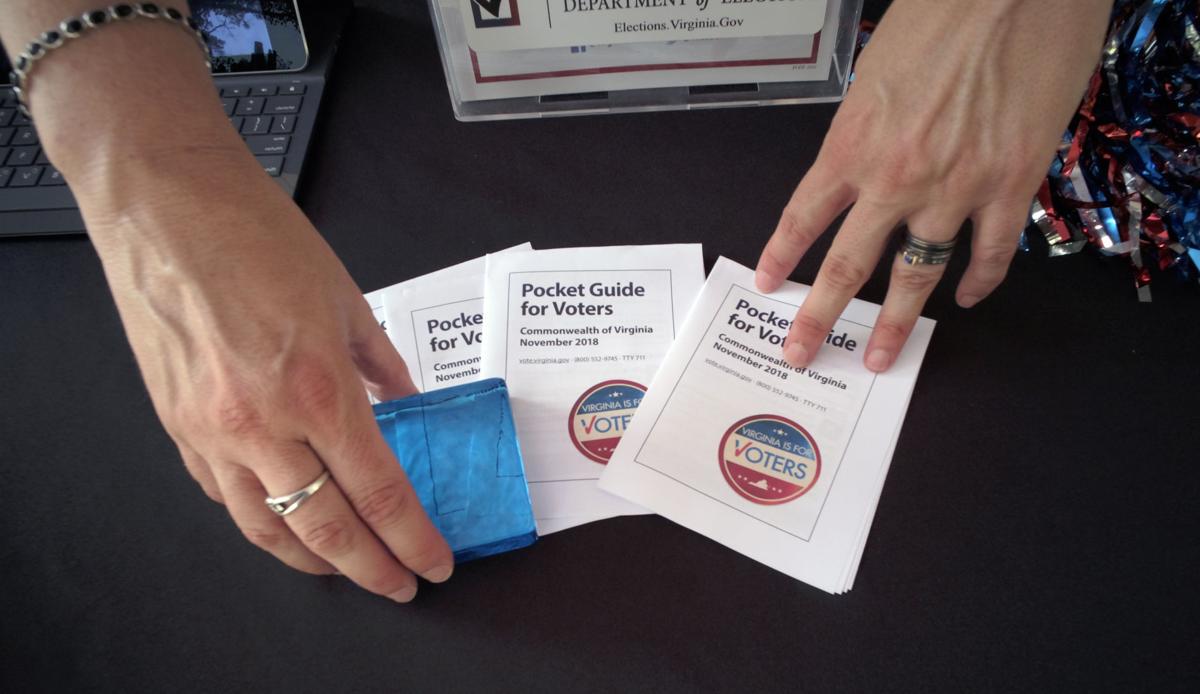 Pocket guides for voters were arranged as the Virginia Department of Elections set items up in a booth inside Capitol Square in RichmondSept. 25, 2018, as part of National Voter Registration Day.

The registration of new voters in Virginia has dropped significantly during the coronavirus pandemic, months before a presidential election expected to draw a high turnout.

June saw a 40% decrease in the number of new voters registered compared with June 2016, according to the Virginia Public Access Project, a slight rebound from more dramatic corresponding drops in May and April as DMV centers, the primary location for voter registration, gradually reopen. Still, new voter registrations are significantly down compared with the two most recent presidential elections, a trend happening across the U.S. as the virus continues to spread.

“We’re definitely seeing it everywhere,” said Kat Calvin, the founder and executive director of Spread the Vote, a California-based organization that helps people, including Virginia residents, register to vote. “I am concerned and I understand it — we’re in a pandemic — but we still have an election Nov. 3.”

Last month, 13,686 new people registered to vote in Virginia, according to VPAP, down from the 23,135 in June 2016 and also lower than the month’s totals in the past three years. The state saw steeper drops in the first few months of the pandemic, with new voter registrations decreasing 57% in May and 73% in April.

The drop is another consequence of the virus, which continues to spread in Virginia, infecting more than 82,000 residents and killing more than 2,000 to date.

The virus stopped typical voter registration efforts like door-to-door canvassing and booths at public events. College campuses, normally a hotbed for new voters, closed and students’ return is uncertain. The Department of Motor Vehicles, where most registration happens, also closed and are reopening in waves.

Former Virginia Gov. Terry McAuliffe, who has endorsed presumptive Democratic presidential nominee Joe Biden, said he expects opposition to President Donald Trump to draw people to the polls in November. Democrats in the state have used an anti-Trump wave to pick up seats in Congress and flip control of the statehouse during Trump’s tenure.

“We’ve got plenty of time,” McAuliffe said, adding that he was encouraged by the turnout in March’s Democratic presidential primary, which saw roughly 1.3 million people vote, compared with 785,190 in the 2016 Democratic primary in Virginia. “People are going to vote. They’re energized.”

Before the pandemic, voter registration in Virginia was above 2012 levels but still below 2016 numbers, according to VPAP.

Chris Bolling, Biden’s Virginia state director, blamed the downturn in voter registration on the Trump administration’s handling of the pandemic.

“Trump’s failure of leadership with coronavirus has affected every aspect of life for Virginians, including ways to make sure voters are engaged and prepared to vote this fall,” Bolling said. “But Virginians remain excited and energized to vote for Joe Biden and Democrats up and down the ballot in November.”

Bolling added: “As we have done consistently, we will continue to find ways to meet voters where they are through our digital organizing and campaign efforts to make sure voters turn out to vote and keep this Commonwealth blue.”

Samantha Cotten, a spokeswoman for Trump Victory, a joint fundraising committee between the Trump campaign and Republican National Committee, said the campaign has doubled the number of voter registrations it collected in 2016.

“We are lightyears ahead of Joe Biden and the Democrats on every front across the Old Dominion whether it’s door knocking, phone calls, voter registration, or fundraising,” Cotten said. “We are just over 100 days out until Election Day and enthusiasm to elect President Trump and Republicans up and down the ballot in Virginia is unmatched.”

Virginia’s voter registration numbers have ticked up as DMVs have reopened.

Jessica Cowardin, a spokeswoman for the DMV, said 44 DMV offices across the state are open. The centers are still operating by appointment only.

Five more locations, in Altavista, Culpeper, Gloucester, South Hill and Woodbridge, are set to reopen Monday for services that generally require an in-person visit, such as first-time driver’s licenses and identification cards, original titles and original vehicle registrations. The agency is encouraging people to conduct transactions online or by mail if they can.

Cowardin said the DMV gives customers the opportunity to apply to register to vote or update their voter registration information to all customers conducting a driver’s license, ID card or change of address transaction, both in person and online.

“The information from an online transaction is transmitted to the Department of Elections electronically,” Cowardin said. “Also, for customers who conduct motor voter eligible transactions through the mail and wish to register to vote or update voter information, DMV mails a paper application to them.”

New laws that took effect this month allow for automatic voter registration for in-person and online DMV customers. Unless a customer opts out, their information is provided to the Department of Elections.

Cowardin added that while DMV centers were closed from March 18 through May 18 because of the pandemic, it continued to process voter registration applications.

Virginia has elections every year and presidential years have the highest turnouts. Virginia’s voter turnout has topped 70% in each of the past four presidential contests.

Cases in the region:

The total number of cases in the Central Virginia Health District to date as of Saturday rose 5, from 722 on Friday to 759 on Saturday.

On Saturday the Virginia Department of Health reported:

» In Amherst County, there were 76 cases, up 9 since Friday, three hospitalizations and no deaths to date.

» In Appomattox County, there were 56 cases, with one new reported case since Friday, two hospitalizations and no deaths to date.

» In Bedford County, 224 cases, an increase of seven since Friday, with five hospitalizations and four deaths total.

» In Campbell County, there were 101 cases, with 12 new cases since Friday, three hospitalizations and one death so far.

» In the city of Lynchburg, there were 312 cases, with 17 new cases since Friday, six hospitalizations and one death total.

» In Nelson County, located in the Thomas Jefferson Health District, there were 32 cases to date, with one new reported cases since Friday, no hospitalizations so far and no deaths.

A poll worker wearing protective equipment checks a drive-up voter outside the Ashland Town Hall in Ashland May 19, 2020 as the town held a municipal election.

Pocket guides for voters were arranged as the Virginia Department of Elections set items up in a booth inside Capitol Square in RichmondSept. 25, 2018, as part of National Voter Registration Day.