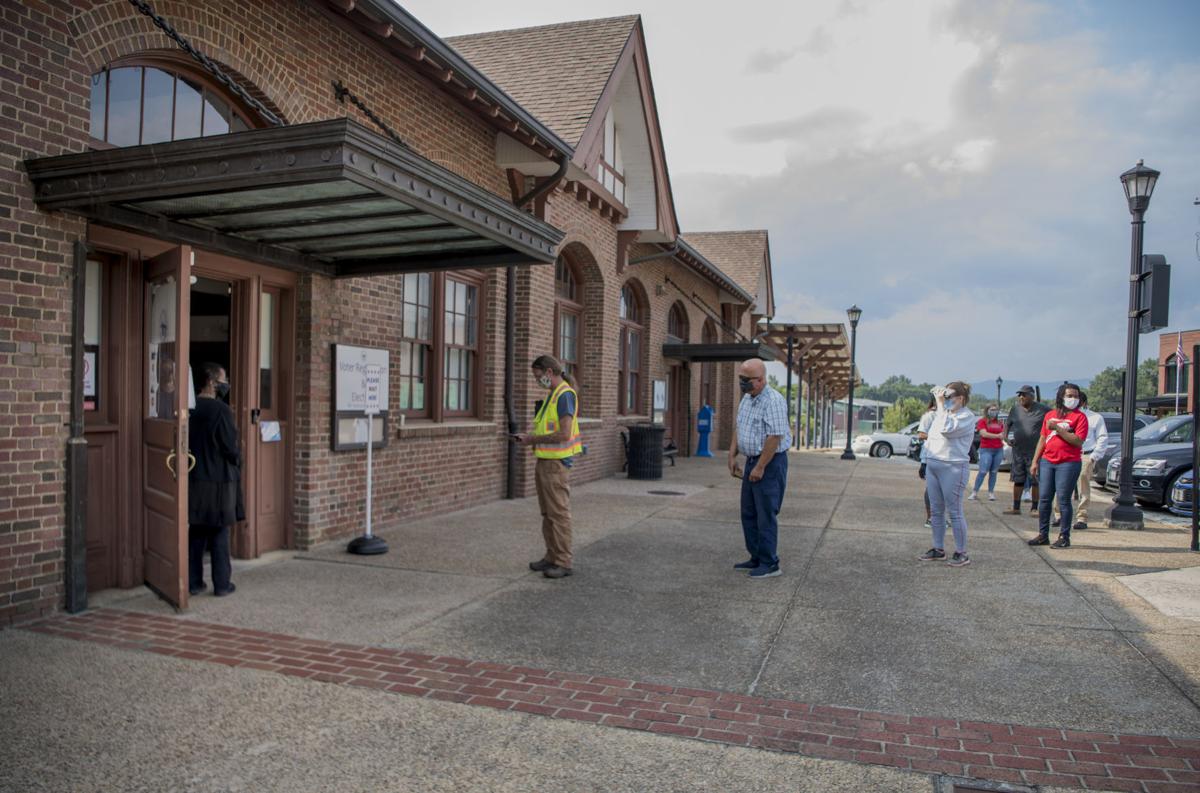 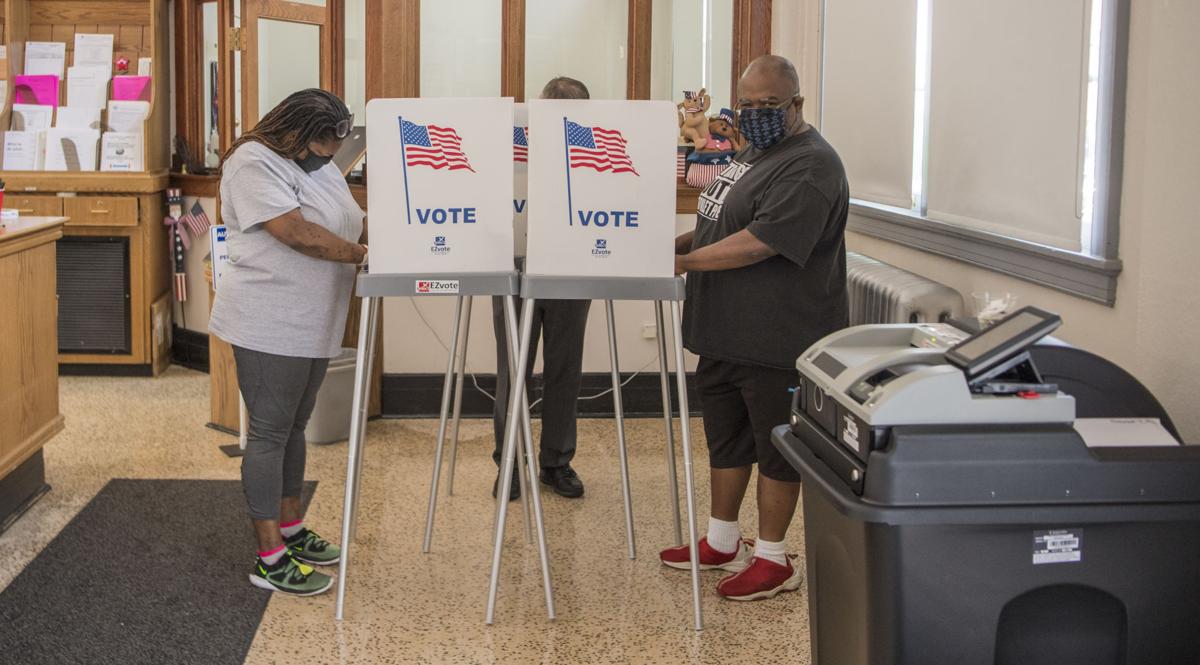 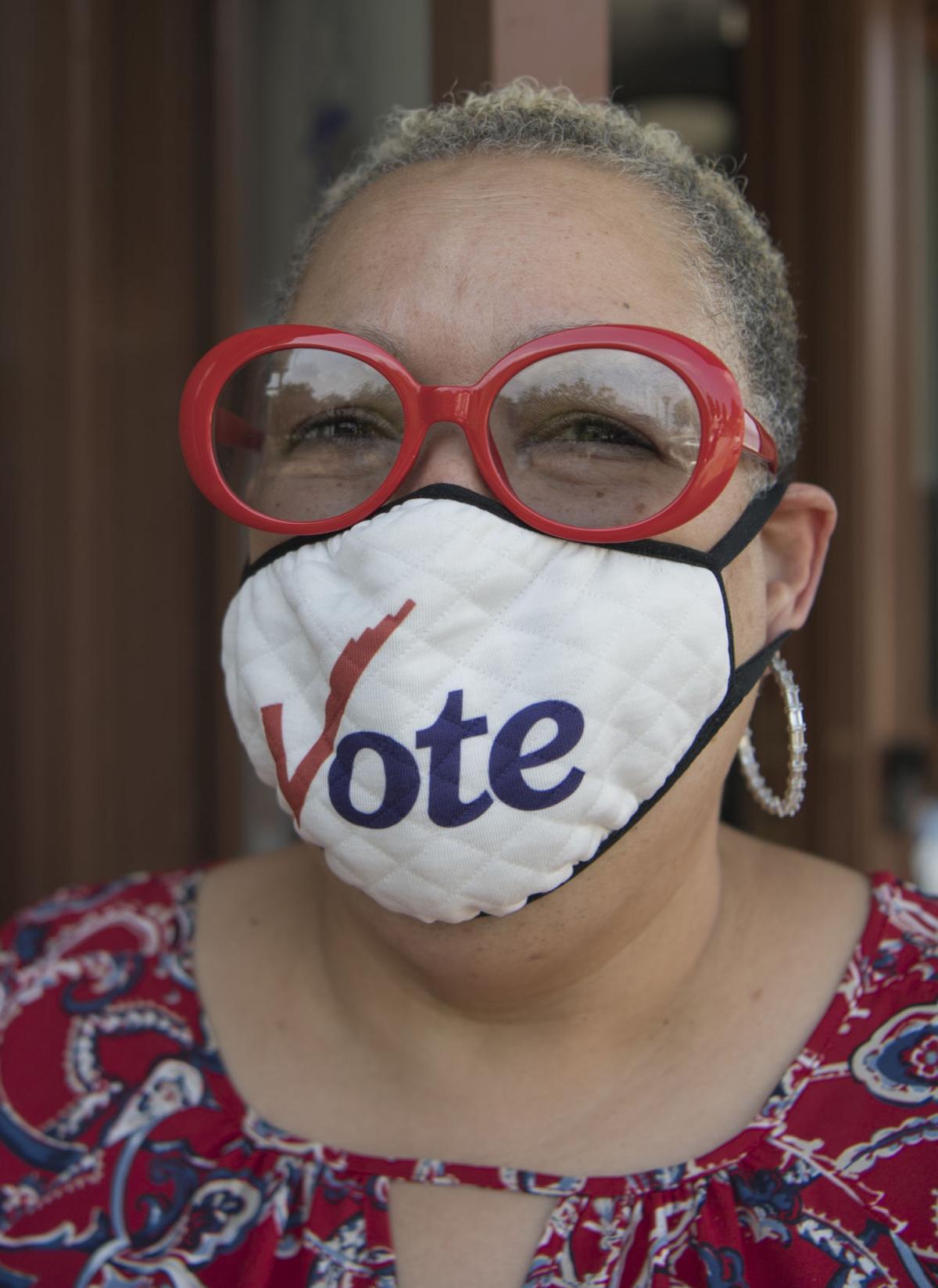 Kim Conner sports a "Vote" mask as she has been the deputy registrar for 21 years in Lynchburg. (Photo by Lee Luther Jr.) 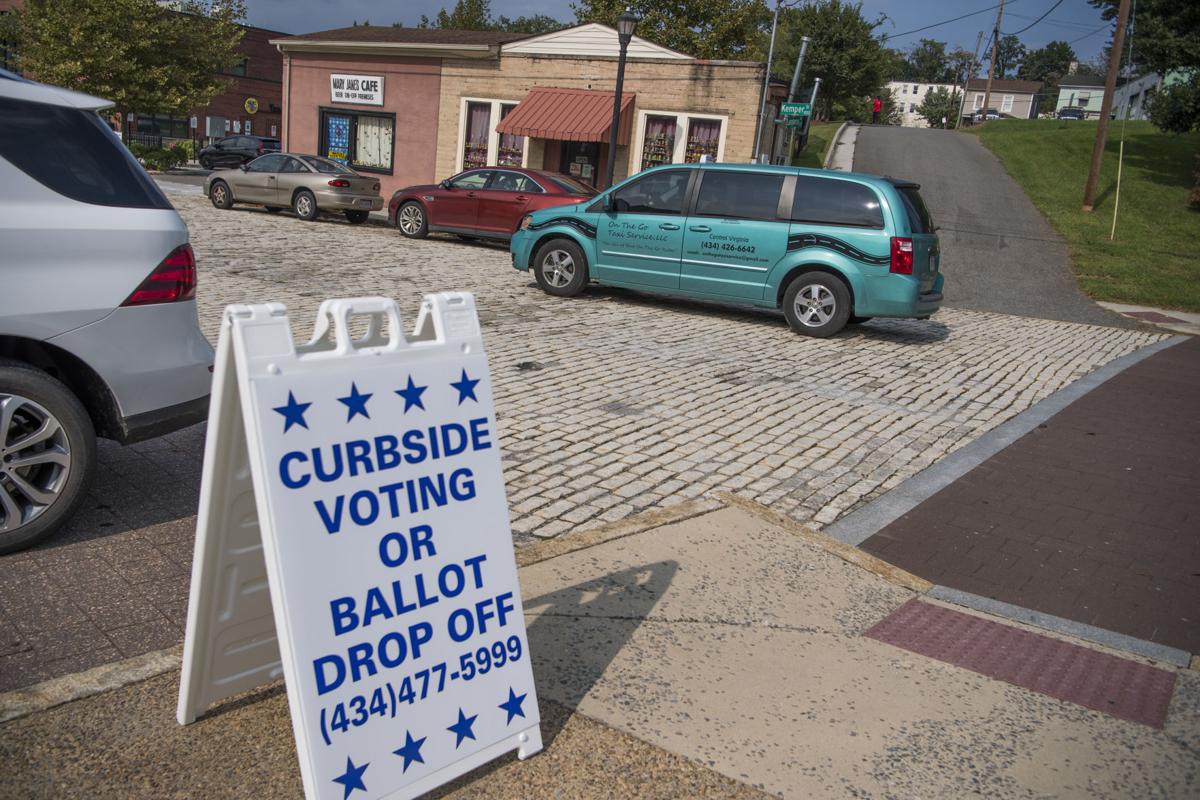 Voters had several choices on how to cast their votes, curbside, ballot drop off. (Photo by Lee Luther Jr.)

At times a line of about a dozen people stretched outside the city registrar’s office at Kemper Street Station. The first day of early voting in the state marked the first time voters could cast an early ballot without an excuse.

Lynchburg activist Farley Dickey, a former poll worker, was surprised to find a crowd of voters when she arrived to cast her ballot in the late afternoon.

“I’ve never seen anyone else in the office voting at the same time as me,” said Dickey, who regularly votes early. “When I saw a group of people outside, I was shocked.”

Dickey said she was encouraged by the turnout. She said no-excuse in-person voting could help reduce the lines at the polls on Election Day and help election officials ensure enough physical distance between voters.

In-person early voting in the Hill City is being held at the registrar’s office until Oct. 31. The office is open between 9 a.m. and 5 p.m. every weekday and during the last two Saturdays before Election Day.

In all, 295 people voted Friday, according to General Registrar Christine Gibbons. In addition to coordinating early voting, election officials spent much of the day sending out mail-in ballots to voters who requested one.

Gibbons said her office has received between 6,000 and 7,000 ballot requests. She anticipates up to 10,000 city residents — or up to about one in five registered voters in the Hill City — ultimately will vote by mail this fall. In 2016, about 2,500 voted absentee.

Lynchburg NAACP President Carl Hutcherson, who has urged local residents to vote as early as possible, said the increase in ballot requests reflected the fierce political divide in the country and the widespread enthusiasm among voters on both sides of the political spectrum.

“Whether you support our current president or not, he creates an awful lot of controversy,” he said, referring to U.S. President Donald Trump. “So there’s going to be people who are going to support him or Vice President Biden for that very reason alone.”

The Lynchburg Voters League has partnered with two local taxi services to transport voters to the polls for free this election season, according to President Cheryl Glass-Cabell.

She said residents interested in voting early at the registrar’s office can schedule a time to be picked up from their home and voters who want to cast their ballot on Election Day can get a ride to their local polling precinct Nov. 3.

Glass-Cabell said the drivers are following all COVID-19 recommendations from the Centers for Disease Control and Prevention and face masks will be provided to voters who use the free service. She said the rides are available to any city resident who requests one no matter their political affiliation. Voters in need of a ride can call (434) 266-0771.

Katina Tune, the owner of one of the two local taxi services driving voters to the polls for free this election season, said she felt a responsibility to help her neighbors fulfill their civic duty.

“A lot of people now, with this pandemic, have lost their jobs and their income is limited,” Tune, the owner of On The Go Taxi Service, said. “It’s a hard time for a lot of people, so this is about giving back to the community.”

Tune gave her first free ride to the registrar’s office to Marilyn Fisher. The two arrived in Tune’s turquoise cab and they both dutifully waited in line while wearing masks.

Fisher, who said she has never missed an opportunity to vote in an election, said she was thankful for the ride because she is about to undergo surgery and wanted to make sure she was able to cast her ballot before the procedure.

“People died so that I could have a right to vote,” she said. “I wouldn’t disappoint them for nothing in the world.”

A man convicted of several burglaries from parked cars and leading police on an ensuing chase that put several schools on lockdown will serve just under five years in prison.

AMHERST — A year after a Madison Heights man was arrested and accused of shooting his elderly father to death, questions remain on his compete…

The closure of the Franklin County treasurer's office this week resulted from two staff members testing positive for COVID-19.

Kim Conner sports a "Vote" mask as she has been the deputy registrar for 21 years in Lynchburg. (Photo by Lee Luther Jr.)

Voters had several choices on how to cast their votes, curbside, ballot drop off. (Photo by Lee Luther Jr.)