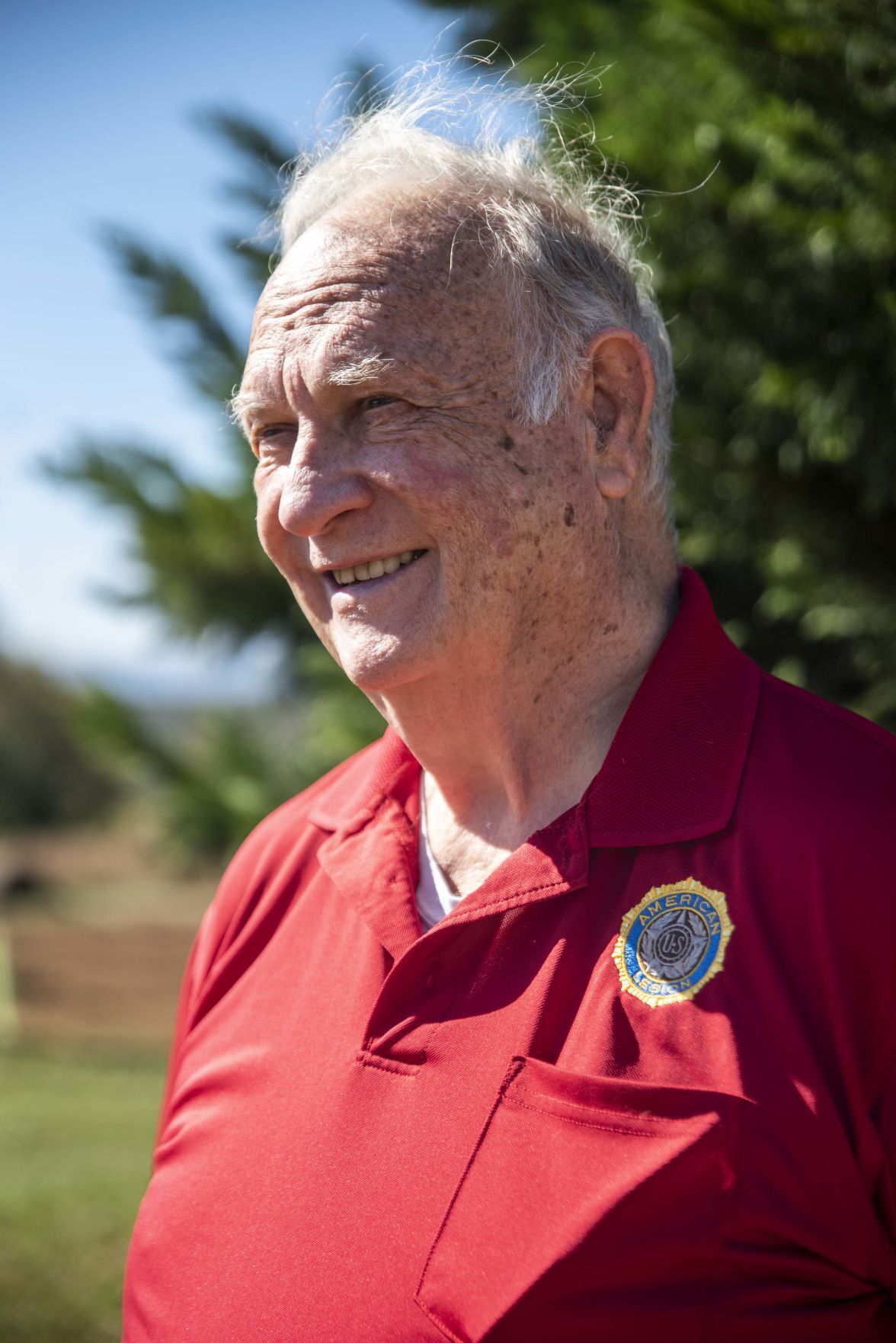 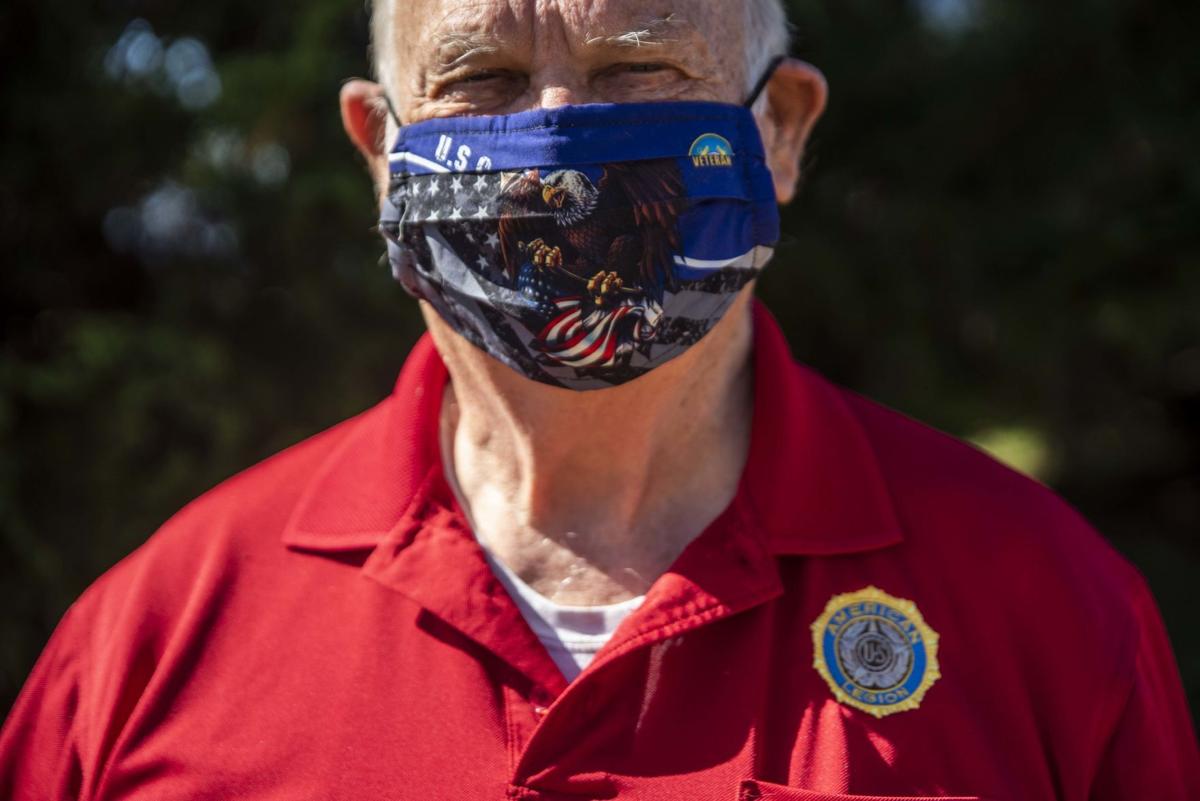 United States Navy and Coastguard veteran Thom Guthrie poses for a portrait in his Coastguard-themed mask at the Blue Mountain Barrel House in Nelson County on Wednesday, Oct. 14, 2020.

As a junior in high school, Thom Guthrie felt he needed more out of life.

“I was just tired. They didn’t challenge me,” Guthrie said. “That was one of the problems. When I was in school I was doing the advanced courses and I wasn’t challenged.”

His lack of self-fulfillment coupled with the death of a friend who was crushed by an automobile pushed Guthrie to join the military. While he knew he needed something different, Guthrie recalled the loss of his friend as another driving influence in his decision.

The day after he turned 17, Guthrie, with his mother’s signature in hand, enlisted in the U.S. Navy Reserve.

Born in Indianapolis, Indiana, Guthrie has called Nelson County home for the past 11 years. He spent roughly 30 years in the service bouncing between active and reserve duty with both the Navy and U.S. Coast Guard. Guthrie served a total of about 14 years active duty and spent the bulk of his service with the Coast Guard before retiring in 1996 as a lieutenant commander.

Guthrie said he transitioned from the reserves to active duty and went to boot camp in 1965. He was in the Navy for two years before seeing his first Navy ship in Norfolk, he said. After nearly four years active duty, he returned to the reserves as an aviation electronic technician and often traveled to Andrews Airforce Base in Maryland to fly obsolete aircraft.

Guthrie said he performed that service for the remainder of his time in the Navy and after leaving he went to work as a firefighter with the Richmond Fire Department. Guthrie previously had some volunteer firefighter training which he said he received in Southern Maryland.

A captain with one of the station’s companies happened to also be a member of the Coast Guard reserve and had asked Guthrie to reenlist, but he had no interest in going back into the service at the time.

“I said, ‘What the hell would I want to do that for?’” Guthrie joked. “I had done a year in the Naval reserve and I was driving up to Andrews Air Force Base to fly obsolete aircraft, so I didn’t want nothing to do with the reserves.”

After the initial failed attempt at recruitment, the same captain approached him again a few years later. Though he initially was hesitant, Guthrie would have no obligation to stay with the Coast Guard since he already had fulfilled his service requirements and the fire department captain had offered to make him an E6 as well; and so he accepted.

During his time in the Coast Guard and Coast Guard reserve, Guthrie said he was assigned to multiple posts and was in command of multiple units.

He eventually would reach the rank of warrant officer and became a qualified boat captain and because of those qualifications he was offered a position as commanding officer of a Coast Guard search and rescue station located in Michigan for two summers in the early 80s.

It was during this time that the station would occasionally get deliveries from U.S. Coast Guard Cutter Bristol Bay and Guthrie met a fellow lieutenant junior grade named Wayne Parent.

“I was a ship guy; I served mostly on ships. Thom was a shore guy,” Parent said. “I’m not sure I ever ran into anybody in the Coast Guard that wasn’t proud of being in the Coast Guard. That’s certainly the case with Thom and I.”

Once he graduated from high school, Parent attended the Coast Guard Academy in New London, Connecticut, and would go on to serve for about 30 years, retiring as a captain.

After several years in the Coast Guard reserve, in 1991 Guthrie said he was given the opportunity to work as a case officer with the newly formed National Pollution Fund Center in Arlington. Guthrie said he was responsible for traveling to the site of oil spills and managing the funds used to properly clean up those spills.

His office was tasked with fining responsible parties with the backing of the newly passed Oil Pollution Act of 1990 once those parties were identified.

“The magnitude of some of the oil spills was unreal,” Guthrie said, adding funds would need to be available in cases where there were no responsible parties or the party had failed to act.

Guthrie recalled when the 365-foot Tenyo Maru sank off the coast of Canada after it was struck by the 610-foot Chinese vessel Tou Hai and he was one of the case workers to respond to the subsequent oil spill.

The Associated Press reported in 1991 the Chinese ship was negligent and had failed to change course despite radio warnings. While the Tou Hai never came into United States waters, Guthrie said the oil spill had affected parts of Canada, Oregon and Washington State.

“They paid the highest fine we ever levied against any oil spiller at that time. We got a $1 million check for that. That was the limit, we couldn’t go any higher otherwise we would have because it cost more than that,” Guthrie said.

He spent the remainder of his time in the Coast Guard as a case officer and even returned to the National Pollution Fund Center after retiring. For his work with the Tenyo Maru case, Guthrie said he received one of his two Coast Guard Commendation Medals.

“I’ve had a great career,” Guthrie said. “I started off as a high school dropout, got two two-year degrees along the way, went up through senior chief petty officer, warrant officer, lieutenant junior grade, lieutenant, lieutenant commander, retired. I wouldn’t trade it for anything.”

He instead was attracted to the service because he said it’s what people are born to do.

“God put us on this earth to do something, and if you’re aiding your fellow man, isn’t that the best thing you could do? No greater love does man have for others than to lay down his life for them,” Guthrie said. “I wouldn’t be the person I am today if it wasn’t for the service.”

One injured in shooting on Lynchburg's Main Street

One person was injured in an afternoon shooting on Lynchburg’s Main Street.

UPDATE: A Lynchburg man has been taken into custody in connection with the incident.

United States Navy and Coastguard veteran Thom Guthrie poses for a portrait in his Coastguard-themed mask at the Blue Mountain Barrel House in Nelson County on Wednesday, Oct. 14, 2020.