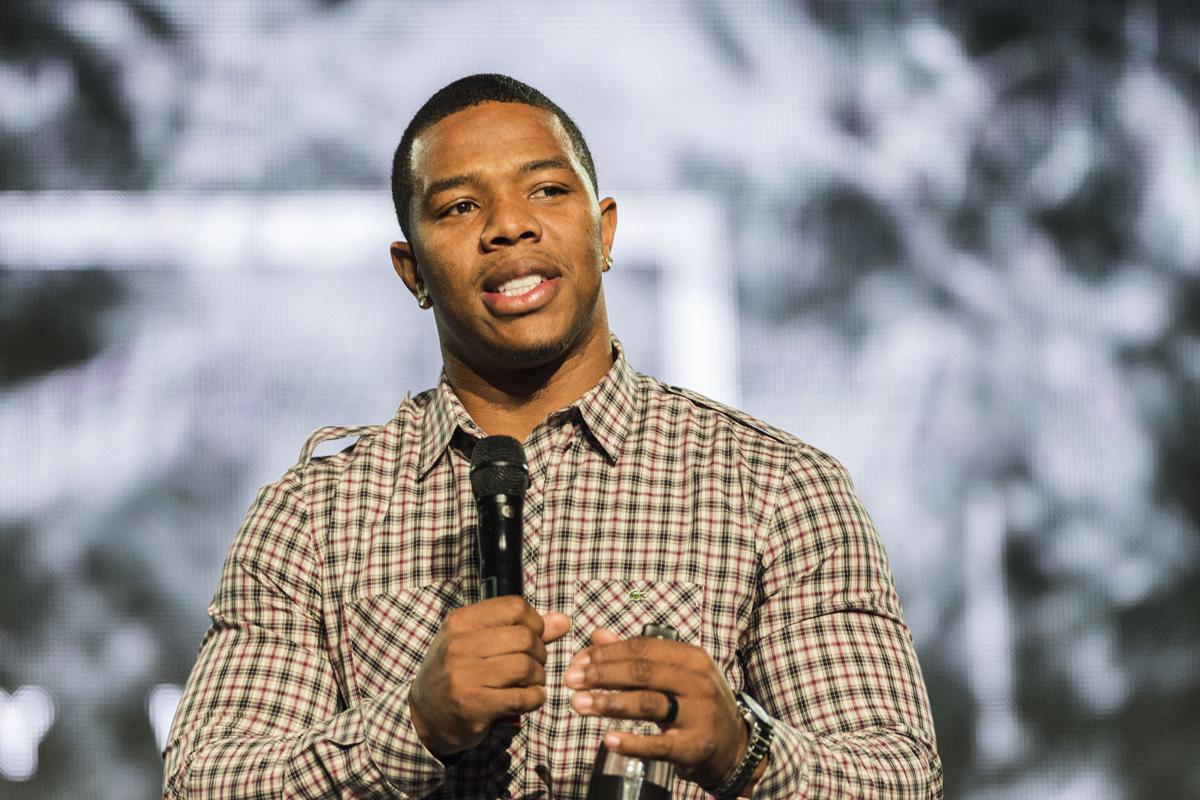 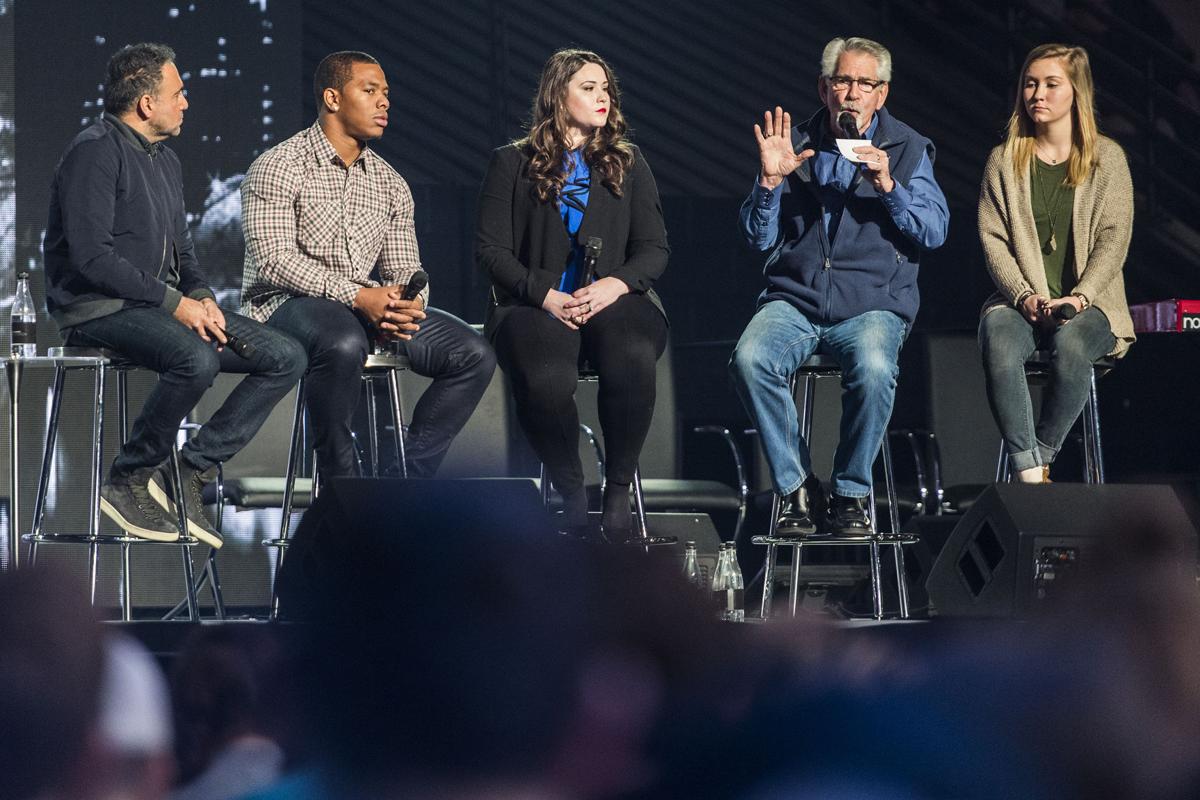 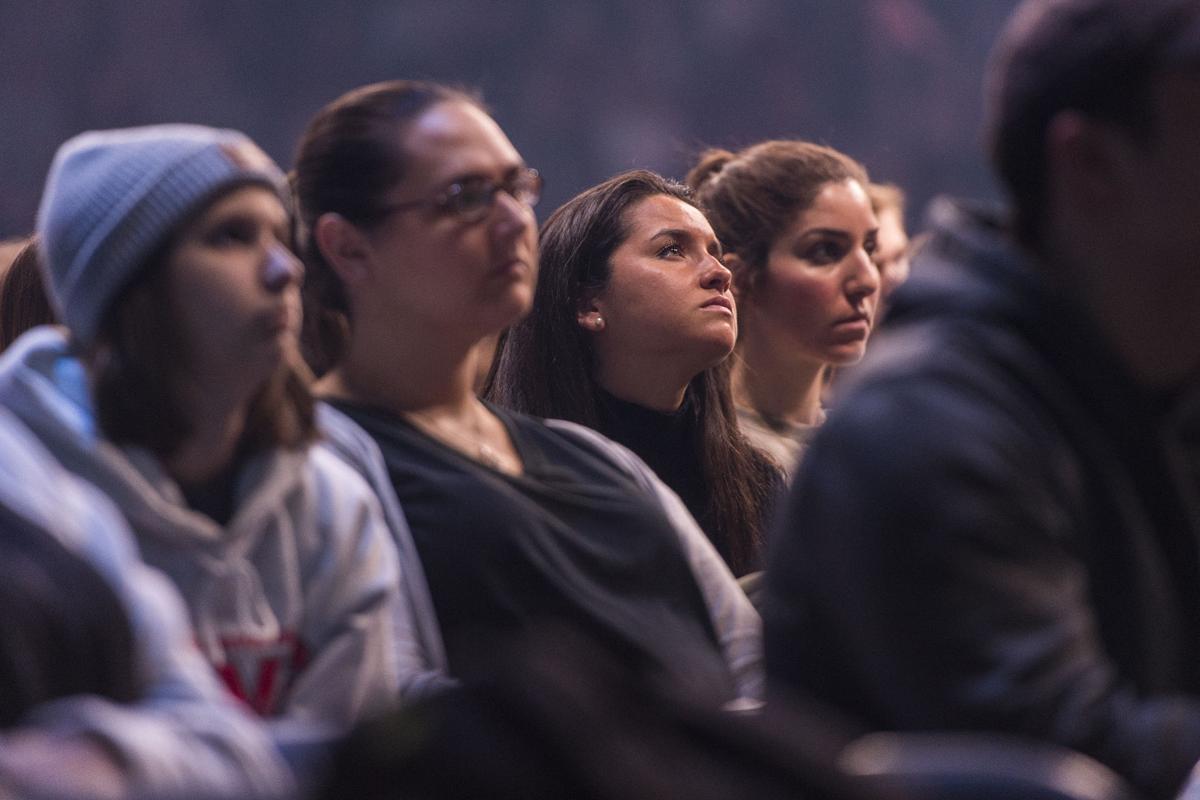 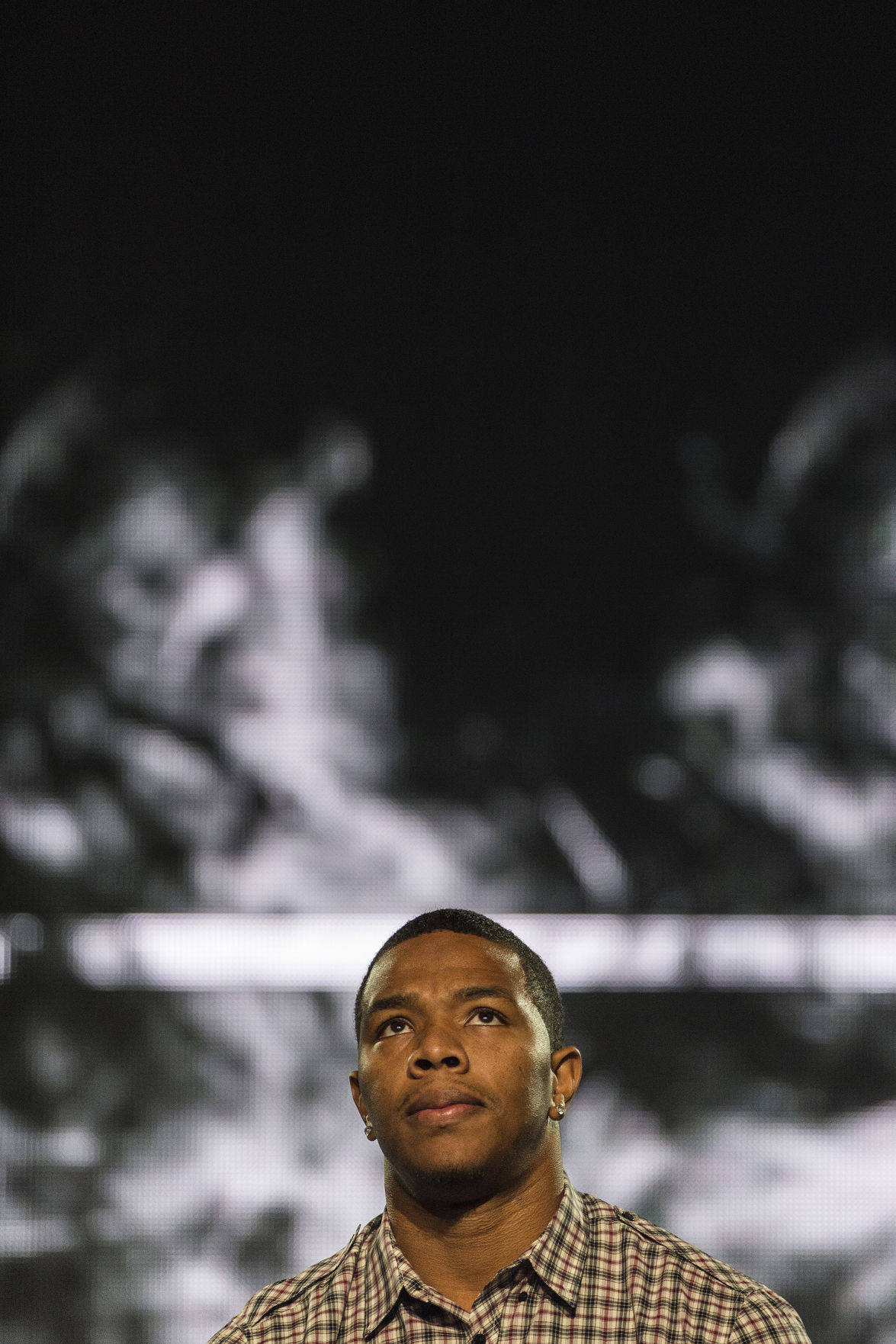 Former NFL running back Ray Rice watches a video about his history with domestic violence before speaking at Liberty University's convocation on Wednesday Dec. 6, 2017 in Lynchburg, Va. 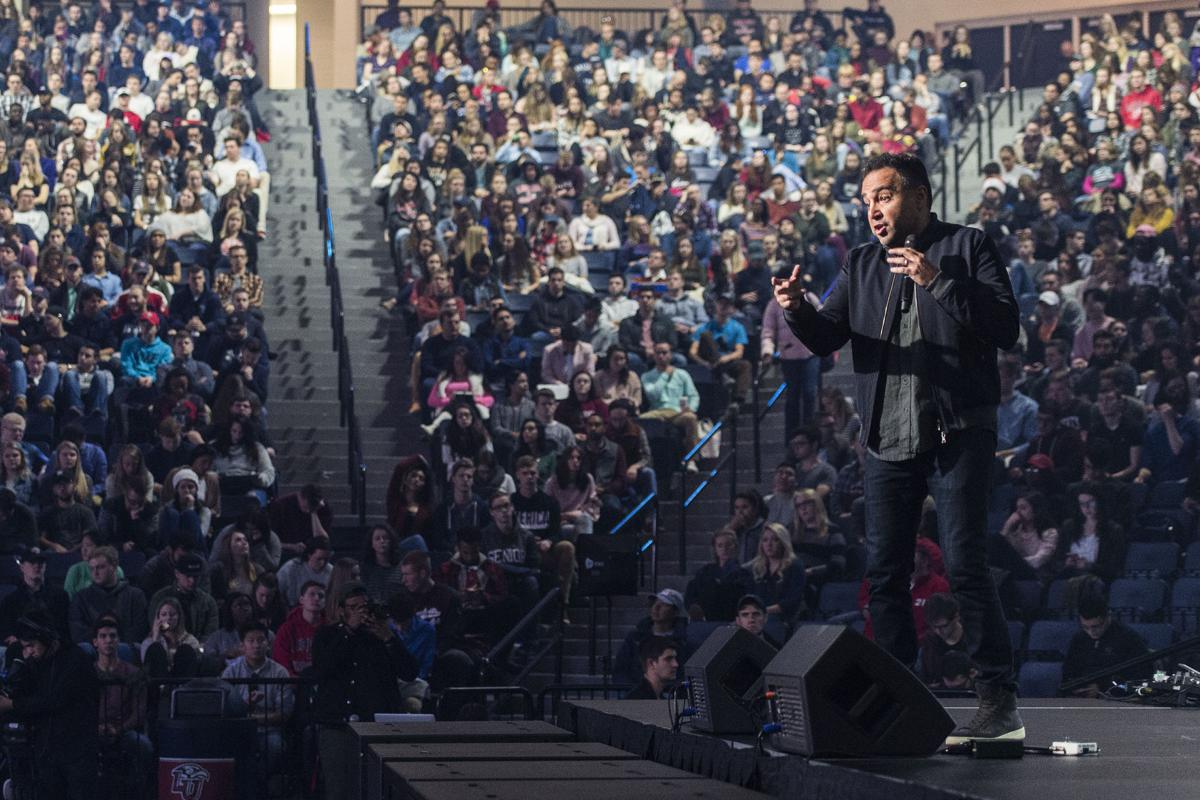 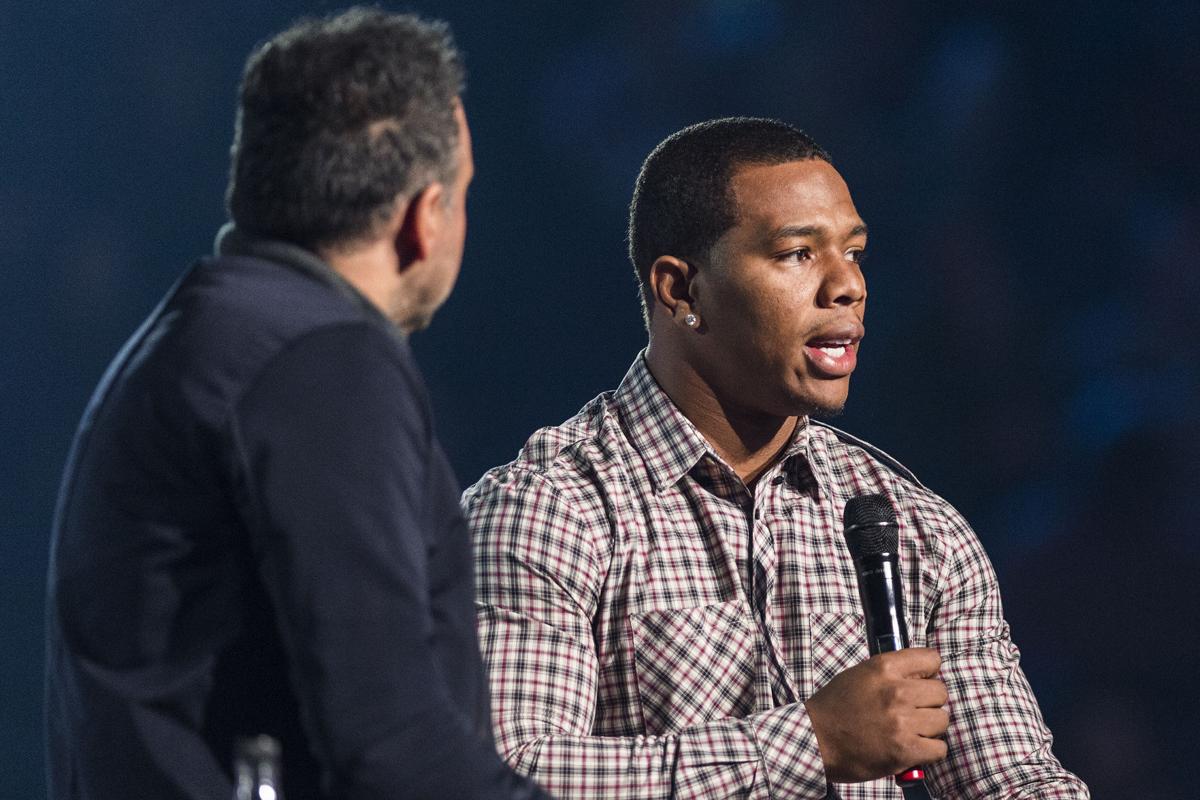 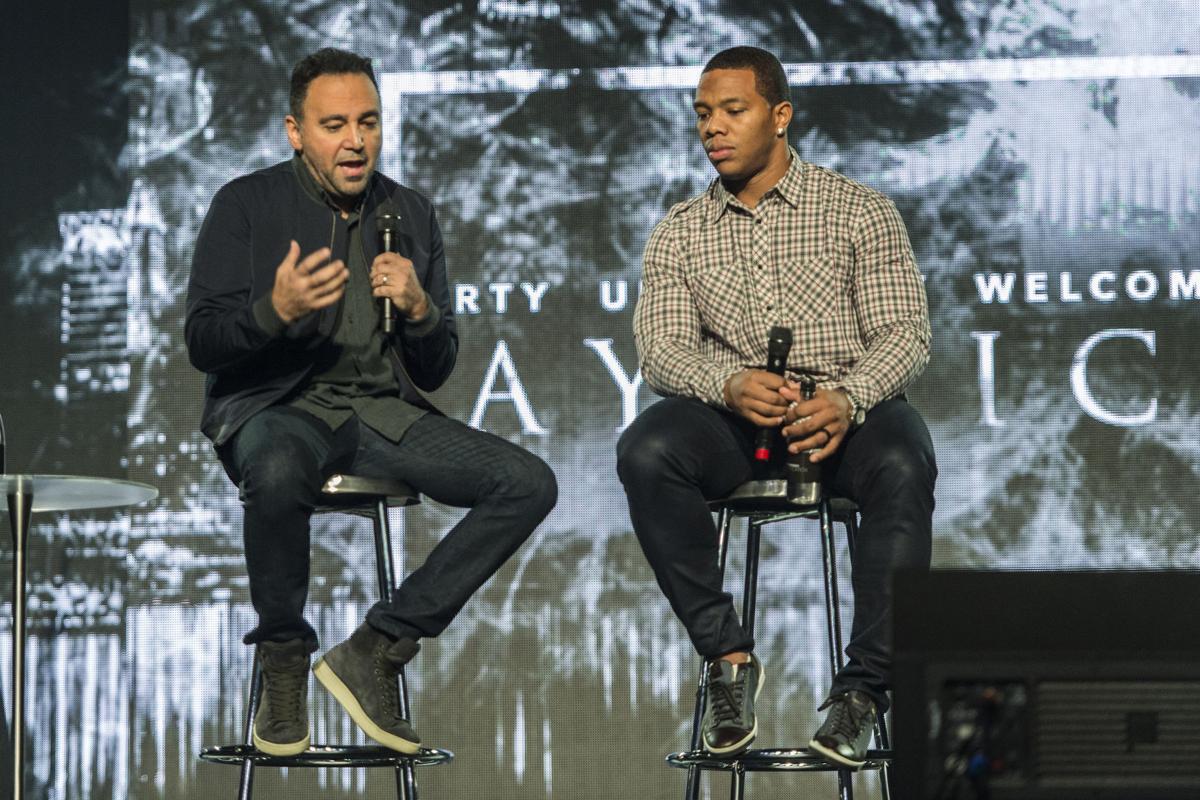 There are those who speak highly of the man who overcame his smallish stature to become a three-time Pro Bowl selection with the Baltimore Ravens.

Others, however, focus on one event that dramatically changed the trajectory of Rice’s life — an incident of domestic violence in 2014 — that has kept him off the football field as a player.

That incident and Rice’s subsequent road to rehabilitation were central to Liberty University’s Wednesday convocation that focused on the hot-topic issue of domestic violence.

“Here I am today, 30 years old, having lived a dream of being an NFL superstar, won a Super Bowl, three Pro Bowls, financially set, but I also lived a nightmare,” Rice said on stage next to David Nasser, Liberty’s senior vice president for spiritual development. “That nightmare is everything in my life that I kind of brushed up under the rug. … [The domestic violence incident] actually uncovered the brutal truth that I was actually becoming a better football player, but I was becoming a really bad person.”

Rice played for the Ravens for six seasons before the NFL suspended him indefinitely and the team released him after video surfaced of him punching his then-fiancée, Janay Palmer, and dragging her unconscious body out of an Atlantic City casino elevator in early 2014.

"Football was my go-to. Football was my medication. Once it was no longer there, it brought me to a very dark place. That was rough early on, but then I realized that I wasn’t alone. Without making any excuses, I said, ‘I am still a husband, I’m a father; there’s a lot more to Ray Rice than just three Pro Bowls and a Super Bowl."

A grand jury indicted Rice on a charge of third-degree aggravated assault. The charges were dropped after Rice agreed to undergo court-supervised counseling.

The video sparked a national debate about domestic violence and forced the NFL to amend how the league handles suspensions and penalties for players who are accused of — and charged with — domestic violence. (Rice initially was suspended for two games before the video surfaced.)

The 5-foot-8 Rice has not played since his release, even though the suspension was lifted after he successfully appealed the decision in federal court.

He has filled that time with speaking engagements across the country, and his message revolves around decision-making.

Rice spent time with Liberty student-athletes following the conclusion of Wednesday’s convocation. He has made similar appearances at Notre Dame, Ohio State, Florida State, University of Alabama and the University of Georgia since July 2016.

“I made football everything. Football was my go-to. Football was my medication. Once it was no longer there, it brought me to a very dark place,” Rice said. “That was rough early on, but then I realized that I wasn’t alone. Without making any excuses, I said, ‘I am still a husband, I’m a father; there’s a lot more to Ray Rice than just three Pro Bowls and a Super Bowl.’

“I think if you want to put that in real terms, that’s just a smidgen of who I am. I just happen to do it at a very high level. I’m willing to embrace this role as, if you want to call it the poster boy at a higher level, because I do think that what I will be doing now and for the rest of my life, scoring touchdowns won’t even come close to how many lives I will be able to save going forward. Yes, I will preach sports. Sports is a great tool, and that’s all it should be, a tool. It shouldn’t be the end all to be all.”

Nasser, who was hired by Liberty in 2014, said of the topics he wanted to have a conversation with students about during convocation, domestic violence was high on the list, along with racism, sex trafficking, world hunger and mental health issues.

“I knew that we wanted to have conversations that many times people just turn up the volume and walk away from,” Nasser said, “but we wanted to address, not just make aware of.”

Nasser and Rice spoke on stage for a little more than 20 minutes about Rice’s life — incident included — and how the New Rochelle, New York, native has spent the past three years trying to rehabilitate his image through speaking engagements and as an assistant coach this past season at New Rochelle High School.

That led into a near 30-minute panel discussion about the impact of physical, mental and emotional domestic violence and what that can do to a person. Four Liberty students (three females and one male) spoke anonymously in a prerecorded video about the challenges they faced as victims of domestic violence. Each shared a story of how they initially channeled anger and rage before turning their lives around.

“It’s shared in many forms, and it’s all forms of abuse,” Rice said.

Students in attendance initially were skeptical about Rice’s involvement with the topic, especially with the public nature in which his incident played out. However, they were willing to listen to what he had to say to see if he had truly turned the corner in his life.

“I think that his actions in 2014 are unacceptable and … I’m willing to give him a chance,” sophomore Forrest Norman, a criminal justice major, said.

“It’s very important that he gives us his message on this,” sophomore Cole Goodbar said, “that can maybe help prevent other people from having the same mistake that he had.”

Sudanese man in NYC unable to talk to family

As the next semester kicks off at Liberty University, convocation resumes with a pair of high profile speakers who fell from grace at the heig…

Megan Derstine was a fifth-grade student in Philadelphia when the city’s NFL franchise, the Eagles, made a controversial decision to sign free…

Former NFL running back Ray Rice watches a video about his history with domestic violence before speaking at Liberty University's convocation on Wednesday Dec. 6, 2017 in Lynchburg, Va.