Fox News commentator Tomi Lahren talks feminism, free speech and more at LU
Share this
Only $5 for 5 months
1 of 15 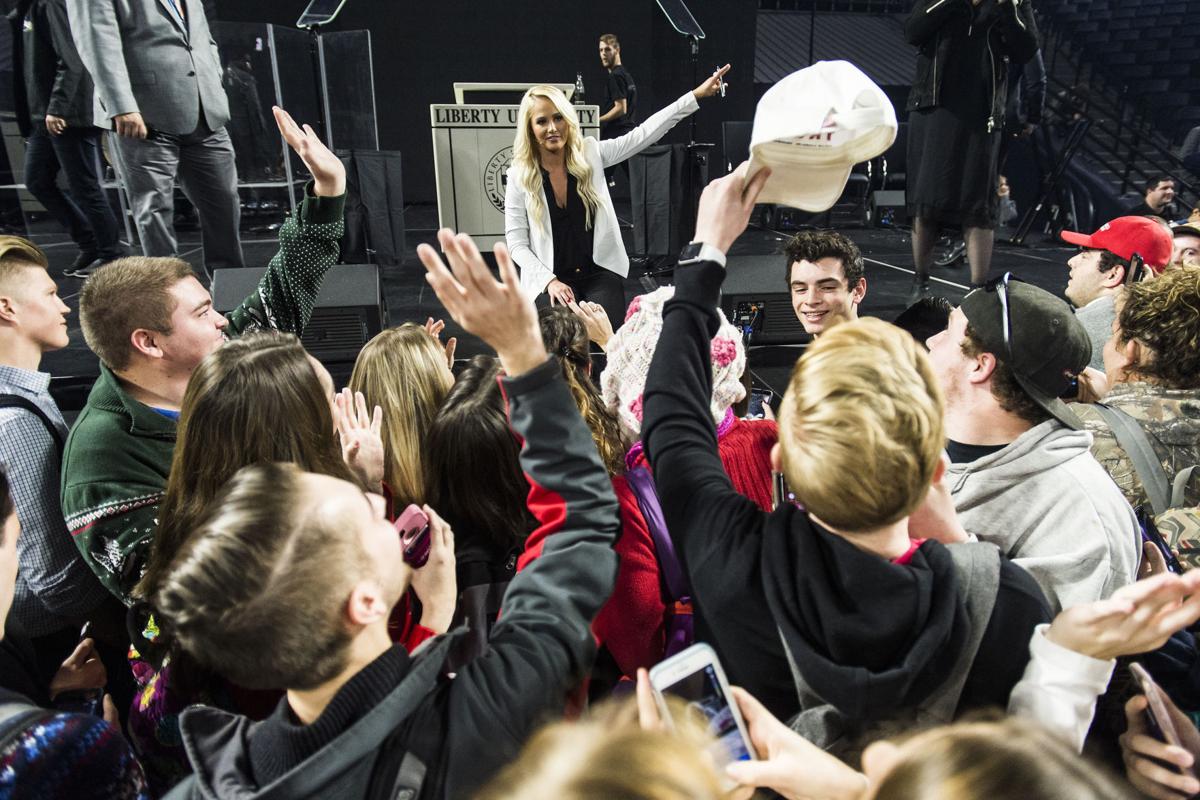 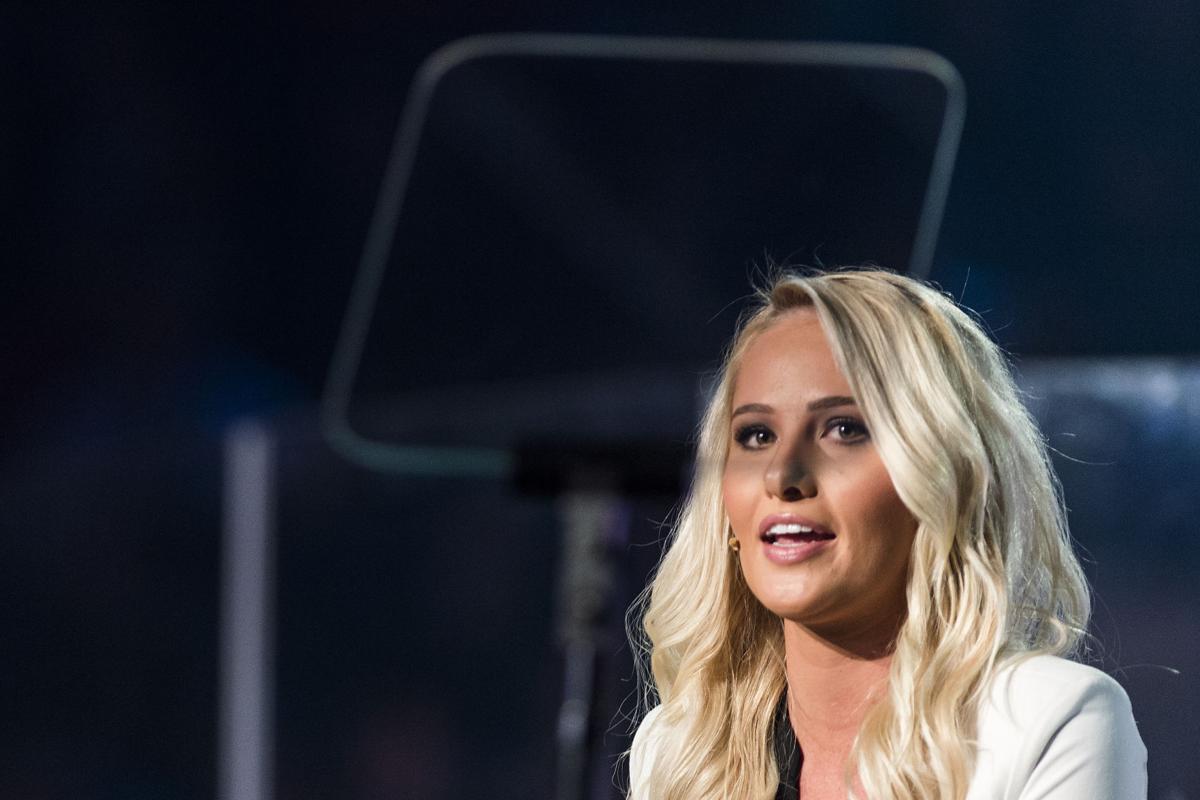 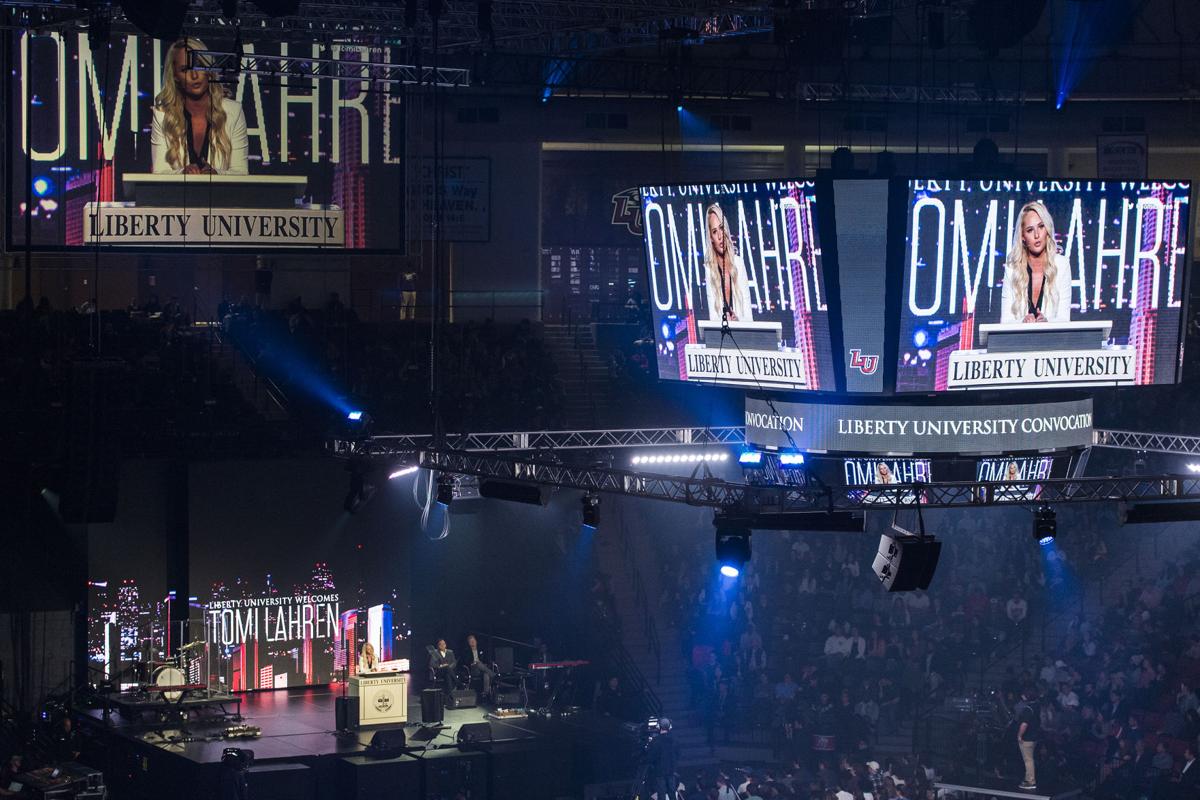 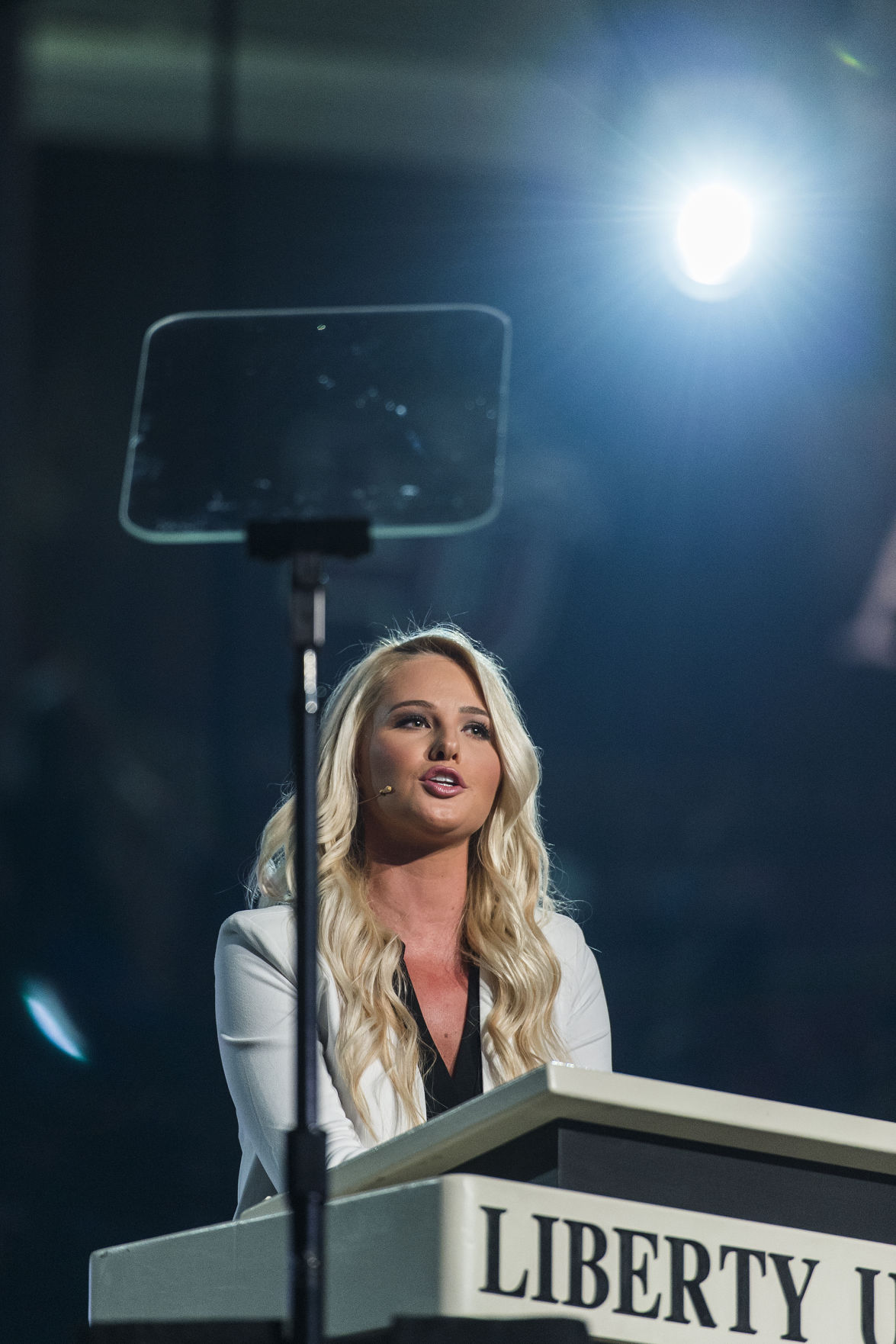 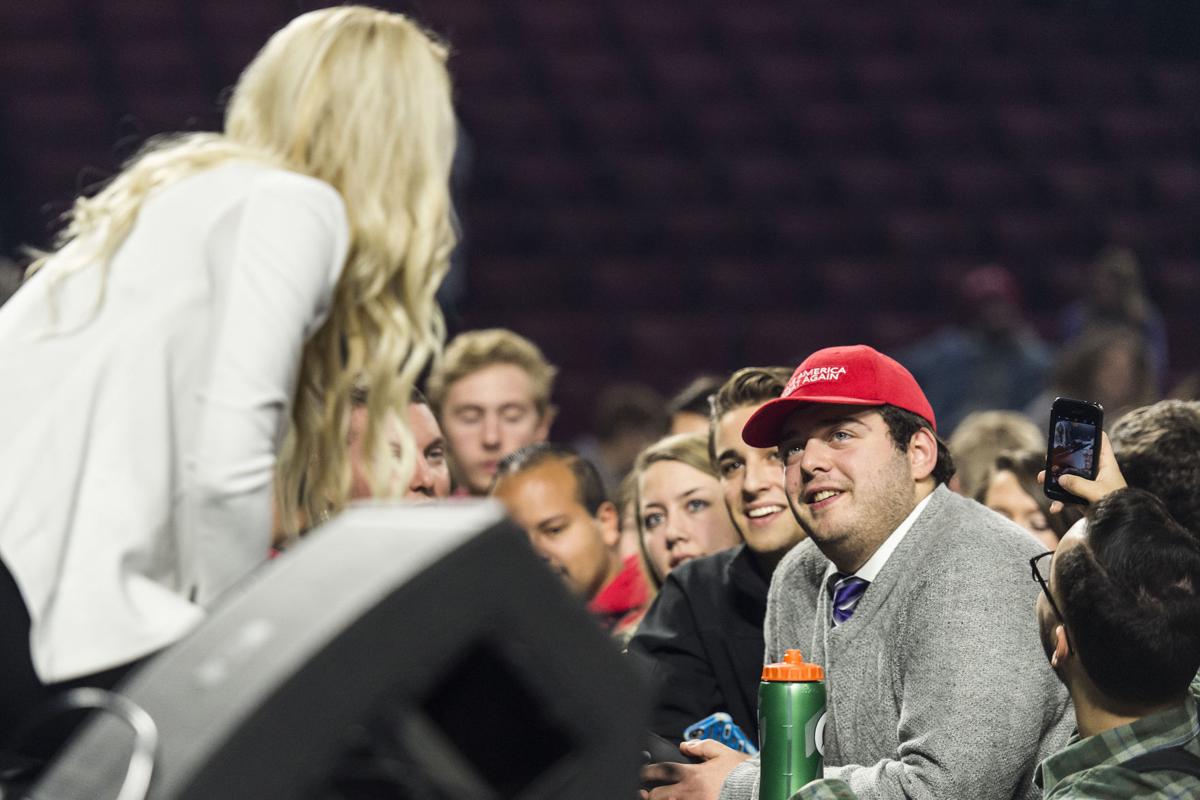 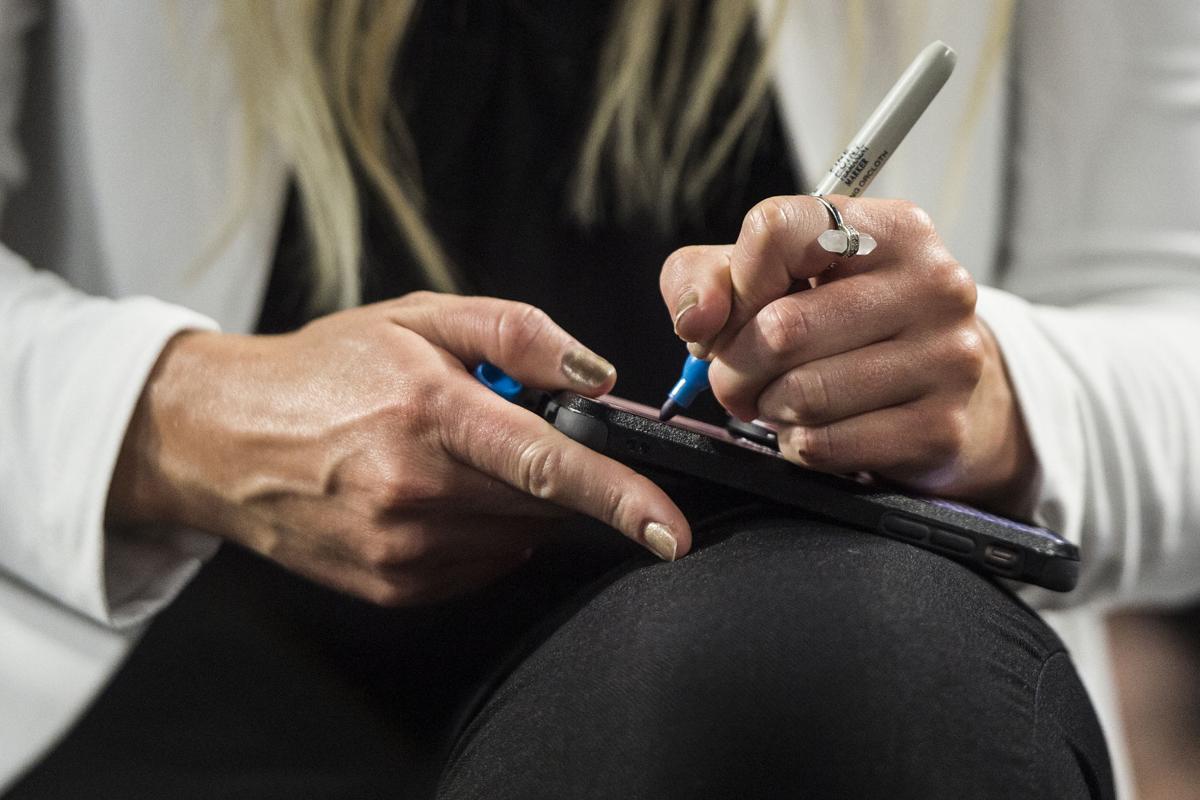 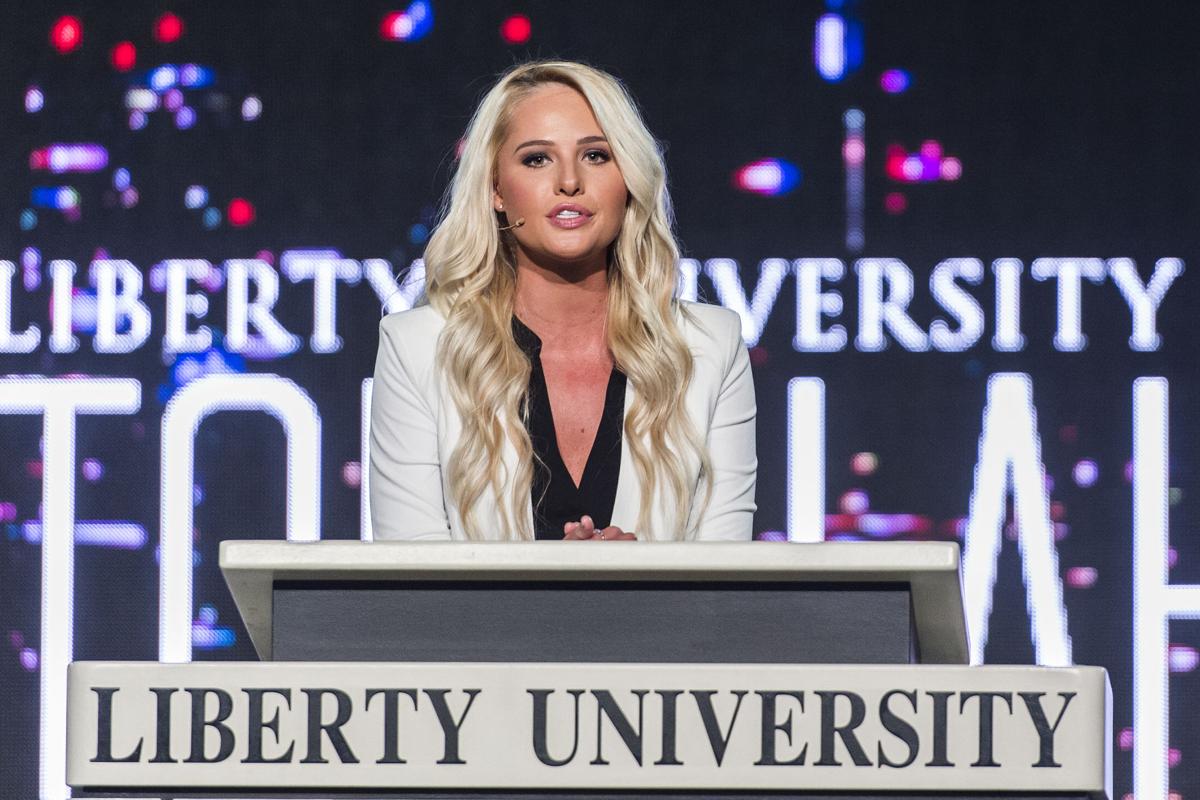 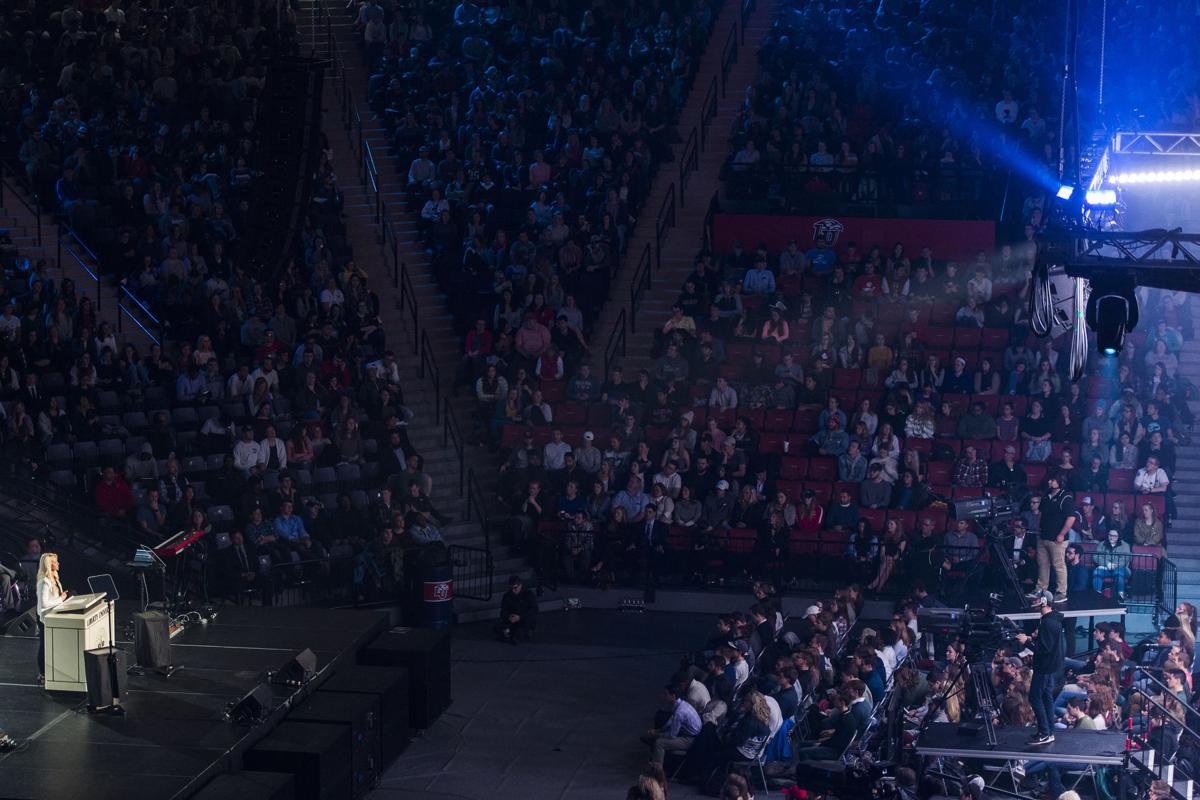 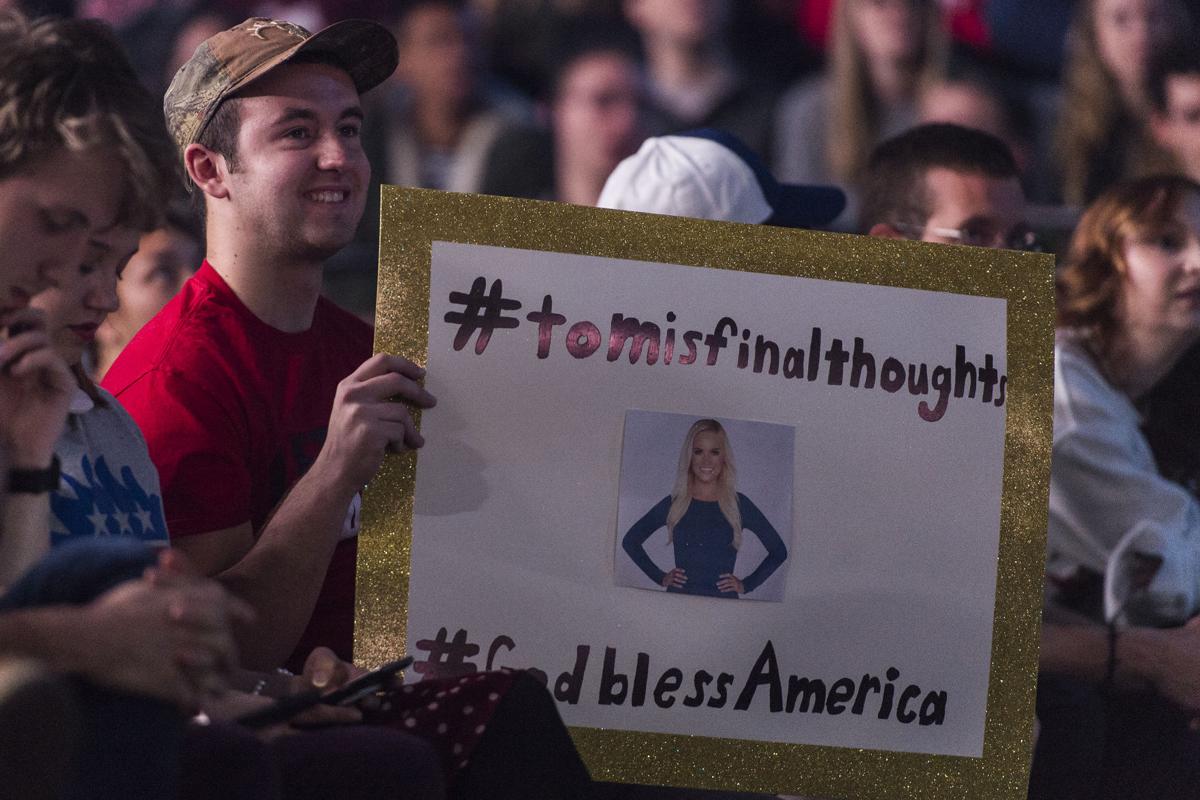 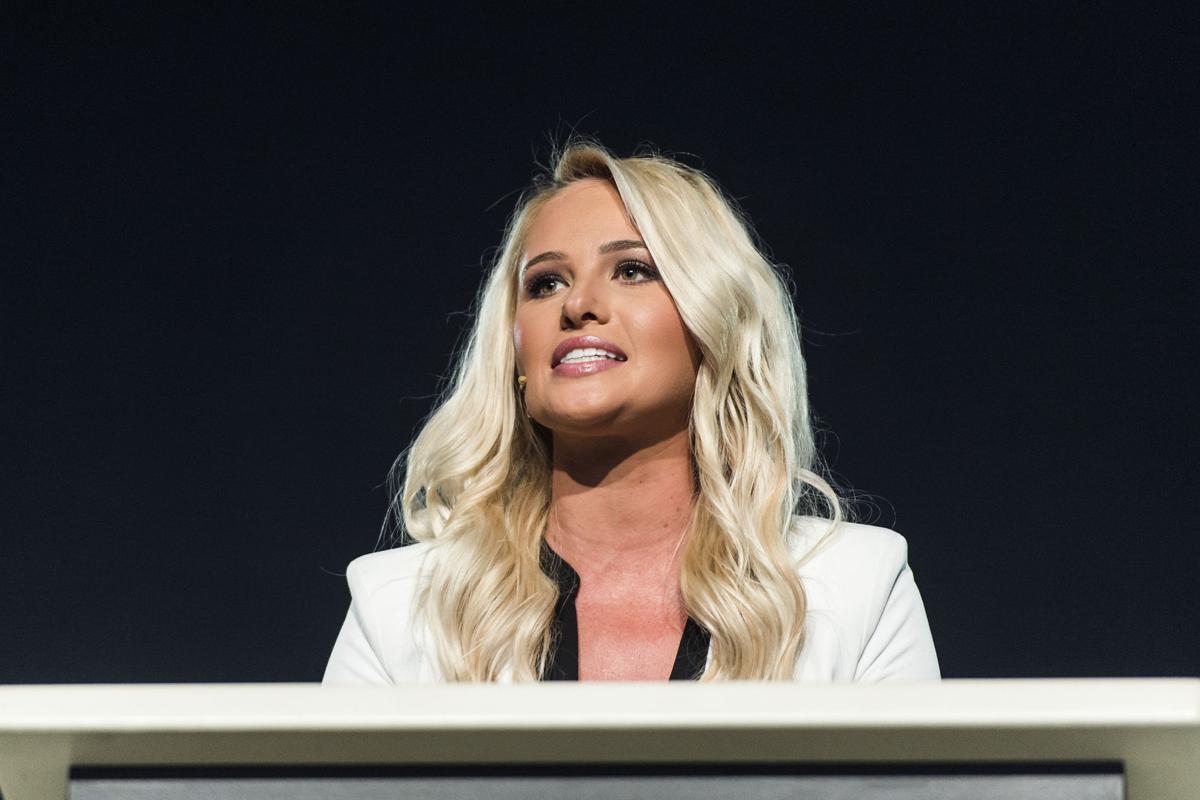 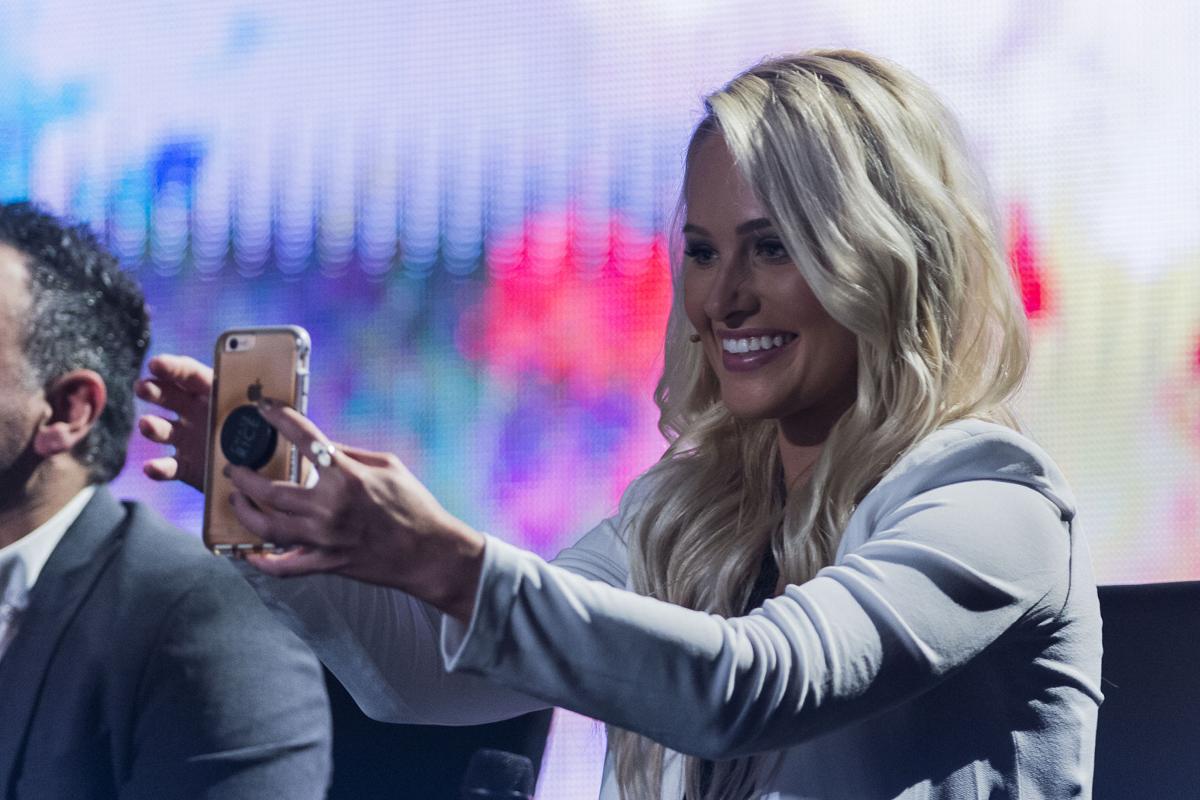 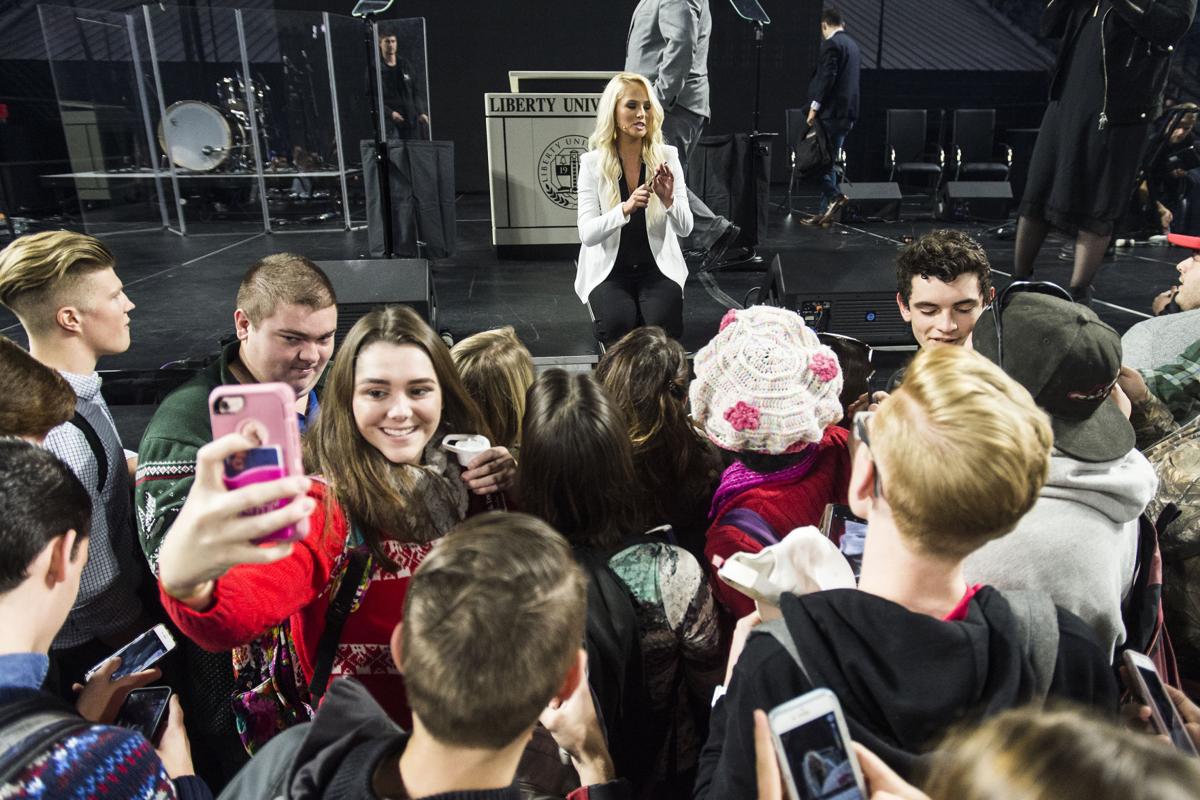 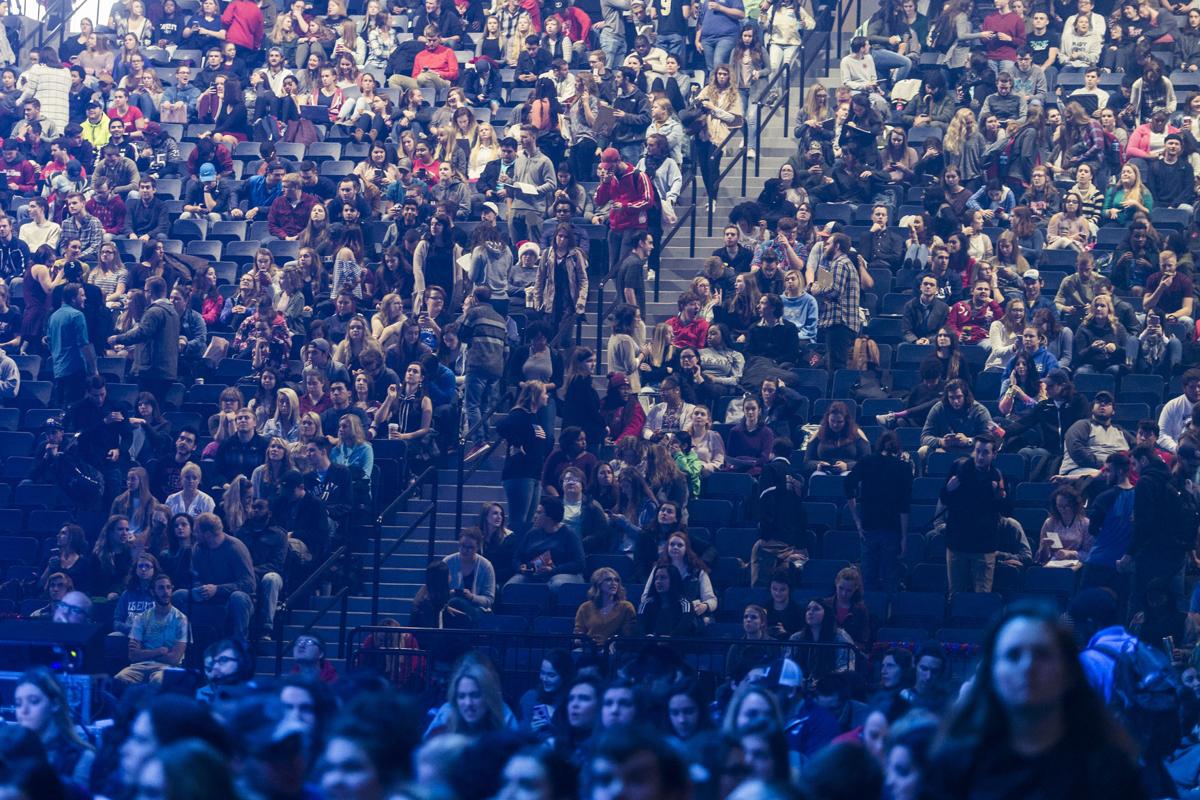 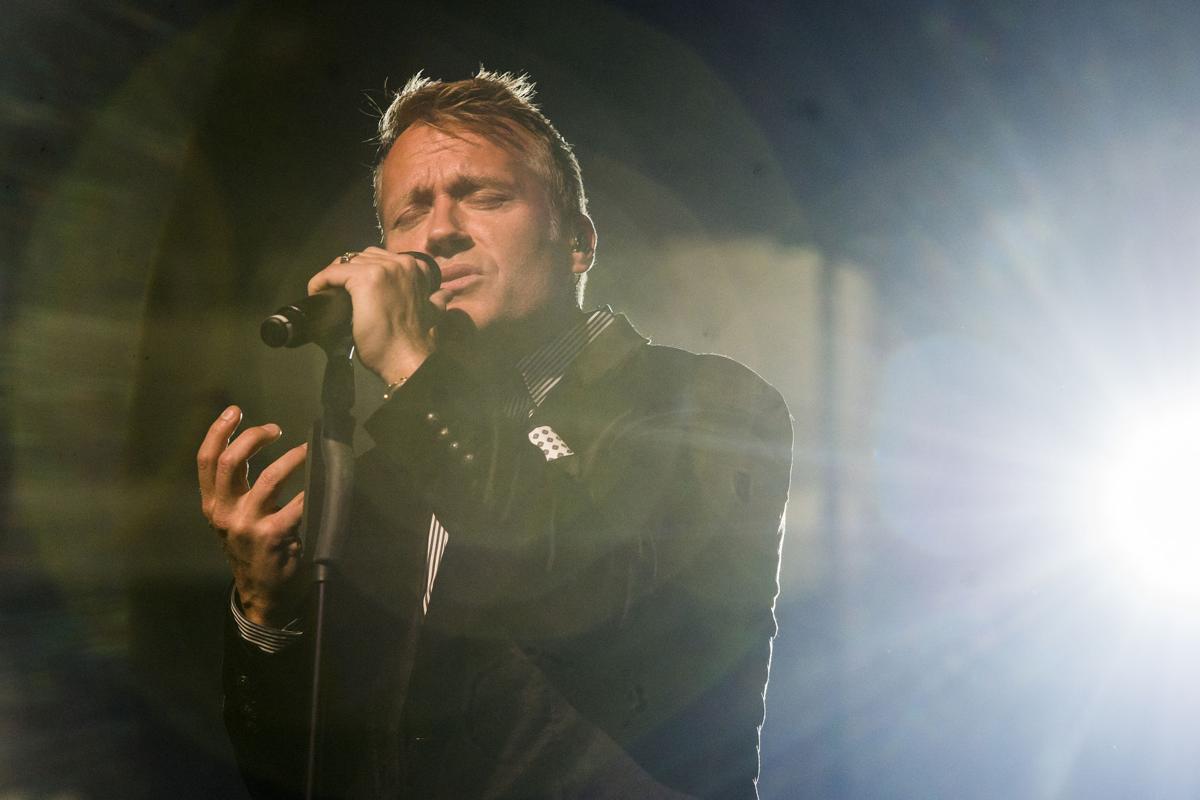 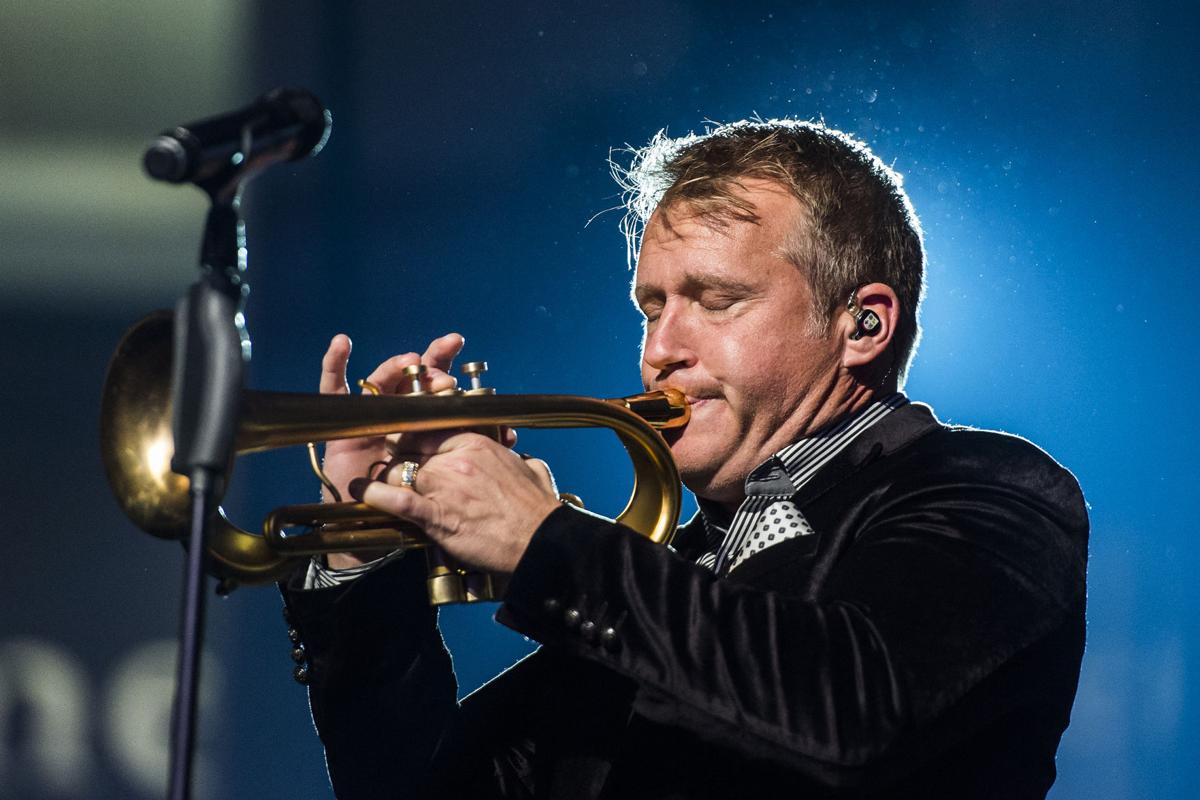 Conservative political commentator Tomi Lahren was on brand Monday at Liberty University, where she took swipes at liberals, media, feminists and men who “identify as mashed potatoes.”

Lahren, a 25-year-old Fox News contributor, is known for her brash political commentary and her “Final Thoughts” video segments where she weighs in on topical and controversial political issues.

Lahren said students should remind themselves of three things to recognize the country is on the right path.

“Number one, you live in the greatest nation on the face of the Earth. Number two, Donald J. Trump is your president … and number three … Hillary-Rodham-email-deleting-Benghazi-lying-sham-foundation-crooked-Clinton is not,” Lahren said to loud applause from the audience at Liberty.

Throughout her speech, Lahren emphasized the importance of freedom of speech, noting her criticism of former NFL quarterback Colin Kaepernick, which has circulated widely online. She said while she supports his right to kneel in protest of social-justice issues, she also has a right to criticize him.

“Just because you have the right to free speech doesn’t mean that those around you can’t question it or challenge it,” Lahren said, adding, “We stand for the Stars and Stripes.”

Lahren, who regularly rails against those with whom she disagrees politically, also emphasized the importance of having conversations about politics and religions with those of different mindsets.

“What we should be taught is how to have a civil conversation about a difficult topic,” Lahren said.

In the same speech in which Lahren emphasized having civil conversations, she also joked about Bernie Sanders supporters not bathing and criticized “modern-day feminists,” claiming they have hijacked the equal rights mantra and turned feminism into hating men, Trump and “demanding free stuff.”

“This whole feminism charade is a farce. It’s not about female empowerment; it’s about patting liberal women on the back while simultaneously mocking conservative women for everything from our looks to our intelligence,” Lahren said.

Lahren also took aim at restrictions on the right to bear arms outlined in the Second Amendment.

“She shares very good moral principles that are based around the conservative viewpoint,” Orlandini said.

Other students, such as sophomore government major Ian Parish, expressed dissatisfaction Lahren is another in a long line of pro-Trump speakers that have been booked for convocation.

“What we see here is [LU President] Jerry Falwell Jr. and the religious right saying, ‘Hey, we’ve got Trump’s back.’ I don’t think we should be putting that out as a school, as an administration, because our first duty is number one, to represent Christ, and number two to represent a Christian worldview to the rest of the United States and the world. I don’t think [convocation] should necessarily be focused on Trump at all, and the fact that we do focus this on Trump is sad, quite frankly,” Parish said.

He added he would like to see conservative speakers such as Ben Shapiro, a conservative political commentator and columnist, speak at Liberty.

“I think her speech reflects the feelings many middle-class Americans feel today. She’s popular with her audience, and it’s easy to see why. She’s able to articulate her points in a way that many Americans resonate with, and I think it encourages many to get involved and speak up,” Price wrote.

She added she is disappointed Lahren has expressed pro-abortion rights views in the past.

“Her pro-choice views stand in stark contrast of what she claims are her core values: faith, family, and freedom. I always say that if an unborn child does not have a right to life, then all other rights are an illusion,” Price wrote via social media.

Prior to Lahren’s appearance, numerous LU students shared their discontent with her stance on abortion. Lahren, who is pro-abortion rights, did not broach the topic at Liberty. In an interview after her convocation address, she said students already know her stance on the issue.

Lahren added conservative Christians may not always align on every political issue.

David Nasser, LU’s senior vice president for spiritual development who is responsible for scheduling convocation, said Lahren has been a frequently requested speaker by students.

Lahren’s convocation address kicked off a week where students will hear from former NFL running back Ray Rice, who was famously caught on camera punching his then-fiancée in 2014, and the trio of Corey Lewandowski, David Bossie and Steve Strang. Lewandowski and Bossie previously were Trump campaign officials and recently released a book about that experience. Strang also has written about the president’s faith and is the author of the book “God and Donald Trump.”

Rice will speak Wednesday, and Lewandowski, Bossie and Strang are scheduled for Friday.

Convocation is held thrice weekly, and attendance is mandatory for residential students.

As the next semester kicks off at Liberty University, convocation resumes with a pair of high profile speakers who fell from grace at the heig…

Megan Derstine was a fifth-grade student in Philadelphia when the city’s NFL franchise, the Eagles, made a controversial decision to sign free…

‘Add your phone to the COVID fight’: Virginia rolls out new app to alert people of possible coronavirus contact